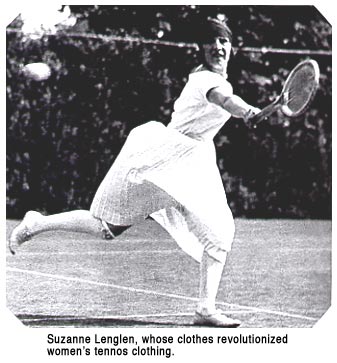 From corsets and long skirts to cat suits, gladiator boots and cleavage, the fashionistas of women’s tennis have historically made clothing a spectator sport created in marketing heaven. Historians try to tell us that a game resembling tennis was originally played by the ancient Egyptians but it’s difficult to imagine Cleopatra going for an overhead without being toppled by her ornate gold headdress while kohl eyeliner seeped into her eyes.

In the late 1800s when someone called “tennis anyone?” on the manicured lawns of Victorian England, the invention of Lawn Tennis demanded a civilized tennis costume for women. Maud Watson raised eyebrows and won her first Wimbledon Singles Championship in 1884 wearing an ankle-length white corseted dress and bustle with a sporty man’s straw boater hat.

However, tennis fashions really took off after the first World War when Frenchwoman, Suzanne Lenglen (blame it on the French they’re always so chic,) flitted onto the courts in a fur coat under which she sported a delicately pleated silk chemise, sans corset, designed by couturier, Jean Pateau, matching turban or bandeau clasped with a diamond pin and white silk stockings held in place with small French coins. Very soon the ‘Lenglen Bandeau’ became all the rage for stylish women off the court too. Needless to say, her appearance was so bizarre and shocking that Wimbledon had to move to larger grounds in 1922 to accommodate the crowds.

“Everyone knows the gossip about American Gussie Moran, who scandalized the tennis world by wearing the first lace-trimmed knickers at Wimbledon in 1949,” says Wimbledon Lawn Tennis Museum curator, Honor Godfrey by phone. The Museum has the largest collection of women’s tennis costumes in the world dating back 125 years. “Though accused of ‘bringing vulgarity and sin’ to the game, she became an instant sensation and was quoted by the London Daily Express as saying “After the lace panties, everyone was always staring to see them and I couldn’t concentrate on tennis!”

Not to be outdone by the French, the dashing Ted Tinling a former umpire and superb tennis player turned designer, created the first colour trimmed dress for a member of the British Wightman Cup team. When the American team objected, Wimbledon acquiesced and came up with the first all-white clothing rule. A decade later he was at the centre of another controversy when his gold lamé panties designed for Karol Fagero were banned before she ever made it on the court at Wimbledon. Andrew Jarret, assistant referee at the All England Lawn and Tennis Club (Wimbledon) says that “There’s always been an almost entirely white clothing rule at Wimbledon – it’s our tradition. Colour linings and trims are more acceptable now. Although the manufacturers try to bend the rules no one wants problems. It’s the last thing a player wants to do- they just want to focus on their game.” 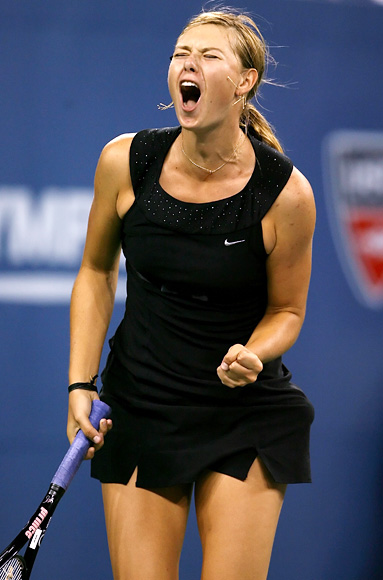 It’s interesting to note that by 1922, although Suzanne Lenglen and Ted Tinling were still considered amateurs on the tennis circuits, both players received “expenses” from unnamed sources that contributed to their flamboyant attire on court and marked the birth of the marketing endorsement.

The 50’s and 60’s saw the advent of man-made fabrics and drip-dry tennis clothes that were now a reality. In the 70’s, when even Mattel Toys’ Barbie sported an all white tennis dress (albeit miro-mini) many people felt that the glamour had gone out of women’s tennis clothes: Chris Everett and Evonne Goolagong were still wearing tasteful, feminine tennis dresses designed by Ted Tinling with practicality usurping trendy. When clothing manufacturers actually realized that women sweat too and needed to wear fabrics that breathed and not just stimulate heavy breathing, short skirts with smart little sports shirts and small sponsor logos became the prevailing style.

Winning the vote, women’s emancipation and equal rights whether in Victorian times or in the 70s was always reflected in fashions both on and off the court. When Billie Jean King beat Bobby Riggs in their infamous 1973 battle of the sexes, she wore a mint green dress with royal blue inserts embroidered with rhinestones and sequins in a “VS” design.

Well before the Williams sisters were a gleam in their parents’ eyes (or in jeweler Harry Winston’s $29,000 nine carat diamond bracelet, that Serena would one day wear as an endorsement during the 2002 U.S. Open), Anne White made her name in the 80’s when she wore the first all-white, full-length, figure-hugging bodysuit at Wimbledon. Her match was postponed until the following day and she was asked to change her clothes. Although she lost the match, television made her outfit a world-wide commodity. 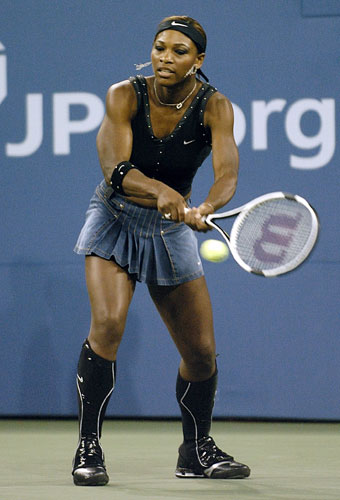 Which finally brings us to the reigning tennis fashion plates, Serena and Venus Williams and Maria Sharapova who have multi-million dollar clothing endorsements as well as their own lines. The latter, sadly sitting out the 2016 U.S. Open over drug charges, put ‘the little black dress’ studded with crystals on the court in 2006 with the elegant design by Nike.  Linda Long, Apparel and Marketing Manager for Puma, traveled with Serena Williams for four years and said by phone from the French Open, “Contrary to what the public might think, Serena does not just walk onto the court in these controversial outfits. We have to submit designs six months ahead to all the tournament directors. We’re given guidelines but I’m the first one to admit that there are grey areas. The black cat suit that looked like it had been airbrushed onto Serena’s curves, received so much international media coverage at the 2002 U.S. Open, it must have fallen into one of those grey areas.

“We saw the design ahead of time and passed it, admits U.S. Open Tournament referee Brian Earley. But it didn’t look quite the same on paper as when Serena walked on the court wearing it! Frankly, I was a little surprised at first, but I liked it. Everyone knows that the U.S. Open is the most liberal of all the Grand Slams. I like when people push the envelope – a little bit anyway.”

And while the more outrageous women’s tennis fashions have been greatly toned down in the last few years, look for stunning colors and architectural prints from Aidas’ Adizero Women’s Collection at the 2016 U.S. Open. Pushing the envelope is what manufacturers do best. Debuting specific outfits at the Australian, French and U.S. Opens that are guaranteed to garner maximum media coverage and spectator buzz sending sales sky-rocketing, is the name of the game.