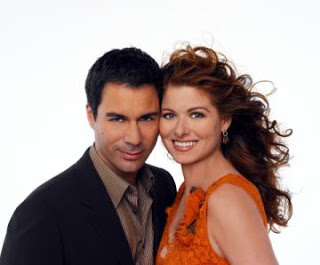 The New York Times is calling it “Guy Decor”. Television shows about single men are not new but guys with great decorating panache (or the money to hire someone that does) is the hottest trend on the box. Though it’s difficult to compete with Frasier’s impeccable aesthetic, Will & Grace, starring Canada’s Eric McCormack with Debra Messing as his neurotic roommate, may be the hippest contemporary Odd Couple to ever share fabric swatches.

He is a successful New York lawyer who happens to be gay; she is an interior designer. Together sparks fly, but not in a romantic sense and there is a twist: Their tony, upper East side apartment is exclusively Will’s taste.

“We’ve seen what happens when lots of characters move in together on a show. It’s just a jumble of stuff, ”says Melinda Ritz, the set decorator for the hit NBC comedy. “This started out as Will’s apartment – it’s his vision because he lived alone and we didn’t want Grace’s strong, over the top character to also take over the design and furnishings.” So except for adding flowers and changing pillows and books, Grace’s decorating flourishes take flight in her office studio only.”

Starting with the concept that Will’s character was a well-read, world traveler with an innate sense of style, Ritz created a monochromatic, masculine look for the apartment using blues, black and rich dark wood to give an understated but sophisticated and very modern feel. Mahogany trimmed glass French doors and wooden encased transoms add an elegant airiness to the apartment. A charming glassed-in terrace reminiscent of an Old World artist’s studio adjoins the living room. “I wanted the rooms to have the appearance of a European apartment meaning a mixture of architectural elements, antique finds and multicultural pieces such as the antique kilim area rugs, ”explains Ritz.“ European casualness is in vogue now. In Europe, furniture is not so dispensable as it is in North America and furniture is slip covered as the seasons change.” 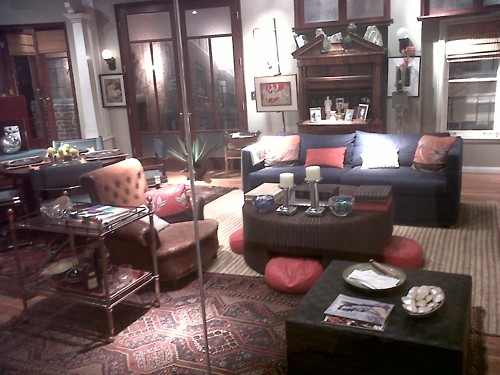 A stunning blue marble fireplace is the focal point of the intimate living room seating area and both it and the small library alcove showcase a series of objects d’arts.

“I am very conscious that a lot of the art represents phallic symbols and fertility gods (one painting is so subtle that you have to look extremely close to see the dancing condoms,) but this is in keeping with Will’s character and is as gay as it needs to be without being a cliche,” Ritz explains.

Whether Grace’s designing talents will be more apparent on the home front when the show finishes this second season, the producers and writers won’t predict. For now, she has the good grace to let Will do the decorating!