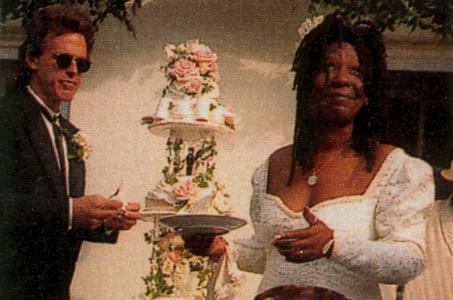 “I was approached in a parking lot, offered incredible amounts of money in bribes, followed home and had people calling me day and night on my unlisted telephone number, but I wouldn’t sell out.”

While this may sound like the confessions of a character from a spy novella or an overwrought guest on Oprah, truth really is stranger than fiction for Canadian bridal designer Kim Ironmonger who spent five nerve-wracking weeks dodging the media while creating a wedding gown for one of Hollywood’s most popular yet unpretentious celebrities – Whoopi Goldberg. She was married October 1 to movie union organizer, Lyle Trachtenberg.

For almost a decade, brides who traverse the world in search of that elusive fantasy of what they most desire for their wedding gown, have discovered Ironmonger’s Valencienne Bridal Design, a charming Toronto salon, whose exquisite collection of gowns in Thai silk, taffeta, French lace, duchesse satin brocades and tulle, hand-beaded with real pearls and Austrian crystals, reflect the fairy-tale quality of period costumes.

By coincidence, costume designer, Denise Cronenberg, (sister of Canadian filmmaker, David Cronenberg), who happened to be walking by the store, was so taken with the romantic theatricality of the wedding gowns, that she referred Valencienne to Goldberg. The two were working together on the film, Moonlight and Valentino, shooting in Toronto.

“When Denise’s assistant called me up to arrange an appointment for a mystery ‘celebrity’, I was swamped with brides and couldn’t fit her in that day,” admits Ironmonger, whose blunt, extroverted demeanour is the complete antithesis of her creations. “We finally decided on 8:00 a.m. the following morning,” she continues, “ and when I found out the celebrity was Whoopi Goldberg I freaked out. I stayed up until 2:00 a.m. cleaning the store, putting bonbons in candy dishes, arranging fresh flowers,” she laughs, “and then, the appointment changed several times after that because of Whoopi’s shooting schedule. When Denise finally brought her in (they walked down from the Four Season’s Hotel), I thought, ‘I’d love to do a gown for her but even if she just puts her foot over the threshold, I’ll “be happy.’ When Whoopi came in she was very laid back and kind of quiet at first. After she looked around, she said ‘girl, why the hell aren’t you in L.A.?’ I burst out laughing and I knew we were going to hit it off!”

Although Cronenberg and Goldberg had initially discussed a sheath-like kimono style for the wedding gown, Ironmonger felt that the actress was not entirely convinced:

“I wanted to be very careful, and just step back and listen to Whoopi’s ideas. But, I know I’m very out-going and a little loud and ultimately, can’t keep quiet and I thought I can’t just stand here with my mouth shut any longer – I have to get involved!” Ironmonger laughs uproariously. “I handed Whoopi a piece of paper and said just draw what you have in mind. She was having a really difficult time describing the colour she wanted. After she finished, my seamstress Sonia and I just looked at each other in disbelief. I said ‘that looks like Sylvia’s dress.’ (“We had just completed a gown for another client.”) Whoopi said, ‘Well where is this Sylvia, I want to meet her!’ When we brought out the dress, she screamed, ‘that’s the colour I want.’ ”

“From then on,” relates Ironmonger, “ Whoopi was so funny, it was like having our own comedian in the shop for three hours. And I just relaxed and joked around and didn’t treat her any differently than I treat all my brides.”

The very next day, Ironmonger recalls, she began getting intimidating phone calls from paparazzi who said they were affiliated with People Magazine,The National Enquirer and from reporters from the television show Hard Copy, all demanding to know if Goldberg had purchased the dress at the shop and what the design looked like.

“I had to increase security at the store, and designs for the gown were put in a vault behind two locked doors,” says Ironmonger. “Photographers began hiding out in the park in front of the shop with wide-angle lens to try and get anything on the gown for world-wide syndication before the wedding. It was really spooky.”

Few people may realize that the 30-year old dynamo who opened Valencienne over nine years ago, is completely self-taught. Inspired by the romantic British bridal collections she saw as a buyer on a trip to England in 1985, Ironmonger was convinced she could bring them to Canada and eventually, design many of them herself. Named after the Flemish town of Valenciennes, famed for its lace, the salon, which opened in 1986, has attracted international clients from the arts, sports and corporate world.

“As a young girl growing up, I suffered terribly from dyslexia and every year, just barely made it by in school. Luckily I had tremendous support from my parents and an amazing will to succeed,” Ironmonger candidly relates.

As the public knows, Whoopi Goldberg does not ever appear in dresses. Sweats and sneakers are au courant. However, last year when she hosted the Academy Awards, she dazzled her fans by wearing a low-cut (allegedly to display her tattoo of the Peanuts character, Woodstock ) deep plum velvet gown.

When designing the wedding gown, “I knew that she wanted the same sweetheart neckline,” says Ironmonger.”

Fittings became a clandestine operation, held late at night in Goldberg’s hotel suite. “Whoopi was really fun, says Ironmonger and over the course of the three fittings we watched Melrose Place, and talked about my upcoming trip to Africa.”

“The dress itself was a very complicated champagne-coloured 1940’s princess line made of thirty metres of magnificent French Callais re-embroidered corded lace over another thirty metres of silk satin underneath and 90 covered buttons that had to be done up. I hand -dyed all of the lace in my bathtub – it was an unbelievably difficult job and I just kept my fingers crossed that the colour was even,” admits Ironmonger. “It took hours for the lace to dry and it was suspended all over my apartment – there were towels everywhere! Whoopi wasn’t going to wear a veil but we suggested it. It was eight feet long and joined a six-foot lace train. We weighted the entire scalloped bottom of the dress to keep the train in place. The amazing thing about the gown is that everything was reverse- stitched meaning even if you turned it inside out, you couldn’t see one stitch,” says Ironmonger proudly. “ The sleeves went into a very dramatic point with a ring finger loop and the neckline was trimmed with a double row of real fresh-water pearls.” (Denise Cronenberg’s idea.)

Ironmonger also sewed a tiny blue bow into one of the seams (she won’t divulge where), for good luck.

“Says Ironmonger in her own indomitable style,“ Making the gown for Whoopi was the pinnacle of my business career, but I have to tell you, when that dress was finally delivered to her, I had the best night’s sleep I’ve had in five weeks!”