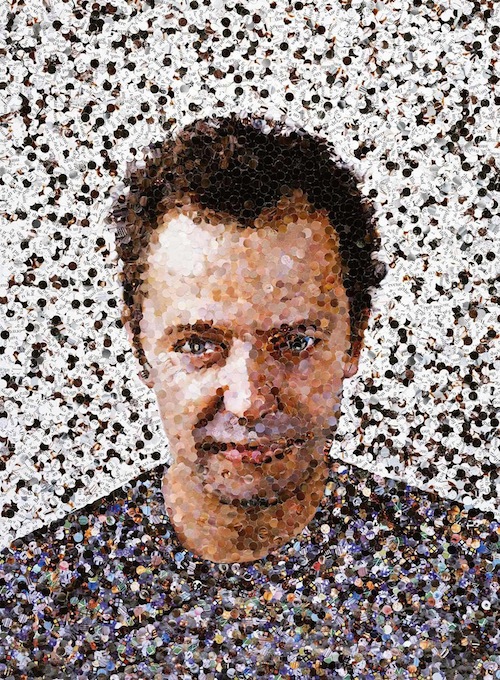 The ingenious Vik Muniz turns optical illusion on its head compelling the viewer to step back and first absorb the whole then scrutinize its individual parts- always with provocative, even humorous results. He combines photography and art to create intricately detailed mosaics- usually of people- from unconventional materials as disparate as junkyard rubbish, chocolate, sugar, even diamonds! From his impoverished beginnings in San Paulo, Brazil where he was shot in the leg trying to break-up a fight and compensation allowed him to fly to New York to explore an art career, to his eventual recognition by the international art world, seems a fairytale rise to fame, if not for the years of honing his art in between. His imaginative portraits can be found in the permanent collections at the Centre Georges Pompidou, Paris, Tate Modern, London and Guggenheim Museum in New York City. Muniz’s 2011 Academy Award nominated documentary, Waste Land chronicled local scrap yard pickers, in one of the world’s worst landfill dumps, on the outskirts of Rio de Janeiro. His collaboration with the pickers to create several of their portraits reveals a dignity and humanity that is at the heart of all his work.

Invited by the Vancouver Biennale’s founder and artistic director, Barrie Mowatt to create his first installation in Canada as part of the Biennale’s two-year celebration of public art, they chose the community of Squamish, for the site of the 15’X40 meter mosaic land art. Known as Sea to Sky Country because of its proximity to Vancouver and Whistler B.C., Muniz was attracted by Squamish’s interconnectedness with First Nations who live there and the availability of natural materials- wood and stone- at his disposal.

Muniz was feted by First Nations dancing and drumming prior to the showing of Waste Land at Totem Hall, Squamish. We spoke to the affable Vik Muniz in Vancouver before the Canadian Premiere of This Is Not A Ball, his directorial debut. The documentary follows his creation of a new major artwork leading up to the recent 2014 FIFA World Cup that incorporated 10,000 soccer balls! 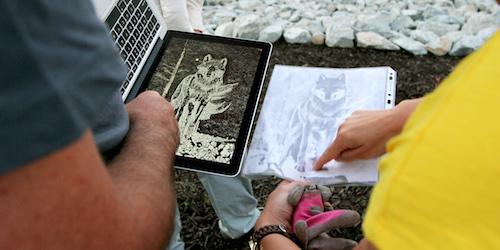 How did you become involved with the Vancouver Biennale in British Columbia, your first installation in Canada and why was Squamish (not Vancouver) selected to showcase your outdoor land art?

I was in discussions with the Vancouver Biennale’s Artistic Director, Barrie Mowatt for almost two years prior because of my hectic schedule. You have so much beauty here and I’m so impressed with the amount of public art works in Vancouver. I did research on Squamish and loved the connection to the land with First Nations and that it’s a community in transition rather than a big city. I scouted the area around Squamish several times – I even rode the Sea To Sky Gondola to take aerial photographs but we ended up using a barren piece of land just outside the town near the water. I also liked that the local materials I wanted to use were part of nature- rocks and wood- that would be accessible to all of us. Squamish, I understand, is really developing arts and culture in a big way and galvanized the community by co-ordinating volunteers to work with us on the project.

Your compelling mosaic portraits using unconventional recycled objects are usually of people with the crucial objective of transforming the land and engaging the community. In fact, your initial vision for this project was a portrait of a First Nations elder. In a surprising twist, you decided to focus on an animal. Why?

Yes, it’s the first time I’ve created an animal and I’m very into the study of animism. I consulted the elders and Chief in Squamish and they said that the wolf is becoming extinct in the area. I love First Nation’s myths surrounding the wolf: strong leadership but they must work together within the pack, a strong sense of family and perseverance. It was a great fit.

Your artistic process is so labor-intensive and meticulous. It’s one thing to create in your huge indoor studios in New York and Rio de Janeiro, but how do you work outdoors when your Wolf installation for example, is 15’ by 40 meters and subject to the weather?

My production director, Fabio Ghivelder was onsite every day for close to two weeks overseeing the wolf construction (along with Squamish volunteers’ organizer, Krisztina Egyed.) First a scaffold, 40 feet high had to be constructed as my photo of the wolf is actually projected from the top onto the ground. Of course the installation is so large it must be viewed from high up to create the details on the ground, so volunteers from the whole community worked at night under lights to complete it. We prayed for no rain!

In a powerful way your art and photography are visual illusions with layers of metaphor that force us ( albeit subtly) to confront the truth. How big a role does magic play in your art?

I’m a big collector of books on magic and Houdini!

Art has always dealt with optical illusion. Both the magician and the artist manipulate things people generally take for granted. Mine is not a George Lucas or Steven Spielberg 3D special film effects kind of illusion. My photographs destabilize the viewer and make the viewer think ‘I don’t believe what I’m seeing ’ because it’s so simple.