From Bass Guitarist In British Band, Funkapolitan Touring With Simple Minds, Bob Marley And The Clash, To Welder And Self-taught Industrial Designer 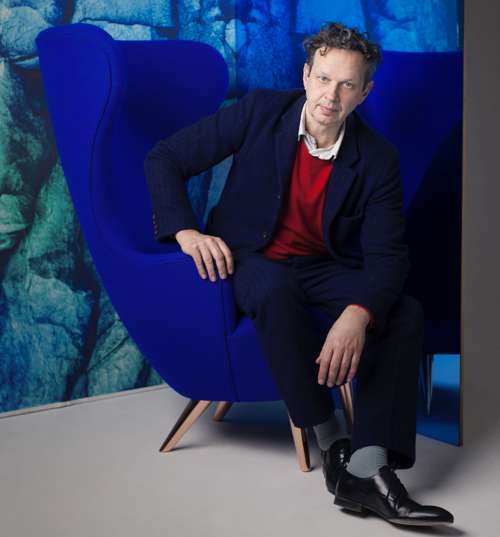 Imagine a rocking chair inspired by an illustration of a cat’s skeleton (Bolide Chaise, 1988); a sofa, its snaking curve reconfigured from a child’s electric racing car track (Serpentine Sofa 2003,) or light fixture based upon the reflection in an astronaut’s helmet. (Copper Shade, 2005)

These are the product of British industrial designer, Tom Dixon’s genius – albeit sometimes an eccentric one. And yet, there is always an extraordinary method to his madness. He’s still an obsessive tinkerer, a hold-over from the 80s when, not touring in his band, Funkapolitan, Dixon repaired motorcycles, welding scrap materials together to create functional objects. In 1987, a doodle of a chicken was transformed into the S-Chair catapulting Dixon from self -production into luxury Italian manufacturing.

The ever dapper Tom Dixon, 57 just returned to London after a whirlwind opening of his brand in two new stores of his design in NYC’s Soho neighbourhood and in LA’s Culver City. The latter, located in Platform, an innovative retail collective boasting a 30,000-sq-foot indoor -outdoor oasis, is a fusion of Dixon’s furnishings with fashion boutique, Curve.

In April, Dixon was front and centre at Milan Design Week, partnering with Caesarstone for his four sculptural quartz kitchens, The Restaurant, installed in a 17th Century church. Inspired by “Earth”, “Water”, “Air” and “Fire,” each fully functioning kitchen echoes its corresponding element – chop, freeze, steam and char.

“From the outset, we briefed Tom with different locations around the  globe to give attention and a unique identity to each kitchen,” explains Eli Feiglin, VP of Marketing at Caesarstone, the world’s leading supplier of quartz for countertops and bathrooms. Head office is located on Kibbutz Sdot Yam among the Roman ruins of ancient Caesarea, Israel.

His angular Caesorstone “Water” Kitchen was unveiled in Toronto at the 2015 Interior Design Show. Dixon designed chairs and tables to resemble jagged chunks of floating ice on Canada’s Great Lakes.

“I mean, there’s no secret that the kitchen is the most popular place at parties: everybody is a mini celebrity chef these days!” quips Dixon.

This month, Tom Dixon headlines the North American debut of his Caesarstone “Fire” Kitchen at IDS-Vancouver, The Interior Design Show September 22-25. As in Milan, a local chef will prepare blazing samples for Exhibition-goers and Dixon partners with Inform Interiors for a pop-up store.

“I learned a long time ago to not try and control everything and just try and create an environment where people can get on with their jobs with a strong direction, so that makes it easier to delegate and therefore to sleep,” admits Dixon.

Married with two children, Dixon purchased and converted an 80-year-old cylindrical water tower into a modernist home in 2009. Six flights of stairs later (no elevator,) it’s no wonder he rents it out. 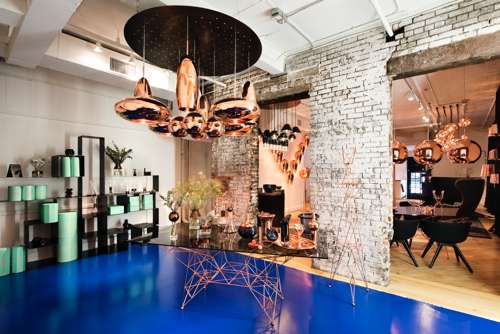 A voracious reader and historical researcher often match-making heritage elements with his futuristic designs, Dixon’s Design Research Studio recently transformed a Regency building on The Strand overlooking Trafalgar Square into the Bronte Restaurant. Inspired by Admiral Horatio Nelson, Duke of Bronte, atop the famous Nelson’s Column, his Dukeship would probably be scandalized by the spectacular pink and green interiors but would certainly be impressed with Dixon’s OBE: Officer of the Most Excellent Order of the British Empire.

For a man who has spent a lifetime re-inventing himself, I asked Dixon if he’s at all affected by global competition?

“Yep – (it’s) increasingly competitive but also endlessly re-inventible as it’s a constantly evolving landscape from a technical perspective and it’s a very rich and fertile field in terms of the theatrical possibilities,” he tells me. “I feel like I am only just starting to scratch the surface of all the inherent potential in the field.”