With Eros god of the gymnasium watching, the tennis apparel industry is capitalizing on men’s buff, sexy images that will sure to be a smash in Athens

If your jaw dropped, as mine did watching the tattooed, Carlos Moya, sweaty biceps rippling, serve in a Nike sleeveless top at the French Open, it was easy to confuse the image with a Harlequin book cover. The casual jock look that has dominated most of tennis fashion history is no more. Men’s tennis fashions have finally caught up to what the sports apparel industry has known about women’s tennis fashion for years – sex sells. 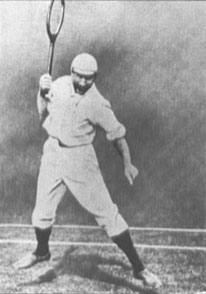 From the beginning, gentleman’s tennis wear was casual and an elegant extension of daywear reflecting the mores of society. In the 1880’s and 1890’s well cut cream or white flannel trousers, long-sleeved white flannel shirts worn with a silk tie and blazer were de rigueur for the proper English tennis-playing gentleman. ‘Turn-ups’, rolled up sleeves to the elbow exposing the arm, enough to make an Edwardian woman swoon, became popular until the 1930’s. Trousers were held up by a brightly coloured sash until women complained about the men constantly pulling at there pants while playing tennis and the belt or “braces” were invented. Caps were worn, often in tennis club or university colours and shoes were made of leather designed to grip slippery grass courts. 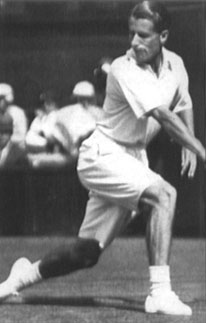 Perhaps the first fashion plates of men’s tennis were Herbert Lawford who preferred the knickerbockers costume tapered just below the knee compared to the tailored long trousers favoured by identical twin brothers William and Ernest Renshaw. The Gentleman’s Magazine of Fashion (think GQ at the turn of the century) said in 1882 that on court “opinion is equally divided between trousers and knickerbockers.”

Well into the 1900s, the ‘Owe Forty’ or blanket coat was worn to and from the court by both men and women. Cut like a large overcoat, made of cream blanket material it was thrown suavely over the shoulders to help keep players warm. Could this have been the precursor of the present day tracksuit?

By the 1930’s Fred Perry and Frank Shields sported the ‘Oxford Bag’ style trousers and open-neck shirts but it wasn’t until 1933 that Bunny Austin wore the first men’s shorts (albeit almost to his knees) on Centre Court at Wimbledon that changed men’s tennis fashions forever.

Although the lengths of men’s shorts would go up and down for the next 70 years, styles weren’t specifically singled out as a real impediment until Sue Mott, covering Wimbledon for The Daily Telegraph in 1998 wrote that the reason that Spain’s Carlos Moya committed so many foot-faults in his 2nd round loss was that his shorts were too long!

“His foot-faulting was ridiculous and probably owed everything to the fact that he could not see his shoes. He had so much billowing sail in his knee-length shorts that he only needed a bit of rigging and he could have competed in the Whitbread Round the World yacht race.”

It’s hard to know exactly when male tennis stars began to look sexy in on-court attire (a kneecap is in the eye of the beholder, after all,) but certainly there seems to be a relationship between tennis players attaining rock star status, clothing endorsements and sex appeal. Andre Agassi in his form-fitting Nike biking pants peaking out from under his tennis shorts, started an international fashion trend both on and off the courts in 1992. He also parlayed black tennis shoes and apparel into the male version of the little black dress staple while other competitors rode the colourful zigs and zags of the surfer dude look into 2009. 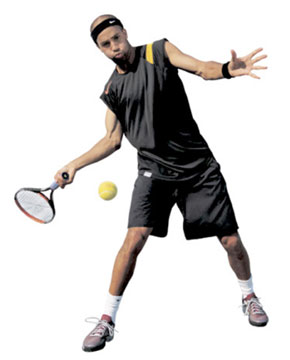 But in all the history of men’s tennis apparel, the most enduring classic has to be the much copied, Lacoste shirt. René Lacoste, the owner of France’s largest knitwear company, became a legend of tennis when he and his team-mates, ‘The Musketeers’ stole the Davis Cup away from the Americans in 1927 and again in 1928. His three French Open victories, two at Wimbledon and two U.S. Open titles solidified his nickname as ‘The Alligator’ by the American press, launching the first logo design on tennis apparel. The Lacoste shirt revolutionized men’s sportswear on the courts. It was white, with a ribbed collar, short-sleeved and made out of a knitted fabric called ‘jersey petit piqué’. Seventy years later French tennis stars, Sebastien Grosjean and Henri Leconte still wear the emblem on their sleeves.

But what if men’s tennis tops have no sleeves? Would underarm hair length be written into Tournament rules?

“We wanted to move the game forward- shake things up a bit like the women do every year,” says Canadian, Sean Vali, Divisional Merchandising Manager for Nike Men’s Sport Apparel, for the past 14 years, out of Portland Oregon. “We sat down with Tommy Haas in March 2002 and asked him what changes he’d like to make in men’s tennis wear. Every time he served his shirt looked terrible, drenched in sweat he was always pulling at it. He said ‘I felt like ripping the sleeves off.’” That’s when a very lucrative lightbulb went on. 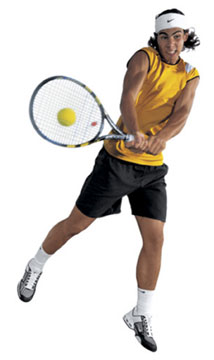 Vali continues” We looked at basketball tops and saw how the larger armhole and less fabric increased range of motion and knew we could apply it to tennis tops, just decrease the size of the armhole. Tommy loved the idea and was all set to wear it at the Australian Open last year but he was injured so we went to James Blake with it. Ironically, Carlos Moya was a little reluctant to wear sleeveless at first. These players’ bodies are absolutely ripped. They are all ‘Type A’ personalities and they are in fantastic shape.”

Even, staid Wimbledon will allow it on Centre Court this year (as long as it’s white) but has had to re-write the rules and regulations for players tops that for over 125 years, had to have the traditional collar and sleeves.

“I guess there is power in numbers,” says All England Lawn and Tennis Club assistant referee Douglas Dixon. “American, Justin Gimelstob just practiced in a sleeveless top last year at Wimbledon but you know, it’s like when the Americans started to wear shorts. The more players who start wearing sleeveless shirts put pressure to change the rules, even at Wimbledon. Don’t forget too that manufacturers send us their designs well ahead of tournaments so we know what’s coming. Frankly it’s the logos I’m wondering about. I would think that it would take away a fair amount of endorsement income since Wimbledon only allows two standard logos, both on the sleeves.”

Sports apparel companies are certainly not too worried about player endorsements since cutting edge styles on court will more than make up for less logo placement when it translates into sales (or so they hope.) All eyes will soon be on the Olympics in Athens – an incredible marketing arena for sports apparel worldwide.

“Nike will be launching a very colourful and distinctive look in men’s tennis apparel at Athens,” says Sean Vali who was hesitant to give away all the details. “Look for a seamless crew neck for men, very tailored for the European market, that hugs the body but feels like less fabric.”