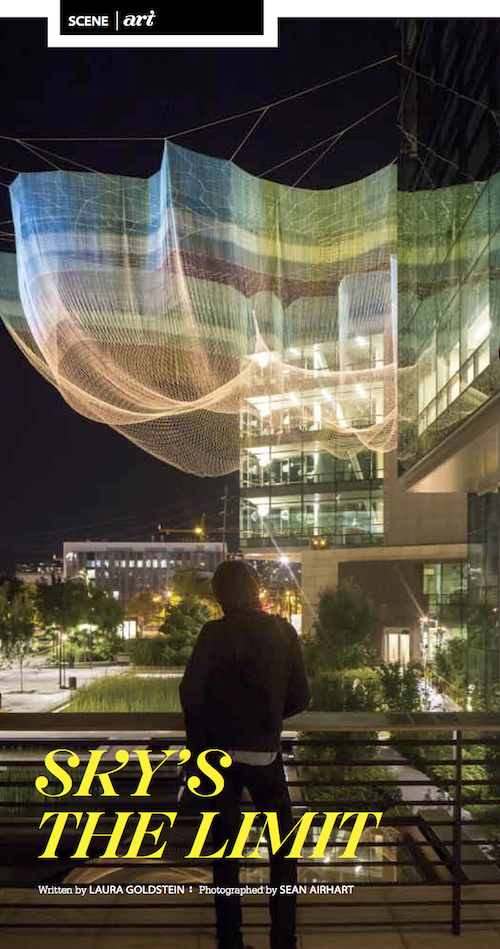 As ephemeral as her seed of an idea cast to the wind, Janet Echelman’s aerial sculpture for the Bill & Melinda Gates Foundation campus headquarters at Seattle, Washington, began simply by watching the Pacific Northwest skies; the installation of a camera on the roof captured the sky every five minutes over a 24-hour period.

“I thought a great deal about the sky metaphorically with their Foundation’s mission of uniting people all over the world in common goals of good health and respecting the environment,” explains Echelman. “ I wanted to re-create the combination of hues at sunrise from their regional offices from New Delhi to London, Beijing to Seattle, and the gradual transmuting of colors.”

Janet received the 2014 Smithsonian American Ingenuity Award in Visual Arts, presented by architect Daniel Libeskind. The awards are given annually and honor innovation in nine categories “to celebrate the greatest innovators in America today.”

Studio Echelman, based in Brookline, MA,
utilizes a complicated custom-designed software tool by Autodesk that mimics the most intricate effects of gravity and wind force to visualize her sculptures. Manufacturing takes place at a “secret location” in Washington State.

Two years in the making, Impatient Optimist, (also the title of Bill Gate’s 2012 autobiography,) is a voluminous tethered web of lightweight braided Honeywell Spectra nylon, 15 times stronger than steel. It will be installed at the Seattle campus in November 2014.

At night, with computerized lighting effects, the aerial sculpture morphs into an alien organic life form, symbiotic with every weather condition. 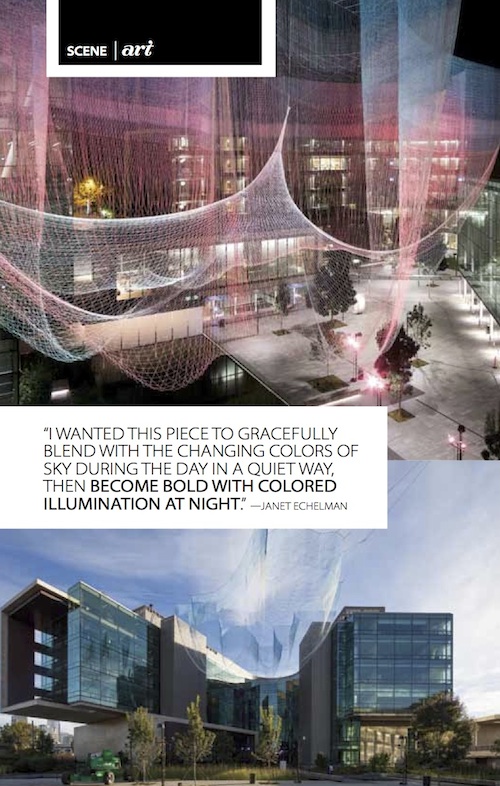 Echelman’s exploration of the transformative power of public art raised the bar with her recent Vancouver, B.C. installation of Skies Painted With Unnumbered Sparks for the TED Conference’s 30th Anniversary. More than double the usual size, weighing 3,500 pounds, the sculpture was suspended 745 feet over the waterfront between the 24-storey Fairmont Waterfront Hotel and the Vancouver Convention Centre.

Always challenging herself and the technology racing to keep up with her vivid imagination, Echelman is currently working on an indoor commission for 2015 for the Matthew Knight Arena at Eugene, Oregon. It will explore the nature of sports, team spirit and most excitingly, respond to sensors that will affect its movement and lighting in reaction to the cheering of spectators!

Says Echelman, “Bringing people together to interact with public art and nature is ultimately my goal with every project.”