Don’t be surprised if dolphins or parrot fish watch as you eat. After all, you are the one behind glass in this unique undersea restaurant

Visitors to Eilat, Israel’s trendy beach resort area, spend a lot of time under water – snorkelling, swimming with the dolphins and scuba diving. Although they still need to come up occasionally for air, they don’t really need to come up for dinner: at the Red Sea Star, humans sit in the aquarium while fish watch them eat.

Located five metres below the surface of the Red Sea, this is an eatery the likes of which Jules Verne would approve. The US$8 million Red Sea Star Underwater Observatory, Restaurant and Bar took 10 years to plan and build, with a mandate to preserve the exotic sea life it seeks to emulate in its design. 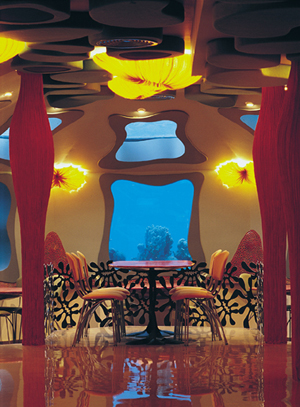 The entrance to the Red Sea Star resembles a giant manta ray hovering at the end of a tail-like pier 16.8 metres above the Gulf of Aqaba. It took nearly 4,000 tonnes of concrete to anchor the restaurant to its foundation on the sea floor.

“We actually re-constructed the entire reef surrounding the restaurant,” explains general manager Ofer Ben Israel of the real estate company Neot Rivka, which owns the Red Sea Star. “The Red Sea reef is one of the most spectacular in the world for diving but in this particular location, it was like an underwater desert — ruined by ships docking in the port and divers plucking coral.”

“So while the Red Sea Star was a very complex engineering feat of concrete and steel to contend with, we also put together a team of marine biologists, under the supervision of the Israeli Nature Reserve, to re-create an underwater coral nursery that would attract thousands of fish back to the restaurant site.”

This team, headed by Doron Kairi, a marine-life expert, transplanted living coral, sea stars, sponges and sea cucumbers from overstocked areas of the Red Sea and glued them with medical Crazy Glue to create a living reef around the restaurant. An astounding 70% of the coral grew back, growing at four times the usual yearly rate of two centimetres a year. 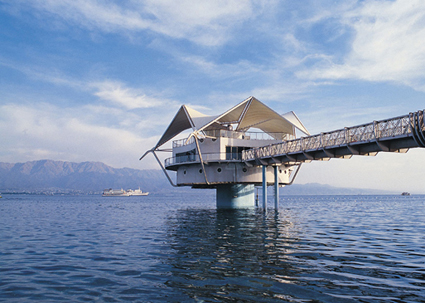 Parrot fish, butterfly fish and other tropical species that hadn’t been seen in this area for 25 years suddenly began to appear and a natural, symbiotic relationship evolved. The underwater garden continues to be maintained each day by divers who dust the coral — literally – to keep it clean, and stock nurseries of growing coral in sheltered habitats nearby.

Owners of the Red Sea Star are so concerned about environmental conditions affecting the coral that they had to re-configure their air-conditioning system to maintain specific water temperatures in the surrounding sea. For the evening, special low lighting was created that does not hinder coral growth but is still bright enough to allow observers to watch the sea life.
Chef Joseph Galicco prepares exquisite seafood dishes in the the kitchen above water,
to be served to his guests at the sea-floor level.

Diners descend by elevator into a Dali-esque 212-square-metre reverse aquarium. They are surrounded by 62 amorphous portholes, windows on a vibrant world of tropical fish that dart in and out of the nurtured coral gardens. The entire restaurant is bathed in a soothing glow from intricate fabric sconces shaped like coral and medusa sea creatures, some suspended from ceiling skylights, others freestanding silk pillars called “mermaids” lit from within. Their light reflects off orange resin amoeba-shaped tables surrounded by laser-cut wrought iron seaweed sculptures. An adjoining bar is decorated with blue, yellow and purple velvet sea urchin stools. The only stingers here are of the alcoholic sort.

The Red Sea Star’s interior was designed by Tel Aviv-based artist and sculptor Ayala Serfaty. Her imaginative furniture and lighting pieces all have aquatic themes, hence the name of her company, Aqua Creations, which she runs with her husband Albi.

“I chose the theme of the sea for my work because water is the source of life,” she says.

“I was four months pregnant and snorkelling in the Red Sea and very aware of the child inside me – how she was floating weightlessly inside my womb surrounded by comfort,” Serfaty recalls. “I thought, ‘People would love to be in this environment all the time.’ ”

Serfaty had already received international commissions from hotels and restaurants, retail stores and private homes in Milan, Israel, Germany, New York, Miami and San Francisco, before she bid on the underwater project and won the contract.

When Serfaty heard about the building of the Red Sea Star she felt it was besharit (the Hebrew equivalent for karma) that she design its underwater environment.

Still, it was a major challenge. When she saw the structure, it was forbidding and claustrophobic. Worst of all was the effect of colour and lighting on the food.

“Colours change dramatically underwater and the sea’s light from the windows made everything look even bluer and unappetizing,” she explains. Serfaty balanced the colours by infusing the restaurant with warm tones of yellow and amber. An epoxy-sealed floor was poured over real sand to give the feeling of the sea bed. Air conditioning and acoustic ducts on the ceiling were disguised with soft sculptures resembling pebbles.

Another challenge for the Red Sea Star was keeping food hot while it travelled from the rooftop kitchen to the underwater restaurant.

Chef Joseph Galicco, who studied cooking in France and Japan, has an eclectic cooking style that is both delicious and inventive. And while fish and seafood are, naturally, Red Sea Star specialties, he also prepares a spectacular salad of shiitake mushrooms, soba noodles, carrots, sprouts, nori seaweed and scallions served in its own lightly fried crisp bowl made from yams. The seaweed, he explained, is cultivated on a kibbutz in northern Israel and exported to Japan.

The Red Sea Star attracts not only fish lovers. Many marriage proposals have been made in its romantic depths. One man visiting from Britain arranged for one of the divers to hold a sign outside a window at a strategic point during dessert, asking his companion to marry him. How could she refuse?

Chef Galicco also notes that, sometimes at lunch, the dolphins swim over from nearby Dolphin Reef and peer in the windows, just to watch the humans eat!

– Air Canada and El Al fly to Tel Aviv from Toronto direct or with a stopover in Montreal. Check with your travel agent; flight prices vary substantially throughout the year.

– Car rentals and gas (by law, all vehicles are air-conditioned) are very expensive in Israel, about $80 per day. It is a five-hour drive from Tel Aviv to Eilat if you wish to see the beautiful Negev desert or take a side trip to the Dead Sea. Highways are excellent; the drivers are not. If you dare to drive, be prepared for speeding and excessive tailgating.

This unique restaurant is located behind the Meridien Hotel, southern square, Eilat. Dinner for two is about US$100. A full wine list emphasizes domestic bottles. Convenient access for the disabled by elevator. Reservations recommended: Call 972-7-634-7777 or fax 972-7-634-7171