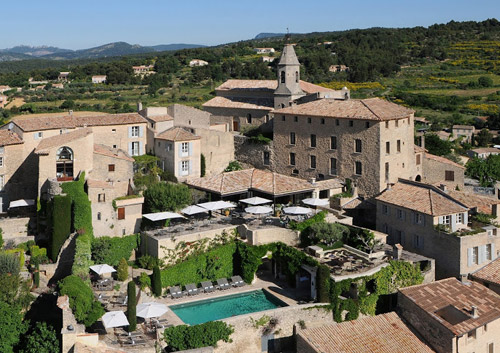 Search for the soul of France and you will probably alight in Provence’s Luberon. Collette in love, Van Gogh and Cezanne feverishly impassioned by colour; F. Scott Fitzgerald writing Tender is the Night– all four were seduced by her luminous landscapes and capricious nature.

Imagine standing on a narrow, wrought-iron Juliet balcony, the sun, setting far across the town of Caromb, a fuchsia fireball hovering above purple smoke. A dog Is barking and somewhere a chorus answers. The hotel, now the colour of crème caramel, towers high above guests meandering through terraced gardens that seem to tumble endlessly below. A circular patio surround a goldfish pond guarded by soaring cypress foot soldiers. Embedded in a secret arbour of tangled vines, a gargoyle fountain watches silently.

Through bougainvillea archways and down cobblestone stairs is a shimmering swimming pool carved out of the rock face on the edge of the village ramparts. And to the east, the omnipresent Mt. Ventoux is awash in ghostly mist.

Set atop its sleepy little namesake town like an eagle’s aerie is Hostellerie de Crillon le Brave, is a honeymoon haven located about 40 minutes northeast of Avignon. Far from the madding crowd, it’s also the perfect base from which to explore Provence – the very countryside from which medieval courtly love was thought to have originated!

Owned by two Canadian entrepreneurs, Peter Chittick and Craig Miller, who as students led Butterfield and Robinson Bicycle Tours in the area, the formidable Maison Roche was once the old presbytery of an adjoining church dating back to the 16th century. It also served as the village stable (now a restaurant in the hotel) and local school. When Chittick discovered the property it was a nest of picturesque stone houses belonging to a Parisian industrialist who had spent 15 years transforming the crumbling barracks and labyrinthine garden into an idyllic country retreat.

A comfortable laissez-faire casualness pervades the atmosphere: by the front door a basket of boules, a centuries-old game similar to lawn bowling, may or may not elicit le sportif.

Inside one is immediately struck by the intimacy of Crillon Le Brave– like visiting a charming –albeit – sumptuous and deliciously romantic private home rather than a hotel.

The Hostellerie is decorated in what is described by the French as ‘chic rustique moderne’ ; Souleiado fabrics derived from exotic Indian prints brought by traders to Provence marry beautifully with white and ochre walls, beamed ceilings, and unpretentious antiques mixed with modern armoires throughout. In the convivial salon/bar one can relax with a cool pastis or discuss travel plans with fellow guests. 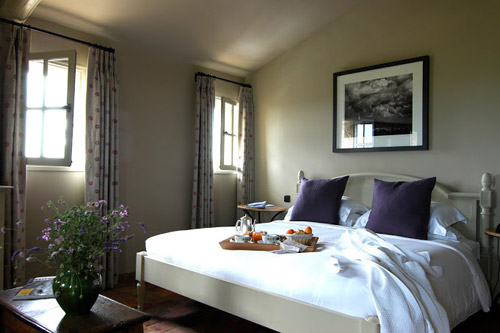 The only problem with the bedrooms at Crillon Le Brave is that each is so comfortable you never want to leave! Awash in white, crisp Frette sheets are dotted with splashes of lavender or green pillows and throws, bringing the outside colour palette subtly indoors. No two rooms are exactly alike with bathrooms an oasis of nourishment and romance: claw-foot tubs, hand-painted tiles and exquisite little bottles of bain moussant au tilleul, a hauntingly subtle scent from indigenous linden trees, that seems to revitalize after a luxurious soak.

There are several glorious honeymoon suites throughout the property, many with two levels and private terraces. What could be more romantic than sharing a breakfast of café au lait and croissants with wonderful views of lazy outcroppings of mountains Les Dentelles de Monmirail? Impressionist paintings mix with watercolours by renowned Canadian architect ( and former guest), Jack Diamond. Several houses are perfect for family or wedding party guests and may be rented in their entirety.

If a spectacular wedding fete in France has always been your dream, Crillon le Brave will help you plan a traditional Provencal reception. Couples can even exchange vows by candlelight in the church adjacent to the hotel as Peter Chittick and his wife did. However, there is a caveat: The legalities of marrying in France can be very bureaucratic and take months to secure. Craig Miller suggests having a reception at the hotel but marry officially at home.

What could be more resplendent than the Hostellerie’s gardens at dusk, perhaps under coloured strings of little lights nestled in baskets, suspended from arbours of grapevines? The chef will create a traditional Provencal wedding cake: Piece Monte a virtual Mont Ventoux of intricate chocolate confection fashioned in rectangular layers. Or a regal croquembouche, a pyramid of jeweled cream puffs crowned by a burnished caramel web of spun sugar.

In fall and winter, receptions are held in the vaulted refectory, a spectacular stone dining room that was one a stable! Local ingredients are transformed into elaborate feasts like mille feuilles of fois gras with local truffles, ravioli de chevre and for dessert, nougat glace.

“Others merely live, I vegetate!” claimed the writer and sybaritic lover of Provence, Cyril Connolly, a credo heartily endorsed by the hotel.

However, should you wish to tear yourself away from Crillon le Brave for the day, don’t leave empty handed. The Maitre d’hotel will provide you with a picnic basket filled with pan bagna (a Provencal specialty baguette sandwich filled with tuna, tomatoes, onions, olives and hard-boiled eggs); tapenade of olive paste, cold salmon, cruditees and flan de meil made from local lavender honey.

About one hour’s drive north, you can explore Roman ruins, the most spectacular of which is the amphitheatre in Orange, twenty-five miles away. Provence was the first province established by the Romans outside of Italy, and the acoustics found favour with another emperor- of opera- the late Pavarotti, who often performed there during the annual summer music festival. Continue driving north about half an hour and you’ll arrive at the intriguing Vaison-la-Romaine, a sort of French Pompeii where excavations have revealed everything about Roman life circa 50 A.D. including the stone kitchen, colonnaded streets, shops and villas decorated with intricate mosaics.

The markets are a must-see and entice all of the senses. If it’s Friday, it must be the flower and truffle market in Carpentras, just a short drive from the hotel. One of the largest though, is Saturday morning in Apt, where bulging stalls are lined up under shady sycamore trees to offer the freshest fish, cheeses and vegetables in overwhelming abundance. One stall boasts 18 varieties of chevre, pungent white dollops of cheese, many with edible flowers embedded on top and vast pyramids of tantalizing kinds of olives. Vendors will resort to some imaginative ploys to attract customers including cranking out tunes from a rickety barrel organ or singing arias from Carmen. But be forewarned: vendors in France do not take too kindly to our North American custom of squeezing fruit and vegetables before we buy! Here it is acceptable to point and they will choose and weigh them for you. 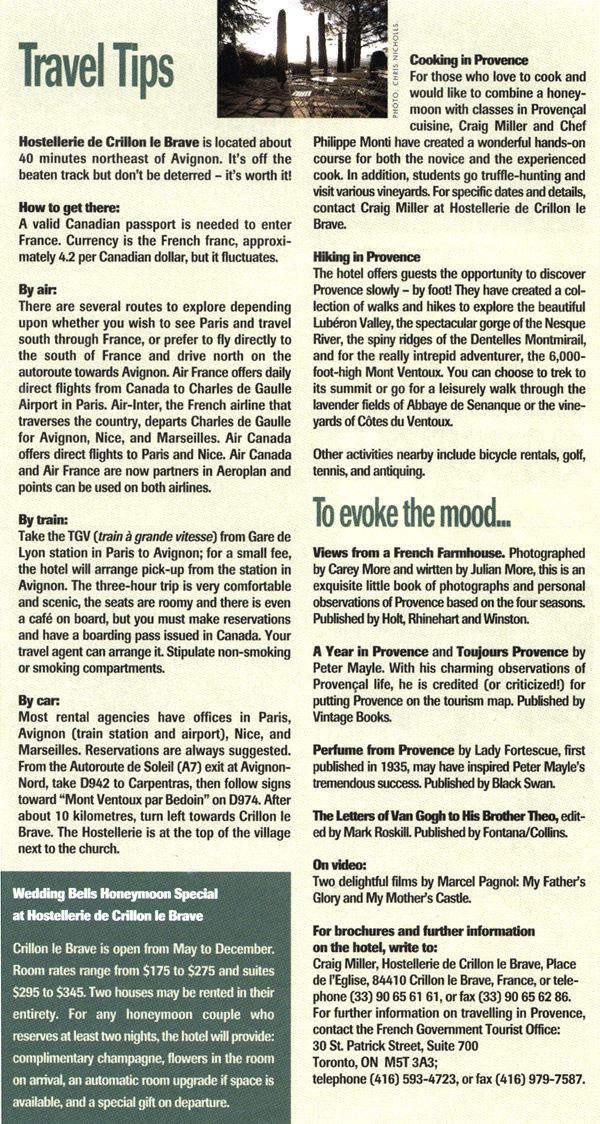 If antiquing is your passion, drive south to L’Isle-sur-la-Sorgue on Sunday. Known as the ‘Village of Antiquaires’, it was once the summer retreat of the Avignon Popes. A little village of cobblestone streets is really a number of tiny island pendants surrounded by the Sorgue River and strung together by bridges. Over 500 antique dealers ply their trade from a converted railway station and if wrought iron or French country furniture is your weakness – this is paradise!

Other delights of the countryside include stopping at some of the hundreds of degustations or vineyards offering wine tastings. They may be as humble as a yellow shuttered farmhouse or as grand as the world famous Chateau de Beaucastel, producers of gold medal Chateauneuf – du-Pape.

Your heart will certainly be held captive by the walled city of Avignon, whose fortified ramparts enclose a sophisticated mecca of shops and restaurants and the immense Palais des Pape and Musee du Petit Palais. Hundreds of stone steps lead down from the palace through a veritable maze of cobblestone streets and converge on the main square, surrounded by cafes and restaurants. People-watching is always on the menu. Music from a spectacular antique double-decker carousel, a whirling phantasm of squeals and shrieks by night, competes with the clamour for roasting chestnuts on open fires, by day.

Ah yes, the broken bridge partially spanning the Rhone, is indeed the Pont d’Avignon of the nursery rhyme, where all went dancing “tout en round.”

Arriving back at Hostellerie de Crillon, slip into the pool for a refreshing swim. Perhaps a vin d’orange a deux on Terrace Ventoux one of the private stone enclaves separated by wisteria arches, that seems to capture the cross-breeze and lingering sent of rosemary. The bell tower begins to toll it mournful reprise signaling the start of the pleasurable ritual of dressing for dinner (the clock is silenced at 11:00 p.m. at the hotel despite the villagers who protested that they couldn’t sleep without the hourly chiming!)

Life is almost enchanted here- could anything be more sublime?

The writer was a guest of Crillon Le Brave