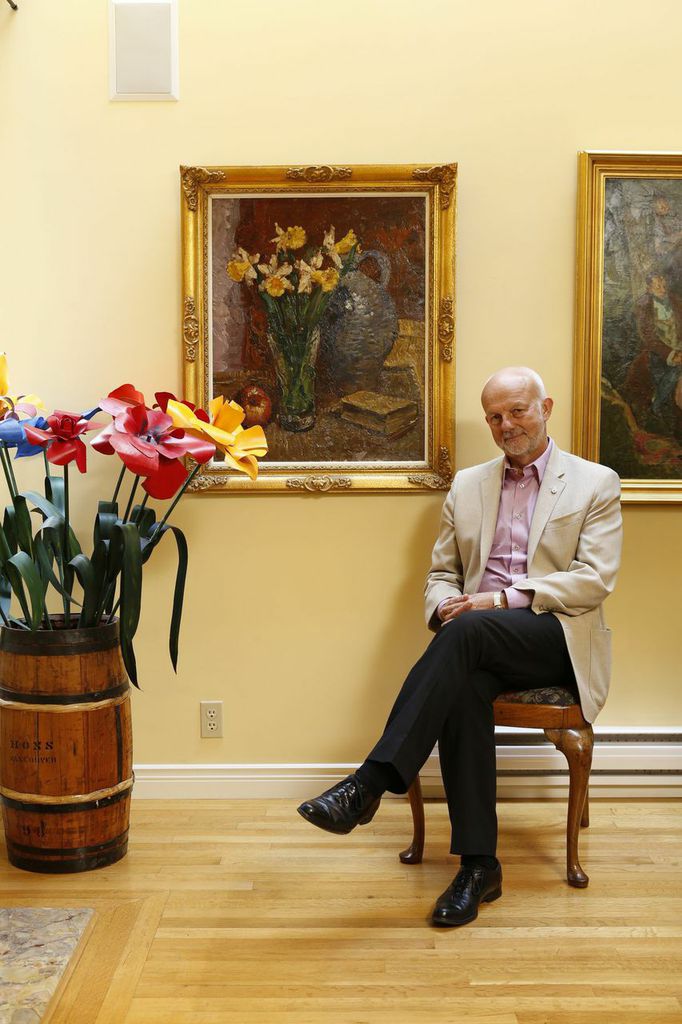 “I have had a most rare vision. I have had a dream past the wit of man to say what dream it was.” (Bottom, A Midsummer Night’s Dream)

Christopher Gaze could read the phonebook (audio book version should one exist in these Googling times,) and make it sound like Shakespearean theatre. Dapper in cream jacket, mauve shirt and burgundy patterned silk scarf, he is a raconteur extraordinaire- an eponymous Puck – in fact, one of his favourite roles. But his dry wit and mischievous eyes belie the compelling vision he had 25 years ago that Vancouver could not only sustain a Shakespearean festival, but become one of the most enriching in Canada.

Sitting in his sunny antique-filled Kitsilano home he shares with his wife, Jennifer, we are reminiscing about a surprising coincidence that found us both at Shaw Festival, Niagara-on-the-Lake at the same time in 1976. Inspired by his mentor, legendary Shakespearean actor, Douglas Campbell, to come to Canada in 1975, Gaze, a young thespian arriving from the Bristol Old Vic Theatre in England, would perform at Shaw for three seasons. There he tread the boards opposite several of Canada’s most illustrious leading ladies of the time, Roberta Maxwell and the late Kate Reid in Mrs. Warren’s Profession. Paxton Whitehead, Artistic Director, had just decreed that ‘WE’, (translation: the publicity department,) would be banning Canada’s most malevolent theatre critic, the Toronto Star’s late Gina Mallet (we publicists snidely called her “hammer-head” like the shark,) from reviewing opening nights that season, by not extending her any media invitations.

“Wasn’t that deliciously scandalous?” laughs Gaze, 63.
As I remember it, she was still somehow able to buy a ticket and sneak in and then write one of her notorious reviews ripping us to shreds for no good reason!”

Gaze answered the call ‘go west, young man’ in 1980 with stints at various regional theatres including Northern Light Theatre, Edmonton (where he met and married his first wife and had two sons.) Moving on to Vancouver in 1983, “I hung out with the likes of Bruno Gerussi getting bits and pieces in CBC-TV dramas like The Beach Combers and others like Stargate, Smallville and commercials. But my dream was to start a Shakespearean theatre company here in Vancouver,” admits Gaze. “Two other short-lived companies had already failed here but Douglas Campbell founded Stratford Festival in 1953 and it was that belief in himself that drove me on. I’ve always been a ‘make things happen’ kind of person. I could see a niche in Vancouver- no mosquitoes, beautiful scenery, tourists and in 1990, I founded Bard on the Beach Shakespeare Festival.”

Ontario’s Stratford Festival was birthed in an open tent and so the Medieval white and red striped carnival tent in Vanier Park overlooking English Bay, (“I insisted on keeping the open backdrop,” he says,) proved a compelling enticement when Artistic Director, Christopher Gaze premiered with one production, A Midsummer Night’s Dream. The season’s budget was a paltry $35,000. 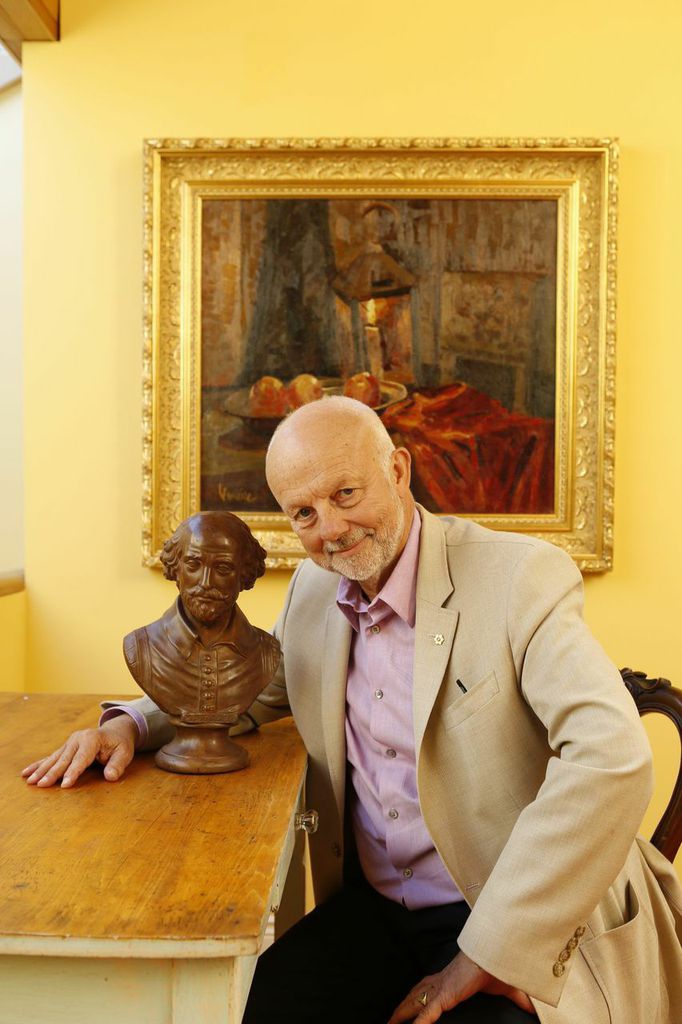 “ We commandeered a vessel and had actors dressed up like Shakespeare and Queen Elizabeth sailing by to open the festivities,” Gaze excitedly relates as if it were yesterday. “ We hit the front page of the Vancouver Sun in colour and that gave the start-up Bard so much publicity that 6,000 theatre-goers saw the production in four weeks.”

That lone carnival tent has expanded so greatly in the past quarter century that Bard on the Beach could be another kingdom in Game of Thrones! Now one of Canada’s largest not-for-profits with a budget of $4 million; a company of 30 actors, plus technicians and guest directors, Bard attendance soared to 89,000 last year with seasons running June to September. Bard Village boasts lively entertainment, concession stands, bar and boutiques, surrounding the custom-built BMO Mainstage Tent erected in 2011 with thrust stage and comfortable tiered seating for 742. It still carries on the tradition of the open-ended canvas so that actors perform against a spectacular backdrop of sea and mountains. The Douglas Campbell Studio stage seats 240 running two productions in repertory of Shakespeare’s lesser -known plays.

‘It is not in the stars to hold our destiny, but in ourselves’ (Romeo and Juliet)

“Educating young people in our community about Shakespeare and really how relevant his writing still is today, was always part of my vision,” says Gaze. “We bring his texts to life in the classrooms developed by our Director of Education, Mary Hartman, who leads classroom teachers in workshops for a wide variety of grades as do teaching artists who make Shakespeare really fun for students.”

How apropos that their 25th Anniversary coincides this year with the 450th Anniversary of Shakespeare’s birth heralded with a re-imagining of A Mid Summer Night’s Dream. The Tempest, Cymboline, with Equivocation (from the Belfry Theatre in Victoria) alternating on The Douglas Campbell Studio Stage, fills out the playbill. Performances by members of the VSO, Shakespeare-inspired opera performances, a lecture series and Gazing Back, in which Gaze will deliver a one-man-show on the trials, tribulations and “secrets” of the Festival’s history, toast the celebrations.

Bard on the Beach has also joined forces with the Arts Club Theatre Company to create the West 1st Theatre Centre, approved by the City of Vancouver for the building of a 44,000 sq. ft. space at 162 West 1st. Custom designed by Prosenium Architecture and Interiors Inc., the 250-seat theatre will ensure year-round rehearsal halls, education, production facilities and offices for both theatre companies and is scheduled to open in 2015.

“Shakespeare in the middle of the city- what a game changer!” beams Gaze.

THE PERSONAL SIDE: Q&A CHRISTOPHER GAZE

Adults recognize you as an actor and founder of Bard on the Beach but surprisingly it’s children who may be your most ardent fans- why is that?

That’s because I’ve done hundreds of voice-overs for cartoon shows and kids’ films. When I go into a school to do a presentation, the first thing I recite are the opening lines from the Emmy Award-winning animated Madeline series or characters from Bionicles, Spider-Man Unlimited, Ninja Turtles or Beast Machines. The kids immediately start screaming and clapping. That’s how I get their attention. I love doing voice-overs- it’s extremely lucrative too. It’s how I put my sons through university!

If you could be a time traveller, and be on stage with any Shakespearean actor, who would that have been?

Well, I think it would have been glorious to be the young Romeo
in Shakespeare’s original production of Romeo and Juliet or be on stage with Sir Laurence Olivier in Richard III. But in modern times, I would love to have been cast in director, Sir Kenneth Branagh’s Shakespearean films like Much Ado About Nothing.
I just love how accessible he makes them – so much fun – he has just the right touch.

I’ve noticed that many performers keep their awards in the loo! You are wearing your Order of British Columbia pin, and I saw several framed and signed costume designs in the afore-mentioned powder room.

Kate Reid presented me with a signed and framed costume design by Hilary Corbett of Frank the character I played in Mrs. Warren’s Profession in 1976 at Shaw Festival. It says ‘For my Golden Summer.’ I also have Katherine Hepburn’s book, The Making of the African Queen personally inscribed, whom I met when I was performing in the U.S. and but it’s not kept in the loo.