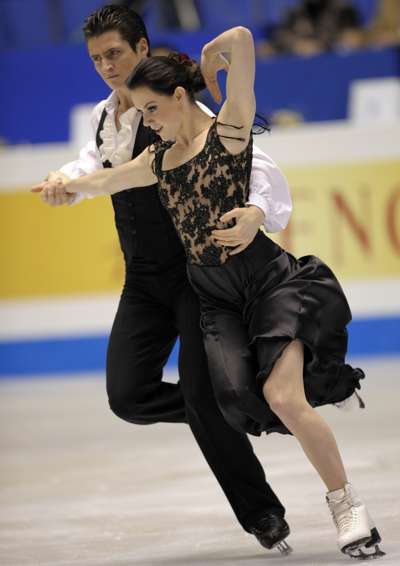 Chanting and screaming their appreciation and excitement, thousands of mobile phone flashlights lit-up Vancouver’s Rogers Arena like swarms of fireflies swaying to a beat. Rock stars usually receive that kind of veneration although on that night, the stars happen to be wearing skates.

“It’s always fun when we tackle a tour because the pressure is off,” says the bubbly Tessa Virtue, in advance of the final leg of their Canadian coast-to-coast Stars on Ice Tourculminating in Vancouver and presented by Investors Group and Lindt. “Also, it’s like being with family again because Team Canada is here too,” she says, referring to the 2018 Canadian Olympic Skating Team at the PyeongChang Winter Olympics who won the Team Competition’s Gold Medal. Joining them on tour is three-time World Champion, Patrick Chan who lives in Vancouver and is opening a skating school here soon; Olympic Bronze Pairs Medalists, Meagan Duhamel & Eric Radford; 2018 Olympic Bronze Medalist, Kaetlyn Osmond and World Bronze Medalist, Gabrielle Daleman.

then Silver at the 2014 Olympics in Sochi, Russia. “We don’t have to worry anymore about technical elements and judges now, which is so comforting because it’s just entertaining and hopefully getting people tapping their feet and dancing with us in the stands,” Virtue adds.

Their phenomenal ice dance performance in the Free Dance Competition dazzled the stringent judges and clinched a Gold Medal for Canada at PyeongChang. “After such a successful Games we wanted to share our Moulin Rougeprogramme with the rest of Canada on the Stars on Ice Tour. It’s such an emotional programme and we weren’t quite ready to say goodbye to it,” Virtue admits.

“I’m pretty proud to say that I came up with the Moulin Rouge idea,” laughs Moir, after the pair came out of a two-year-long self-imposed break from competition after Sochi. “I was watching the movie late one night and thought, wow, this is everything we want for our comeback 2018 Olympic programme. I took it to Tessa and once Tessa believed in it too, we thought, go for it!”

“Emotional” is an understatement. When audiences watch their performance in person, the choreography is so steamy you expect the ice to melt beneath the pair’s feet! Quebec fashion designer, Mathieu Caron, previously a competitive ballroom dancer, contributes to the sizzle with sensually embellished costumes. Samuel Chouinard, who with Marie-France Dubreuil, a former Canadian ice dancing champion turned coach, created the riveting choreography to Roxannefrom the soundtrack from Moulin Rouge. He attributes the pair’s interpretation to their incredible chemistry and the fact that “when you’ve been together for 20 years, you know everything about one another,” he disclosed in a CBC-Radio interview. It’s also why the world obsessively wants Scott and Tessa to be together outside the rink too because who doesn’t love a fairy tale, happily-ever-after-ending?

“We’ve been through so much together. We’ve grown up together,” explains Moir, alluding to their earliest days as children training in Ilderton, Ontario just north of London. In fact, it was Moir’s Aunt Carol who put the two kids together and was their first ice dancing coach.

In an endearing video montage shown on the arena’s Jumbo Tron there is Tessa, age 7 and Scott, age 9 in their first ice dancing competition, looking very serious but shockingly proficient at such a tender age. That segued into their passionate performance to Michael Jackson’s YouRock My World, ahip-hop on blades interpretation, also choreographed by Chouinard, that had the entire Rogers Arena on their feet.

Both Tessa Virtue and Scott Moir are completely without affectation – prima donna is not in their vocabulary and audiences of all ages are drawn to their humility. The vivacious Tessa is often the ‘straight man’ to Scott’s jokes and teasing.

“You know,” Moir continues, “we always wanted to strive to improve and be the best version of ourselves. Most athletes are like that, and frankly we haven’t been able to take the time to relax and enjoy our successes in the past. I think that knowing we were approaching the end of our ice dancing careers at PyeongChang was what changed all that.”

With endorsements pouring in (Virtue is the new face of Nivea Canada and Montreal’s BonLook Eyewear,) and an updated second book to be published in October, the pair have still not “officially” announced their retirement from professional competition. However, they’ve obviously pondered the decision.

“Scott and I are both interested in mentoring skating teams because we have so much experience with our three Olympic cycles. We don’t have it all figured out yet,” says Virtue candidly, “but we can offer some wisdom when it comes to training. We both agree that it’s time to give back to the sport – it’s our duty and responsibility.”