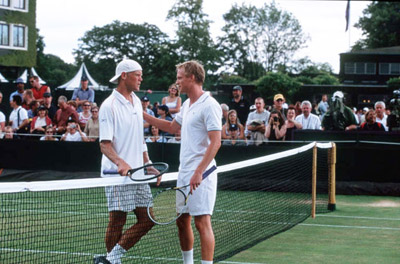 In the 1951 tearjerker Hard, Fast, and Beautiful, directed by Hollywood siren, Ida Lupino, a talented tennis player’s ambitious mother pushes the girl up the ranks of the professional tennis circuit. Lupino later said that the characters were based on fact, but would not reveal who the real-life models were for the tennis champ and her aggressive mother. She did say that the real-life daughter eventually abandoned her tennis career.

Fast-forward 54 years. Serena and Venus dish on Oprah about their new book Serving From The Hip: 10 Rules for Living, Loving and Winning and debut in their own TV reality show. Murphy Jensen, who with his brother Luke, captured the 1993 French Open Doubles title, creates a tasty little role as the obnoxious Dragmire in the film, Wimbledon starring Kirsten Dunst and Paul Bettany. Real-life Wimbledon champion Pat Cash, performed with rock group, INXS and formed his own band the Wild Colonial Boys, can be booked for gigs around the world. Andy Roddick, who hosted Saturday Night Live in 2003, was heckled by audience plant, John McEnroe.

“I can’t believe they’re letting you host, ” McEnroe hollered. I could do better than you! I was No. 1 for four years. You’ve been No. 1 for four days!”

Last season John McEnroe, who had already done many cameo roles playing himself as a tennis commentator in films, did get his chance to host his own late-night talk show for CNBC. It died a quick death but maybe that wasn’t the point.

Abandon their tennis careers? Far from it! These tennis titans have parlayed their extraordinary professional sports careers into lucrative entertainment cash cows and you get the feeling that success or failure, they are laughing all the way to the bank.

“I’ve always been an entertainer, even as a kid,” admits the manic Murphy Jensen who seems to be able to juggle several projects including writing a screenplay and hosting Open Access a behind-the scenes look at tennis tournaments, for U.S. cable TV’s , The Tennis Channel.

“I played the violin and guitar as a kid and even took tap dancing. That came in handy when I worked on my tennis footwork,” laughs Jensen.

When his brother was sidelined with a series of knee operations, Jensen moved to L.A. where he started playing tennis with celebrities like Mathew Perry and Wayne Gretzky.
“Tennis became a stepping stone into acting for me,” says Jensen. I don’t mean into ‘cameo’ roles either. Acting is so much like tennis. You have to react quickly and the process takes incredible discipline. I really feel like I’m finding my true voice.”

Fernando J. Hernandez, executive producer of Venus & Serena: For Real, the Williams sisters’ new reality show that debuts on ABC Family July 21, is in awe of what the sisters are capable of accomplishing. 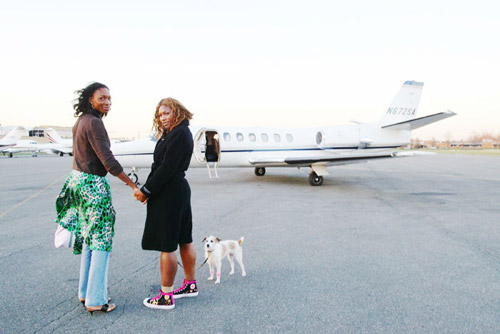 “Our goal was for people to see what the Williams sisters’ lives are like beyond the tennis courts,” says Hernandez. Our camera crews followed them around for months, interacting with their parents, talking about boys, juggling other careers. Serena’s clothing designs and Venus’ interior design company are taken very seriously by both young women, ” he explains. “Serena is perfecting her French and Italian and Venus plays the guitar and writes songs. They want to try everything and not be pinned down solely to tennis,” says Hernandez.
But, can players aspire to making a mark in Hollywood and still maintain their status and credibility as professional tennis players?

Canada’s “darling” Carling Bassett-Seguso thinks so. Once ranked as high as No.10 in the world, Carling was a thirteen-year-old snapping bubble gum when her entrepreneur father, the late John F. Bassett, produced Spring Fever in 1983.

“I think that it’s so important that kids try other things in life like Serena and Venus do. It’s healthy and gives them great self-esteem, ”says Bassett-Seguso. from her home in Florida, and now the mother of three junior ranked tennis players Holden, Ridley and Carling, who also have the acting bug. Combining sports and entertainment is a trend that’s here to stay so much so that professional tennis academies have begun teaching ‘life skill’ courses to juniors at least once a week, giving them the poise and self-confidence needed to conquer both the tennis or entertainment limelight.

Steve Shenbaum, is president of Game On a company that designs customized interactive group and one-on-one programs for athletes emphasizing communication skills. His first client was Pete Sampras who “was completely misunderstood by the media”.

Shenbaum, himself an actor, teaches at the IMG Bollettieri Academy in Bradenton, Florida where Bassett-Seguso’s teens train. He says “I think that it’s all about encouraging realistic goals. It’s great if a student comes to me with a true love of theatre or film. I just have a problem with someone who feels that they have to master two disciplines at once. Serena Williams is one of the very few who can do that.”

Perhaps McEnroe may not be another Jay Leno but like all professional tennis players with Hollywood aspirations, still got it right when he told the New York Daily News: “You always have something to prove and you have to continue to prove yourself.”