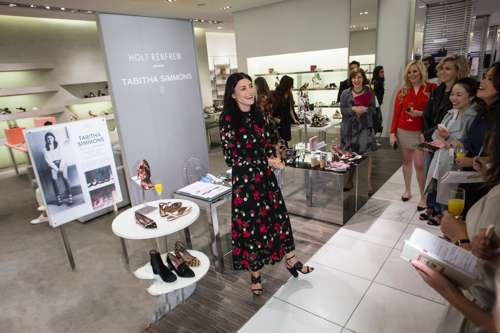 Tabitha Simmons is making great eye contact and if she’s checking out my shoes (they’re floral flats, but not her brand,) she’s being really subtle about it.

“My mother would kill me if I just looked down all the time to see women’s shoes first and never greet them properly,” laughs the charming English footwear designer 45, who has flown into Vancouver from New York, just days after attending the Met Gala. She’s here to launch her 2016 eponymous spring/summer shoe collection at Holt Renfrew.

Born in Cambridgeshire, England, best known for the historical university and some of Britain’s most glorious botanical gardens, it’s not surprising when Simmons explains, “I love flowers – they’re a huge inspiration for me as are many things from nature.”

Wearing her black suede Emi sandals with cut-out flowers on the instep, she has accessorized them with a black silk Dolce & Gabbana laser-cut dress covered in red roses. The ensemble gives the raven-haired, blue-eyed designer a bit of a Spanish vibe. “I always start with choosing my shoes first before I get dressed in the morning,” she laughs. 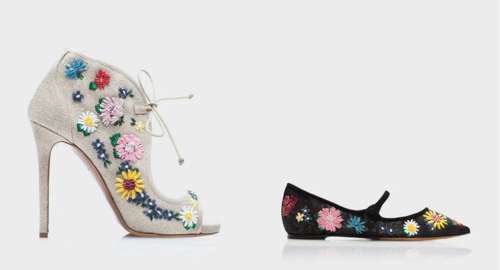 “When I was 14, I worked in a shoe shop every Saturday. I was spotted by an agent and started modeling . But I was too self-conscious, too awkward, I didn’t have the patience and really, it was a bit of a joke. I wasn’t good at that at all.”

What Simmons was good at was styling. With a degree in Fine Arts including set design from Kingston University, Surrey, she interned at London’s Dazed & Confused Magazine assisting at many shoots including those of the late designer Alexander McQueen, for whom Simmons ended up styling three of his fashion shows. “I feel very privileged to have done that. Lee was one of those very few designers who are very hands-on. Like Domenico (Dolce,) who can cut a jacket without a pattern, just by sight. Someone who has that level of technical ability is very rare.”

After a stint with Calvin Klein and visiting New York on a regular basis, Simmons really became interested in designing shoes. Her re-location to the Big Apple was well, a shoe-in, when she went to a party in Connecticut and was introduced to her future husband, photographer Craig McDean, by fellow Brit, model Karen Elson. (She and McDean often collaborate on shoots together and are now the parents of two boys, Elliott and Dylan.) 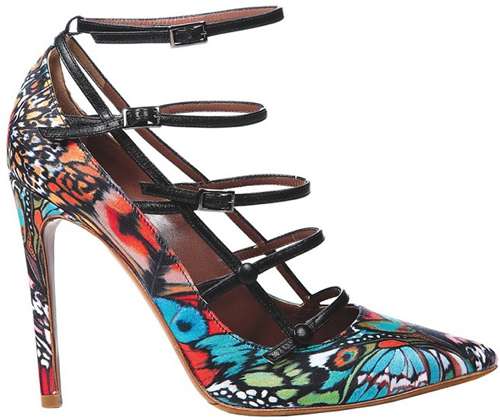 Simmons’ first footwear collection debuted in 2009 during Couture Week in Paris, and her brand has grown into a global business success story carried by over 60 luxury retailers world-wide. She has surrounded herself with top business advisors and is the first to admit, “When I started, my approach was very much like a fashion editor. I didn’t know anything about merchandising, competitive prices or about fighting with factories to make sure the shoes arrive on time. Those have been big learning curves for me.”

She continues to juggle styling for Dolce & Gabbana in Milan and Tory Burch in New York, with writing as a contributing editor to American Vogue. Simmons was named Accessories Designer of the Year at the 2015 CFDA Awards, the recipient of the CFDA Swarovski Award for accessory design in 2012 and British Fashion Award in 2011.

Created with comfort in mind (she test wears all her shoes prior to production, sometimes walking up to 12 hours a day in one pair,) Simmons has a delightful penchant for naming them after friends. Her collections are feminine, flirty with an unexpected twist. The Alexa, named after fashion model, Alexa Chung, are pointy, two-toned flats in a variety of textures and metallics; a pair of shimmering Hermione champagne glitter Mary Janes with a crystal button would certainly give Dorothy another glam alternative in Oz.  Dusty Meadow, floral embroidered lace and leather stilettoes, are astounding in their intricacy. “I’m just amazed at the Italian craftsmanship and hope it’s not a dying art,” Simmons muses.

Perhaps Marilyn Monroe was right when she said: “Give a girl the right shoes and she will conquer the world.”