Stu and Yvonne Goldberg: An Inseparable Partnership of Music & Art 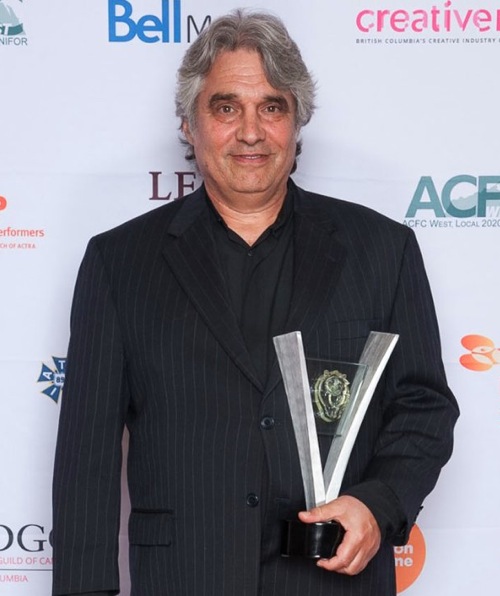 Imagine watching contestants racing around the world under terrible duress, experiencing excruciating weather conditions in every mode of exotic transportation from hot air balloons to rickshaws – in almost total silence.

“Music makes it exciting,” says composer-musician, Stu Goldberg, who helped establish the library of music for the 13-time Emmy Award-winning CBS television reality show, The Amazing Race. “Executive producer, Jerry Bruckheimer, wanted a soundtrack of wall to wall chaos but reflecting a sense of location from Italy to Thailand without being a travelogue,” explains Goldberg. “It was a tremendous challenge – 45 minutes of big action music and it had to be composed in three days.”

Luckily, ethnic music is one of Goldberg’s specialties, playing over fifteen kinds of drums indigenous to North Africa, South America, First Nations and a myriad of obscure percussion instruments from Brazil to Australia. 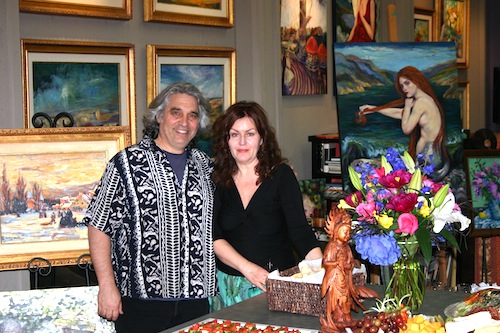 Perhaps best known in the Okanagan as a local jazz pianist, record producer for Anna Jacyszyn’s soothing vocals and composer of Stage Within for Ballet Kelowna, Goldberg’s modest demeanor belies his extensive accomplishments. He was a featured keyboard soloist at the Monterey Jazz Festival at age 17- when most teens are still playing air guitar in their bedrooms. Having toured and recorded with a variety of jazz greats like John McLaughlin, Freddie Hubbard and Wayne Shorter, Goldberg went on to a successful solo career in Europe, recording 14 albums before moving to Los Angeles as a session musician. One of those sessions happened to be as featured keyboardist among 100 musicians for Indiana Jones and the Last Crusade directed by Steven Spielberg and starring Harrison Ford and Sean Connery.

“John Williams is an absolute master to work with and he conducted live at the MGM studios,” reminisces Goldberg. “We had to sight read scores and were often under tremendous pressure, with little rehearsal time and of course Spielberg and Lucas there for every session.”

Over the years, Goldberg has composed hundreds of scores for film and television in Canada and the U.S., most recently for The Bouquet directed by Anne Wheeler and starring Danny Glover.

In 2014 he was the recipient of a LEO Award (celebrating excellence in the British Columbia Film & TV industries) for Best Score in a Documentary for Chi, directed by Anne Wheeler.

“I have to be a chameleon and compose, play, produce for all kinds of projects,” says Goldberg realistically.

“I love music and art – they are inseparable to me,” says painter, music teacher and Stu’s partner in life, Yvonne Goldberg. “My Dutch grandmother was a concert pianist and my mother kept this tradition alive by teaching me classical music and exposing me to opera, ballet and art.”

And not surprisingly, Goldberg met her husband Stu at one of his jazz concerts in Germany in 1980. They have been married for 30 years with three children.

European trained with a Masters Degree in Art & Music, Goldberg and family moved from Los Angeles to Penticton eight years ago. She saw an opportune niche to establish the one-woman YGO-Fine Art Gallery to showcase her paintings.

“Living here, with the beauty of the Okanagan’s light on the water; the unpredictability of the weather, sky and cloud formations; the shape of the rocks and mountains, really influences the depth and variety of my work,” she confesses.

Goldberg’s intuitive colour alchemy whether in oils, acrylic or pastels and her innate ability to metamorphosize her painting styles from impressionism, contemporary to the abstract, have made her large canvases of landscapes, portraits and still life, highly sought after. She loves the challenge of commissions and they are compelling additions to several wineries, corporations and private homes.

Her new series of paintings are a modern take on women painted by Old Masters, but set in the Okanagan. They are infused with Goldberg’s subtle humour: Oka Lisa, (after Leonardo da Vinci); her joie de vivre; Okanagan Mermaid (after John William Waterhouse) and Goldberg’s sensuality: Angel of the Valley, (after Abbott Handerson Thayer.)

“Although we work separately, Stu and I brainstorm together – we are never short of ideas. We’ve collaborated on CD covers for recording artists he has produced, photo shoots and my line of greeting cards based on my paintings. We always tease each other a lot,” laughs Goldberg, “but we can’t imagine our lives without being creative and each other.”