“Serendipity: The real magic in life – the moments of unexpected but fortunate discovery. It is the affirmation of optimism revealed to those with an open heart.” JK 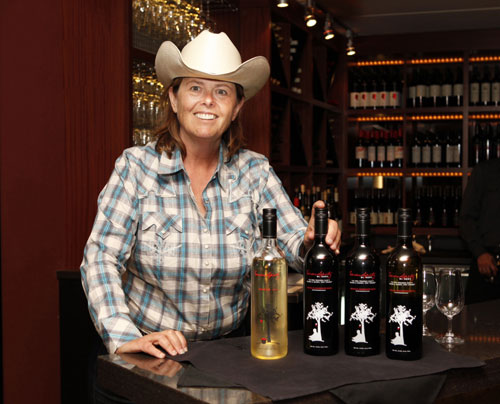 Like the innocuous apple that was said to have fallen on Newton’s head triggering his discovery of gravity, Judy Kingston’s Serendipity Winery on the Naramata Bench could not have been more aptly named. Her circumstances would zig and zag from a succession of serendipitous events that would eventually determine her life’s calling.

A successful lawyer specializing in computer law in Toronto for 25 years, her life was turned upside down when a massive car accident left her with substantial memory loss. Her career in law was over.

“The neurosurgeons told me they were doubtful I could learn anything new – I just didn’t know what to do with myself,” confides Kingston.

An accomplished chef trained in France, Kingston couldn’t stand for long periods of time anymore because she had to contend with a metal knee on one leg as a result of her accident.

Visiting the Okanagan on vacation in 2005, she saw a ‘For Sale’ sign on an apple and cherry orchard in Naramata and with the book A Year In Provence playing in her head, she thought “ ‘I can convert those apples to grapes. I love wine and it’s safer than law. The risk is my own.’” “By the time I had flown back to Toronto from Kelowna a few days later, the deal was accepted and the orchard was mine!” 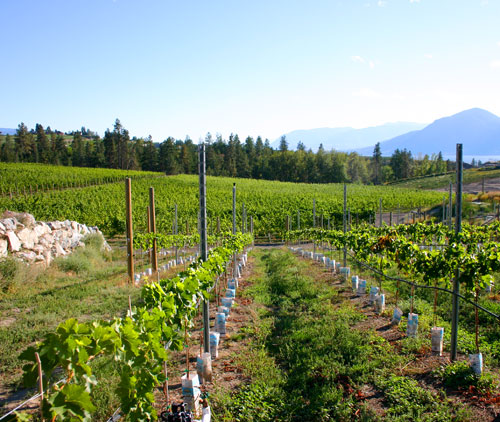 Naïve? Absolutely. But everyone underestimated Kingston’s will to succeed. With no experience, and not knowing anyone in Naramata, Kingston got to work immediately, arranging for the property to be excavated. In 2006 she moved permanently to Naramata and enrolled in Okanagan College’s farming and viticulture programmes. She started driving a tractor. And, miraculously, contrary to the doctors’ prognosis, she learned!

“In the spring of 2006, the property was completely re-landscaped to provide the optimum slope, soil types and orientation for the new vineyard,” explains Kingston. I hired Jason Parkes as my winemaker and he was fantastic. We designed the winery together, he taught me as we went along. In the Spring of 2007, I planted eight acres of vines with Syrah and Merlot as the main reds and Viognier and Sauvignon Blanc as the whites. I added plantings of Syrah, Cabernet Franc and a little Malbec for blending.” 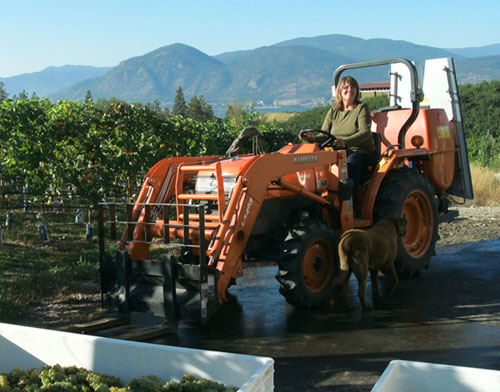 In 2008, their wine crush took place in Kingston’s garage using someone else’s grapes. “In 2011 on a whim we entered the prestigious San Francisco International Wine Competition. I like ‘blind’ competitions because if they had known we were a completely unknown boutique winery, the results might have been different,” admits Kingston. Serendipity Winery won Double Gold for their first 2008 Serenata Red Bordeaux blend.

Serendipity’s first harvest came in 2009 and was of exceptional quality- a testament to Kingston’s and Parkes’ incredible dedication and hard work.

“ But I had difficulty with my first Viognier,” explains Kingston “ with fermentation problems due to the slope of the ceiling of my garage and we realized that we needed a proper winery production facility fast.”

In preparation for the launch of Serendipity wines, Kingston worked as the assistant winemaker at a neighbouring winery and as a trainee winemaker in Martinborough, New Zealand during their harvest and crush. 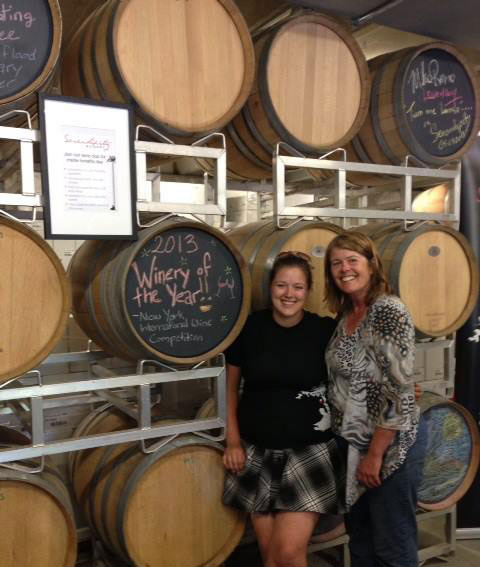 The 5,000 square foot winery building with U- shaped underground production, fermentation barrel room with wine shop and tasting room above, opened officially on June 18th 2011. “ We produced 2000 cases of our 2009 private vintage originally (Cab Franc sold out in a week) but this year I made a big leap forward and hope to ferment enough grapes for 6,000 cases in the fall,” says Kingston.

And how apropos that Kingston chose the silhouette of Sir Isaac Newton sitting under the apple tree with the fruit falling on his head as the Serendipity logo. Created by Toronto designer, Bekki Draper, a huge cast iron replica of the logo is the winery’s door handle and lights up at night. The design won Gold in the Label Series Competition at the 2013 San Francisco Wine Competition.

As an homage to her law degree and Kingston’s past life, White Lie and their red blend, Devil’s Advocate and a Rose were all introduced in 2012.

One of Kingston’s biggest challenges was selling to stores and restaurants. Like a one-woman juggling act, she’s constantly on the road when not in the vineyards. “I’d never had to sell anything in my life,” and seems surprised at her own success. She’s obviously a natural because in just two years has enticed over 70 retailers and restaurants throughout B.C. and Alberta to carry her wines including BC Liquor Stores that will stock Devil’s Advocate beginning in August. Kingston even did a sampling stint at this year’s Calgary Stampede.

The awards and accolades keep pouring in. “We are so excited that Serendipity has received 23 medals this year alone, enthuses Kingston.
In July of 2013, Serendipity scored a hat trick at the New York International Wine Competition, named B.C. Winery of the Year; awarded Bronze for their Merlot, Devil’s Advocate and Sauv Blanc.

Recently the winery team expanded with the addition of Kingston’s daughter Katie O’Kell , a biologist, who had planned to spend 9 months working at the winery before starting law school in the fall. She fell under the Serendipity spell and has decided to stay on, working on her winemaking degree with UC Davis online. A new consulting winemaker, Richard Kanazawa (coincidentally one of Kingston’s former instructors at Okanagan College) replaces Jason Parkes and a Vancouver PR firm, Town Hall has lightened the load from Kingston’s shoulders in the marketing department.

With plans to open a restaurant adjoining the winery by the summer of 2014, Kingston, like a mother whose baby is quickly growing up, is slowly learning to delegate, although she still drives the tractor working in the vineyard.
“I’m trying not to micro-manage,” she laughs, “ but just maybe the chef at my new restaurant might let me do a bit of cooking!”