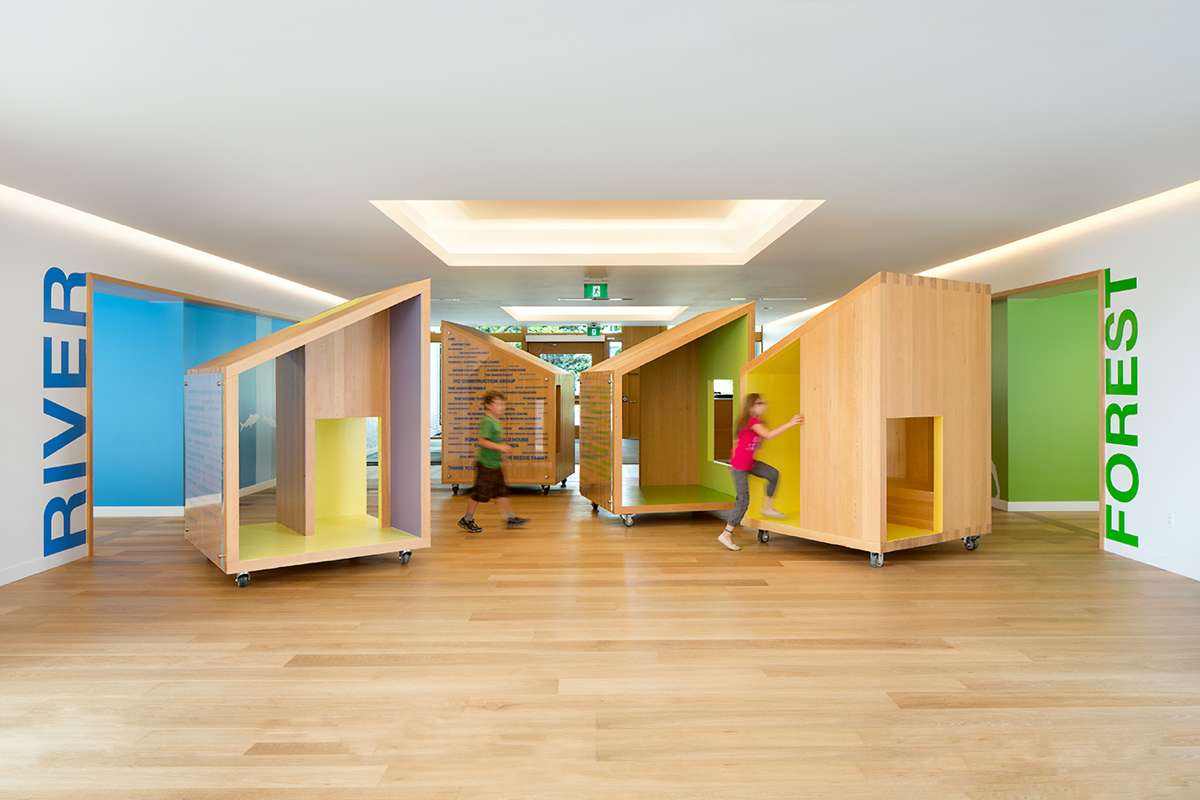 The old adage ‘it takes a village to raise a child’ is a mantra practiced by Richard Pass throughout his long career in the social services industry. Empathy and, what appears to be boundless energy made him the perfect candidate for CEO of Ronald McDonald House British Columbia & Yukonin 2006. Previously, a Ronald McDonald House in Shaughnessy accommodating 13 overwhelmed families of critically ill children who travelled to Vancouver for life-saving treatments was just not large enough to meet the demand. So Pass, never one to rest on his laurels, spear-headed a campaign raising $32 million to build a new House on the grounds of BC Children’s Hospital.

“I had a vision of how the House that would now accommodate 73 families, should be because I had visited about 34 around the world,” says Pass during a tour of the jaw-dropping 74,000 square – foot building designed by award-winning Vancouver architect, Michael Green, and now the fifth largest Ronald McDonald House in the world.

They were adamant that it not resemble a boutique hotel but remain family-friendly with all the bells and whistles that would enthrall kids. “We did interviews with many of the original families that had stayed at the first House and because most were oncology patients, they were really concerned about the disinfectant protocols. ‘What about the germs?’ Basically they were asking ‘how do we get that supportive feeling of arms wrapped around us in a bigger house?’”

Green came up with the answer: build 4 houses with 18 families in each house or pod characterized by their own distinct art, colour palettes and identities for toddlers to teens but interconnected by common spaces and their own kitchens. Oncology and other diagnoses with a high disinfectant protocol were in a different house than short-term families. The longest family residency has been a staggering 497 consecutive days. 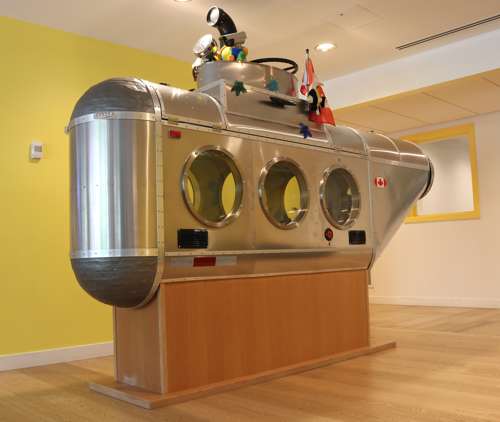 Following an 18-month build the new Ronald McDonald House opened in 2014 and is nothing short of spectacular! Taking a cue from a child’s storybook, adults enter the building through a large door while children have their own pint-size entrance into The Grand Living Room. “When we asked families what they’d like in the new building, a little three-year-old girl said ‘a slide’ “Pass  relates. And sure enough, a canary yellow tube slide snakes its way down from the 2ndstorey landing right into the Living Room. A gigantic submarine fish tank designed and built by Jeff Tom of Something FishyAquariums Inc., also provides a mesmerizing gathering spot for kids and parents alike.

Stunning timber architecture introduced by Green in Douglas fir, and interior structures and furniture of yellow Cedarwood leave no doubt that the building personifies the Pacific Northwest.

Each family bedroom has its own air intake facility with distinct features in some rooms for the  visually and hearing impaired.

Every house has a kitchen and two houses share a dining room. “We have a food program in which we partner with Save-On Foods Pantry Program where we can order online and put groceries right into each family’s shelves and fridge,” Pass explains. “This saves them about $6,000 a month. Let’s face it,  who, after a day of tests and stress wants to go grocery shopping?”

“We have an art committee who sent out invitations to artists all over B.C. & the Yukon for donated original art to tie-in with House themes for Forest, River, Mountain and Beachso that families could immediately relate to their own environments back home,” says Pass. 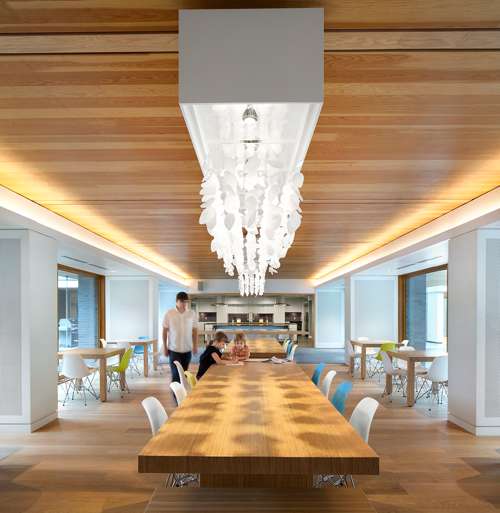 A sense of playfulness and adventure pervades the atmosphere in which immense floor-to ceiling sliding glass doors open to an outdoor amphitheatre in which theatre troupes and musicians are invited to perform. A courtyard with a serene koi pond and seating area is a quiet respite from the boisterous basketball court further away. Gardening, a calming activity for many, is encouraged by volunteers from VanDusen Botanical Garden who have worked with families to plant vegetables and strawberries.

Inside there is a crafts room, teen lounge with video games (often frequented by fathers,) Lego robotics room, yoga, music room and not to forget the parents, a fitness room and even a place to have a manicure and your hair cut.

“You know, we’ve tried to think of everything from private areas for the not so good days to public spaces where families can connect with each other and other families, especially parents who might be feeling really alone with their concerns,” says Pass.

A Family Dining Programme encourages the community to come in and actually cook dinner for residents. The 17th annual A Night To Dream Gala October 4th brings together philanthropists business leaders and families staying at the House for an exciting evening of dinner, silent auction and entertainment to continue to raise funds for Ronald McDonald House British Columbia & Yukon.

“There is such a huge need so our goal is to expand the House to accommodate even more families.” Pass emphasizes. “Although the majority come from B.C. and the Yukon, BC Children’s Hospital’s exemplary care is world renowned and we’ve had families here from across Canada and as far away as Zambia,” says Pass.