BY LAURA GOLDSTEIN
Special to The Globe and Mail 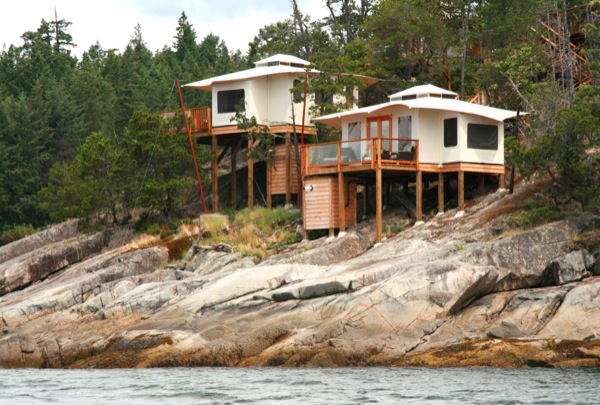 Spoiled Alert: If the smell of mildewed sleeping bags, schlepping your own tent, not showering for a few days and using leaves for toilet paper is not your cup of Dom Pérignon, Vancouver based interior designer, Lucille Fares of LMF International, has created the answer to your camping quandary.

She has designed Rockwater Secret Cove Resort’s permanent luxury Tenthouse Suites , the first of their kind in Canada. Sequestered amid a lush rain forest near Sechelt overlooking Georgia Strait along B.C.’s spectacular Sunshine Coast, they channel memories of Swiss Family Robinson and Tarzan (without access to a decorator, of course.)

“I wanted the 16 X 24-ft tents to look like a scalloped bird’s wing on steel cables, hovering above the sea and forest,” says Fares.

She worked closely with Kirkoff Engineering, as each tent was built on a 24-ft. X 24-ft. platform facing the ocean, atop solid steel stilts embedded and cemented into rock face at various levels throughout towering Douglas firs and arbutus trees.

The luxury tents are made with Sunbrella canvas fabric with casements of zippered screens and roll-down plastic for inclement weather. Interiors were ingeniously designed with all the senses in mind: Upon entering the fir- trimmed glass doors, wafts of scented air from the simple, locally built cedar and fir furniture and king-size bed, is instant aromatherapy. A whirling ceiling fan attached to a glass and canvas cupola draws the eye upwards to silhouettes of leaves and branches on the roof’s exterior. Stunning grey, tan and honey- flecked slate tiles offer radiant in-floor heating for cool mornings in addition to a stand- alone gas fireplace. On one side is a thermo-jetted Ultra Bain tub big enough for two with subtle light therapy features while across the room, the slate inlaid walk-in shower boasts a huge rainforest showerhead. 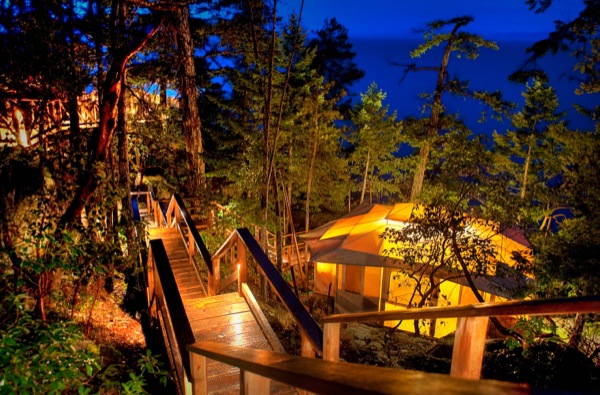 The subtly lit 1,500-ft meandering cedar boardwalk suspended above a ravine has private staircases leading to each tent and resembles a scene from A Mid Summer Night’s Dream at dusk.

“The Resort was formerly an old non-descript fishing lodge, Lord Jim’s, bought in 2005 by Rockwater Properties, a partnership in Calgary, “ explains General Manager, Dikran Zabunyan. “The luxury tents were built in two phases ; six in 2007, seven more in 2011 and there will be 15 by 2015. The vision was to create a unique, upscale, rejuvenating experience with nature, in which luxury tents would enhance – not compete with the environment. “

Born in the UK, brought up in Egypt then East Africa, Fares lived in Dubai for 18 years with her late husband before moving to West Vancouver. Her exotic travels and love of architecture and beautiful textiles (she is the Canadian agent for Fermoie Fabrics, the British brand created by Tom Helme and Martin Ephson founders of Farrow & Ball,) have influenced her decorating for private homes, a consulate and hotel interiors in the Middle East, Europe and the Orient.

“One of my most difficult challenges was where to put the loo inside the tent,” admits Fares. “I had shoji screens custom designed by Coquitlam furniture maker, Tim Ewert who spent 20 years in Japan. “

“The real test of Rockwater’s Tenthouse Suites came during a severe wind and rain storm shortly after their completion. Everything was still standing and intact– that’s the best news a designer can have!” beams Fares.

The writer was a guest of Rockwater Secret Cove.