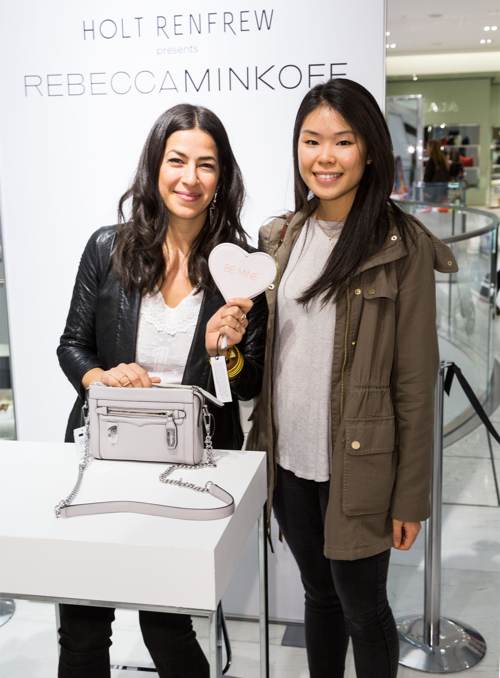 Once upon a time there was a very creative little girl in San Diego, California, who wanted a very pretty dress. Her exceedingly smart Mother said no to the purchase, but taught her daughter to sew instead. When they moved to Florida, Mom even paid for advanced sewing and design classes for her when her daughter got older and impressively more talented. (There’s a Prince Charming CEO in this story, but he comes in much later in the guise of her older brother.)

Dressed in her trademark edgy black Wes Moto motorcycle jacket, offset by a white lacey tunic and speckled black canvas slip-ons, Minkoff explains laughing, “Oh those are just my comfortable, running around airport shoes and not my own brand. I’ll put on my own shoes later for the signing.” She is as down-to-earth and approachable with a playful side, as her eponymous label’s accessories and clothing.

Minkoff moved to New York at age 18 to pursue a fashion career and launched a five-piece apparel line in 2001. But it wasn’t until her friend, actress Jenna Elfman appeared on The Tonight Show with Jay Leno wearing Minkoff’s sexy off-the-shoulder riff on the ‘ I Love New York’ T-shirt, that her career started to take off. “I spent the next six months sewing T-shirts on my living room floor,” says Minkoff. 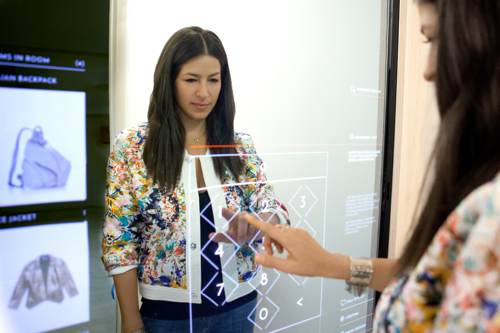 By 2005 she was struggling to launch her fashion line and after blowing her $10,000 in savings on a photo shoot, Minkoff realized she needed help to stay afloat. “I called my father who said ‘call your brother!’ ” Minkoff relates. Uri Minkoff didn’t come riding in on a white stallion. Far better, the young entrepreneur, 39, who founded Fortis Software LLC, put his savings and considerable tech savy into the formation of Rebecca Minkoff LLC, New York. They re-adjusted their focus on accessories and launched a handbag collection with a brilliant social media strategy that continues to this day. Zeroing in on the 18-35 Sex In The City demographic through word-of-mouth on Daily Candy and later, Facebook, Rebecca’s ‘Morning After Bag’ designed after the iconic leather satchel, became the must-have affordable luxury at $300. It sold like crazy. Other handbag styles like ‘The Lover’s Clutch’ and ‘The Affair’ soon followed with price points beginning at $175 incorporating studs, tassels and fringes and of course, extra interior pockets for a girl’s wireless devices.

Then Minkoff’s products started showing up in retail stores like Nordstrom and Saks Fifth Avenue and on the arms of celebrities like Reese Witherspoon, Halle Berry and Keira Knightly. By 2009, Minkoff was able to come back to her first love – apparel design – with her ready-to-wear-collection and the lifestyle brand is now carried in over 900 stores world-wide. Their first stand-alone store opened in Tokyo, Japan in 2012, followed by their flagship stores in Soho, New York and San Francisco. A Los Angeles store opens this summer with Chicago later in 2015. Continuing to expand globally, a store in Hong Kong opened in April and several shops within stores in South Korea. Ben Minkoff, named after their late grandfather, is the men’s leather goods spin-off and is handled by Uri. 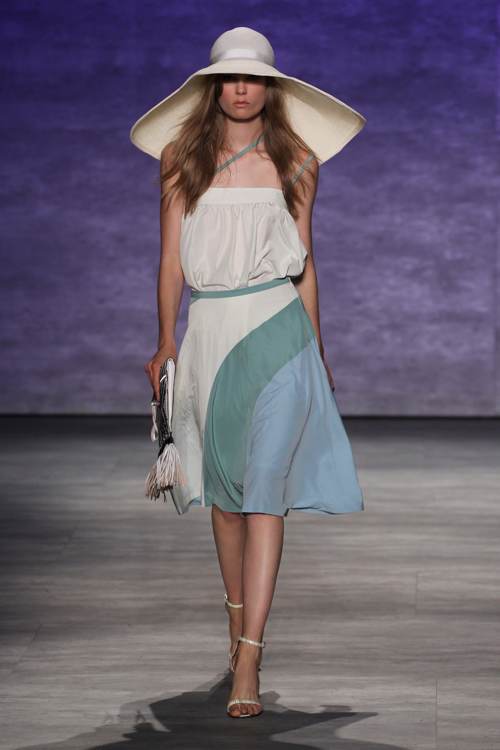 Rebecca demontrates how easy it is to use the touchscreen in their Soho N.Y. store. developed in partnership with eBay Inc., customers are able to shop looks from the ‘connected wall.’ Photo courtesy Rebecca Minkoff LLC New York.
“We wanted our shoppers to be immersed in a totally interactive experience in our stand-alone stores,” says Minkoff. “So Uri came up with the ground-breaking innovation for our stores in NY and San Francisco, developed in partnership with eBay Inc., of using touchscreens. Our customer is able to shop looks from our ‘connected wall’ from where her desired color and size will be sent to a fitting room that’s equipped with RFID technology and custom lighting options. Our sales associates all use iPads and she can even pay using e-commerce from the fitting room. More than anything though, I wanted the experience to be easy – like being able to ask an associate for another size by simply touching the screen on our dressing room’s ‘magic mirror.’ ”

“Twitter just launched Periscope, a free, live video streaming app and we’re already on it,” says Minkoff proudly. She debuted a line of tech-enabled jewelry in 2014 including cocktail rings that vibrate in four patterns; bracelets that have the ability to send small-range notifications and even a lightning cable that doubles as a bracelet.

With all their emphasis on technology, Minkoff is adamant that connecting with her customers face to face and getting their feedback is still of vital importance. “We truly listen to their suggestions – whether it’s lengthening a bag’s strap or colors for future collections,” she says.

It seems to make all the difference as Rebecca Minkoff LLC New York has become the number one independent accessories designer in the U.S., with Forbes estimating the company’s worth in 2014 at $100 million.

And that’s no fairytale.

Q&A GETTING PERSONAL WITH REBECCA MINKOFF

It can be really difficult working in a family business. What’s the secret to you & your brother getting along?

Oh we fight all the time! But we always try to work things out. We’re a very close family. I’ve only had to call my father once to settle a dispute. We divide things up so that Uri looks after all the business and technology and that frees me up to design but we still talk about everything. The only thing that drives me crazy is that my Mom insists on paying for her bags! I say Mom, please don’t do that – you’re part of the Company. But she insists.

You are a very strong proponent of business mentoring women entrepreneurs & charitable causes-why?

Giving back has always been important to our company since the very beginning. I’m the mother of Luca Shai, 3 and baby, Bowie Lou, so teaming up with Jessica Seinfeld’s Foundation, ‘Baby Buggy’ to design a nursing tank was a natural for me. Partnering with Nordstrom for ‘ Piece & Company’ connects female artisans from Third World Countries with major brands and the stores sell a capsule collection (for which Rebecca Minkoff created her Mini Mac crossbody bag in leather and a backstrap with a loomed textile,) and also supporting ‘Every Mother Counts’ founded by model, Christy Turlington Burns.

How did you come up with the name Bowie for your baby girl born last year?

I named my daughter Bowie Lou because when I was pregnant with her, my husband Gavin Bellour, was listening to a lot of David Bowie at the time. We thought it was fitting. When I was pregnant with Bowie, Luca, our little boy, called her ‘Gouda’. I’m not sure where he got that, but we thought it was so cute, so that was a nickname that we used all throughout my pregnancy when speaking about Bowie, ‘Baby Gouda.’