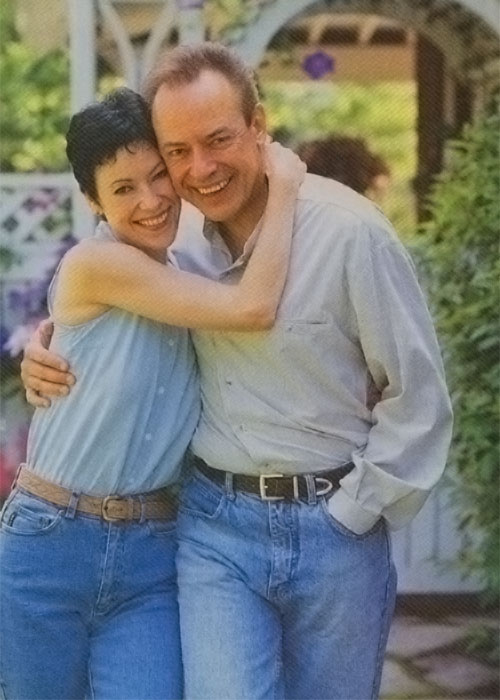 When Ross Petty and prima ballerina, Karen Kain lived in Cabbagetown, a Victorian enclave in the heart of downtown Toronto, Petty, who loves a challenge, thought nothing of renting a crane to haul up bags of soil to a third floor deck in order to create a spectacular oasis to compensate for a tiny backyard garden. He was delighted then, to discover that their new home, a 132-year- old brick farmhouse in North Toronto with gingerbread cornice pieces and a blue- grey wraparound veranda boasted an enormous but unlandscaped garden just burgeoning with potential. After a previous owner showed the couple a sepia photograph of the original 1865 homestead with clematis tenaciously clinging to the front porch, Petty knew it was a good omen.

“What a lovely coincidence for me because clematis is my favourite vine,” he confides. An intrepid gardener, he cultivates about 30 different varieties, their magenta, pale pink and mauve star – shaped flowers with pods like exploding fireworks and grasping tendrils benignly creeping about the property. “I’ve chosen them to grow throughout the seasons and the most lovely for me is the Vyvyan Pennell because it’s a double, deep violet blue flower with a purple and red centre that blooms early in the summer but comes back as a single lavender blue in August. It’s magical and I love their durability and their great fight for life because they grow in the smallest amounts of soil.”

“When we moved in four years ago,” explains Petty, “everything was covered in euonymus but I didn’t throw it out. That’s the thing about being a gardener you always try to salvage everything. I basically transplanted it and made it into the backdrop fÿor everything else. You know, it’s ironic that you work so diligently to make it work-free but a perennial garden is never care-free.”

He particularly enjoys experimenting and in the first season cut all of his clematis down to the first bud nodule above the ground to induce massive stem growth. He says “ often people are so afraid to do major pruning but I’ve found that it benefits a lot.” It also helps that the entire garden is organic. “I use only sheep manure and composte and everything seems to thrive,” says Petty.

Surrounded by a quaint lattice fence and rose and clematis arbours, one immediately recognizes how true Petty has been to his original vision of a rambling, old-fashioned garden; a charming companion to the farmhouse, in which things grow naturally without formality and pretence. And although the garden is his domain, Kain is unquestionably his Muse and their shared philosophy is reflected therein: “It’s sort of a natural chaos and I love that,” says Kain. “We didn’t want anything too structured.”

“The L-shaped garden, divided into various charming groupings of trees and over-flowing pots, flagstone patio and rose garden, is the progeny of serendipitous finds and plain trial and error. It is bordered by towering, vibrant blue delphiniums, mauve and green-striped bees’s jubilee, pink peony, salmon-coloured sedum, fragrant electric purple iris germanica Superstition and flourishing yellow Oriental daylilies. Two wrought-iron arbours covered in tropical pink and yellow mandevilla form the entrance to a hidden cucumber enclave, once Petty’s “secret pickle garden”, and now filled with perennials. But the focal point of the entire garden is a melodious three-tiered Japanese pond that Petty ”built as a surprise for Kain.

“It’s very much an ad lib situation,” laughs Petty modestly, squeezing snapdragon-like turtleheads to expose the creature with-in. “I didn’t really draw it out first, except for the more formal rose garden and there I wanted a suffusion of fragrances and a good colour blend from copper and apricot to the pinks, yellows and just a little red, but sometimes I think I’m a little too concerned about complimentary colours.” 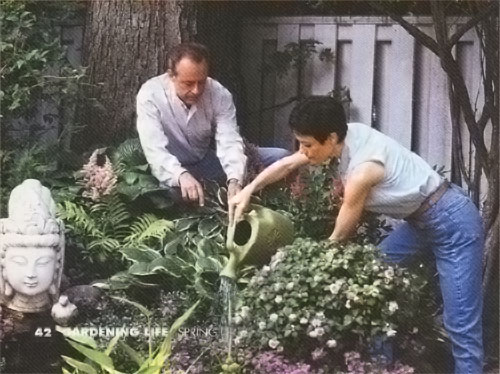 Kain adores roses and although she has received countless floral tributes throughout her career (ironically, a racehorse, not a rose has been named after her,) flowers will never become mundane.

Of the twelve rosebushes in the “formal” garden “my favourites are the pink and yellow Peace and Chicago Peace roses and I love peonies,” says Kain. “I know that if Ross weren’t in my life, I might have a small garden but I’d never go to this much work – it’s an all-consuming passion for him. When he’s out hereÈ it’s all I can do to get him to stop just to have a bite of lunch! I’m just happy to be able to enjoy it.”

In 1992, Petty accompanied Kain on a performance tour of Hong Kong and Japan. He was so inspired by the ponds and gardens he saw there that he decided to return three weeks early to build a pond and surprise her. No one, however, could predict how frustrating this project would become but Petty remained undaunted.

“On a wing and a prayer I started to dig a hole in the ground – no pond kits for me,” jokes Petty who refers to himself as a “novice addicted to gardening magazines.” “The biggest problem was that where I wanted to position it in the garden was not where the experts advised me to place it. A pond should be where there is a fair amount of sun to prevent algae from growing. I wanted it in a very shady area at the base of a maple tree and in hind-sight I should have re-considered my position because there were so many tree roots to dig out!”

“The most difficult part was adjusting the three-tiered waterfall to make just the right sound – it took forever and nearly drove me crazy,” he confides.

How appropriate, that an exquisite bust of Kuan Yin, the Chinese goddess ‘who pays attention to sounds and hears prayers,’ designed by artist David Drum, sits serenely on the crown of the pond with two stone doves as sentries. In the evening, lit from a spotlight beneath the water and shooting upwards, “Kuan Yin’s smile becomes our Mona Lisa,” says Petty.

“Unfortunately, we haven’t had much luck with frogs, turtles or koi in the pond,” says Kain. They don’t last the winter and this year the little girl nextdoor brought over a pail and asked if she could chip one of the frozen goldfish out to take to school for her science project.”

“We love to entertain our friends here and sit outside at night,” says Kain, looking up at a graceful sour cherry tree that attracts blue jays, cardinals and nuthatches year round. “I know it’s a cliche but I think that this return to the joy and interest in our homes and gardens is all part of “cocooning”. Maybe it happens when you reach your 40’s and you appreciate those things that much more.”

Meantime, the zealous Petty has already started work on his next project – a massive rock garden on both sides of his driveway.” I love reinventing new gardening areas,” enthuses Petty and this is going to be a rather splendid entryway to the house.”

Perhaps a cherub-adorned stone tablet given to the couple by Kain’s parents and mounted amid the greenery, best expresses the pleasures of their garden:

‘There is always music amongst the trees in the garden, but our hearts must be very quiet to hear it.’