I WORE THE WHITE JERSEY (FROM THE GAP), PRESSED THE PEDAL TO THE METAL AND SIPPED WINE WITH OLYMPIC CYCLING CHAMPION, STEVE BAUER

Steve Bauer has great calves. The Canadian Olympic Cycling silver medalist who rode in 11 consecutive Tour de France races, wearing the coveted ‘yellow jersey’ as leader in the 1988 and 1990 races, isn’t even sweating.

He is leading a group of 25 intrepid cyclists on a sweltering Saturday as part of Steve Bauer Bike Tours’ 32 km full day excursion to several of Niagara’s most delightful wineries. 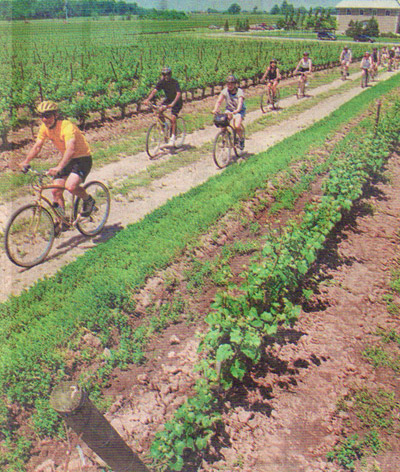 Personally, I am very relieved to discover that 14 of the tour participants are a group of doctors from Markham-Stouffville Hospital. The fact that most are gynecologists still means they have medical training and that they probably remember CPR from medical school or what to do about heat stroke and dehydration. I decide to inhale and not swallow at the wine tastings.

Mr. Bauer, 41, who grew up in Fenwick, Ontario near St. Catherines, retired from competitive racing in 1996. But it was his Belgian-born wife, Annick who pointed out that the Niagara area was as conducive to scenery and wine production as many regions in France that annually attract thousands of cyclists from around the world.

“When I finished up my racing career, it left a void in my life but I just didn’t want to go into coaching because that would take me away from my children,” explains Mr. Bauer who has two children from a previous marriage. When Annick and I started to talk about the lifestyle in Niagara- the Shaw Festival, wineries, great restaurants and hotels that attract so many fit, active people to the area, the lightbulb went on.”

The two partners have built up their business slowly in the last four years and are strategically allying themselves with well- known hotels, wineries and bed and breakfasts in the area to target individuals and corporate groups who are looking for an exciting and healthy break from conferences or meetings.

“Our versatility is our strength,” explains Mr. Bauer. We will work with groups to put together side trips that include a variety of interests including Niagara Falls or both cycling and hiking to accommodate all skill levels. It’s amazing how people will underestimate their own abilities and we make enough stops for lunch and wine tasting to make it very enjoyable. Our support vehicle always drives along with us and we don’t lose people,” he laughs.

Base Camp is ‘The Yellow Jersey’ the Bauers’ bike shop and cafe in Queenston Village where we saddle up Schwinn gold and black bikes for our trip. Leading with my stomach, I less than discreetly ask what time we eat a picnic lunch (prepared by the chef from Queen’s Landing) after the wine tour of Chateau Des Charme. No fear of dehydrating or noshing along the way because Mr. Bauer’s attentive staff on bikes and in the Ford Explorer support vechicle, keep us in cold water, Power Bars and fruit throughout the day. I figured the protein from the bugs I was ingesting from panting through my mouth would tide me over until lunch anyway.

I have finally learned the meaning of  the expression, ‘going nowhere fast’. Don’t get me wrong. We did go somewhere and with great enjoyment. But twenty-three bicycles had passed me by the time we reached our last stop at Marynissen Estates. (But I knew I’d have the last word.) My husband made me promise not to mention that he was in the Israeli army but would ride with me anyway. And, I’m very proud to report that I arrived back at “The Yellow Jersey” without resorting to tossing my bike into the back-up vehicle for the last 8 km along the Niagara River.

Mr. Bauer also conducts training camps in Niagara for die-hard cyclists; has taken groups on cycling tours of Costa Rica and this July will guide two tour groups to Europe, staying in luxury hotels along the way, to shadow the Tour de France.

Not for the faint of heart, several of Mr. Bauer’s experienced cycling clients have been asking him for years to lead them along the greatest cycling road race in the world. The first trip July 9-16 will follow the Tour in Provence and the Luberon Valley including an attack on the 2000-ft Mont Ventoux before the race! Mr. Bauer has also arranged passes to the VIP tents to mingle with the international cyclists in Avignon.

“From July 16 to 24, our expedition will start in the French Alps just in time to witness an impressive mountain stage in Morzine,” says Mr. Bauer. The thrill of the technical decent is amazing, “ he enthuses. “We will shadow the race through France, the central valley of Switzerland to the Vosage foothills in Alsace and finally along the Champs Elysees to the finish. I am particularly excited because my former teammate, American Lance Armstrong, will be defending his title of last year.”

“This will be a nostalgic trip for me,” admits Bauer. I don’t know what emotions it will bring out in me. I’ve raced the terrain so many times – a finish here – a spill there- but I’ll be giving my groups my expert insight into this amazing event.”

(By the way, do you know that those doctors never spit the wine out when they taste?)

For information on Steve Bauer Bike Tours Inc. in Niagara and his guided trips to The Tour de France: (905) 562-0788 www.stevebauer.com