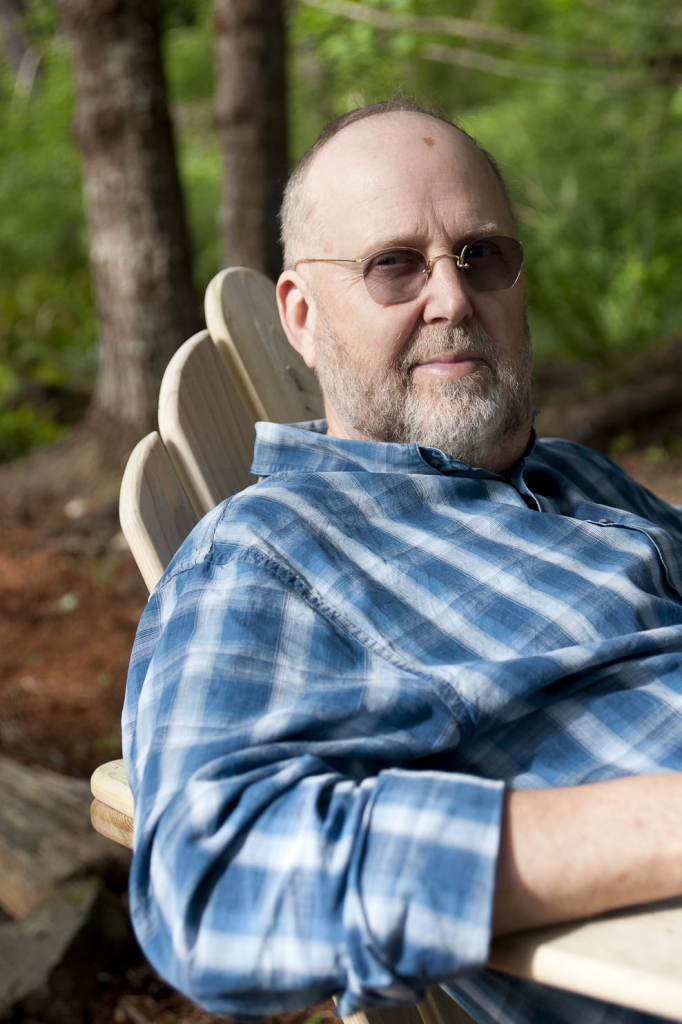 Viewing the immense Salt Spring Island property from the north pasture, there is a bucolic peacefulness that immediately calms the soul. Based on an 1850 Shaker meeting house, pink heirloom Constance Spry roses languidly climbing its shingles, the house is set amid towering Douglas fir trees and terraced gardens – a vision plucked from any number of his period films.

“This is my sanctuary, I feel protected here” says Canadian, Jim Erickson, 2013 Academy Award-winner for Production Design (with Rick Carter) for their historically meticulous work on Steven Speilberg’s iconic Lincoln.

“My late partner and I purchased the property in 1990. As soon as I saw it – almost 9 acres, south-facing gardens and a view of the valley, I thought that when we retired, we’d never have to leave! It also didn’t hurt that I also found the most fantastic hand-made parmigiano reggiano right here on the Island, “admits the soft-spoken 63- year -old with a rather dry wit. “We had always kept journals and scrapbooks filled with ideas. Friends said why don’t you design the house? I liked old and Rod liked new so we compromised. With the help of my friend, art director, Michael Diner, who was able to pull the forms and lines out of my brain and get them onto a piece of paper, it took about two years from drawings to completion.

Born into the tiny farm community of Badger, Minnesota, Jim Erickson’s theatrical aspirations were realized when he accepted a scholarship at the Banff School of Fine Arts in Alberta. He fell in love with Canada, and by 1974 had immigrated here, working at CBC-TV Vancouver as in-house prop master. So would begin a circuitous path that included set decoration for over 35 films and TV productions on locations all over the world, then returning to retire to the province that launched his professional career.

From the vibrant red front door “it represents the hearth- so welcoming” – to his penchant for juxtaposing unusual art collectibles discovered in markets and bazars from exotic film locations with contemporary paintings, indigenous woven baskets, religious icons and eclectic antique furniture, Erickson is more interested in the memories they evoke rather than their monetary value. Few souvenirs from actual sets have a place in his home. From set decorating for Mississippi Burning (1985) to boxing epic Ali (2001) and Water For Elephants (2011), “it’s become almost impossible to keep props,” he explains. “I wanted to buy a truck-load of furniture from Lincoln and made them a great offer, but they wouldn’t let me- said they needed everything for re-shoots.”

Erickson used documented colours from Old Village Rittenhouse paints on the walls in buttery yellows, sage greens and colonial blue to underscore the feeling of historical authenticity and airy continuity throughout his home. A Burmese 17th Century stone monk he bought while working on Beyond Borders (2003) in Thailand starring Angelina Jolie and Clive Owen, inspires a meditative pause from the staircase alcove.

“The more energy I invested in building the property, the harder it was to leave each time for a film shoot,” explains Erickson, a statement fully realized when his work on Seven Years In Tibet (1997) starring Brad Pitt turned into a 13-month odyssey, shooting in India, Argentina, Chile, Tibet and Vancouver. It did enable him to discover and bring back treasures like the rare hand-painted floral Tibetan chest for his 2nd floor landing; Japanese wall hangings and exquisitely embroidered Burmese tapestry over an intricately carved monk’s table. The red patterned Chinese rugs in his den mix handsomely with his Stickley Mission oak bookcases, on which Oscar nonchalantly resides .

When asked the meaning of all the Buddhist icons and figurine of Jesus, Erickson candidly replies- “I don’t know, I’m an atheist- I just like the craftsmanship and that it’s a good piece of art!”

It was here in his den that Erickson (in a tux ) with friends and family gathered to watch the 85th Academy Awards on television when the flu prevented him from attending in person. “I didn’t believe it at first when they announced my name,” admits Erickson who was also nominated in the same category for There Will Be Blood in 2007, (his 3rd film with actor, Daniel Day-Lewis) “and we all threw popcorn and champagne into the air!”

His 16’ X 20’ master suite, reflects an austere Shaker ambiance and Erickson’s love of crafted wood is the room’s centerpiece: a hand-hewn bed by Karen Trickett of Coventry Woodwork in Duncan B.C. A collector of contemporary paintings, Erickson purchased the Picasso -inspired piece by artist Vergucht, in New Orleans when he worked on My Own Love Song (2010) starring Renee Zelweger and Forest Whitaker. His love of hand-made textiles is evident when he describes his very important collection of over 400 antique bed quilts stowed carefully away. When asked the secret to prevent yellowing he replies “ let them yellow- it just gives them more character! “ 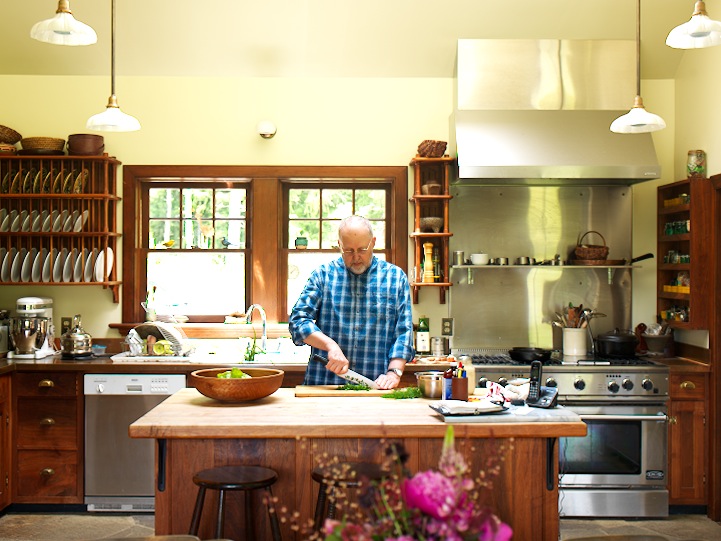 Though he might catch a few winks on his living room sofa, you will most often find Erickson in his kitchen. A prodigious cook and bread-maker who loves to throw an annual New Year’s Eve party for 70, Erickson’s kitchen over-looking the dining room, is a mix of high tech meets Downton Abbey. DCS stainless steel appliances including a multi-level oven with grilling capacity, dishwasher and SubZero fridge are all seamlessly integrated into accessible black walnut cabinetry he designed like a 19th century butler’s pantry. The raw copper countertops, a risky choice for food preparation, in no way inhibits Erickson. “Do you know what happens when vinegar spills on copper? It turns blue and looks amazing! The top of my island chopping block is maple and I love all the cuts and stains. The floor is made from local green sandstone from the most northern part of the Island and believe me, it’s totally unforgiving if you drop something on it,” he laughs. “That’s okay because I want my house to breathe and change over time.”

‘Mighty oaks from little acorns grow.’ Erickson knows all about that. An expert gardener- usually with his beloved miniature Australian shepherd, Miss Lucy in tow, he enjoyed picking up roses and orchid cuttings from anywhere in the world he found himself on location. Rooting them in his potting shed, they miraculously proliferate to this day throughout the property. “I’ve dug all the flower and vegetable beds and planted everything myself. I do everything but mow the lawns.” Shooting The New World in 2005 the historical drama based on the life of Pochahontas, directed by Terrance Malick , Erickson picked up an acorn at Dorney Court , near Windsor Palace, England. He planted it when he returned to his home on Salt Spring Island and the oak tree is now 12 feet high!

In April 2013 the Set Decorators Society of America honoured Jim Erickson in Hollywood with the Earl Cooperman Lifetime Achievement Award . ”I’ve had such a great career,” says Erickson. “Why not go out on a high point? Now I can spend all the time I want here in my home- it’s never boring.”