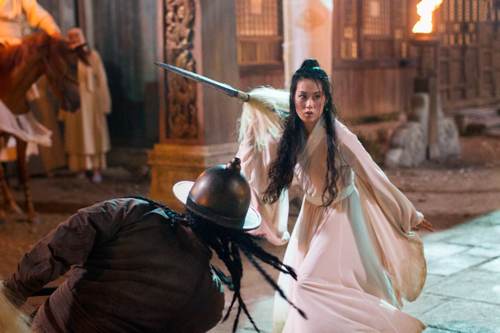 Wearing only a diaphanous silk robe, her provocative foreplay is conveyed through a graceful, mesmerizing dance; a spider spinning her web. Her prey – three leering soldiers, sent by her corrupt brother Chancellor Jia Sidao to attack her, are hypnotized by her sexual innuendo. And that’s when Mei Lin, favourite Imperial concubine, drops her robe and strikes. Throwing a large dagger disguised as a hairpin into the throat of one, she cartwheels into martial-arts mode, a whirling Dervish, spearing the second soldier, then, brandishing his sword, beheads the third.

“That’s what I love about playing Mei Lin,” laughs the charming, down-to-earth Vancouver actress, Olivia Cheng, who is one of the stars of Netflix’s $90 million dollar epic TV series, Marco Polo, written by John Fusco and produced by The Weinstein Company. It was recently renewed for a second season. “She’s such a great kick-ass character. She’s so fierce, so smart and tenacious and has so much inner strength. Her love for her daughter drives everything. That’s what drew me to the role in the first place, she confides.” 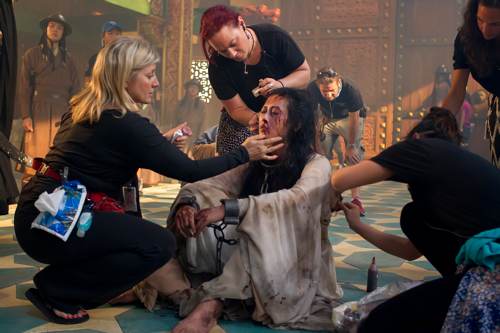 Cheng, 35, wielding only a fork to eat a salad at Homer St. Café and Bar, one of her favourite downtown Vancouver eateries, is articulate and spontaneous, skills garnered, no doubt from conducting interviews herself as a correspondent for ET Canada. Now that the proverbial shoe is on the other foot, she expounds on the grueling training at Pinewood Malaysia Studios, where the 13th century Chinese court of Kublai Kahn was re-created with lavish and authentic detail.

“Believe me, no amount of jogging along the seawall could prepare me for the intensity of our training!” she jokes. “We were all individually trained for two months by amazing stunt teams because all of us had to learn different fighting styles. On one hand it was like going to a really cool summer camp in an outdoor dojo because they had to acclimatize us to the incredible heat. Everything from strength conditioning, wushu marshal arts, high-wire work, sword training (we practiced with wood sticks, she grins,) tai chi, and then stunt choreography. And I’m really proud to say that I did all my own stunts! Then we started filming for six months, 10 hours a day. It was just crazy.” 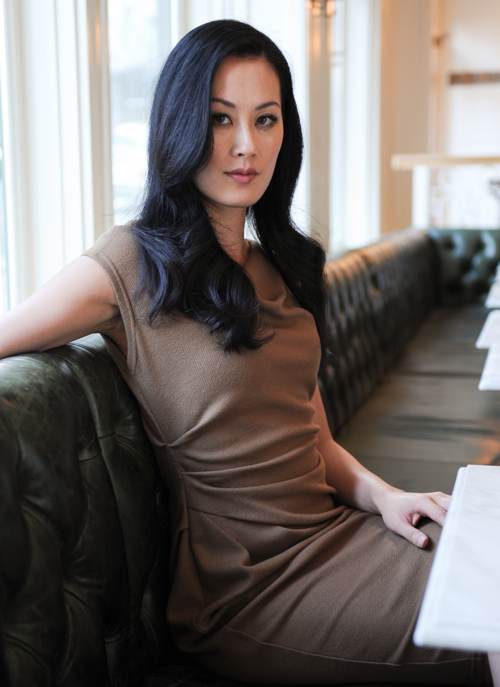 Born in Edmonton to Cantonese-speaking immigrants, Cheng’s natural spunk, curiosity and determination found a perfect outlet in acting classes and gymnastics at age six and later in commercials. Her parents encouraged her to pursue commerce at the University of Alberta but she just wasn’t happy there and switched to NAIT’s Radio and Television Arts. After graduating she went on to a successful media career as videographer then reporter at Global TV Lethbridge . “I was even considering becoming a war correspondent,” she admits. That’s when serendipity turned the tide and she was asked to open-audition for an AMC mini-series, starring and executive produced by veteran actor, Robert Duvall. Five young Chinese actresses were cast (ironically playing prostitutes sold into slavery in San Francisco.) Out of 100 auditioning, Duval cast her in Broken Trail and it went on to win four Primetime Emmy Awards. That really ignited the acting bug for Cheng and she moved to Vancouver, playing roles in USA’s Psych, Fox’s Fringe, CTV’s Flashpoint, The CW’s Arrow and Supernatural and CBC’s Arctic Air.

Marco Polo is set in 13th century China in the court of the Song Dynasty’s Kublai Kahn. Mei Lin is forced into spying as a double agent by her conniving brother, who holds Mei Lin’s young daughter hostage. A much deadlier precursor of the 19th century’s Mata Hari, Cheng’s character was actually based on a real but unheralded concubine who helped her ruthless brother rise to power. His incompetence led to the Dynasty’s downfall.

“I did a lot of research – I read about the history and the conflict between the dynasties, watched documentaries, read about the sex trade and I learned so much about my own culture. I certainly knew about the concubine in Chinese history – both celebrated like rock stars and reviled at the time. But to read about thousands of Chinese women who were shuffled into this systemized institution of prostitution and objectified, with no legal rights and were traded like chattel, used like bargaining chips in wars, was an eye-opener.”

“But let’s face it,” Cheng admits laughing, “Marco Polo is so intriguing because what holds it together are the really authentic relationships between family members – that’s as topical today as then –everyone has a dysfunctional family in some respects! ”

GETTING PERSONAL WITH OLIVIA CHENG

I READ THAT AS A KID, YOU WANTED TO BE A MARVEL COMICS SUPER HERO! THE CHARACTER OF MEI LIN SEEMS TO GET PRETTY CLOSE TO THAT WISH

Oh that’s so funny! Yes I loved the strength and magical powers of all those super heroes who were mostly guys. As Mei Lin I got to fly around using high wires for some of my martial arts scenes so that was pretty close. Actually, for one really big scene when I confront the Imperial Family, I swung my sword and shattered a camera by mistake. It will end up in the ‘blooper’ reel!

THERE WAS A LOT OF CONTROVERSY OVER THE AMOUNT OF NUDITY IN THE SERIES. HOW DID YOU OVERCOME THAT ESPECIALLY IN YOUR PIVITOL FIGHT SCENE?

Before I said yes to the role, I had a conversation with John Fusco (writer/creator) that I didn’t want to be exploited the way Mei Lin was as a character. Artistically and from reading about the period extensively, I understood that the nudity was to show the dehumanizing situations Mei Lin had to overcome. I was nervous at first but after a while the nudity became a sort of costume in itself.

WHAT DOES NETFLIX’S MARCO POLO EPIC MEAN TO YOU IN TERMS OF CASTING ASIANS IN GREAT ROLES?

The show really pushes boundaries because Hollywood has opened up the genre for English-speaking Asian actors to really dig their teeth into roles that are authentic and complex . So I say -hell yah! If I wasn’t in the show, I’d be counting down the days to watch it!

NOW THAT MARCO POLO HAS GOTTEN THE GREEN LIGHT TO RETURN FOR A 2ND SEASON, HOW ARE YOU SPENDING YOUR OFF-TIME IN VANCOUVER BEFORE FLYING OUT TO MALAYSIA AGAIN?

I’m enjoying finally being able to decorate my apartment downtown. I’m really into shabby chic- unique pieces that are stylish not pretentious.

WHAT DOES THAT LITTLE TATTOO MEAN ON YOUR ANKLE?

The character is the Mandarin character for beauty combined with my Chinese birth sign, the lamb. Hey, 2015 is my year! I got it done when I was 18 and I’m glad it’s so small so I have no regrets about it now.