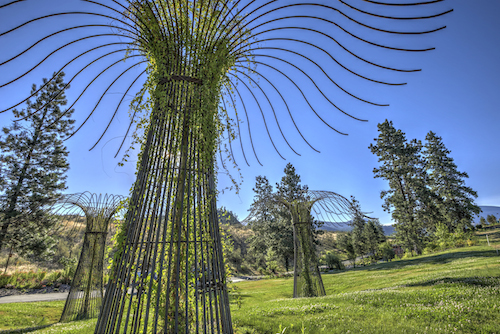 The old adage wine, women and song has been around since the 13th Century and translates from almost every language. While music and concert series are de rigeur at every winery throughout the Okanagan – from local talent serenading on the patio to Grammy Award winners like Tony Bennett performing at Mission Hill Winery’s Amphitheatre, public art, including sculpture, art exhibits, even film, is a growing trend among wineries to attract patrons.

‘Treat Your Senses’ is the tagline that couldn’t be more illustrative of the newly established Liquidity Winery in Okanagan Falls. “If you look at wine sensibility in Europe, it enhances all things artistic from horticulture, landscaping, food and art,” says Liquidity President and Proprietor, Ian MacDonald. A passionate art collector, he also designed the modern tasting facility built by Nick Hill of Ritchie Custom Homes.

Sculptural installations, paintings and photography abound throughout the 4,000 sq. ft. winery and grounds. They include Shattered Sphere and Sentinel by North Vancouver’s Brent Comber who creates tactile magic in wood ; Dandelion by Boise, Idaho sculptors, Mark Baltes and Ken McCall, is a delightful 15’ metal dandelion gone to seed positioned in the Chef’s garden. The tuft rotates in the wind like an alien botanical pinwheel. A special exhibition of select sculptural installations by iconic Canadian artist, Martha Varco Sturdy, meld naturally into the surrounding landscape. 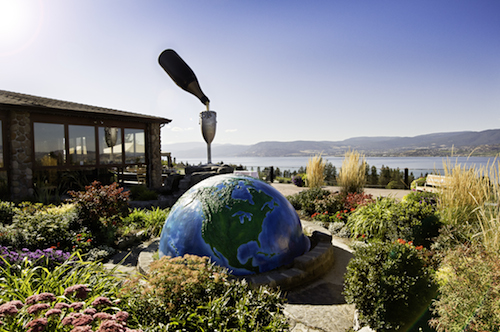 “I’ve been involved with Stephen (Stephen Cipes, Proprietor) Summerhill Pyramid Winery in Kelowna, hosting the Get To Know Writing & Art Contest for young people, since 2009. He released the Robert Bateman Get To Know Your Wild Neighbours for a series of organic wines and chose my paintings for their labels,” recalls internationally acclaimed wildlife artist and environmentalist, Robert Bateman from his Salt Spring Island studio.

“Stephen is very concerned about the environment and has one of the biggest hearts in the world, so when we had an opportunity to collaborate again recently on a new Robert Bateman Artist’s Series The Grasslands Collection of three limited edition premium organic reds, with $2.00 from each bottle going towards the new Nature Education Programme for Young People at the Robert Bateman Centre in Victoria, it was a win-win for all of us. Stephen chose three of my paintings based on prairie themes of creatures threatened in southern Alberta, for the signed labels.” The series includes a 2010 single vineyard Cabernet Franc, a 2010 Merlot and a 2012 Cabernet Sauvignon /Syrah blend.

It’s hard to miss the gigantic bottle pouring wine into a goblet seemingly suspended in mid-air over Lake Okanagan. “That’s the work of 82- year- old fibre-glass artist, Peter Soehn who has created these kinds of almost cartoon-like pieces all over British Columbia”, says Cipes. He also did our globe sculpture and worked on our Pyramid for the winery.” 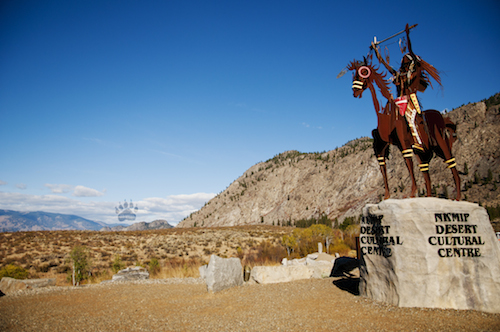 Nk’Mip Cellars (pronounced in-ka-meep) is Canada’s first aboriginal owned and operated winery and is located in Osooyos between The Nk’Mip Desert Cultural Centre and Spirit Ridge Vineyard Resort and Spa, in partnership with the Osooyos Indian Band and Vincorp International.

The Nk’Mip Desert Cultural Centre designed by architect Bruce Haden of Hotson, Bakker, Boniface Haddon, is a semi- underground sculptural structure and a spectacular example of rammed earth construction in which striated layers of earth and colourful mineral pigments are mixed with cement.

Chief Clarence Louie has commissioned several permanent sculptures by Colville artist Virgil ‘Smoker’ Marchand throughout the Centre, Winery and Resort; Chief on a Horse is the dramatic metal sculpture that dominates the rugged desert terrain silhouetted against the startling blue skies of Osoyoos. Marchand’s other installations include Water Sculpture and Spiritual Guardians all hand painted in vibrant colours that take on a weathered desert patina over time.

Brylcreem and saddle shoes were mandatory when the Naramata Bench Wineries Association hosted a sold-out Tailgate Party for 500 at Poplar Grove Winery in Penticton this month. In celebration of the 30th Anniversary of the iconic Canadian film, My American Cousin written and directed by Naramata native, Sandy Wilson, the film was actually shown on a big screen in the vineyard as revelers dressed in ‘50s outfits sampled wine from the 24-member wineries and Naramata chefs. “Many of the guests were actually extras in the film set in the ‘50s, when it was shot in Naramata in 1985!” enthused Wineries Association Marketing Director, Tina Baird. “They got to rub shoulders with Sandy who still lives in Naramata and with Margaret Landrick one of the young stars of the film.”

In 1985 the film won 6 Genie awards including best film, screenplay, director, Sandy Wilson, actress Margaret Landrick and actor John Wildman. Landrick , all grown up, is the former Entertainment Editor of the Vancouver Sun!

“Anthony’s (Proprietor, Anthony von Mandl,) European education, travels and reputation as an art collector and patron of all the arts, began many years ago. Our extraordinary setting at the winery in Kelowna with incredible architecture, grounds and breathtaking views, makes it so conducive to showcase these magnificent sculptures. Steinunn travelled here before the exhibition to confer with Anthony in selecting each outdoor space to make sure that the figures would really resonate with the public,” explains Grady. “Eight have already been sold to private collectors.”

“Let’s put it this way, “ says Grady, “wine paired with food and art give a return on the good life- not necessarily monetary. But if people are happy, they want to linger longer and then they are going to open their wallets and buy wine!”

All exhibitions continue throughout the 2014 Okanagan Fall Wine Festival.