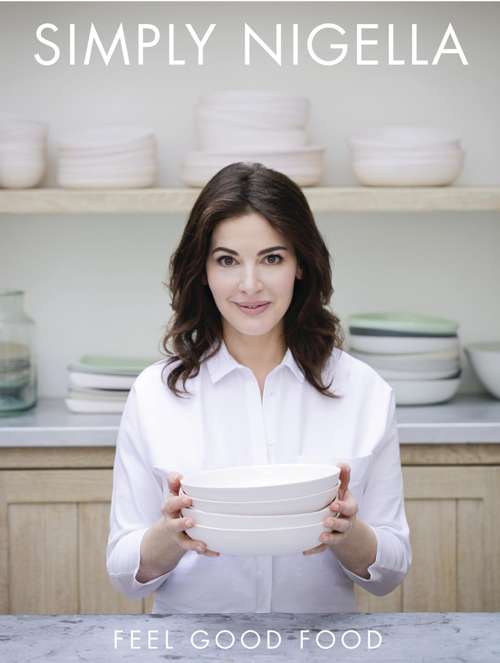 Yes, she’s gorgeous in person. And, yes, she oozes sensuality even in a red plaid lumberjack shirt over black leggings. Now that we’ve gotten appearance out of the way, Simply Nigella, Lawson’s 10th cookbook and also her new eponymous BBC television cooking show, are the “Eat, Pray, Love” of pleasurable eating. (But without having to pray that your food turns out okay or if Javier is there at the end of the evening, but I digress…)

Having just flown into Vancouver from Los Angeles on a whirlwind North American publicity tour ; then back home to London, resuming the tour down under in Australia and New Zealand in 2016, the “Domestic Goddess” is on a roll.

“I have no training as a cook,” admits the Food Network star bluntly, sans any entourage in the lobby of the Rosewood Hotel, “and I never pretend I’m a chef. “I cook for family and friends and I chop like a normal person- in fact I’m rather klutzy. I just swallow my pride and it doesn’t make a bit of difference in the end, as long as it tastes good. I love big bowls – I find them soothing. I could eat everything out of a bowl, ” she laughs. 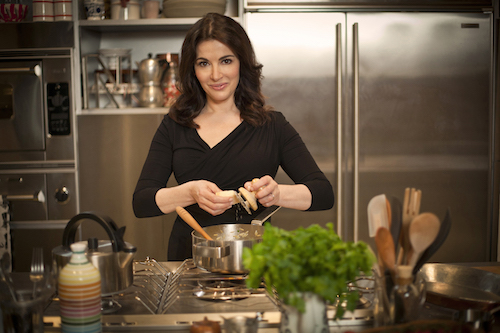 And it’s this down-to-earth demeanor; her readiness to divulge – that yes, she, like we mere mortals, “ can devour her Chocolate Guinness cake in one sitting,” and that “cooking great food should be without the stress,” that endears Lawson to foodies all over the world.

In the Introduction to her cookbook, Simply Nigella, she confides that “for me, cooking stems from an engagement with life, which in itself combines hopefulness with playfulness.” While the freshest ingredients are very important to her, it’s the physical ritual of “chopping, stirring, tasting, losing myself in the world of flavor and sensation,” that connects her with herself and others.

Lawson, 55 wasn’t always interested in cooking and her subsequent sultry reputation as TV queen of the double entendre, belies incredible resiliency and an erudite, and always curious mind.  She earned a degree in Medieval and Modern Languages at Oxford and worked as deputy literary editor for The London Times. Her culinary career was sparked when she became the restaurant critic at The Spectator Magazine in 1985 followed by food critic for a column at the New York Times and British Vogue. 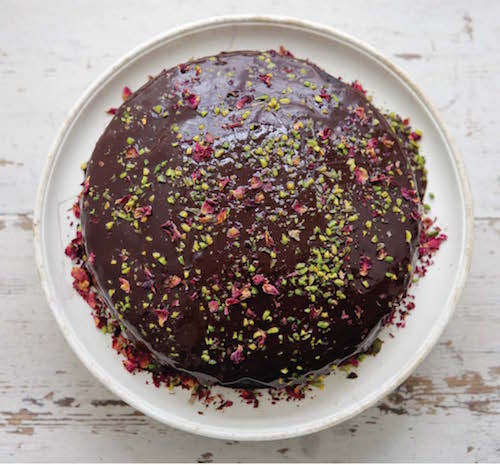 She comes from a fascinating Jewish family, with food connections on both sides. Her father, Nigel Lawson a journalist, became British Prime Minister Margaret Thatcher’s Chancellor of the Exchequer, while her late mother, Vanessa Salmon, was an heiress to the J. Lyons & Co. Corner Houses Restaurants, Teashops and catering dynasty. Ironically, future labour Prime Minister Margaret Thatcher worked at Lyons in the 40s as a chemist in the ice cream and pies department!

Lawson’s grandfather Felix Salmon, was a member of the catering corps’ famine relief during WWII and from research Nigella undertook at the Imperial War Museum, may have been attached to one of the regiments that liberated the German concentration camp, Bergen-Belsen. 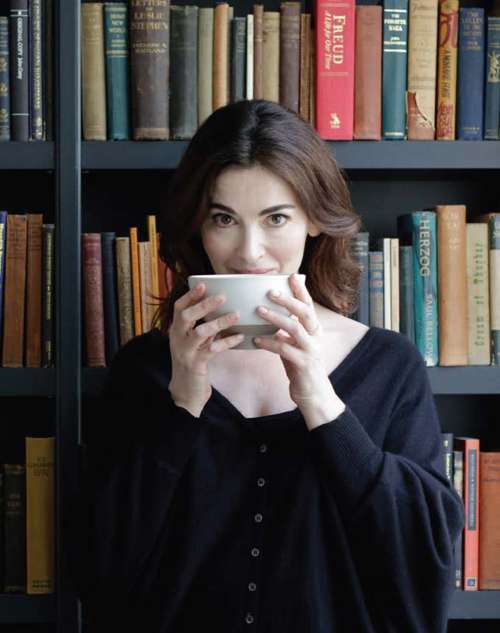 But don’t think that a privileged past gave Lawson immunity to life’s trials and tribulations – on the contrary. Her life has always been experienced from a gilded cage. Lawson’s mother, Vanessa died of liver cancer at age 48 and Nigella’s sister, Thomasina was only in her 30’s when she succumbed to breast cancer in 1993. Married to fellow journalist, John Diamond, they have two children Cosima, 23 and Bruno, 20. Diamond passed away from throat cancer at age 47 and Lawson plunged herself into the filming of her first BBC-TV cooking show, Nigella Bites.

She crossed the pond in 2013, joining judges and chefs Anthony Bourdain, Ludo Lefebvre and Marcus Samuelsson on the cooking-themed reality show, The Taste, which ran for three seasons on ABC-TV until 2015. The venue served to perpetuate her popularity as a global brand.

At a jam-packed demo and signing at Barbara-Jo’s Books To Cooks in Vancouver, the mostly female audience is hanging on Lawson’s every word as she competes with the noise of the pulsating food processor making Sweet Potato and Chickpea Dip.

Whether she is alluding to her past bitter and very public divorce to her second husband, advertising magnate, Charles Saatchi in 2013 or just the state of the world in general, she quips in her charming, self-deprecating style: “ I adore bitterness but we all taste things differently. And by the way, the only place for bitterness is in the kitchen. It’s a miracle that we can all sit down together and eat! ”

Simply Nigella is published by Appetite by Random House