FROM HER ART STUDENT BEGINNINGS AS A PAINTER & SCULPTOR TO CREATOR OF ICONIC JEWELRY AND HOME FURNISHINGS, MARTHA VARCOE STURDY COMES FULL CIRCLE 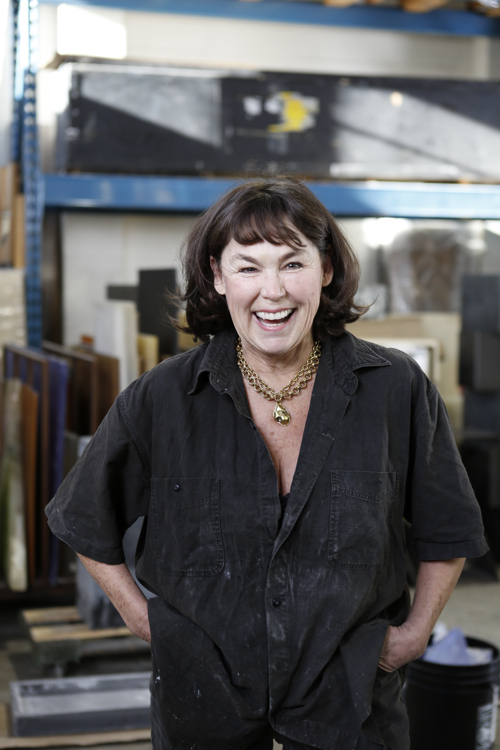 “Are you ready? ” she bellows at the photographer – not only from impatience but because the heavy 75-lb slab of electric blue resin she’s brandishing is about to receive a smackdown of epic proportions. As it hits her downtown Vancouver studio’s cement floor shattering into hundreds of ice-like shards – fodder for future canvases- the 71-year-old pumps her muscular bicep like the victor over the vanquished.

“This is the real me,” emphasizes Sturdy, by which she means no Botox, no plastic surgery. Always in head to toe black, she rhapsodizes about the comfort of wearing clothes by avant-garde Belgian fashion designer, Ann Demeulemeester, then quickly changes into a re-cycled paint-spattered shirt. Around her neck, a large gold nugget pendant, given to her by her husband David Wardle, hangs from a hammered chain-link necklace Sturdy designed. Heavy biker boots complete the look. A devotee of yoga, Sturdy usually works bending over the ground to accommodate her large canvases like Jackson Pollock and is in fantastic shape. “It’s a great workout and I do limp a bit- this work is hard on the hips- but who cares!” she laughs. But perhaps “the real me” symbolically refers to her new career and freedom at a time of her life when she has granted herself permission to explore her fine art roots again. It wasn’t always so.

Born and raised in Vancouver, Martha Varcoe was a single mother, mature graduate (at 35) of Emily Carr University of Art & Design; a sculptor and painter of large canvases. But she quickly realized that to support three children she would have to put her heart’s desire on hold. It was at this juncture that she discovered the magical properties of resin: resilient, translucent with infinite colour variations. A life-long love affair with the medium ensued and would not only catapult her chunky jewelry and sensuous vessels into a multi-million dollar business in the ‘80s and ‘90s but evolve with her into her current new direction. Large three-dimensional mixed media resin paintings on steel that she calls her “wall sculptures.”

“ If I could walk away from the business I would,” Sturdy bluntly confesses, so determined is she to pursue the next chapter in her life unencumbered by the past. “But I have staff that have been with me for over 30 years and I just can’t do that. I have a solid team in place now to concentrate on the business part so I can be free to make art. I’ve had a lot of stress managing the company and the farm but I’ve got tremendous energy going forward because I’m happy.” 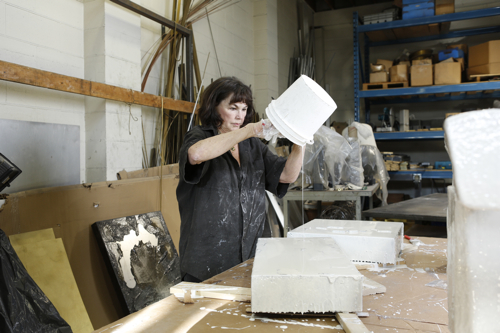 The farm, amongst several properties Sturdy owns, is a rustic, 250 -acre former ranch in Pemberton about two hours north of Vancouver. It’s where, when she’s not driving the tractor, vegetable gardening, tending to indigenous plants surrounding the pond she dug out from a dried -up bog or cooking for family, Sturdy creates most of her paintings and sculptures. Her studio is in a renovated barn. She’s creating a wood and metal sculpture park that’s an ongoing work in progress. It’s also an inspiring sanctuary through which she snowshoes and rides her horses, Porter and London.

“I used to race around like a maniac but now I’ve slowed down and when I ride into the bush and look down at their hoof-prints in the snow or the ice cracking on the pond I take nature’s microcosm and transpose it into my paintings,” explains Sturdy. “My Break-up series is my bird’s eye view of the environment around me.”

Sturdy joined the Winsor Gallery of contemporary art last year with some pieces from Break-up that also travelled to The Toronto International Art Fair. Owner and curator Jennifer Winsor remembers first meeting Sturdy. “We were at an opening and I saw Martha talking with people, lifting her arms and gesturing wildly. Under her arm was the price tag hanging down! I didn’t want her to feel embarrassed so I went over and quietly explained. She just ripped it right off and kept talking- never missed a beat. The woman is fearless in everything she does.”

With her almost Zen-like connection to the Canadian landscape, it’s not surprising that Sturdy is also drawn to Japan for inspiration. “Whenever I’m there, I look at all the leaves, their incredible gardens and teahouses – things that the average person wouldn’t notice or takes for granted.
The Japanese also agree with my point of view of living in the moment.” 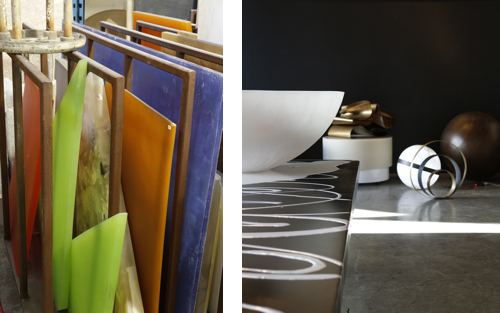 In 2011 she debuted her sculptural series, Reflections, in Tokyo during Tokyo Design Week, Bamboo Expo and at the Orie Gallery. Towering pillars of salvaged cedar that Sturdy split, charred and sanded to a velvety smoothness and mounted in steel bases, resemble a petrified forest and invites tactile interaction.

Martha Varcoe Sturdy is a force of nature she has so gently tamed in her new solo exhibition Breaking , opening at The Winsor Gallery May 8th
through June 8th. “I just keep re-inventing myself, that’s why I’m never bored.”

THE PERSONAL SIDE: Q & A – MARTHA VARCOE STURDY

Why have you started using your maiden name Varcoe again?
People don’t want me to change – but I need to evolve. When I made the decision to focus completely on my fine art, I decided to use my own name again. I’ve come full circle. It distinguishes me from the business- don’t call me a designer anymore.

You must have been quite an inspirational but daunting role model for your children growing up:
When my kids were growing up and they’d say to me ‘that’s not fair’ about something, I’d say ‘you’re right -life isn’t fair, so you have to learn to deal with it.’ I worked so many jobs as a single mother and they realized early the importance of hard work. Between David and I we have 6 grown children and 10 grandchildren. I’m really proud of my kids and they’ve all done their own thing. My oldest son Jordon, 50, is the Mayor of Pemberton. My middle kid, Caleb is in trucking and my daughter Jessica used to live in Paris but now she lives in Nairobi with her husband and my granddaughters. David is happy that I’m doing what I want.

How does travel influence your creativity?
I love travelling and have been almost everywhere from the Far East all through Southeast Asia. I was just in Japan again recently and my daughter and I went to the famous Tsukiji fish market in Tokyo at 4:00 a.m. It was amazing! I love the Japanese aesthetic of minimal and functional and their attention to the smallest details. I always take photos of things no one else would notice. I learn something new every time and it eventually translates into my work.