BY LAURA GOLDSTEIN
Special to the Globe and Mail 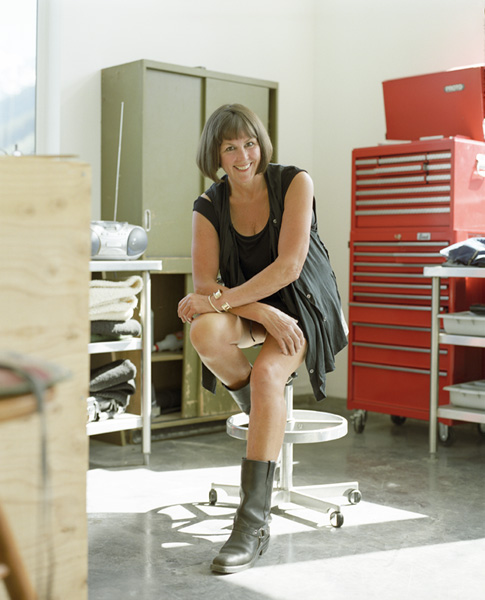 Martha Sturdy is wearing black bicycle shorts “for speed and comfort.” Darting across the room – taunt, tanned, StairMaster legs are planted solidly into cowboy boots that could just as easily be inline skates. All the while, she is sewing Oriental tassels onto a chic shawl to be worn later to back to back receptions launching her new home accessories line at Ginger Eisen’s Bathrooms and Urban Mode in Toronto.

At 52, the Vancouver-based jewelry and home furnishings designer has raised the humble plastics medium to international status. With eighteen employees in her studio, a second Vancouver store newly opened and company sales grossing between one and two million, (up 15% from last year), her housewares division has grown to over 50% of the company’s business in just five years. Sturdy’s designs are sold world-wide in over eighteen Museum shops in North America including Toronto’s AGO; the Museum of Modern Art ; through Bloomingdale’s catalogue; Barney’s and Saks Fifth Avenue in New York and to boutiques across Canada, England, Switzerland, Hong Kong and Japan. Having received the approval of the world’s top fashion magazines that have featured her pieces on their pages and covers of U.S., British and Italian Vogue, Elle and Harper’s Bazaar, Sturdy still remains refreshingly blunt and self-deprecatingly down to earth about her success: “You know, it’s not that I have more talent than anybody else, lots of people have talent. I just have more tenacity.”

The hotel room is strewn with samples of “my junk”: sensuous matte vanilla bowls and crunched candlesticks immodestly but unapologetically expose every bump and imperfection to the touch, will be used in a photo shoot later in the day; irregular strands of chunky, toffee and licorice resin necklaces that she wears long and akimbo, are spread on tables like discarded mahjong pieces.

“If you have a white bathroom, as many people do, ”says Sturdy, it’s nice to have a splash of colour.”

At Ginger Eisen’s boutique, Sturdy’s stunning collection of cast acrylic resin bathroom accessories in Turquoise, Cobalt, Sage, Honey Mustard, Vanilla, Periwinkle, Smoke and Tortoise Shell, are displayed like crystallized sculpted confections. And, as children in a candy store, your first impulse is to pick one up. Upon doing so, the veins of marbelized colour in each hand -polished piece intensify as the light source changes. Individually sculpted and assembled, no two pieces are the same.

“Everything I design must be multi-functional, but,” confesses Sturdy, “it also has to be beautiful.” Impassioned by colour, its intensity, like her creative energy, seems to infuse her designs by osmosis. “These things are part of my soul,” Sturdy confides.

Unadorned towel bars, ($165.), over-size soap dishes (from $40.), a nest of vanity trays ($325.) divided into compartments that can be used for cosmetics, jewelry, or hair accessories and multi-sized bowls (from $30.), take on a swirling inner life. Akin to weathered beach glass, many pieces are accented with delicate tangled bronze or gold-plated ivy; leaves and ribbons appear to creep along the edges of Sturdy’s pieces. An exquisite vanilla candy bowl set amidst four intertwined bronze stems and leaves ($130.), can also be used as a vase or to hold a candle. A periwinkle wastepaper basket, bordered with wide bronze ribbon attached as if casually tossed along the container, ($140.) could also make an unusual plant cachepot.

“I’ve been a big fan of Martha’s ever since she began her home furnishings line half a dozen years ago,” enthuses Eisen. “Her pieces are particularly popular for men’s bathrooms, especially the Tortoise Shell because the lines are clean and simple and men like the bronze accents.”

Her wool throw blankets ($195) in assorted natural, camel and black tweeds and herringbones accented by her trademark tassel and Chinese coin, while not exactly the usual bathroom accessory, add a comfort factor to the entire line and have been successful in boutiques in the U.S. where 100% wool is a rarity. 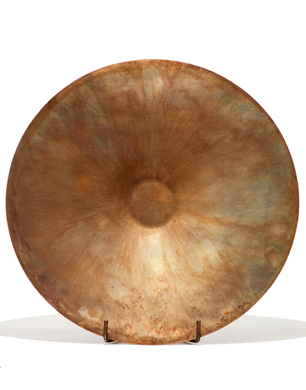 Myrlene Sundberg, the owner of Urban Mode on Queen Street West has just returned from a vacation in Bali and her imagination runs wild with ideas on how to use some of the 125 Sturdy accessory pieces available at her store. Pointing to an enormous acid-dipped brass bowl adorned with twisting brass leaves ($270.) she says “I can’t imagine anything more fabulous than filling it with water and floating candles and a hibiscus flower inside. In Bali they make small things precious and Westerners usually overdo things. Martha’s pieces are so important because they are simple and yet beautiful.” Bronze picture frames ($80.- $100.) have irregular borders, as if flames had been allowed to singe the edges; salad servers in Sage ($90.), are shaped like sensual paddles; while a 28” by 7 l/2” rectangular black and white marbelized resin platter ($140.) would make a spectacular serving piece for a whole salmon.

Sturdy predicts a return to simplicity in all things and likes to live both personally and professionally by the credo that less is more. “I went to fishing camp for some relaxation time – winding down is so important these days and I didn’t wear any jewelry, none at all , not even my rings. I noticed two other women who were pretty decked out with jewelry especially elaborate earrings and I thought, hmmmm. Too much. It’s time to streamline and pare it down to nothing both personally and what you buy for your home. The self-indulgence of the ‘80s was enough already! And that’s what I’ve had in mind when designing this new collection.”

“Of course, as soon as you do that, ”she laughs uproariously, “guess what happens? Vogue called me to do big jewelry for a shoot ( they never commission) and lots of it again because they think it’s going to be very important next year. Nothing always means something in this business!”

In typical Gemini fashion, Sturdy has two secluded aeries in Vancouver; one perched on the ocean and the second and most beloved, a farmhouse in Pemberton near Whistler, built on 200 acres that looks up 7,000 feet to Mt. Currie and renovated very slowly by she and her second husband, David.

“I’ve filled it with Oriental furniture because I think that the Chinese have resolved a lot of design problems. Except for comfort”, she laughs, “but I just put the bleached cotton cushions I designed all over everything and it’s very striking w ith my black wooden opium and concubine beds. I have a large bathroom with floor to ceiling windows, with white sconces I designed . The whole room is white-tiled, very minimal. I have my huge bowls that contain pumice and sea sponges and my small mirrors with the brass ribbon tossed along the edges. Very free-form and clean. And, I don’t have a tub. I have a large shower. I just don’t have time for a bath – it’s not me!”

Although metal and resins have consumed Sturdy since her art school days as a 32-year-old sculptor and mother of three making jewelry to pay for daycare, now, some 20 years later, her work is taking on an entirely new direction.

“For next season I’m going to be concentrating on designing furniture out of light wood and resin. It will have an Oriental flavour to it- very linear but with unusual colourings. I think that wood is going to become a precious commodity in the future and adding neon colours for a modern look or black and white marbling effects it becomes extremely sophisticated. I’m quite excited about it.”

Working the floor at the New York gift show (“well how else do you find out what the customer wants if you’re not prepared to be there?”’), Sturdy was commissioned to create two christening bowls for a very old Catholic church. “I made them for Easter,” she says and I designed a huge vanilla bowl sitting in a metal bowl on a light wood stand. Lit from beneath, the focus is on the baby’s head and the bowl and the effect was breathtaking.”

Introduced by Vogue Magazine’s Fashion Director, Candy Pratts Price, (Sturdy has had her pieces credited in the magazine about 50 times), she has been asked to create a line of jewelry for clothing designer Marc Jacobs but in that indomitable Sturdy style she’s going to do it her way. “I have to talk to him about these bracelets he wants. Just look at his design, ”she groans, thrusting a fax in front of me. “I bet he could buy these in Taiwan,” she laughs wildly,“ why get me to do it?”

A relentless crusader for several charities, she and buddy Vicki Gabereau have raised over $50,000 for the Central City Mission in Vancouver. Another $27,000 has gone to AIDS research for women from the non-profit sales of Sturdy’s AIDS ribbon pins.

She also gives incentive lectures at the “Y”.

“You know,” she chuckles, “I have a very balanced life. Two husbands, three children, two homes and three horses! Women have a responsibility to give back to other women that they can be anything they set their minds to. You’ve got to fill your world because life is short and the pleasure and joy you get from being supportive of others is immeasurable.”