Mario Andretti : A fascinating, ingenuous and often poignant story about love of motor racing and family

BY LAURA GOLDSTEIN
EXCLUSIVE TO THE TORONTO STAR 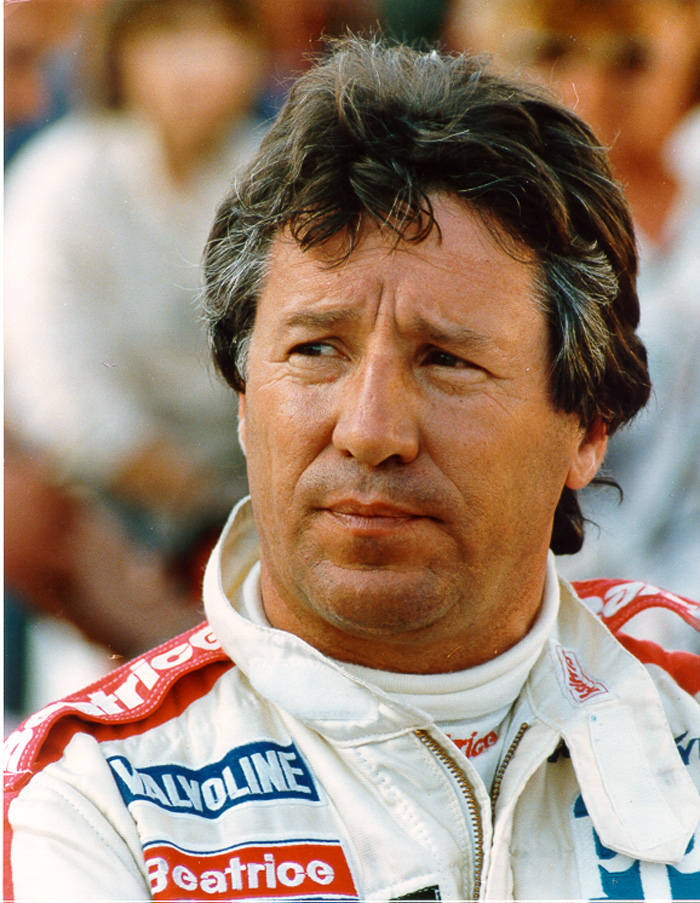 “Everyone knows the legend that is Mario Andretti. It’s in the record books. It’s audible in the applause at Drivers Introductions. Louder and more boisterous for Mario than anyone. It’s on a handmade t-shirt at Indy: ‘Everyone sucks except Mario.’ On a sheet draped over a camper at Michigan: ‘Blessed are the Marios for they shall inherit the Earth.’ It is not necessarily known that, next to family, friends,the Church and the combustion engine, Mario Andretti is devoted to his pig, Martini.” Paul Newman, in his forward to Andretti, edited by Mark Vancil

I wanted to know more about this god, Andretti and, okay, I admit it, the pet pig. But not just the sports statistics that erupted from the internet like a mechanical Mt. Vesuvius spewing out career highlights that threatened to bury me in his accolades: first driver to win Indy Car races in four consecutive decades; at Michigan in 1993, Andretti sets the world closed course speed record by going 234.27 miles an hour, a mark that still stands; 1994 competes in his 31st and final Indy Car championship season, touted as the “Arrivederci Mario” tour (in which all the teams would wear shirts emblazoned with his name during his final race at Laguna Seca, California)

It was the author, Andretti, I had come to interview on a steamy July day during the Toronto Molson Indy. His new book, Andretti, edited by Mark Vancil, with over 160 stunning photographs, many archival including 70 by famed photographer Walter Iooss Jr. published by Collins Publishers, San Francisco, is not a kiss and tell – that’s not Mario’s style. It is however, a fascinating, ingenuous and often poignant story about love – of motor racing and family.

Waiting outside the Newman-Haas trailer (an enormous computerized star-ship Mario, deftly outfitted with high-tech programs and the experts to decipher them), throngs of women of every age gathered. Racing mementos and programs clutched in their hands, (one middle-aged breathless woman hanging over a barricade tried to bribe me to deliver a photograph! ) as their idol graciously signed autographs on his customary walkabout after the race.

“I first became interested in motor racing when I was 11 or 12,” says the diminutive Andretti 54, whose charisma does not belie his salt of the earth character. It was the biggest sport in Italy in the ‘50’s and my twin brother Aldo and I used to go to the movies. I remember seeing Clark Gable, a race car driver in To Please A Lady. He was really debonair. The funny thing was, the title of the movie in Italy was not the right translation. It was simply called Indianapolis!”

The Andretti story is really the embodiment of the American Dream – from a post-war refugee camp in Italy to Nazareth, Pennsylvania; gas station jobs with Aldo (who later retired from racing after a series of near fatal accidents) , to earn enough money to buy an old car, rebuilt into a racer without their father’s knowledge and learning the ropes that would later attract better cars and bigger sponsorship.

The thread that seems to indelibly bind life and career together is Andretti’s eternal optimism and the importance that he places on the role of the family.

“My wife, Dee Anne is a very private person and she’s been so supportive about what we’ve given up but those are the sacrifices that you have to make,” relates Andretti as candidly and without hesitation in person, as he does in his book. “Obviously, if you have someone that’s nagging, it’s going to disrupt everything and kill your concentration. And you’re going to feel guilty. It’s like having this huge bowl of ice cream and being told not to touch it. But if you say ‘have as much as you like’ it’s human nature to moderate yourself. She’s given me this peace of mind otherwise, I would have rebelled. “I do think,” he confides of the woman he’s been married to for 34 years, “that in many ways it has been very lonely for her. But I’ve tried to share all of my rewards with her and the kids.”

A devoted family man, Andretti would not think twice about flying back from international circuits in the ‘70’s and ‘80’s as far away as Brazil to visit for only 72 hours and then fly to a race in South Africa. “I’ve always done that, he says, “otherwise I wouldn’t see Dee Ann and the kids for months. Perhaps I’ve been criticized for being away a lot by so-called experts, but you have to do what’s comfortable for yourself because that’s what lets you operate at your peak. I’ve been very fortunate that at least I saw my sons (Michael and Jeff) on weekends – even if I was racing against them!”

Andretti concedes that it’s been difficult for his wife to watch all three race because of the danger. “I don’t envy her. And honestly, I’m not a good spectator. In fact, it wasn’t until my kids started racing that I realized the emotions she was experiencing. But we just have to except it. Everything worthwhile has a price attached to it.”

Although lady luck does not rule Andretti’s life as other athletes are obsessed by superstitions, the word “lucky” often peppers the conversation: “July 13th, 1969 was one of the luckiest days of my life,” he tells me, a huge grin on his ruggedly-lined face. “I had just won the Indy 500, Dee Ann went into labour (after the race!); we had a girl, Barbie, and when I put a dime in the pay phone at the hospital to call her mother, 75 cents came out!”

“You know” he says as if to dispel any myth of the perfect family, “it hasn’t always been a bed of roses. Although I’ve been lucky not to have suffered major injuries, I feel very sad about my brother Aldo, although he is a very good businessman and has a lot of pride in his son, John who also races. My son Jeff has paid a tremendous price with his injuries. I think that sometimes people think that the Andretti name means you were born with a silver spoon in your mouth. It’s very tough for the kids to get their due credit but they’ve survived.”

How will Mario Andretti handle retirement? “There’s no question I had a fear of staying too long. But I have to resign myself to it. I’ll still be involved with racing in some way.”

Asked if he’s ever been approached about making a movie about his life, Andretti laughs and says “Yeah, there’s been talk about Ernest Borgnine playing my father. I’d like that. He’d be perfect. And to play me? – the Fonze probably!”

“And the pig?” I ask, unable to contain my curiosity.

“Oh Barbie gave me Martini. My wife would give him away in a minute. I mean he’s not too handy and he’s not the easiest animal to have around. He’s not good with kids or Barbie. They don’t get along. So, I guess you could say he’s not a “people pig.” But you know, when we are alone together, just Martini and myself, we get along fine!”