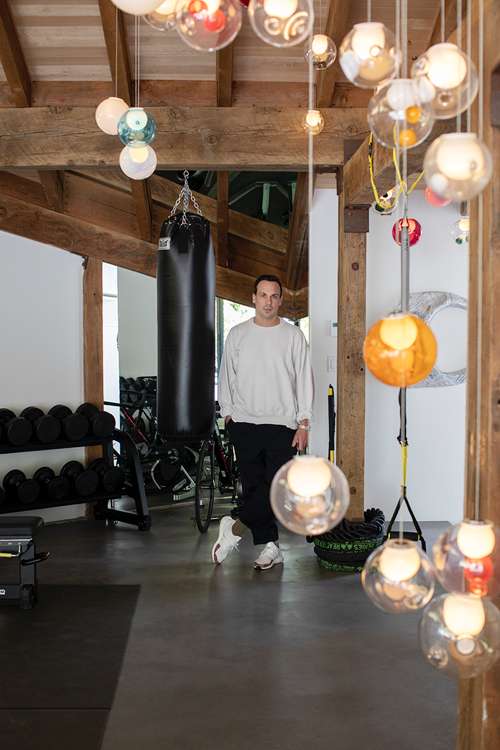 Like Alice falling down the rabbit- hole or in this case, navigating an endlessly curvaceous road down through dense forests, one becomes “curiouser and curiouser” about Lyndon Cormack’s Woodlands hideaway in North Vancouver.

Once found, the property of the Herschel Supply Company’s co-founder that overlooks the ocean at Indian Arm, is as playful and laid-back as the owner himself. These aren’t ostentatious digs flaunting the company’s international success as purveyors of hipster retro backpacks, clothing and accessories. Instead, the 6,000-square-foot home on multiple levels is a relaxing retreat filled with imaginative and colourful works of art juxtaposed beside his kids’ drawings. Every room stimulates conversation. The conviviality of friends, including brother Jaimie, just a few minutes away in Deep Cove, dropping in by boat for homemade pizza from the patio’s pizza oven or playing tunes on the grand piano in the living room, belies Cormack’s astute eye for details.

“I’ve lived in this area for over 20 years and when this house came on the market a few years ago, it was so intriguing I had to figure out how to buy it,” Cormack laughs. 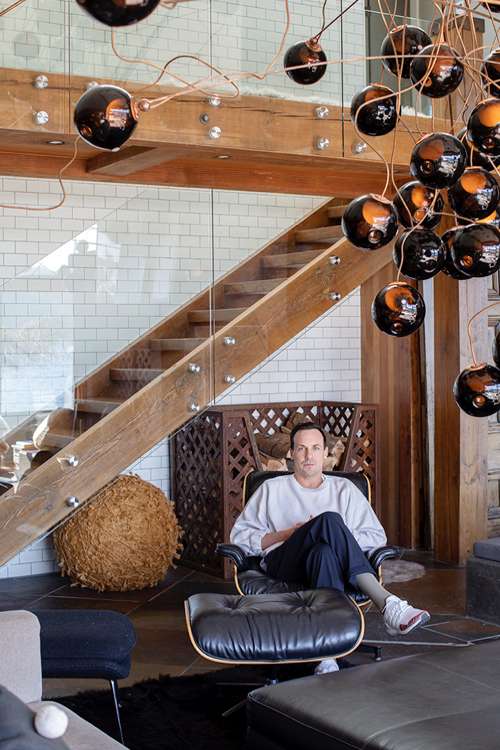 By “intriguing” he means that the home, previously owned by artist, jewelry designer and sculptor, Susan Macdonald, had many fascinating custom embellishments and built-ins that meshed with Cormack’s delight in eclectic design. It was also a natural springboard for his personal vision when it came time to renovate. He kept the original wooden and iron jailhouse entrance doors scavenged by Macdonald, complete with peepholes and its sliding window through which prisoners received meals; her vintage canoe hangs upside down from the kitchen ceiling with paddles fitted with potlights and at a touch of a button, an electric garage door Macdonald had installed in the living room, opens to cooling breezes, multileveled patios and spectacular views of the Inlet beyond.

“I spend so much time in the world’s best cities including Vancouver where our office and store is downtown, so it’s so nice to escape here,” says Cormack.

The contemporary, light-filled home is a mix of rustic Douglas fir beams contrasted against white subway-tiled walls, original fireplaces in copper and grey striated slate and buffalo hide area rugs. Relaxing in the living room surrounded by stacks of coffee table tomes and shelter magazines (Australia’s contemporary design magazine, Artichoke is a personal favourite,) Cormack admits, “I didn’t hire an interior designer for this house, and maybe I should have,” laughing in his self-deprecating way. “But you know, this is a shoes-on, kids -live -here house,” he affirms. “There’s no room that kids can’t play in or are off limits.”

Delicate colourful textile and wire jellyfish he found in the Marais district of Paris are hanging in the window of a cozy nook, adjacent to the built -in bar. Their dangling tentacles are mimicked by the gigantic creature-like lighting fixture by Bocci, suspended from the 20-foot ceiling that dominates the open concept living room. “Omer (Arbel) and I have been friends for years,” says Cormack of the Vancouver lighting designer “and I think he’s a genius. He designed our Herschel store in Gastown too. I have 369 of his hand-blown 28 pendants, all over the house and even out on the dock,” he enthuses.

“I’ve always loved unusual things, doing a lot of my shopping online,” he admits. “But I do make a point of wherever I travel for meetings whether in Dubai or Berlin or to New York, to get out and walk to interesting stores and antique markets.”

Cormack is more interested in the “story” around objects he has in his home rather than putting a monetary value on whether their worth will appreciate in the future. “There’s a lot of things in this house that have no value – for example. I have a twine ball from a 19th Century factory in New York that I bought from a gallery. It’s not a collectable – I just found it interesting. Yes, I do have a Warhol but I can’t imagine ever selling it. Don’t you buy things to have them forever?”

Cormack leads the way to his kitchen where all eyes are immediately riveted to the ceiling and not only on the canoe: Five fantastical fabric sculptures by fibre artist, Joel S. Allen, dangle from fishhooks mounted twenty-feet in the air. “I found him online, says Cormack and he insisted upon delivering the sculptures personally in a U-Haul all the way from Steamboat Springs Colorado,” he adds. “I’m not a very good cook,” he confides but I do make great pizza in the outdoor pizza oven. It’s pretty casual here all year round.”

Following the lead of cartoonish KAWS figures perched on the stairs into the library, the airy space is dotted with large sculptures and comfortable pastel Patricia Urquiola sofa and chairs. Cormack re-invented a former mud room turned reading room adding accordion doors that open onto a path to the nearby sauna, hot tub and outdoor shower. But the pièce de résistance and admittedly, Cormack’s only fashion weakness, are hidden behind wall – to – wall built-ins: 1,000 pairs of running shoes that would even make Imelda Marcos gasp!

A running and water sports enthusiast, Cormack, who likes to work out every day, turned a double garage into a 650-square-foot mirrored home gym lit with artistic flair by colourful Bocci pendants.

The glass and Douglas fir staircase leads up from the living room to a catwalk overlooking the first floor giving one pause to admire sparkling ocean vistas, a gigantic garden chess board and pottery shack. A nearby mini putting green is a hit for golfers of every age.

Cormack’s master bedroom is all about the views; wall-to-wall accordion doors open onto a balcony overlooking the ocean and hundreds of rhododendron bushes and cherry trees are ablaze with colour in the spring and summer.

Girls just want to have fun and his daughters, Isla and Olive’s bedrooms look very sophisticated and uncluttered at first glance with kids-size Saarinen chairs and abstract portraits by photographer, Stephen Wilde. However, climbing up a ladder through the hole in the wall of one bedroom, takes the girls and their friends into a large secret playroom filled with costumes, toys, books and well, girls’ stuff, Dad.

“You know, I’ve told my kids, when you grow up, go out and explore the world or live somewhere else if you want to,” says Cormack,” but I never want to sell this house. I want to keep it in the family for generations.” 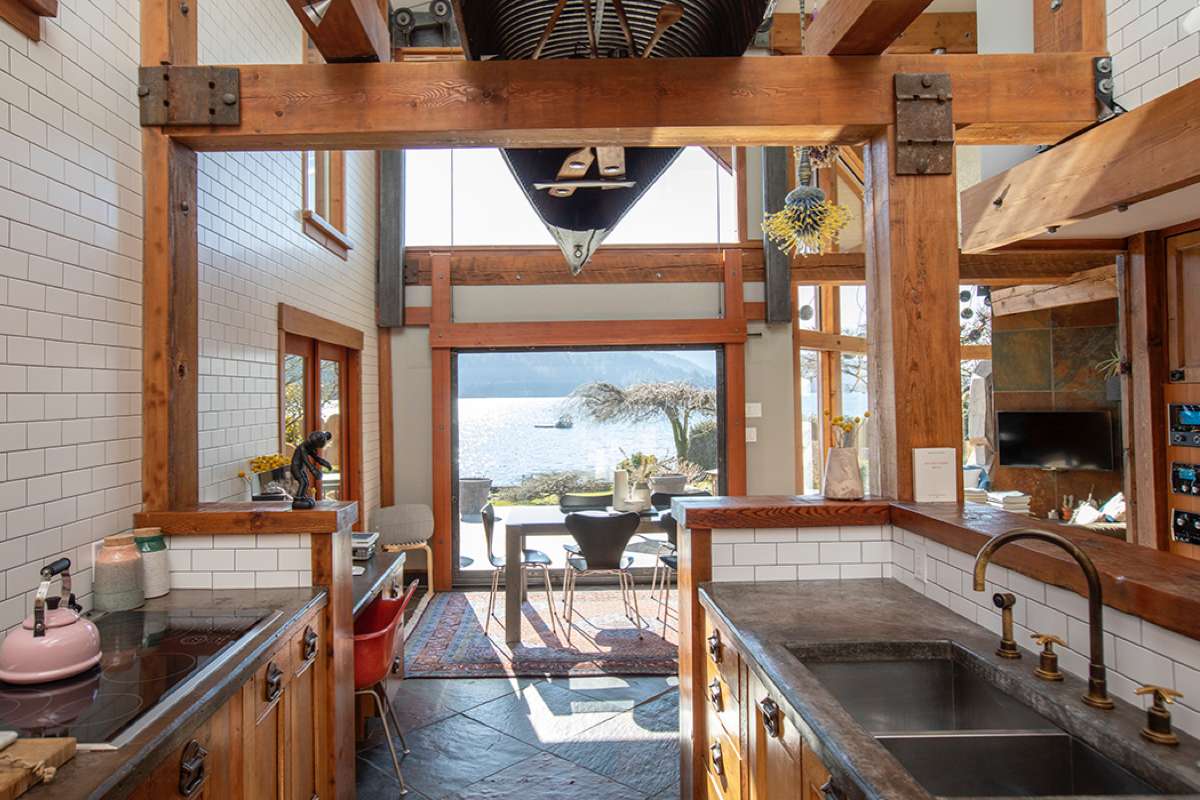