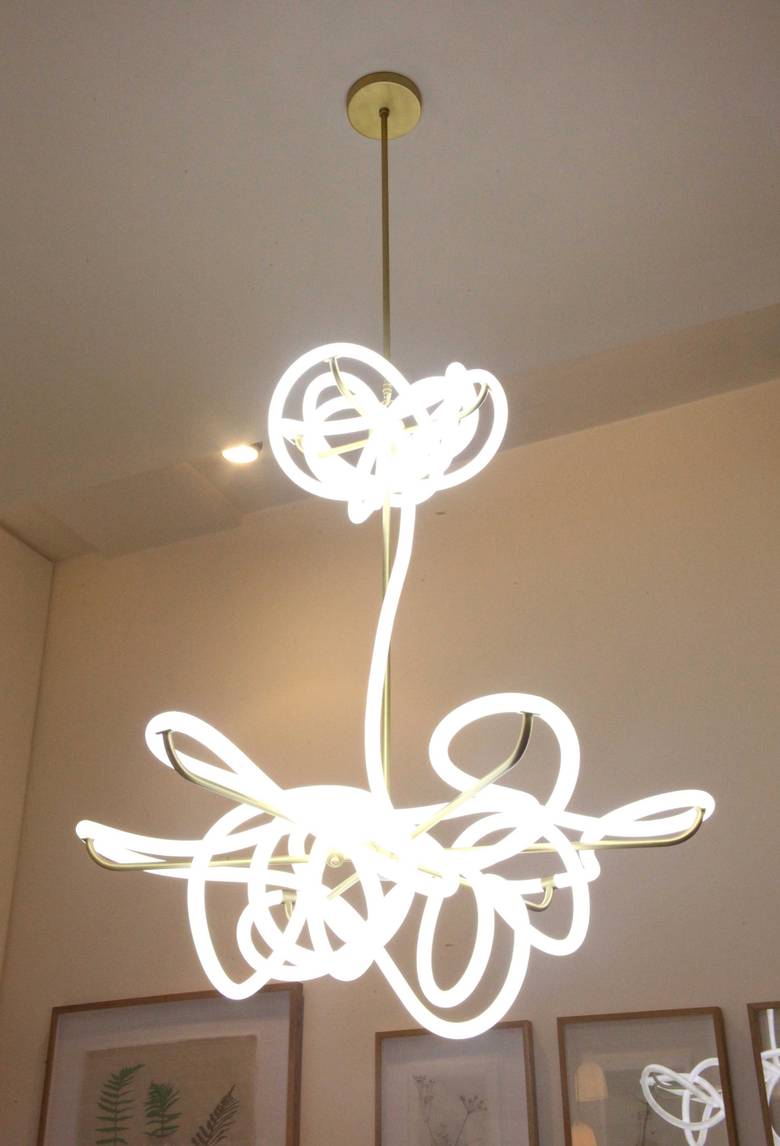 A cumulonimbus cluster of bubbles cast by Cloud is reminiscent of the cosmic phenomena of a starburst galaxy. The Shield, revolving around the earth, keeps asteroids (or dinner guests) at bay while organic Tear lights up a wormhole travelling through the universe. These are not part of the new set design for television’s Star Trek: Discovery or even a NASA project. They’re just a few of the 2016 finalists in Canada’s largest international lighting competition, LAMP (Lighting, Architecture, Movement Project,) announced today from Vancouver. Twenty will be on view at the public Exhibition, Nov.3-6th in Railtown’s Jan Kath Studio where the internationally acclaimed carpet designer provides a galactic backdrop of rugs from his Spacecrafted Collection.

“This year’s theme was Cosmic and we are thrilled that in its 4th year of the competition, LAMP attracted even more entries than in past years – 132 submissions worldwide, from 80 cities and 27 countries,” says LAMP co-founder, Annika Hagen.

“Every year LAMP gets bigger and better with branding and manufacture has always been part of our goal,” enthuses Hagen. “This year we’ve partnered with our sponsor, Light-Resource for Your Design On The Production Line Award, in which a winner chosen from all 132 submissions (not just the finalists,) was selected with the intent of production with one of Light-Resource’s manufacturing partners.” 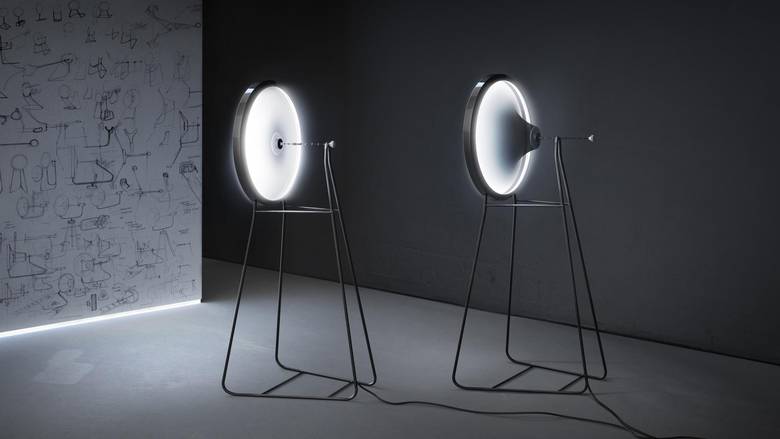 1st Prize in the Established Category: Black Hole Lamp by Dario Narvaez & Anthony Baxter, CurveID, New York Ironically, Dario Narvaez’s passion is usually confined to automotive design, specifically John Deere tractors! Black Hole Lamp is his first foray into lighting design. “This was an extremely complicated project, said the Columbian-born senior industrial designer, by phone from his NY office. “A popular depiction of a black hole is an unseen force of nature drawing light down to a single point in space. Using this analogy, the Black Hole Lamp controls the intensity of the light being emitted by creating a funnel from which the light cannot escape.” In the ‘on’ position the reflective disc of material is fully illuminated, but as the flexible disc is drawn back towards the center of the black hole, the light gets dimmer until it eventually disappears. curveID.com

“I thought this lamp was fantastic – so elegant and I love that you have to pull back the metal “switch” to dim the lighting, as if you’re stretching time and space,” said judge and light-art sculptor, Phillip K. Smith from his Laguna Beach studio. You know, it’s always a dilemma – structure and engineering vs metaphor and poetry, but in the end, a lamp has to be functional. This one has it all.” 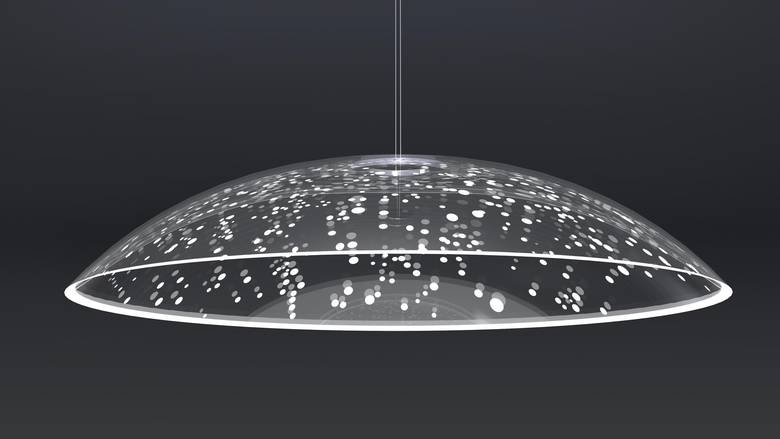 Finalist, Established Category: Diaphanous by Matthew Kennedy, Penticton, B.C.   “I’m passionate about solid state lighting, and have been working on personal projects designing and developing new archetypes in LED waveguide lighting,” says Kennedy, who was also a finalist last year in the same category. He designed Diaphanous as a map to the stars in the Northern Hemisphere, recreating the actual patterns of the constellations by laser-etching them into the inside of the dome, then shining a light from a concealed LED source.Loom Lighting

1st Prize in the Emerging Category: Antitesi by Luca Mazzon & Alessandro Dadone; Bra & Como, Italy
Leave it to the Italians to create something fiery and passionate even when it comes to lighting. The two product designers, fascinated by both the mystical powers of the night sky as well as the spiritual and religious aspects of the universe, created a lamp reflecting both interpretations. Like a sculptural eclipse, Antitesi’s hanging disc made of two layers of eco resin, receives light from a single source and reflects back two different views from a dichroic film. behance.net/ELEMENTO_design 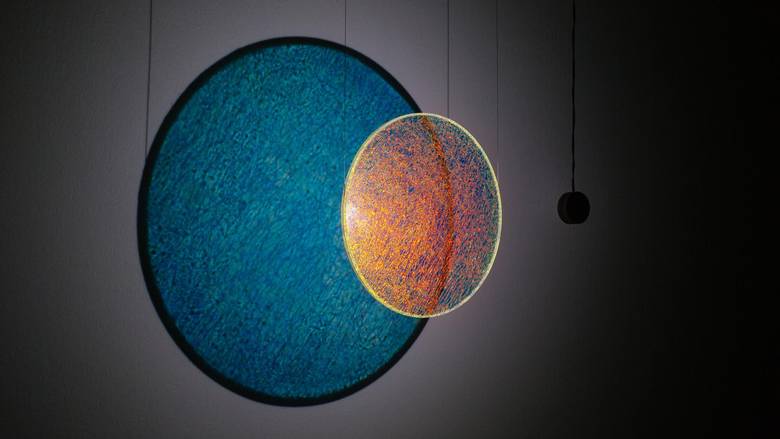 “I love that this lamp is so sculptural, beautiful and delicate,” said B.C.-born judge, Jakub Zak, by Skype from London where he is a design project manager for Patricia Urquiola. “I hope Mazzon and Dadone can find a way to manufacture it.”

Finalist, Emerging Category: Cosmic Chaos by Corinne Mynatt, UK Based in London, Mynatt has lived and worked in Eindhoven, a hotbed for everything design near Amsterdam. “My work is very sculptural,” she says by phone from her hometown of Nashville where she is on a 3-month sabbatical. “I started with almost a doodle-like drawing on paper. I wanted the chandelier to look like neon but it’s impossible to tie neon in a knot so I sourced other materials. The light becomes a chaotic Mobius loop, one that can carry on for infinity, just like space.” corinnemynatt.com

Finalist, Emerging Category: Cloud by Robert Geyer and Rena-Li Kuhrt, Vancouver,. B.C. Cloud is a series of hand- blown glass objects illuminated within by an LED. Blowing molten glass into the inside of a hand- knotted wire cage forms the unique, organic lamp vessels. The copper cage is then removed leaving behind a faint copper shadow in the indents of the glass. sasamatcreative.com 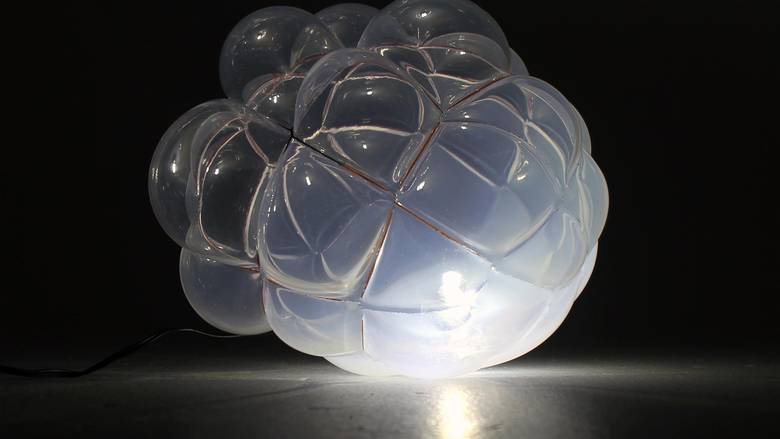 And although it didn’t make the final top ten cut, Jakub Zak also praised Satelight by Belgian industrial product designer, Sep Verboom for its “raw simplicity and use of livable materials” (recyclable aluminum foam.) “You know LAMP makes competition so important because even if you didn’t win, it raises the bar for all the designers.” boomin.be

1st Prize in the Student Category: HENYX by Anna Tomschik, Vienna, Austria HENYX named after the Greek goddess of day, Hemera and night, Nyx, was created by Tomschik who has a Masters in Architecture. She designed a clever bedside lamp based upon the user’s circadian rhythms. Via a mobile app, an individual set- up can be created to vary light intensity and colour based upon temperature. The big hemisphere, ‘the sun’, will gradually illuminate itself in the morning linked to the alarm clock. The smaller hemisphere, ‘the moon’, features soft and reflected light for bedtime mode. 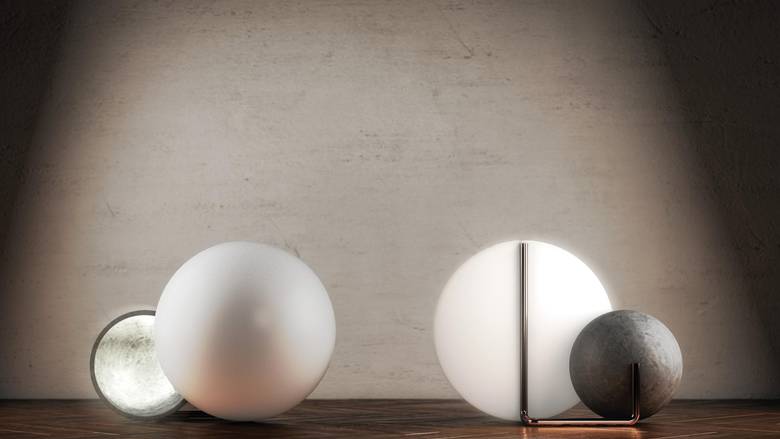 Winner, Light-Resource Your Design On The Production Line: Cosmos by Nathaniel Ng, Singapore
Inspired by the unplanned yet complex and orderly system of cosmic space, each arm of Ng’s lamp is connected by bearings that allow it to swivel. The 4 spiral arms emulate our galaxy, the Milky Way. Cosmos can be used as both a pendant light or standing lamp.