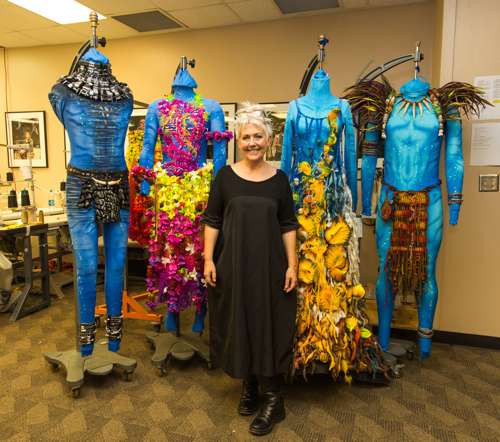 As a child growing up on tropical Christmas Island, an isolated and rugged Australian territory dotting the Indian Ocean, Kym Barrett was surrounded by a kaleidoscope of exquisite sunsets, spectacular flowers, lush coral reefs and exotic birds. In fact, it is so far away from other archipelagos geographically, that many species are indigenous to only that island.

That sounds uncannily like the fictional moon of Pandora – but without the blue Na’vi people!

The petite platinum blonde is laughing on the line from her home base of Los Angeles when she hears that comparison. Barrett is the award-winning costume and make-up designer for the touring production of Toruk: The First Flight, created by Michel Lemieux and Victor Pilon of Canada’s Cirque du Soleil. It’s inspired by James Cameron’s film, AVATAR. “Well, it certainly encouraged my imagination – that and reading crates of books,” she says of living the nomadic life. “We didn’t have a TV growing up but we saw a lot of Hong Kong action flicks and Westerns at the outdoor theatre.”

Barrett, 51, is no stranger to parallel universes, extraterrestrials, super heroes and heroines and in fact, she’s the ultimate time traveller. Her costuming for all three futuristic The Matrix blockbusters in which she put Burnaby-born actress, Carrie-Anne Moss (aka Trinity) in a sexy black vinyl catsuit and protagonist, Neo, played by Keanu Reeves in a sweeping black leather trench, induced an avalanche of fashion designer collections. Global trends in 2003 included streamlined and street-tough fashions, ranging from Balenciaga’s leather leggings and trench coats to Dolce & Gabbana’s cropped leather jackets and multiple-buckle pants.

Her intricate 3D textured designs for what would become the iconic suit for The Amazing Spider-Man in 2012, spawned millions of Halloween knock-offs and is still a favourite costume among trick-or-treaters.

Just as Barrett and her team’s designs for the amphibian-themed costumes for Cirque du Soleil’s Totem had to reflect the evolution of civilization’s life on earth, so too did those of the five symbiotic clans inhabiting Pandora– but 3,000 years before events depicted in the film, AVATAR.

“We started working on sketches two years in advance of Toruk’s opening, meeting with James Cameron in Los Angeles. He was very generous of spirit,” says Barrett. “While we worked within the parameters of Pandora, we had room to create our own version of the mythical first flight. The costumes had to look very organic, like they were hand-made by the Na’vi from their natural environment using seeds, vines, shells, leaves, flowers, even bones.”

The performance space for the production takes place in mammoth arenas and not under the more intimate Cirque Grand Chapteau. That meant that everything had to be larger than human life – literally. “Because the Na’vi are 10-feet tall, we raised the chest and elongated the thorax for costumes, even positioning the nipples and belly buttons higher,” Barrett explains. 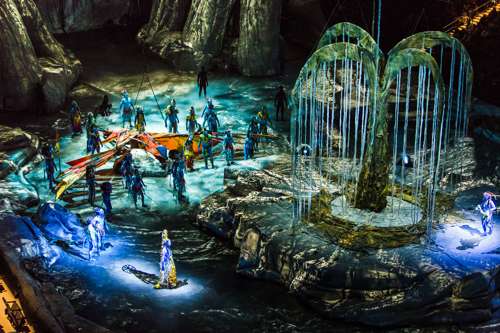 Kym Barrett chose four different blue base skin tones to account for natural DNA variations among the Na’vi people. Then, twenty-five different skin base variations were silk-screened and printed onto an optical white synthetic fiber similar to a moleskin, that is light-weight for acrobatics, repels sweat and dries quickly. Muscles, distinctive stripes and other distinguishing skin characteristics of each clan were hand-painted with a product that gives a bioluminescent effect with the spectacular lighting and projections used in the show. Although they are morphologically similar to humans, the Na’vi have a wider nose and larger eyes, dramatically illuminated for audience sightlines. “Performers were taught how to apply their own character make-up in several steps and of course they get faster at it as the tour progresses,” Barrett affirms. 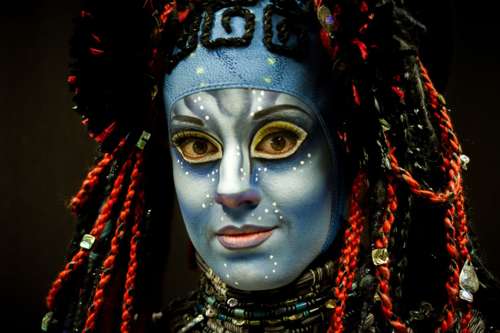 In a behind-the-scenes tour in Vancouver of the Toruk wardrobe department prior to opening night, the ingenuity of Barrett and her team is really apparent. There are 115 costumes in the show custom-made at Cirque’s headquarters in Montreal, (approximately 3 per 41 artists.) Wardrobe created over 1,000 headpieces, necklaces and shoes; extraterrestrial flora embellishments on garments emerged from molds of cabbage leaves and loofah sponges; vests from decomposed hammocks and loincloths that resemble leaves were made from stiffened crinolines. A wardrobe manager and three assistants tour with the production and are constantly sewing, re-painting, dyeing touch-ups and yes – washing costumes. Silicone shoes and ears really take a beating with an occasional blue lemur-like tail wardrobe malfunction needing ‘surgical’ reattachment by sewing and industrial-strength Velcro.

Already well into her next costuming project, she and her team have morphed into the mythical underwater realm of Atlantis for the anticipated 2018 blockbuster, Aquaman. Says Kym Barrett, “That’s 8 months on location in Australia – I can never get bored