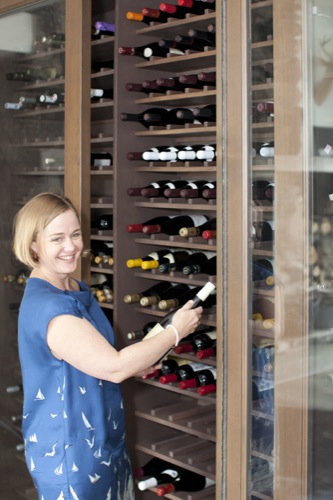 Passionate about their work- influenced by their travels to Europe, the Caribbean and South America and avid readers of architectural styles and design, Heidi Noble and Michael Dinn appear to be a pairing made in food and wine heaven. In the ‘90s, Noble, a classically trained chef and sommelier, who worked previously at Montreal’s Toqué and Agora at the Art Gallery of Ontario in Toronto, moved west to Vancouver where she met Dinn a sommelier, at C Restaurant and Cin Cin. They both decided to leave the grinding Vancouver restaurant trade and began working in the wine importing business. Engaged in Naramata in 2000, the couple, on a whim, asked a realtor to show them around and they purchased a rundown farmhouse on a 5-acre property. Noble and Dinn frugally renovated it to open a B&B, cooking school and winery that also served as their home.

Experimenting with Alsatian and Burgundy inspired grapes that thrive in the cool mountain desert climate of the Okanagan, their first vintage in 2002 was a trial by fire made in a rented space at a friend’s winery. 800 cases sold-out as did subsequent crushes. Twelve years later JoieFarm Winery produces about 14,000 cases annually and has earned many awards and kudos.

A Noble Blend became a cornerstone for their expanding business while their wine importing expertise and intuition were spot-on with ‘Re-Think Pink’ Joie Rosé made in the dry Loire style – it revolutionized the industry. Rosé was in vogue again.

By 2007 the JoieFarm Winery brand’s success necessitated a dedicated custom-built winery building. But it wasn’t until their son, Theo was born in 2011 that they realized the cramped farmhouse was just not conducive to a growing family and they purchased a 12-acre property with a house ready to be torn down, at the beginning of the Naramata Bench, with spectacular views of Munson Mountain and Okanagan Lake.

“We had been percolating ideas for the design of a new home for years,” reminisces Dinn. We’ve taken many trips to Palm Springs in the past and just loved their mid-century, post and beam homes in neighbourhoods like Racquet Club Estates – in fact Heidi’s parents have bought there.”

They immediately called architect Lucia Sakhrani, Design Studio 8 in West Vancouver. Friends for over 20 years (“her husband Chris was my best man at our wedding,” says Dinn,) she knew exactly the style and feeling the couple envisioned.

“Heidi had done a great deal of research on Japanese farmhouses called minkas with expansive courtyards and breezeways and we all loved mid-century modern rancher. I spent so much time on-site just to calculate the directions of the sun and light – both beautiful and oppressively hot at times. Heidi and Michael love to cook and entertain al fresco and in their old farmhouse that meant passing through the living room, dining room with plates of food, with an added flight of stairs. Picking herbs required a trip around the house. So the new home was to have none of that!”

Sakhrani created a roofline that consisted of low-slung gables connected by flat roofs with glass windows at the top that open for ventilation. “Heidi and Michael were clear that they didn’t want air conditioning so ceiling fans were installed.” 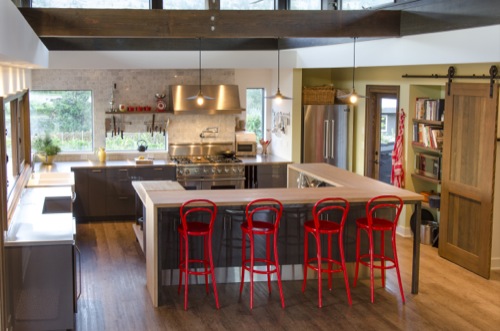 “The positioning of the new kitchen was critical,” explains Sakhrani “because it’s the epicenter of their home. I love cooking with Heidi and we actually cooked a meal to map out everything. This is definitely a ‘function follows form’ space. Heidi is tiny at 5 feet and Michael is 6’1” and Theo has a step stool, so we made adjustments in counter and island heights to follow a logical flow for prepping, cooking and storage. I actually mixed Ikea cabinets wrapped in customized elements of a steel framed raised bar, maple countertops and wood shelves stained to match the other wood elements throughout the home.”

The master suite and Theo’s bedroom were deliberately positioned in another wing to off-set noise; both resplendent with wonderful views of the lake and Munson Mountain.

The pièce de résistance of the 3,600 sq.ft., four bedroom rancher that took about 18 months to build, is a stunning floor to ceiling natural stone fireplace in the great room. “Heidi and I had actually gone to Vancouver to take a one day course in Italian stuccoing for the surround of the fireplace,” relates their affable builder, Nick Hill of Ritchie Custom Homes in Penticton. But the couple changed their minds shortly after I introduced them to local Finnish stonemason, Moe Kuoppola. He hiked the surrounding Carmi Mountain and brought back lichen-covered rocks to build the fireplace.”

“ We really focus on lifestyle when we are building for clients and I knew that Heidi and Michael wanted to use reclaimed salvaged fir from the West Coast so Heidi and I went to a Coquitlam timber yard to hand-pick wood for the beams. It was a real adventure!”

The exterior terrace, pool and landscaping designed by Sakhrani is a tribute to the couple’s joy of outdoor entertaining: accordion glass doors open onto a concrete teak wrapped patio with firepit, full outdoor kitchen with Forno oven , hot tub and a charcoal gray tiled pool, the latter actually cooled with solar power.

Both Noble and Dinn are yoga buffs and Sakhrani created an out building studio/cabana that can do double duty as an extra bedroom in a pinch.

Every design detail has been scrupulously thought-out yet doesn’t look contrived: from the pops of red in the simple interior’s décor that tie- in with the “Joie Red” of industrial car paint Sakhrani used on the doors to keep them scratch resistant from the couple’s dogs going in and out, to –yes – the chicken coop.

Noble really does love chickens so Sakhrani designed their modern abode with a roof that mimics that on the main house!

Says Dinn, “Our son Theo looks after the chickens and collects the eggs. There’s nothing more delicious than a fresh farm ‘dipper’ egg with toast soldiers for breakfast.”