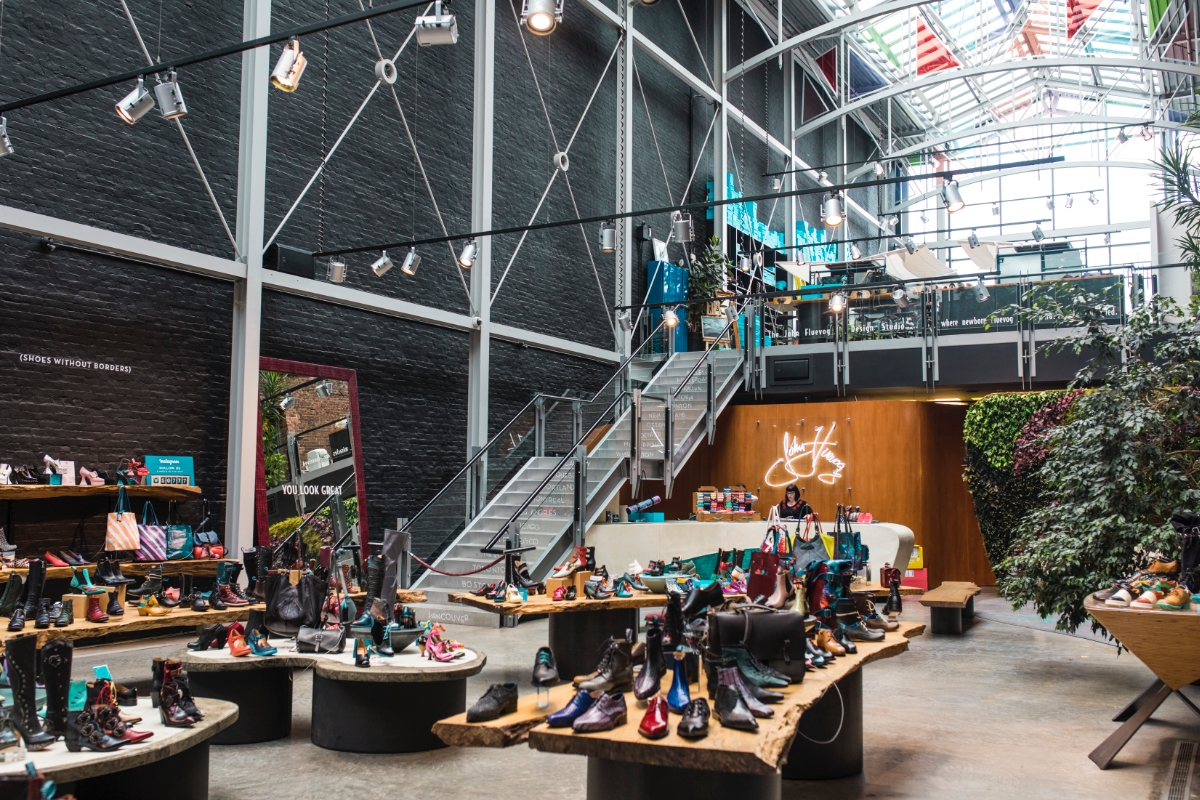 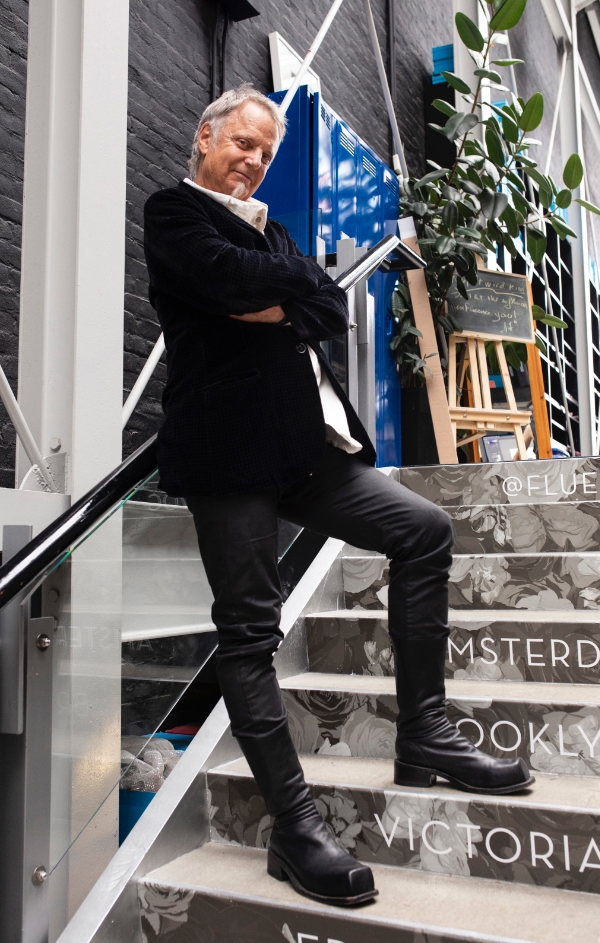 Be your true self. Exceed your own expectations. Wearever you go, give thanks.
These are not your usual fortune cookie homilies. Instead, turning over a John Fluevog shoe, you read an uplifting message on its sole. “These phrases form part of the energy and vibe around my shoes and are as important to me as the shoes themselves,” admits the 71-year-old inspirational designer from his Gastown headquarters in Vancouver.

Fluevog recently took his messaging a step further when he created a capsule collection of limited edition shoes in tribute to Dr. Bonnie Henry, Provincial Health Officer for British Columbia and an avid Fluevoger: Be kind, be calm, be safe, Dr. Henry’s mantra during the Covid-19 pandemic is emblazoned on the soles with 15% of proceeds donated to the WHO’s Covid-19 Response Fund. When a pre-sale of hot pink leather & patent Dr. Henry’s went online in April, the Fluevog site crashed with overwhelming support. He has since added two more colourways in black and blue for his 2020 Dr. Henry fall/winter Collection. 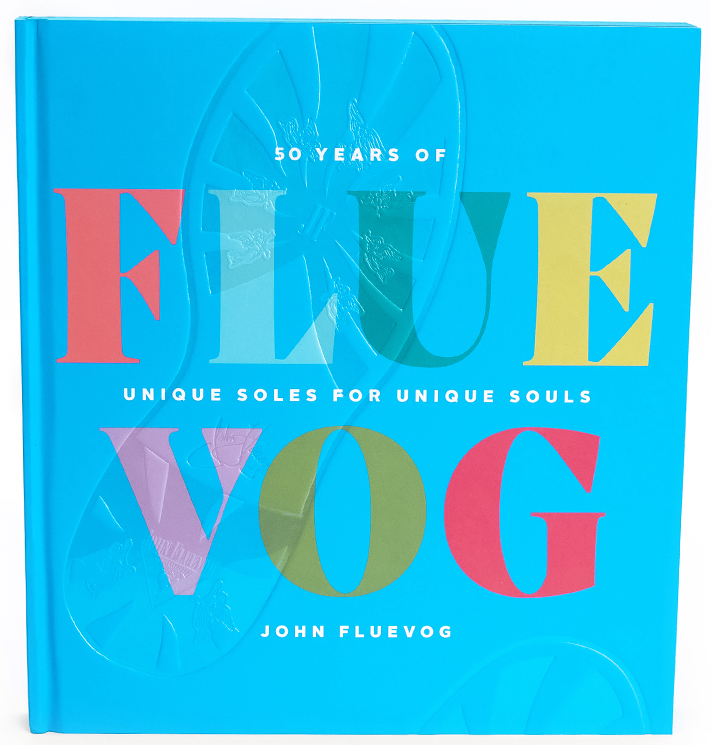 Part visionary entrepreneur and creative philanthropist with a liberal dash of hippy- dippy, Fluevog is a survivor. His conversation fluctuates from humble and down-to- earth to spiritual and dreamy as he reflects back over a counterculture history in which many other independent retailers have long since disappeared. He recounts all his ups and downs in his new coffee table tome, 50 Years of Fluevog: Unique Soles for Unique Souls. It’s a fascinating and colourful ode to diversity and early awareness of environmental hazards in the fashion industry, long before they became today’s trendy buzz-words.

What’s in a name? Everything when it comes to branding. His unusual moniker isn’t a fabrication but derived from Fluevaag, Norway, the hometown of John’s grandparents. They adopted the name when they emigrated to the U.S. and, it’s become so synonymous with his quirky shoes, that his loyal followers that include Lady Gaga, Beyoncé, Scarlett Johansson and Alice Cooper, are known as Fluevagers.

“I always start with an idea thinking how can I make a person feel good,” he says from the spectacular 5,621-square-foot store that was constructed in a vacant lot between two heritage buildings and is topped by a 43-foot-high glass atrium. 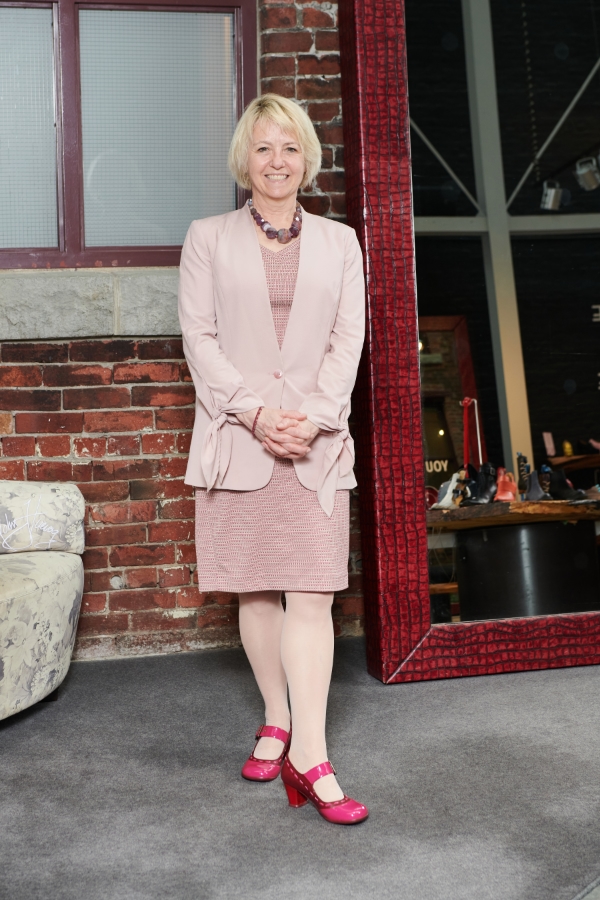 The Vancouver-born Fluevog who struggled in school with dyslexia, was at a loss as to a clear career path, so he began working at Sheppard Shoes in 1970.

“That’s where I met Peter Fox, a very cool English art student and designer and we eventually became partners forming Fox and Fluevog and signed a lease in Gastown. The interior design then was loosely based on the library scene in the 1938 movie, Pygmalion. I used to come to work dressed up in a three-piece suit, knickers and buckled shoes,” he smiles.

“We started selling platform shoes and people were flying up from L.A. to buy them. In 1970, director, Robert Altman bought knee-high boots from us when he was in Vancouver filming McCabe and Mrs. Miller with Warren Beatty and Julie Christie,” he reminisces.

Fluevog thinks they were probably the first store in Canada to carry British-made Doc Martens shoes in 1973, and of course with the popularity of punk and grunge, they became the footwear of the music scene world-wide. Following an amicable partnership split in which Peter Fox moved to New York in 1979, John Fluevog Shoes was born and John, who never considered himself creative, started to design his own footwear. His love for vintage cars – their cool contours and bright colours directly influenced his shoe designs.

“In 1986, I started sketching a shoe with a pointy Western toe, a big buckle and a flat heel. I called it The Pilgrim,” he explains. When the design morphed into The Munster, a colourful buckled shoe with a curvy platform baroque heel worn by fashion muse, Lady Miss Kier then Madonna in the film, Truth or Dare, John Fluevog Shoes really took off internationally.

In the 90’s, his Angel soles originally came from rubber derived from the sap of the Hevea tree in Southeast Asia. “Not only was that very expensive but depleted those forests so most of our products use eco-friendly synthetic latex now,” says Fluevog.

“I always liked naming my shoes and putting them into ‘families,’” he confides. Over 50 years, Fluevog has created 300 shoe families and thousands of styles. Family also extends to those artisans he visits each year in Portugal, Peru and Vietnam who hand-make each shoe to his design specifications.

Giving back to the community is very important to Fluevog who created The John Fluevog Shoes Emerging Artist Grant, awarding $10,000 to one artist across multi- disciplinary fields each year while Fluevog Creative gives talented graphic artists an opportunity to design an ad for publication.

With 26 retail stores across North America, one in Amsterdam and most recently, Melbourne, his son Adrian Fluevog joined the company as CEO overseeing operations world-wide.

But don’t think Fluevog Sr. is retiring anytime soon. Whether he’s collaborating with American fashion designer, Anna Sui or designing the funky footwear for the Beatles’ inspired 2018 production of As You Like It at Vancouver’s Bard on the Beach, “I just have so many ideas and love connecting with the community too much to retire yet,” he laughs.