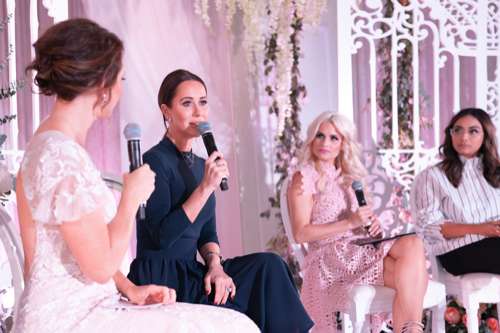 “You know, the royal wedding was beautiful but it was just like any other wedding watching one of your best friends get married to the person they love – it just happened to be on a way bigger scale with a lot of people watching,” Mulroney related with a knowing smile having chosen her words carefully.

That comment elicited a lot of laughter from the packed ballroom.

After all, for a year leading up to and including the most talked-about televised nuptials of 2018, it was definitely not your average wedding. Although Mulroney is thought to have been the royals’ wedding planner, she remains adamant about not divulging any personal details pertaining to the Duchess of Sussex.

Poised and chicly attired, Mulroney is no stranger to celebrity. Growing up in tony Westmount, Montreal she was a school friend of former Canadian Prime Minister, Brian Mulroney’s son Ben, who is currently the anchor of CTV’s etalk and Your Morning. They married in 2008.

Mulroney cut her teeth on two family businesses; her father, Stephen Brownstein’s clothing manufacturing company and her cousin’s Browns Shoes empire. She was also an ambitious entrepreneur, partnering with her sister, Elizabeth to bring in the Italian luxury lingerie lines, La Perla and Cosabella to Canada both in demand by many brides-to-be. 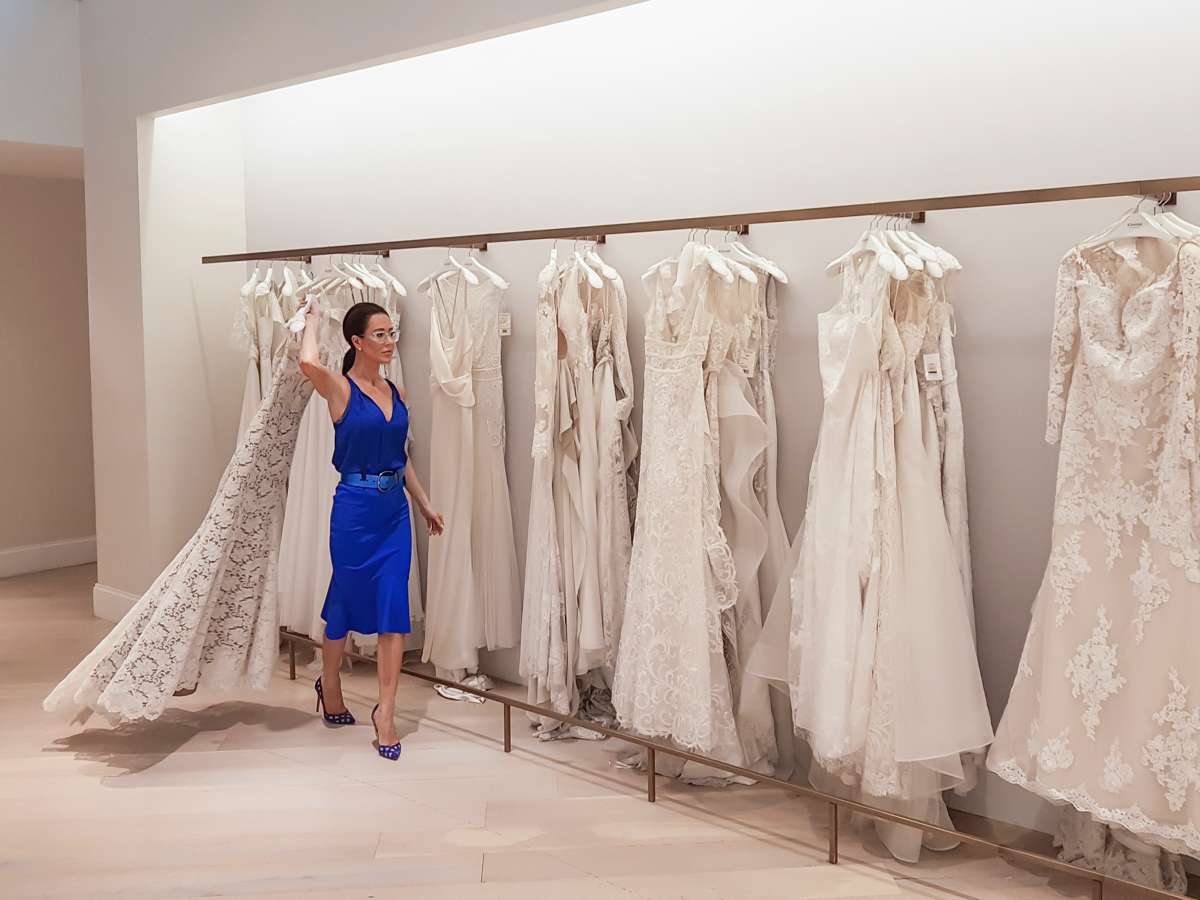 “I had just had my third child, Ivy, when I got a call from Bonnie Brooks, who was then the CEO of the Hudson’s Bay Co.,” Mulroney relates. “They had just licensed a brand from Manhattan called Kleinfeld Bridal (their showroom was the backdrop for TLC’s popular reality show, Say Yes to the Dress,) and the challenge of launching and building a brand from scratch here was really interesting to me. I was thrown into the bridal world, did lots of research and I just loved it.” Mulroney has been PR Director of Kleinfeld Bridal at HBC since 2014.

A go-getter in her own right and based in Toronto, the stars aligned when she met former American actress, Meghan Markle in 2016 when the latter was shooting the series, Suits for Netflix. They bonded over their shared love of yoga, fitness, fashion and travel. When Prince Harry began dating Markle that summer and the couple were besieged by paparazzi, the Mulroneys offered their home as a quiet sanctuary. 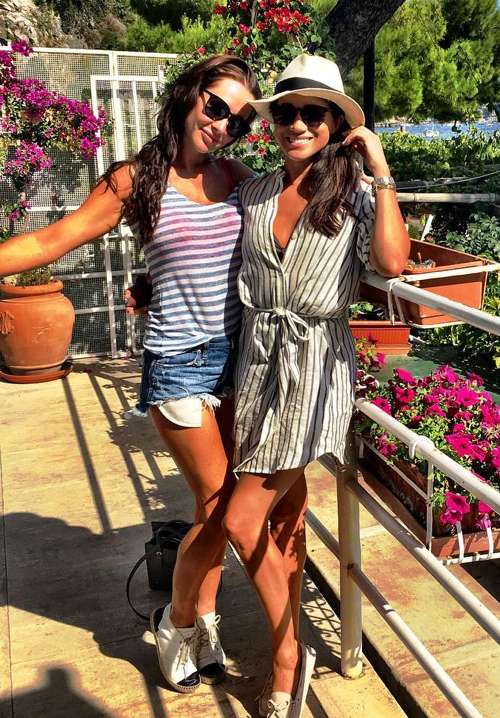 In 2018, not only did the entire Mulroney family attend the royal wedding at Windsor Castle but their identical twin boys, Brian and John were pageboys assigned to carry Markle’s exquisite 16-foot floral -embroidered wedding veil designed by Clare Waight Keller for Givenchy. Four-year-old Ivy was a flower girl.

Mulroney has always been a passionate champion and influencer for CanCon fashion for friends, clients and on her regular appearances for CityLine : from the elegant white wool wrapped coat by Toronto’s, Line worn by Meghan Markle at her engagement announcement to Prince Harry; Sophie Gregoire Trudeau in a Sentaler coat, dresses by Lucian Matis and jackets by Smythe (also a favourite of HR Duchess of Cambridge, Kate Middleton,) to styling looks for Shania Twain in Canadian label, Greta Constantine.

“Working with real women answering real fashion questions is my absolute favourite,” Mulroney admits. Her newest incarnation as bridal and fashion contributor to ABC-Television’s Good Morning America with host, Robin Roberts, allows her to do just that.

“I was so proud to be able to take what I’ve done up here at home, south of the border on Good Morning America,” says Mulroney. “They try to get me on about twice a month and I usually fly into New York a day -and -a -half before my segment to ensure that we have everything we need; the models are properly prepped and I can be as prepared as possible. One thing that has pleasantly surprised me is how eager they are to occasionally let me celebrate Canadian designers. It has been my stated goal for years to help members of our incredibly creative fashion industry gain as much exposure as possible and GMA is about as big a platform as one can find!” 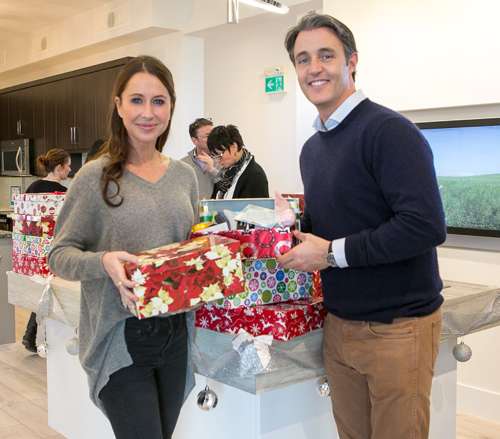 Both Jessica and Ben Mulroney have long been involved with the charity, The Shoe Box Project, an idea created by Jessica’s mom, Veronica in which hundreds of empty shoeboxes are filled with toiletries and delivered to women’s shelters across Canada and the U.S. The initiative started with an annual Christmas holiday drive and now extends to Mother’s Day and on International Women’s Day.

“You know, Ben and I live by a pretty simple code: you are not your job,” Mulroney confides. “Our jobs may be in the public eye and people may view certain aspects of them as fun, high-flying or glamorous, but the fact is, we are a couple who love each other and who want nothing more than to work hard, help others and then come home every night to our children. I think living that truth is the easiest way to let your kids know that the truest happiness comes from friends, family and doing good for others.”