LAURA GOLDSTEIN. Special to The Globe and Mail

“The Pacific Northwest has experienced a major design boom and we really need to recognize ourselves as world-class,” says Jody Phillips, IDS-Vancouver’s show director.

Now in its 12th year, it may be Toronto’s Interior Design Show’s younger sister, but it’s no shrinking violet, annually attracting 36,000 people to view 275 designers, speakers and distributors. “In addition to Vancouver’s hotbed of talent, we’re really excited about the Dutch Exchange: Eindhoven,who are at the forefront of global design with curated installations at the show by Design Milk.” Having featured design exchanges from Los Angeles and Brooklyn in the past, Eindhoven, a small city south of Amsterdam, has attracted a large coterie of experimental young designers from which IDS-Vancouver has chosen four to showcase. Each will have an opportunity to discuss how their city has impacted their work. In addition to experiencing installations and features, there will also be speakers from some of the design world’s most notable and talented personalities and connect with a long list of world-class designers that either call Vancouver home, or call on Vancouver for inspiration. New this year is Clay & Glaze; a curated installation of contemporary pieces by invited regional and international ceramicists.  Headliners, like British industrial designer, Tom Dixon and LA’s award-winning interior designer, Barbara Barry, also join the jam-packed roster. 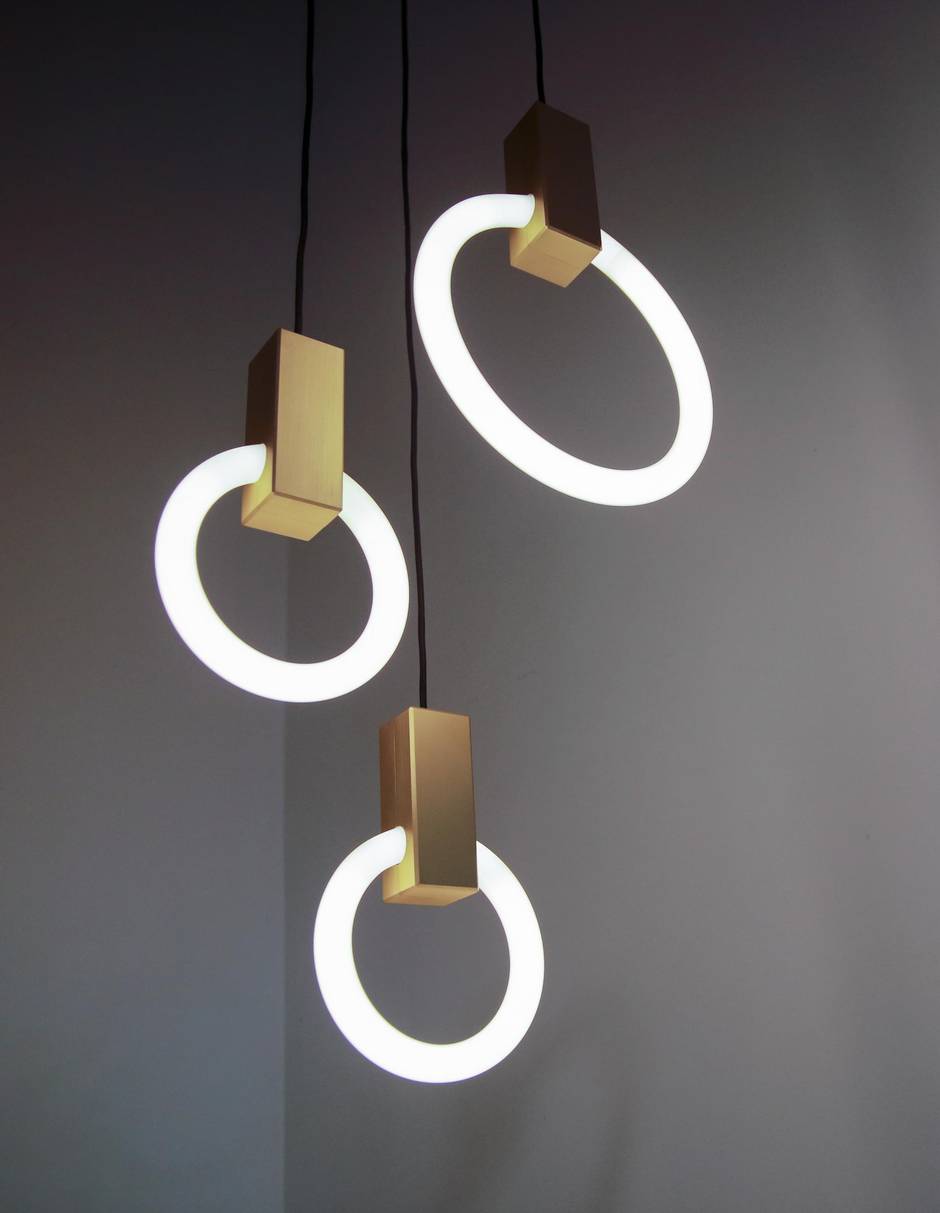 Recently awarded Industrial Designer of the Year by Western Living Magazine, Vancouver’s Matthew McCormick takes his inspiration for lighting shape and form “from anything – jewellery, garbage, even the Millennium Falcon from Star Wars, ” he laughs. In fact, the former graphic designer and ad director created one of his most popular pendants when he conceived his interpretation of bubbles by riffing on the idea of effervescence on a dinner napkin. Halo is a bold lamp inspired by the soft warm glow that bubbles exude. Machined and hand-finished, they are available in brass, copper, nickel and 24-karat gold. When suspended in a modular system, Halo pendants resemble a sculptural art piece. For IDS-Vancouver, McCormick combines Dawn, Halo and Dodeca pendants for a spectacular ceiling installation. 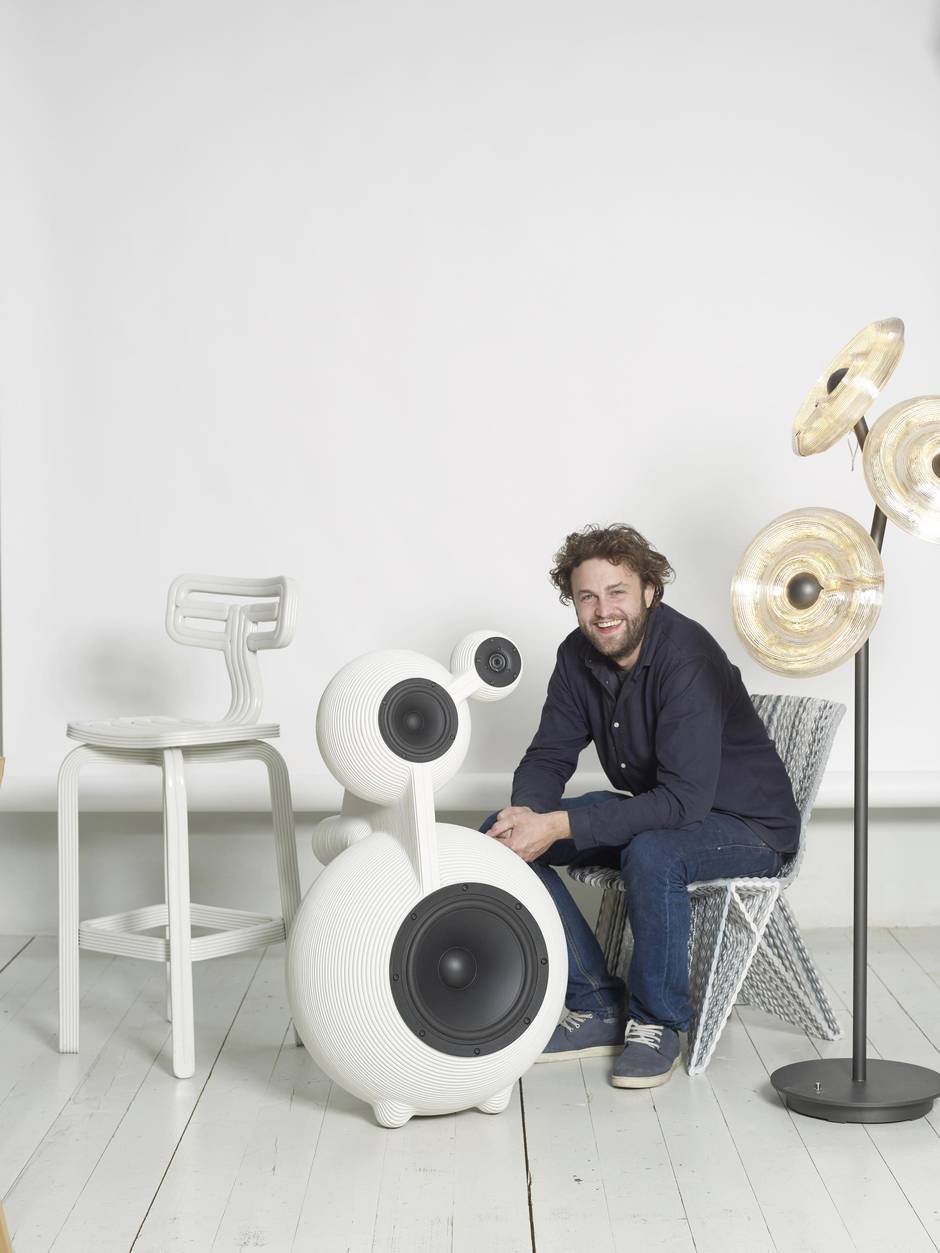 Playfully cheeky, Dutch Studio Dirk Vander Kooij’s furniture evokes an Alice In Wonderland response – “curiouser and curiouser” with products that are never what they seem. Deceptively sculptural yet functional, the more you look at them, the more they seem to challenge the imagination. When he couldn’t find any 3D printers large enough, Vander Kooij actually built the first 3-D-printing industrial robot for furniture in his studio in Zaandam in the Netherlands. It spits out recycled plastic from synthetic leftovers from the tip of its robotic arm. Molten disposable plastic gets the sturdiness and strength of marble for his thick-lined Chubby Chair, acquired by MOMA in 2012. For Melting Pot Table, Vander Kooij explains, “I throw in old toys, melted pieces from refrigerators, a computer keyboard – just about anything and the result is a bold and stylish table with magnificent patterns and colours, and no two are the same.” 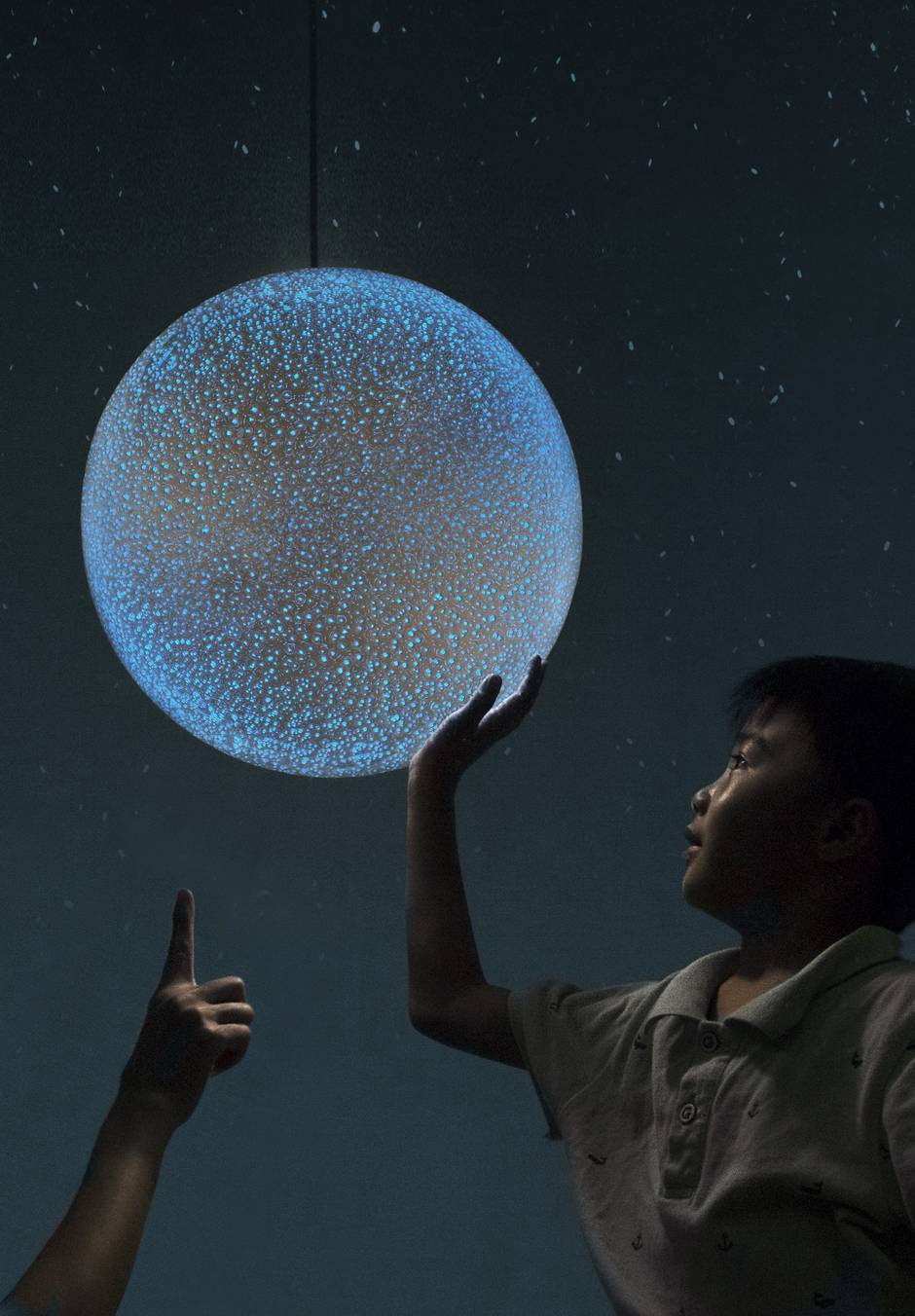 Designer, Tineke Beunders, one half of Ontwerpduo is the dreamer; Nathan Wierink, her partner in business and life, the mathematician. “It’s where the poetic and practical converge,” laughs Beunders from their studio in Eindhoven, where most of their quirky products are manufactured. The minimalist Novecento Collection is inspired by housewares used by their Omas, (grandmothers) then given a modern spin. A two-sided ash cutting board incorporates the perforations to catch the breadcrumbs; the steel and powder-coated Cageling makes a popular indoor or outdoor perch. Premiering at IDS-Vancouver: Glow, a clear LED glass globe with white spots that slowly dissipate to a mesmerizing blue “glow” at night lasts three hours after solar-or-light-charged during the day. 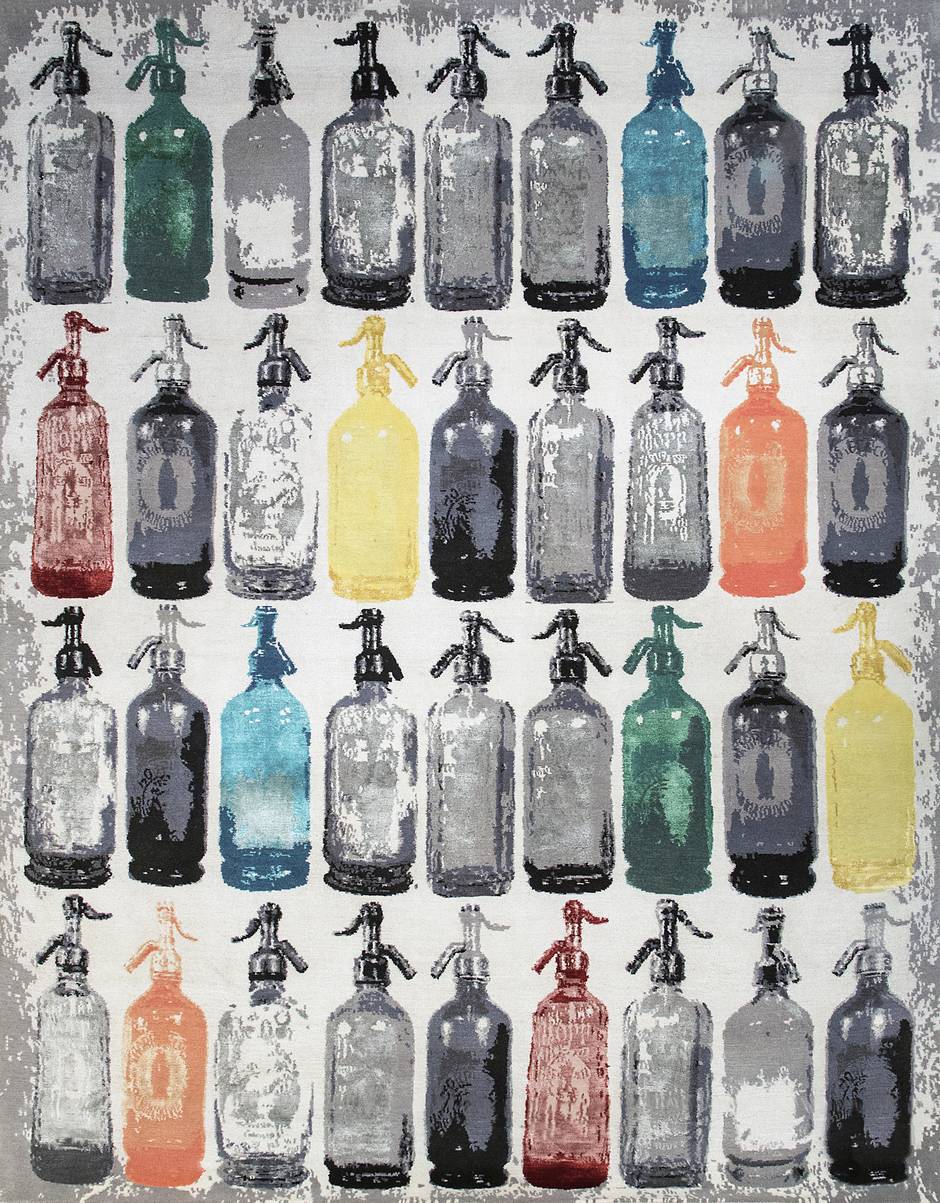 Established in 1907, Vancouver’s Burritt Bros. carpet purveyors,  has partnered with the Museum of Vancouver (MOV) to bring a piece of history to home decor. The custom design team of Keith Donegani, Ainsley Jones and Nikola Boyd, explored the storage vaults of MOV and discovered an evocative collection of seltzer bottles.

“They were delivered by horse and buggy to Vancouverites in the early 1900s, and we thought a colourful carpet would make a great homage to another tradition of hand-crafted goods,” says Donegani. Giving a Warhol vibe in the layout while staying true to archival colours, the Seltzer Bottle Rug incarnation is created from Himalayan wool and viscose or Chinese silk, dyed and woven by hand in Kathmandu. For each carpet sold, MOV receives a royalty towards its school tour program.

Available in all standard and custom carpet sizes. 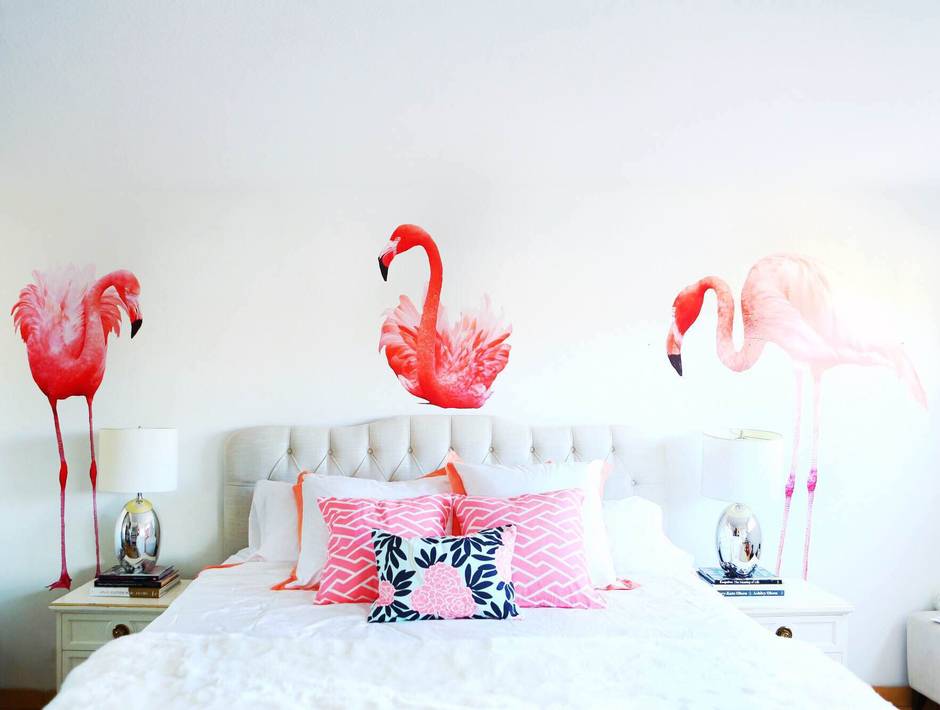 Who says wall decals are only for nurseries and kids’ rooms? Vancouver graphic designer, Danielle Hardy of UrbanWalls, has created an international niche for every room in the house. “They’re wallpaper without the expense, and because the decals are made of vinyl and can be easily removed, (but not reused) they’re great for renters,” she says. Dye-cut or printed in a spectacular array of colours including custom, a client in Beverly Hills opted for flamingos in the master bedroom; another, palm tree decals in the living room, graphics in a loft and romantic “wall quotes” in a bathroom. 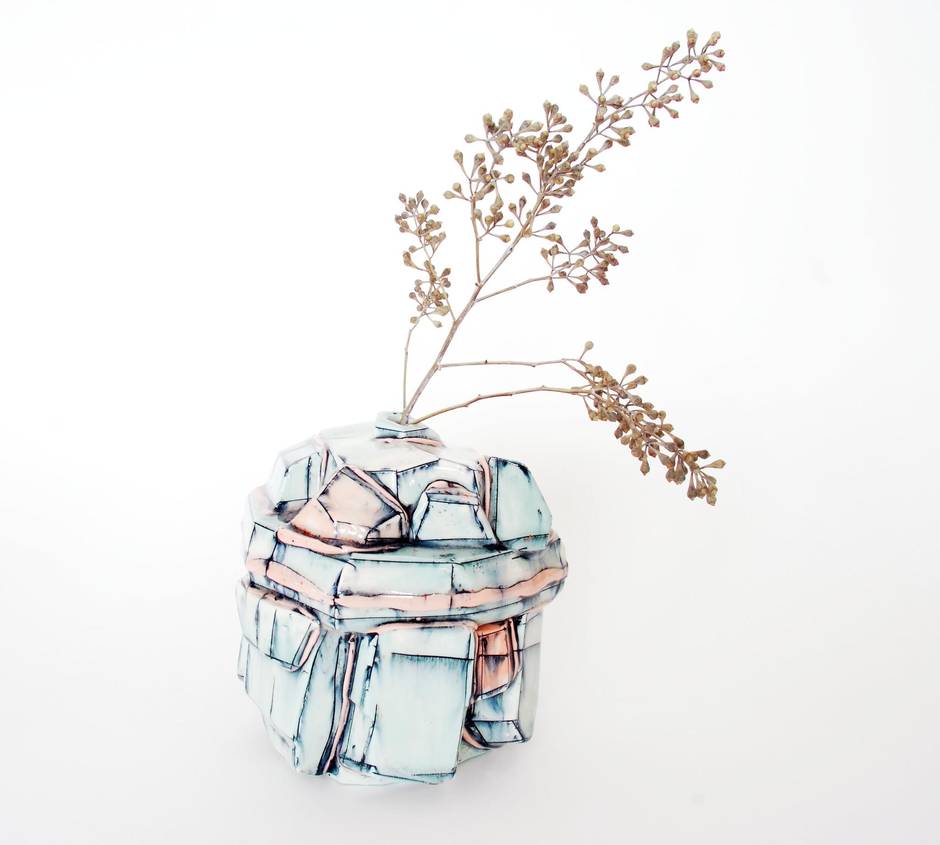 Ceramicist, Brett Freund’s vessels are cubist riffs on architectural structures that bring to mind Frank Gehry, pop art and even Turkish delight. Originally from industrial Pittsburgh (which also informs his designs,) Freund 3-D prints the initial prototype then pours in painted liquid slip to create the moulds in porcelain. Freund then cuts and pastes large gem-like chunks of clay in building blocks around each piece. Says Freund: “It’s a way to express my emotions, and my moods reference the way I attach things with colour and thick black lines.”

Award-winning British industrial designer, Tom Dixon headlines IDS-Vancouver with the North American debut of his Caesarstone, multisensory “Fire Kitchen”. He was front and centre at Milan Design Week with four sculptural quartz working kitchens, inspired by “Earth”, “Water”, “Air” and“ Fire” installed in “The Restaurant”. At IDS-Vancouver, a local chef will prepare blazing samples of food in the “Fire Kitchen” that have been smoked, seared and burned (in a good way,) for Exhibition-goers. The “Fire Kitchen” is inspired by charred wood and smoke, using blackened beams and hints of gold in combination with Caesarstone’s dramatic vanilla, noir, raven and coastal grey quartz. It’s not surprising that Dixon chose the kitchen to inform his vision. An accomplished chef himself, he said from London: “There’s no secret that the kitchen is the most popular place at parties – everybody is a mini celebrity chef these days.”

He also partners with Inform Interiors for a pop-up retail store making available many of his newly launched accessories to the public. 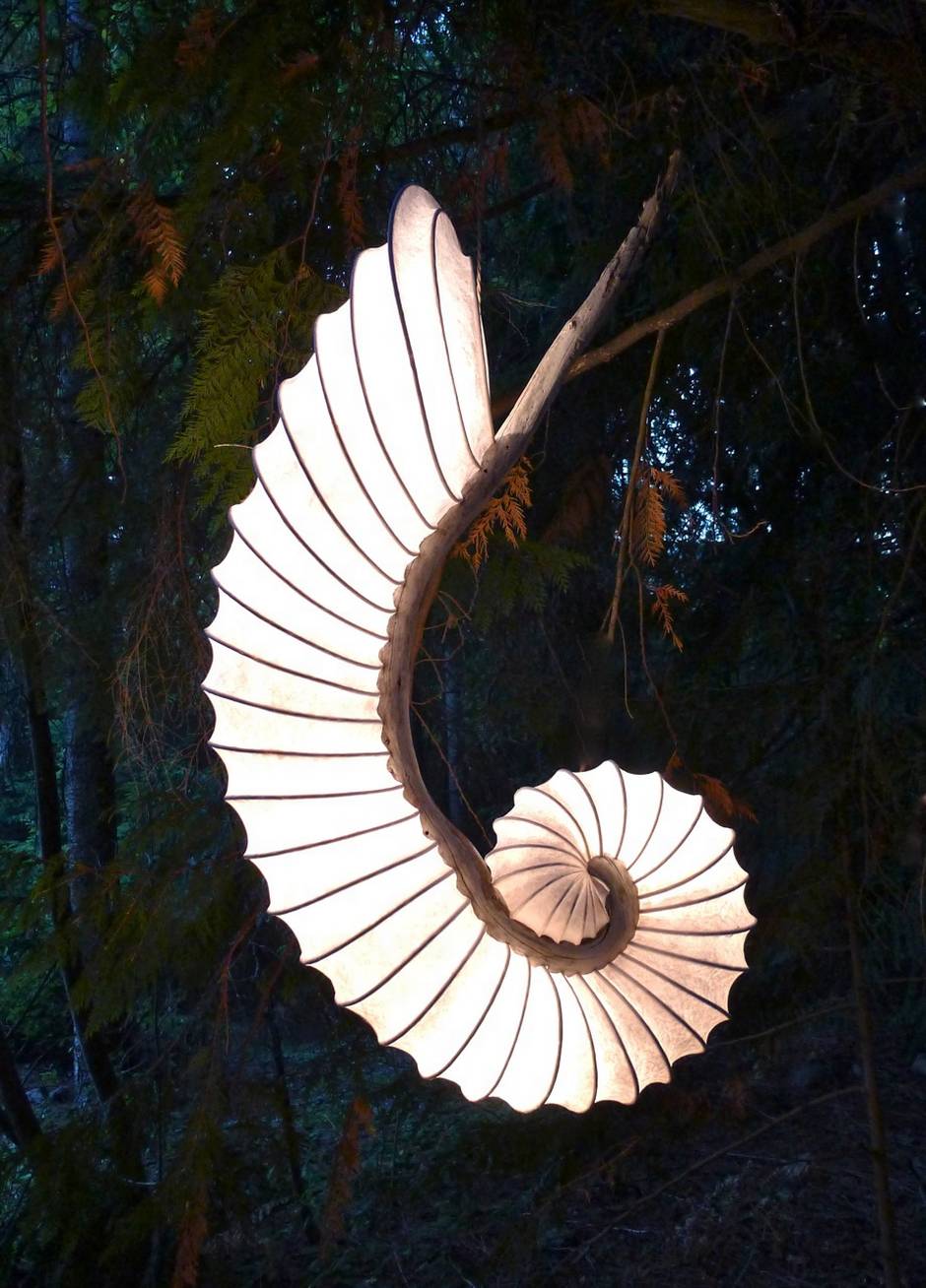 Just like his beguiling, organically sculptural lighting installations seem to undergo a metamorphosis, so too has Nelson, B.C. designer, Cameron Mathieson of Lightness, experienced a life-changing catharsis. When he was studying photography at the Banff Centre in 1977, he was involved in a climbing accident in which his friend perished. Mathieson began visiting Duncan Lake in the Kootenays for soul-searching inspiration. “I discovered a boneyard of windswept driftwood that I rescue by canoe several times a year.” Seeing anthropomorphic characteristics in the silvered wood, Mathieson transforms them with the addition of Japanese paper, pulp and resin over weeks and months of detailed labour. 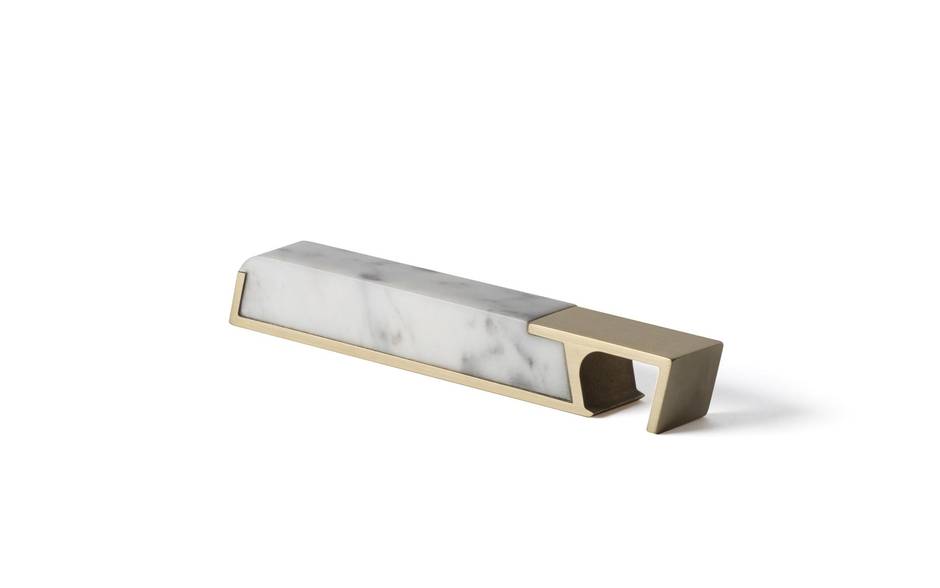 Industrial designer, Andrew Perkins of Fire Road in San Francisco is a man on a mission to bring new life to iconic and irreplaceable objects. His Profile Bottle Opener is so sleek, it’s as refreshing as the beverages it opens. The silky surface and substantial weight of polished Carrara marble feels cool in the hand and the rich anodized brass and silver frame form a durable gadget for every kitchen.

Fire Road’s Edge Dominoes is a twist on the classic game that still retains the original number patterns, but resembles computer chips in Perkins’ design. Travel-sized and light-weight, the set is made from durable aluminum with a black anodized matte finish and laser-engraved, everlasting number patterns onto the tiles. Comes in its own wooden box.

The award-winning Bloom Furniture Collection from mth woodworks, literally brings the outdoors, indoors. Designed and hand-crafted by Michael Thomas Host in Vancouver, he only uses salvaged cedar from B.C. rainforests after an area has been logged. It must be in his DNA (he’s the son of a forester,) as he showcases the growth rings of tree stump slices, left raw but sanded and encased in a mould made of resin from peanuts and soy. His Bloom art in the boudoir looks uncannily like Rorschach inkblots that must instigate lots of pillow talk.

IDS-Vancouver runs Sept. 22 to 25 at the Vancouver Convention Centre.