Requests for bubblegum pink walls, doggie shower stations, a helipad and roof-top hot tub are all part of the luxe life for celebrity on-location home rentals

When Calgary-based film production co-ordinator, Kim Goddard-Rains was asked to scout 25 luxury properties from which character, Hugh Glass, aka Leonardo DiCapprio, shooting The Revenant in Calgary, would select accommodation, she worked day and night from a long list of requirements. “It’s an incredible amount of legwork to find appropriate homes that have at least 7 bedrooms and bathrooms, a pool, gourmet kitchen, in-home theatre, gym and above all, great security,” says Goddard-Rains. “I actually created spreadsheets and videos of prospective homes – one with a helipad – eventually deemed unnecessary. Keep in mind that A-listers bring their own security people, a chef, trainer and often friends and family so if they are shooting for several months, they prefer the comforts of a home rather than living in a hotel.” 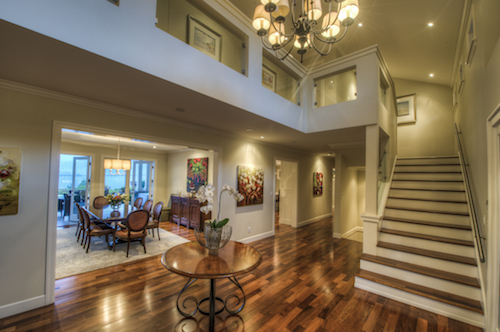 Some celebrities are so attached to their own furniture that they actually bring it with them. Such was the case with director, Tim Burton and wife, actress Helena Bonham Carter when he was shooting his film Big Eyes starring Amy Adams and Christoph Waltz, in Vancouver last year.

“They rented a beautiful 7,000 sq.ft. home right on the water in North Shore’s, Deep Cove,” says amicable rental manager, Chad Kalyn, of UNIQUE Accommodations in North Vancouver. The real estate company ingeniously parlayed their expertise into a sideline, catering to the demand for luxury rental homes and condos for the film business, and is the largest resource of its kind in Western Canada.

“Tim Burton shipped in works of art, some of their own furniture and drapes during their stay. It may sound unusual when the production company is paying up to $50,000 a month to rent them a furnished luxury 4 -bedroom + Den, 6- bathroom home, but when celebrities stay for three and a half months with their kids, and a nanny, they often pay extra to literally have the comforts from their permanent homes with them on location. In fact, shipping in their own bed, pillows and linens is very common,” assures Kalyn.

The Deep Cove open concept home boasts dark hardwood floors throughout; a large gourmet kitchen with stainless steel appliances, Carrera marble island and separate pantry with wet bar. Bonham Carter used the comfortable den as an office. French doors off the master suite open to a terrace overlooking the ocean. An expansive stone exterior terrace for entertaining leads to the pool with stunning views of the fiord and Indian Arm.

But after 10 years in the business, Kalyn hardly seems surprised at some of the more unusual requests made by celebrities. 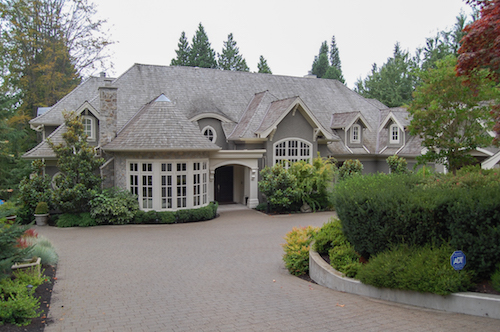 “Ashley Judd actually called us directly asking for a house that would accommodate her five cats and two dogs, and that was really a challenge,” admits the diplomatic Kalyn. “Not only that, but she wanted doggie shower stations- a trend in LA that is taken for granted in private residences there but not yet here in Canada. We ended up having to use a doggie daycare service, because while home owners are very obliging to accommodate celebrities and a pet- 7 was really pushing it.”

According to Kalyn, when Kelly Osbourne asked to have the walls of her rental home in Vancouver painted bubble-gum pink, the owners refused. As did the owners of a beautiful home in West Vancouver when Channing Tatum and wife, Jenna Dewan -Tatum (she was in town shooting Witches of East End this past summer,) requested a fence and more trees planted around the 13,000 sq.ft. property for more security.

While filming The Interview, Vancouver-born Seth Rogen doesn’t stay with his parents when shooting in Vancouver. “He opts to rent a condo and have his whole cast with wives and girlfriends stay on the same floor,” says Kalyn. “But buddy, James Franco chose to stay in a hotel.” 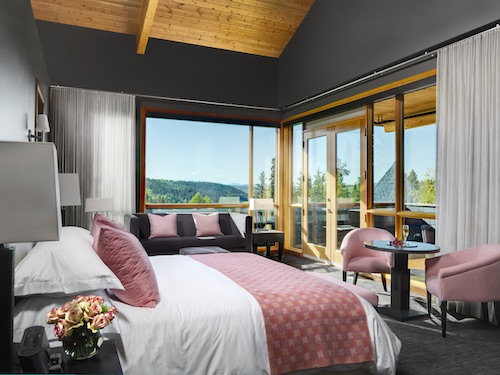 “I’m delighted to hear that actor Kevin Costner stayed in the Rhodochrosite Suite – and his masculinity was not threatened by the luxurious pink and grey silk fabrics,” chuckles interior designer, James McIntyre, of James McIntyre Design Corporation. He created the resplendent interiors for Azuridge set atop the rolling foothills of Priddis, Alberta, about 30 minutes from Calgary. It was formerly a private home re-designed as an Estate Hotel by Simpson Roberts Architecture & Interior Design Inc. Constructed on 13 acres of scenic property, the isolated retreat with 13 custom-designed suites, is a popular hideaway for many celebrities. Steven Spielberg stays in the subdued Amethyst Suite when his daughter takes part in the showjumping at nearby Spruce Meadows.

“Because it was formerly a private estate, all the rooms and especially ensuites, are huge, with built-in or claw-foot tubs looking out to spectacular views. We wanted to keep that feeling of rich residential warmth and luxury throughout, says McIntyre. Every suite is named after a gemstone with the juxtaposition of sensuous textured fabrics and photographs of minerals. They in turn play-off the masculine wood-beamed ceilings and window frames and wonderful views so each guest feels totally immersed in nature.” 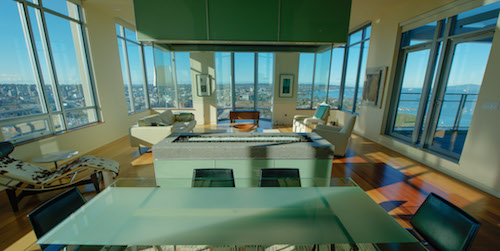 “Some celebrities choose luxury condos downtown to be near the action of a vibrant city,” says Chad Kalyn. John Cusack wanted a pied a terre with a fantastic terrace and Jeff Bridges an open concept, ultra modern penthouse condo with almost 320 degrees of panoramic views. Rental price tag: $20,000 per month.

But perhaps Oscar-winner, actor, Matthew McConaughey should receive kudos for the most original celebrity accommodation. He is known to drive to some movie locations and stay in his vintage 1930’s Airstream International CCD 28, with interiors he customized himself. After visiting the Squamish Nation in Vancouver he named it The Canoe because, as he told a reporter for Architectural Digest, “they presented me with a handcrafted oar that guides you through life.”

The down-to earth McConaughey, who shot his most recent film, Intersteller in Calgary last year, decided to forgo all luxury accommodation and just camped out with his wife and kids in two regular trailers supplied by the production company!