“With a million laughs, and color. And a lot of lights to make it sparkle. And songs-wonderful songs. And after we get the people in that hall, we’ve gotta start them in laughing right away… oh can’t you just see it?” (Judy Garland, Babes In Arms, 1939)

Rooney and Garland made it look so easy. Behind the scenes of today’s exclusive charity gala is like a Broadway show in the making- albeit a short run- planned as much as a year in advance. With sponsorship gleaned from industry and finance; room decor worthy of a Tony nomination; computer generated lighting and imagery; celebrities and entertainment galore; catering befitting royalty and ticket prices that may exceed $1500 a person, that’s what it takes to entice guests to dig deep into their pockets to raise millions for Canada’s non-profit charitable organizations.

Dancing along with Fred Astaire and Ginger Rogers to the big band sounds of the 16- piece Starlight Orchestra was a trip down memory lane for 450 guests Puttin On The Ritz, the theme of the 30th Annual Mistletoe Ball & Auction in December. The Ritz-Carlton Hotel in Toronto was the glam backdrop for the $1,000 a ticket Gala fundraiser for The Hospital for Sick Children’s Herbie Fund. Huge screens showing black and white movies of the 1930’s Hollywood dance duo, enticed guests dressed to the nines, onto the dance floor. Performances by The Sparklettes singing Andrews Sisters harmonies, tap dancers and a Cole Porter tribute, were just a few of the evening’s highlights. Vocalist and Juno nominee, Patti Janetta Baker and performer, Adrian Luces, both long-time volunteers for the annual event, produced the entertainment. 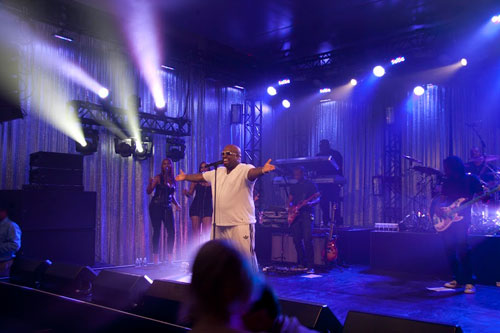 Working in the garage took on a whole new meaning when Mediaco, one of Canada’s largest audio/visual staging companies, transformed a 20,000 square foot luxury car showroom into a hip LA nightspot for the 7th Annual Brian Jessel BMW Charity Gala – CABRIOLET in Vancouver, last summer. The venue was the backdrop for 1,200 guests who paid $200 and $500. per ticket to see Grammy Award-winner and mentor-judge of NBC’s ‘The Voice’, CeeLo Green and The Goodie Mob perform. Sixteen food stations from Vancouver’s top restaurants, kept the crowd sated. 300 luxury prizes were donated in live and silent auctions including a Caya powered by TELUS suite for 14 to see Madonna perform in Vancouver.

“Most of our customers and the public who attend our annual charity event are in the 35 to 55 age range ,” explains BMW Managing Director, Jim Murray. “We brought in Jay Leno, a few years ago, who has an incredible personal luxury car collection. On his own, he started auctioning off trips to LA to see his collection and raised an extra $100,000 for charity!”

Says Vancouver society and events columnist, Catherine ‘Cat’ Barr ,“Although there is a core group of older philanthropists in Vancouver who support charities across the board, there is trending towards a younger 35 plus to get involved, but the venue has to be hip to attract them. Brian’s charity events certainly fit the bill.”

Do you have what it takes to become a culinary rock star? Hundreds of amateur foodies across Canada seem to think so. Chef’s Challenge: The Ultimate Battle For A Cure, is the brainchild of Joel Hock, President of Solutions With Impact. It was awarded ‘Best Event Produced for a Charity’, by the Canadian Event Industry in 2010 and has since raised $2.27 million for breast and ovarian cancer research and education at Mount Sinai Hospital, Toronto.

In order to even qualify, potential culinary gladiators must raise over $5,000 each before the event (only the top 50 fundraisers are matched with a celebrity chef- 10 participants to a team) while 750 must raise $2500 each just to sit in the audience to cheer them on! They are all fed later (not to the lions) but on meals prepared during the competition. 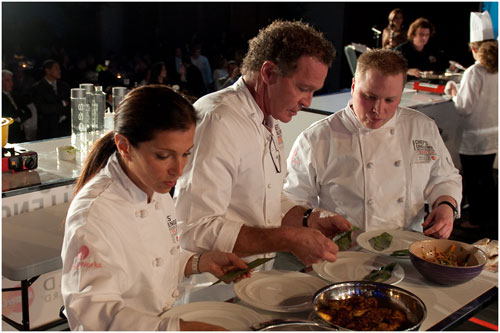 On December 1, The Fairmont Royal York, Toronto will stand in for the Roman Coliseum. Inside, a spectacular ‘kitchen stadium’ set has been erected. Executive Chef and entrepreneur Mark McEwan, The McEwan Group, who led his team to victory last year, will do battle against fellow celebrity chefs Michael Smith, David Rocco, Lynn Crawford and Chuck Hughes and their pre-selected teams. Bob Blumer will MC and laid-back California dude, Guy Fieri host of ‘Diners, Drive-ins & Dives’ creates the menu.

“Crazy, crazy,” says McEwan, of the pressure on set. ”I try to distill all the recipes down with my team earlier that morning, assigning each part of the menu. When those lights go up, they look at their neighbour and they’re like deer in the headlights- they forget everything! Lots of burns and knife cuts too. I’m like an angel in their ear, pressing them onwards. Last year the other celebrity chefs accused me of being too competitive- but we won!”
Sipping champagne in Café Momus on the streets of 18th century Paris, was a decadent experience for 380 elegantly attired guests of Opera Calgary’s 40th Anniversary Opera Gala, that took place in the Jubilee Auditorium last April. Opera buffs paid $500 each (corporate tables $10,000) for Dinner On The Set of this season’s elaborate production of Puccini’s La Boheme. Serenaded by costumed performers from the Emerging Artist Development Program during cocktails, guests could mingle and pose for photos on the set’s towering staircase amid a backdrop of glittering stars. Then, they were whisked off to a five course French- inspired dinner created by Devour Catering in the Jubilee lobby, hosted by CBC-Radio personality, David Gray. Returning later on stage for dessert, guests found themselves on yet another set: the stark snow -covered parkette where the evening before, Mimi and Adolpho said their final good-byes.

“Dinner On The Set is such a winner for us,” says Calgary Opera’s General Director and CEO, Bob McPhee. “Following the final performance, instead of striking the set, we leave it up for our Gala the next night. We’ve been doing this ‘behind the scenes’ Gala fund-raiser for 20 years now and it’s such a unique experience for our guests because every season the opera changes. It re-generates itself and it’s always innovative. We’ve done this with Aida, Carmen and next season, La Traviata. This year it raised $310,000 for Calgary Opera and the Emerging Artist Development Program.” 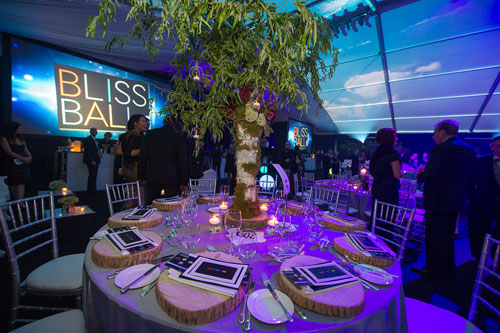 Imagine dining beneath a tent surrounded by incredible sound and stroboscopic lighting effects of shooting stars, rolling clouds and blooming flowers. This is not a futuristic camping trip but The Innovation Dome- the largest ultra-wide canvas projection in Canada, created recently for The Bliss Ball, at historic Fort York Toronto. Co-Chaired by Shinan Govani, social columnist for the National Post,
the event marked the 10th Anniversary of the Dilawri Foundation in Philanthropy in Canada. Their extraordinary donation of $7 million was dedicated to the
Patients, Populations and Policy Department and Patient Amenities Fund of the Hospital for Sick Children.

“It took about 50 hours over three days just to erect the 150 X 80-foot tent, blend the interactive projections and twenty people working lighting and audio boards behind the scenes,” explains Scott Duffy, project manager, Westbury National Show Systems Ltd. “The super high-definition projections create a unique, customizable environment and it was quite a mathematical science to create it.”

And those weren’t the only stars that the $1500. a -ticket guests enjoyed under the Dome. Oscar and Grammy Award – winner, Jennifer Hudson performed; actor Martin Sheen was the surprise auctioneer of the evening and celebrated chef, Mark McEwan served up ahi tuna, beef tenderloin and an apple crostata for 500. 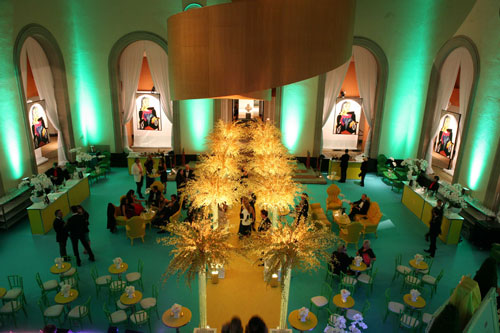 “Give me a museum and I’ll fill it,” Pablo Picasso once said.
Jeffry Roick, of McNabb Roick Events in Toronto wanted to create a visually stunning atmosphere for the Art Gallery of Ontario’s April fete, Picasso, that would be as provocative to the 320 guests who had paid $1500. a ticket, as Picasso’s paintings were to an incredulous 19th century Paris. Working closely with his colleague, Jim Edwards, San Remo Florists, they created a French salon theme in the Gehry-designed Walker Court. This was achieved by juxtaposing bright yellows and greens with ‘Daliesque’ furniture, pathways of towering yellow sprays of oncidium orchids, blue hydrangeas and mammoth potted white orchids. Prints of Picasso’s ‘Portrait de Dora Maar’ hung in alcoves but during the cocktail hour, live nude models posed for sketching artists from The Ontario College of Art & Design.

“I stood at the back to see if this very sophisticated audience of donors and guests was shocked,” said Roick. “One of the doyennes came up to me (she has her name on one of the galleries in the AGO) and said ‘it was the most beautiful, magical event she had ever attended!’ ”

For the Spanish-French inspired dinner in Baillie Court, guests sat under springtime in Paris canopies of exquisite pink cherry blossom branches, 75 in each under-lit vase. “We spent two weeks battling with Mother Nature, forcing them to bloom at just the right time for this Gala,” said Edwards. Picasso would have approved.