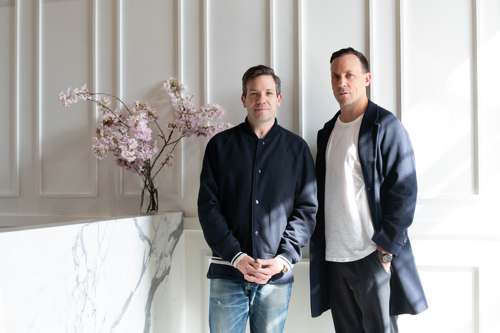 As soon as one walks in the door, a roaring jet (albeit a floor-to-ceiling video,) takes off to parts unknown. Faceless travellers disguised as sculptures throughout the store, appear to be frozen in activity like the aftermath of Pompeii. Tropical bird calls fill the air beckoning consumers to expansive sliding glass windows overlooking the North Shore mountains and giving the illusion of standing on the balcony of a cruise ship.

The implicit message of Herschel Supply’s new 5,000-square-foot Gastown store – their first company-owned in the world and designated North American flagship, is subtly enticing: get out there and explore and do it with style!

“We wanted the space to be the ultimate destination to showcase our products and culture and I think it’s a testament to how much we care about detail,” explains co-founder and managing director, Lyndon Cormack. “We always look for locations in cities where both tourists and locals unite and our offices are nearby in Railtown.” 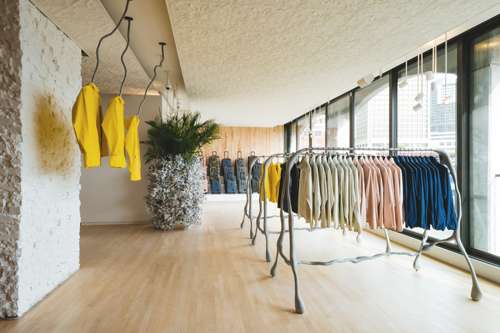 The effusive Cormack is one half of a sibling partnership with brother Jaimie that began almost ten years ago. The brand takes its moniker  from the rural town of Herschel, Saskatchewan where three generations of Cormacks grew up although the brothers were raised in Calgary. Before founding Herschel Supply Co. both cut their chops working for lifestyle brands: Lyndon for skateboarding shoe company Vans and Jaimie for K2 Sports in Washington State.

Their design for a retro-style backpack with a rounded top and square pocket in front filled a gap in the market: mid-price affordable, no fancy do-dads dangling from zippers – just hipster cool.

Today Herschel Supply has 45 franchised stores and product distribution that operates globally in 70 countries (many in Asia) as well as in Europe, South America and Mexico.

“When we started the company in 2009 it was with our own cash so we just plugged away and did everything ourselves,” reminisces Cormack from the new space. “Now, with a large staff we divide our responsibilities; Jaimie on the production and distribution side and me in marketing and online sales but we’re very collaborative with everything.”

Do the brothers who live just a few blocks away from one another in Deep Cove, ever argue? 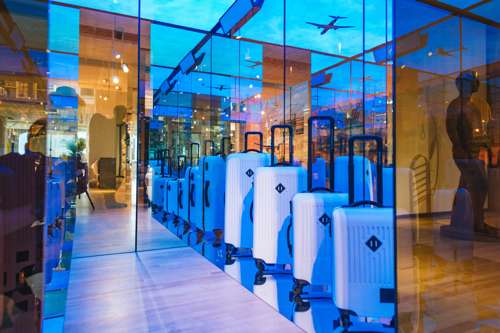 “Well, we agree a hell of a lot more than we disagree,” laughs Cormack. “But there’s no candy-coating so it can be tough. But ultimately our goals are the same. There’s no ego competition here. What we do share are our marketing voices and by that I mean what kinds of stories do we want to tell with our products.”

“We decided really early to keep the reins tight on a lifestyle brand that we think is fun, entertaining and inspirational,” says Cormack. “From day one Jamie and I wanted to be famous for something. There are so many brands out there that do a lot of things but our preference was how do we become known for one thing?  We knew that if we had that as our anchor we could build from there.”

Designed by Vancouver’s Omer Arbel the store integrates art, architecture and tech as an inviting backdrop from which to explore the product lines. “I’ve always been so inspired by Omer’s architectural lighting at BOCCI and his whole take on how interesting concepts can tell a beautiful story,” Cormack relates.

“We wanted a sort of New York apartment vibe with brick that looks like it’s be painted 500 times, where people have come and gone. It’s a heritage building with very strict rules about altering interiors but we love the juxtaposition of old and new like the original tin ceilings and wood flooring.” 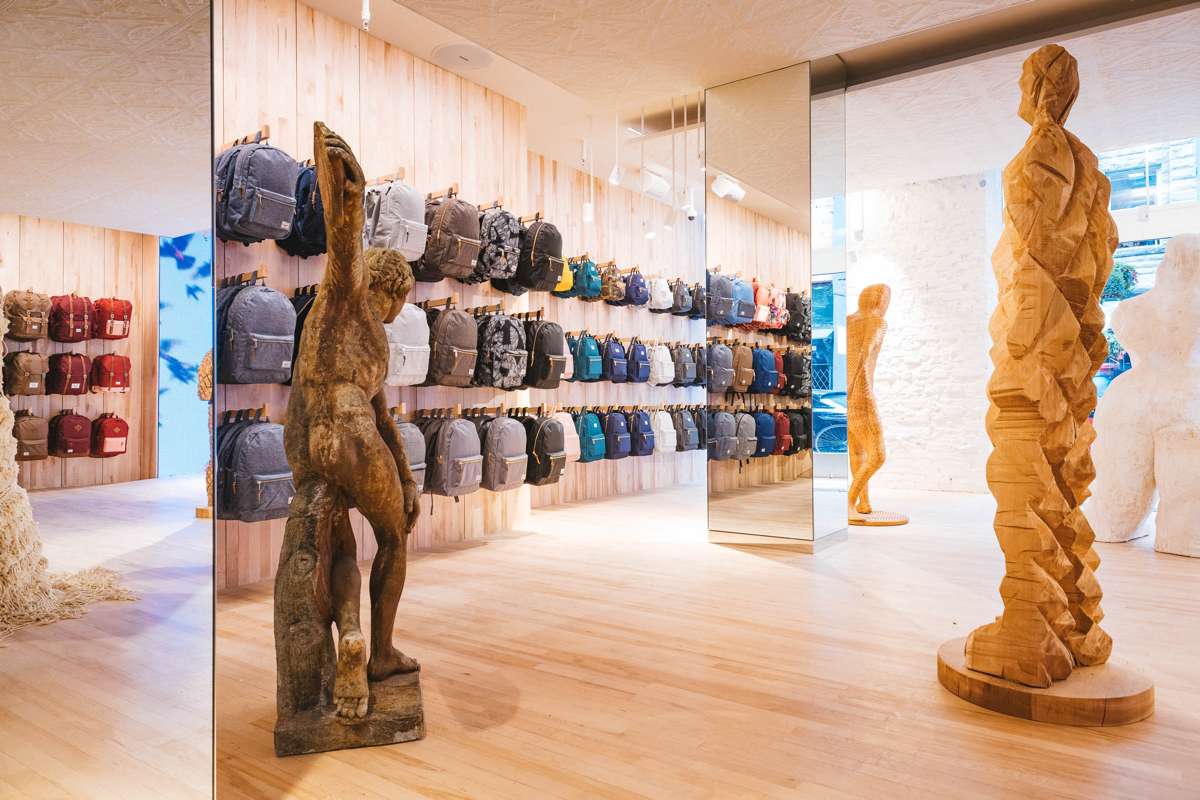 Design-driven even applies to the cashier’s desk in the centre of the store. Composed of wildly overgrown bleached coral, perhaps an environmental statement, it’s sculpted aluminum created by Arbel. And an infinity room surrounded by wall-to-wall mirrors projects a parallel universe of colourful products while two pink and grey marble change rooms seem almost spa-like in their layout.

Synonymous with backpacks and travel accessories, Herschel has recently moved into rainwear apparel and hard and soft-shell travel luggage, the latter with built-in USB charging ports. Fabrics are always vintage -inspired but with a contemporary twist. The partners love working with fabric companies like legendary Liberty of London and Hoffman California Fabrics in Los Angeles. Hoffman brought a retro-surf vibe in neon colours to Herschel’s duffel bags, wallets, hats and outerwear for several 2018 Collections. Hoffman’s abstract florals continue into Winter 2018/2019. Army camouflage patterns that have remained popular with consumers over the years have now been deployed to hard-shell luggage. Corduroy makes a fashion re-visit this year with Herschel Supply translating the look into backpacks and waist bags (aka fanny packs.)

They’ve also collaborated with Disney, Coca Cola and Japanese brand, Beauty & Youth and recently with Hudson’s Bay Company and their iconic stripes as well as the NBA and Major League Baseball branding.

“More will be announced in 2019 for our 10thanniversary and we’re really excited about that,” says Cormack.

“You know when we started, nobody knew who we were – we could barely get a call back from manufacturers,” Cormack confides. “Now we’re welcomed with open arms because I guess we’ve proven ourselves.” 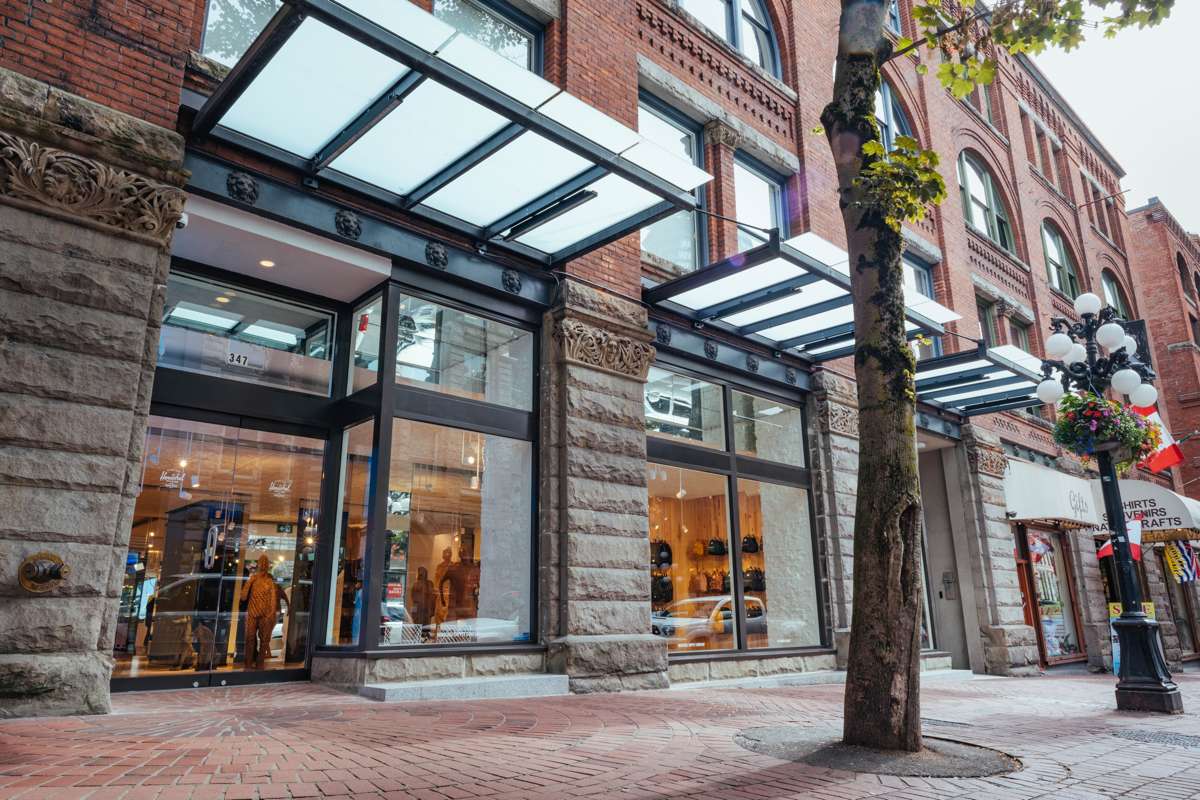