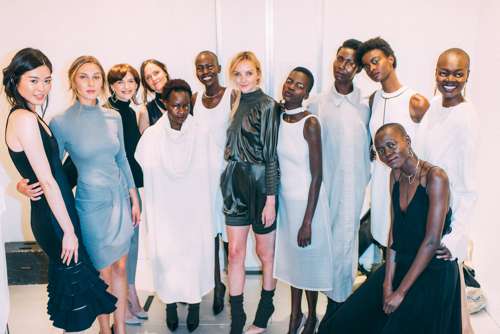 Surrounded by the world’s top South Sudanese models, many of whom fled their native civil war – ravaged country as refugees, Calgary-born supermodel, Heather Marks reflects on her own good fortune to grow-up in Canada.

“This is really an amazing experience for me as I haven’t worked together with the Sudanese girls before so I’m learning more and more about their difficult lives in that part of the world as we spend time together backstage,” confides Marks. “Living in Canada, we take water for granted and living without it seems unthinkable.”

The lithe, 5-foot 11-inch sprite with those trademark eyes like luminous blue-grey pools, jumped at the opportunity to Walk For Water when Canadian fashion designer (and fellow Albertan,) Treana Peake invited her to take part in her Obakki Foundation fashion show/fundraiser at Holt Renfrew, Vancouver. 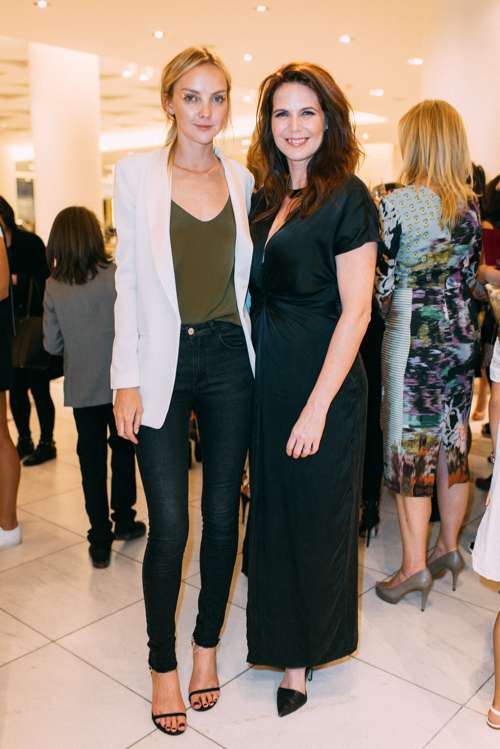 In 2009 with $500,000 in seed money from the rock group Nickelback (Peake’s husband, Ryan Peake is lead guitarist,) she created the charitable Obakki Foundation focusing on the building of wells in South Sudan, the poorest country in the world, with tribal wars constantly fought over water and access to wells. Since its inception, the Foundation has built 810 wells and brought clean water to over a million people. Despite its dangers, Peake travels to the country with her small team of women and a UN representative, several times a year.

“This show has been 7 years in the making, and it’s incredible to get Heather and all the Somali models finally together in one place,” says an exuberant

Dressed in the requisite black leather moto jacket, and ripped jeans on impossibly long legs, Marks is reminiscing about her tomboy beginnings when she won a contest and was scouted as a 12-year-old at the Convention Centre for The Calgary Women’s Show. At 14, Canada’s Flare Magazine was her first big job before she moved to New York and her career took off internationally.

“At first I travelled with my Mom to shoots and to learn the ropes – I was pretty naïve,” Marks laughs, “ although I had been to England many times as a kid because that’s where my parents are from.  By 15, I was flying to Paris on my own and doing 98 runway shows a year!  (That included walking the catwalk for fashion houses Givenchy, Yves Saint Laurent , Louis Vuitton, Chanel to Marc Jacobs and wearing the wings for Victoria’s Secret.) There’s really a wonderful sisterhood of models who just take the younger girls under their wings and 14 years later – I’m almost 28 – I’m doing the same for the new girls starting out,” Marks explains.

“I’ve really transitioned a long time ago from runway shows to doing mostly editorial bookings but I’ll do some special charitable shows like Treana’s a couple of times a year. I love mixing fashion for a great cause.”

Marks’ ethereal look is sought after for campaigns with Dolce & Gabbana, Giorgio Armani, Jimmy Choo, Revlon, Nars and Anna Sui, amongst others — and hundreds of magazine covers, most recently for Glamour Germany and Glamour Italia.

When she’s not travelling for bookings, Marks has a Greenwich Village apartment in New York that she shares with Otis, her bulldog. Marks tries to get back to her hometown often, meeting up with Calgary designer and pal, Paul Hardy or most recently attending the 2016 Juno Awards that took place at the Scotiabank Saddledome in April. She has a “cottage on Shuswap Lake, in the B.C. interior where I go to chill out with my family and friends.”

I ask Marks about a model’s longevity and if she has any business aspirations like supermodel, Giselle Bündchen. Now 35, she like Marks, began her whirlwind career at age 14 as a gangly tomboy from Brazil, and is now according to Forbes Magazine, overseeing a business empire in excess of $300 million.

“You know, today with models working into their 40s and 50s it’s great to know I have lots of time to decide what I want to do. Canadian models are doing so well and always in demand because we’re smart, polite and low maintenance,” jokes Marks. “I’m really into fitness especially Pilates and may do something with that. Modeling allows me to build great connections for whatever I decide to do in the future.”