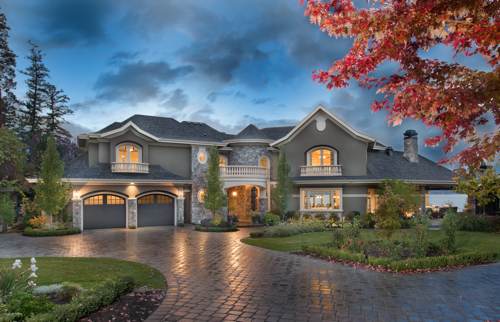 “I remember growing up in Kelowna and waterskiing past this same beautiful beach in the Lower Mission, and looking up and seeing where the property rolls down to the lake,” reminisces designer, Carl Scholl of Carl Scholl Design. “So when the owners, Lawrence and Patricia Rychjohn explained to me that they wanted a traditional design, upscale and comfortable, I immediately thought of the wonderful homes built in the American Hamptons, for their lakeside retreat.”

Assiduously overseen by Heirloom Custom Homes site manager, Brian Chomyscyn, the 8,000 sq. ft. home with Kettle Valley stone walls and stucco exterior, weathered grey (fiberglass) shingle-roof and situated on two acres of prime waterfront property, took nearly three years to complete. That necessitated the owners to live in the luxuriously appointed post and beam Carriage House with loft they had built previously on their property. It later became a guesthouse connected to the main home by a covered breezeway. 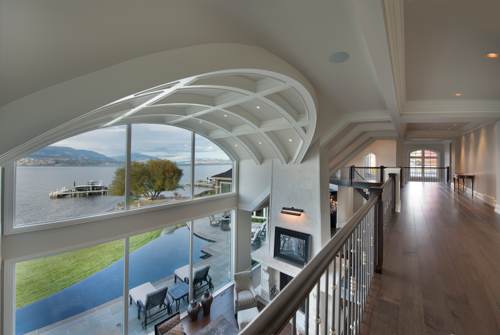 Irregular rooflines, charming oval criss-crossed windows, even a stone turret (harbouring the interior spiral staircase,) were all incorporated into the elegant design of the classic Hamptons home.

(Heirloom Custom Homes has since been awarded a Silver in the 2014 Tommie Awards Design Category for the Rychjohn home.)

As in true American Hamptons style, the interiors reflect a neutral palette of white walls offset by wood. 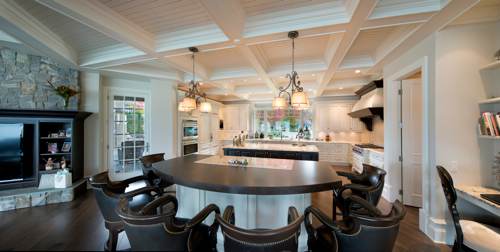 In this case, custom alder wood floors using 8”- wide boards throughout the open plan, were stained ebony then slightly distressed and sanded off. Says interior designer, Lynn Archibald of Lynn Archibald Interiors, Kelowna, “I worked with the most amazing finishing carpenter, Robert Dejong (Dejong & Sons Construction Inc., Kelowna.) He brought drama into the Rychjohns’ home with his incredible arched and coffered ceilings, detailed wainscoting and spiral staircase leading to the second floor mezzanine.”

Like Michelangelo lying on his back atop scaffolding to paint the Sistine Chapel ceiling, Dejong and his sons, Ben, Aaron and Jeremy, had to construct staging 23 feet high and 20 feet wide as well as a false floor, to implement his extremely complicated design over the sunken living room above the immense arched window. “Known as a ‘radius ceiling’ in which a compound curve is bowed – in this case – towards the lake – we actually start working from the centre of the ceiling outwards continuing from left to right to determine the angles,” explains Dejong. It took a month to construct. 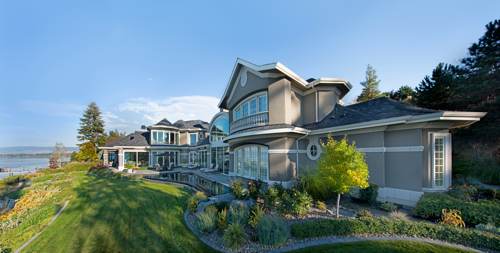 The ceiling over the sunken formal dining room is another tour de force by Dejong simulating false beams sloping down to 60 feet of wall -to -wall glass overlooking Okanagan Lake. “Hanging that exquisite crystal Schonbek chandelier was a feat in itself, “ laughs Archibald.

Viewed from the upper hall mezzanine, one feels like they are looking out over the ocean (or lake) from The Sydney Opera House!

The board and batten vaulted ceiling above the family room also proved a creative challenge for Dejong because of the home’s open plan and 8-ft. peak. The perspective had to meet at exactly the correct angles with both the coffered ceiling in the kitchen and above the informal dining room area. Once again he designed and built intersecting false beams to balance the continuity of those on the ceiling at the other side of the home.

“The striking spiral staircase in the foyer leading to the second floor mezzanine, in-home theatre and guest bedrooms, is another tribute to Dejong’s talents,” enthuses Archibald. “To add a Baroque touch to the solid steel spindles, he assembled 202 ‘knuckles’ at different heights, that resemble beautiful beaded bracelets made of solid nickel. “

Says Dejong, “ I knew that Lawrence didn’t want a cookie cutter design for their home. He really wanted something different. What they did get was a ‘WOW’ element when you step inside the front door. That comes from the synergy of many really creative people working together on this build.”