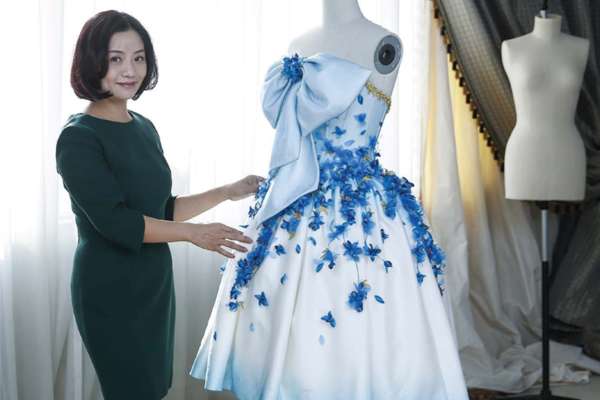 When popstar Rihanna wore a spectacular imperial yellow 24-karat-gold- embroidered silk cape that trailed 16-feet behind her as she slowly walked up the steps of the Metropolitan Museum of Art in New York for the 2015 Met Ball Gala, the photos were splashed around the world. The theme was China: Through the Looking Glass and Rihanna had searched the Internet to wear a Chinese designer.  “I received an email from her and I really didn’t know who she was,” laughs couturier, Guo Pei, in Vancouver for the opening of her Exhibition, Couture Beyond, running until January 20th, 2019 at the Vancouver Art Gallery.

Although Rihanna wanted to purchase the gown and cape that took 50,000 hours to construct over two years, Pei wouldn’t sell them but lent the ensemble to the singer for that occasion. “I was a bit worried because the cape weighed 55-pounds and I didn’t know how she was going to walk in it!” Pei said.

It was a Guo Pei moment and a game-changer for her. Until then, China was known as a manufacturing monolith but not for its couture. Pei was already an insular fashion star in China, and suddenly the Western world knew her name. In 2008, she had been commissioned to create the spectacular costumes for the opening ceremonies at the Beijing Summer Olympics and a gown covered in 200,000 Swarovski crystals for opera singer, Song Zuying who performed there with Placido Domingo. 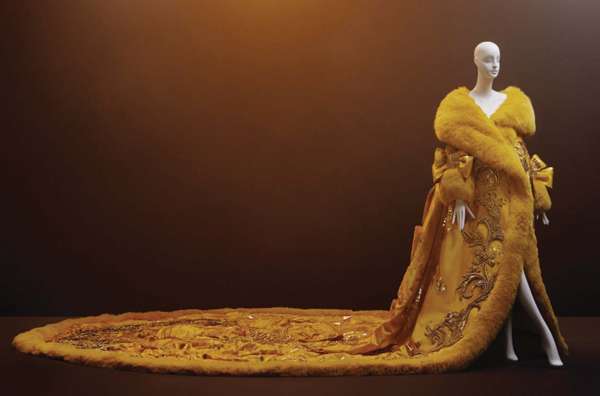 Fast-forward to 2018. The diminutive dynamo and mother of two daughters has the audience at the Vancouver Art Gallery in the palm of her hand. She’s unpretentious and vivacious and her responses are punctuated by girlish giggles that belie an indomitable drive to succeed by her own rules.

The Vancouver Art Gallery’s Canadian premiere of Guo Pei: Couture Beyond sets the stage with 40 of her dazzling contemporary creations. Walking through the Exhibition, one feels just like Alice In Wonderland entering an opulent fantasy world that becomes “curiouser and curiouser.”

Many of those avant-garde creations trace Pei’s imaginative aesthetic over a ten-year period integrating mythical Chinese motifs and abstract astrological signs with more recent Western-inspired garments like those imprinted with paintings from her visit to Switzerland’s Cathedral of Saint Gallen. Blessed with a photographic memory, her sketches, also on display, are works of art in themselves, illuminating the tiniest of details.

A blue and white hand-painted tiered silk gown that mimics a pleated fan in its draping is from Pei’s One Thousand and Two Nights Collection. Embellished with thousands of Swarovski crystals, the headpiece has been constructed in porcelain ornamented with crystals and tassels. And of course, the iconic silk and fur cloak hand-embroidered with metal and 24-karat gold-spun thread worn by Rihanna, is a show-stopper.

“After Rihanna wore the cape and gown and it received world-wide attention, some people urged me to make changes in my designs for a Western market and I said no, I’m not going to do that,” Pei confides.

Pei grew up during the ‘60s and Mao’s Cultural Revolution in China when the only attire were the dull grey uniforms of conformity. “One of my earliest memories at the age of two is of my grandmother telling me stories and fairy tales about the beautiful colours, exquisitely embroidered flowers and butterflies on silk fabrics during the last Imperial (Quing) Dynasty when she was born,” she explains in Mandarin through an interpreter. “Those sewing traditions were completely lost as were any kind of embellishments. “In fact,” she continues, “peasants were banned from wearing yellow or gold because they were reserved only for the ruling class.” 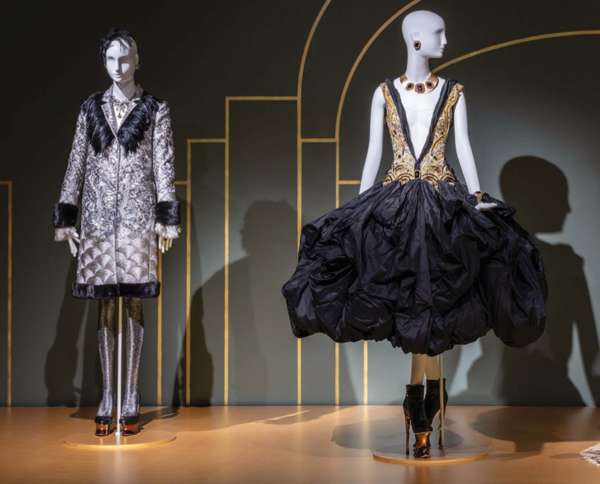 The seeds planted in Pei’s mind as a small child were captured in the doc and its title, Yellow Is Forbidden directed by Pietra Brettkelly and shown at the Vancouver International Film Festival just days prior to Pei’s VAG Exhibition opening. It traces her early influences, including her visually impaired mother who taught her to sew and draw at the age of two; Pei rising to fame in China and conquering entry into Paris’ elitist Chambre de la Haute Couture. The latter invitation entitled Pei to mount her extravagant 2017 Collection during Paris Couture Week where she chose the soaring medieval arches at La Conciergerie to stage her runway show. It’s the atmospheric 14th Century palace where Marie Antoinette awaited the guillotine. And speaking of losing one’s head, models wore such heavy, bejeweled head pieces and high, gem encrusted footwear that they were in constant danger of toppling over as they made their way down the catwalk!

In 2017, TIME magazine named her one of their top 100 influential people.

Pei was a member of the first class to graduate from the Beijing School of Light Industrial Design. She began creating ready-to-wear for a manufacturer that churned out 1000 pieces a year but knew that wasn’t what she really wanted to do. She met her husband, business partner, and investor, Jack Tsao while searching for fabrics. “I come from a textile family that goes back three generations,” says Tsao who speaks English and travels everywhere with Pei.  She decided to open her own atelier, Rose Studio in 1997 to concentrate on couture gowns that range in price from $350,000 to a staggering $750,000.

“That’s my heart’s passion,” admits Pei, “but it was really difficult finding the skilled craftsmen and embroiderers because it was considered a really bad skill during the Cultural Revolution. I travelled to Hubei Province in the countryside literally looking in windows at embroidered curtains trying to track down embroiderers who had worked for the Royal Family.” Pei ended up training 500 embroiderers herself.

“I create all my pieces from my heart,” admits Pei. “It’s how I express my emotions. You know, the life of fashion is so brief and then it’s discarded. That’s why, if my work can be seen in museums in 200, even 500 years, I’ve really accomplished something.”