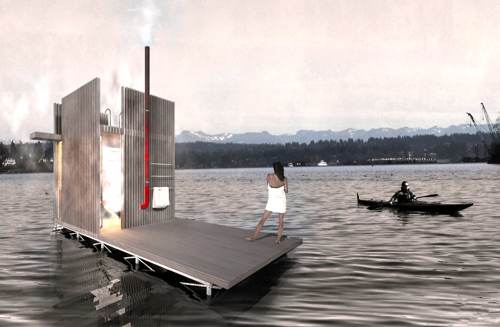 The steam sauna, or shvitz (Yiddish meaning to sweat) in North America has always had a less than pristine reputation: big hairy men with small towels. Now we pay big bucks to sit in expensive spas in which crystals may give us a mystical experience. Perhaps more palatable is the homey image in Finland where Nordic families realized as early as the 16th Century, that the best way to endure subzero temperatures with a semblance of good hygiene and build up the body’s resistance to disease, was in the sauna. In fact, before modern heath care, most Finnish mothers gave birth in the sauna. Today, in a country with about 5.5 million people, there are more than 2 million saunas. Even major business decisions are made there – not in the boardroom. Every household has their own simply constructed sauna usually using well -dried birch wood in a metal stove with stones on top, onto which water is thrown to make steam. Proximity to cold water is crucial because after the body sweats out the toxins, a plunge in the lake is not only refreshing, but closes the pores. 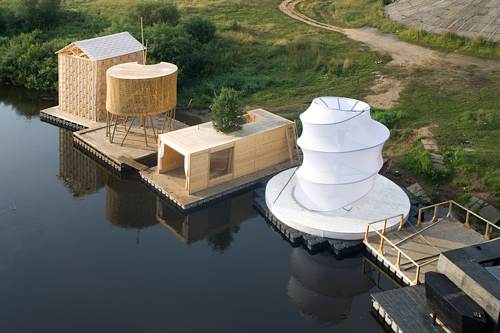 Seattle’s goCstudio Architecture + Design took the sauna plus proximity to cold water seriously: “We wanted to design something fun and recreational on Lake Union in Seattle, that people can get to by kayak and canoe,” says architect, Aimee O’Carroll. In 2012, she and partner, architect Jon Gentry, placed 2nd in the 2012 International Design Ideas Competition with their re-imagining of Lake Washington’s 520 Floating Bridge, and that sparked their interest in floating saunas. Last year, with the help of Kickstarter, their design was fully funded to the tune of $43,725 and is being constructed this July 2015 and officially towed out and anchored in place for use in August. “People will be able to book it on-line and the sauna will be towed back to a marina for cleaning each night,” says O’Carroll. “But you have to bring your own towel,” she laughs.

Accommodating up to 6 people, Seattle’s goCstudio Architecture + Design’s floating sauna’s cedar siding exterior is constructed on a 70-ft. timber footprint and aluminum frame with mooring for kayaks or canoes. 55-gallon flotation barrels keep it buoyant. Equipped with steel towel racks and a ladder that leads up to a rooftop deck. Finnish company, Finnleo.com used Nordic white spruce for the interior and an efficient Finnish wood-burning sauna stove. 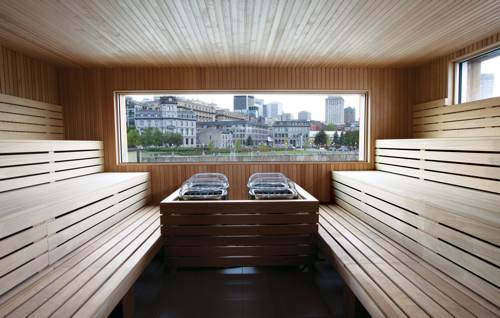 Why didn’t Noah think of this?

Russia’s Kaluga International Festival of Landscape Objects saw a flotilla of seaworthy wooden homes float down the Ugra River to Nikola-Lenivets Village. Among the visionary houses was a beautifully-crafted floating sauna, complete with a living pine tree growing through it and up to a rooftop deck! A dressing room with billowy curtains offers optional privacy. The sauna was designed by Sami Rintela and Dagur Eggertsson of Rintala Eggertsson Architects in Oslo, Norway. “In time the wood will become gray from river water and rain, and the sauna will have a lovely fragrance of tar and smoke,” says Rintala. The floating sauna and homes are rented out during the summer months.

An Urban Sauna that Floats Your Bota Bota

When Jean Pelland, principal at Sid Lee Architecture, Montreal was 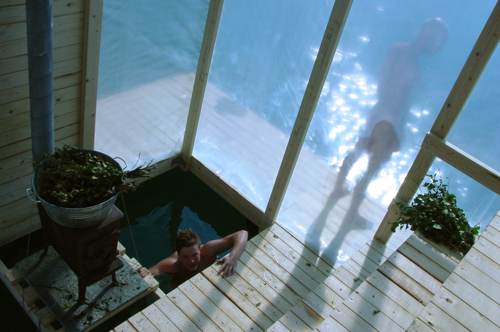 commissioned by the French Canadian Emond family to transform an old ferry, (later a showboat that once showcased performers like Ginette Reno,) into a floating spa, he wanted to capture a rare iconic view of Old Montreal and not just from the 650 integrated portholes.

Bota Bota floats in the St. Lawrence (tethered to a dock) and merges into the Lachine Canal. It’s designed like a very modern ocean liner with 25,000 sq feet on five levels. The almost panoramic view from the two saunas encompasses Habitat 67 and historical Old Montreal. “The two Finnish saunas on the highest level, have become a ritual for many people,” says Pelland. “Personally, I think it’s most beautiful in the winter – imagine having a sauna with this amazing clean, snowy view and just a gentle rocking on the waves.”