I am doing the backstroke in the Olympic-sized pool surrounded by palm and grapefruit trees as 20 stone Egyptian cats stoically spurt azure water in arcs above my head. Gazing up at the hotel’s soaring Turkish domes and minarets, I feel like a player on an MGM film set. Esther Williams, eat your heart out! But the luxurious Herods Palace is no garish Las Vegas knock-off. Instead, the hotel captures, through imaginative design and exquisite architectural detail, the history and geography of one of the most beautiful regions in the Middle East. Who is the conjurer, inspired by ancient legends, who took seven years to design and build the US$120-million resort here on Israel’s equivalent of the French Riviera, overlooking the Bay of Eilat, Aquaba, Jordan, Egypt and the Edom Mountains? Somewhat surprisingly, it was a Canadian, Joab Igra, who created and owns this magnificent homage to the past.

“I understood what Frank Lloyd Wright meant when he said, ‘God is in the details,’ ” says Igra, with a smile that conveys many sleepless nights spent researching the hotel’s eclectic design. 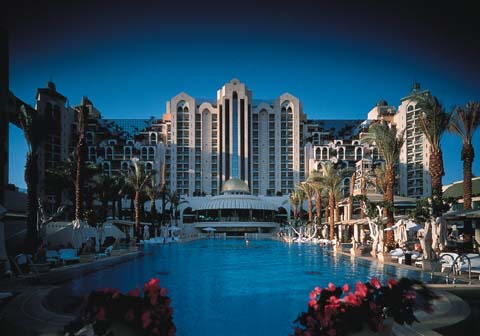 Igra studied design and architecture at the Ontario College of Art and Design and, in 1973, created Designer’s Walk in Toronto, the largest trade resource centre in the country to showcase Canadian and international fabrics, furniture and accessories. He moved to Eilat in 1987 with his Danish wife, Jeanette. There he began his quest to build Herods Palace where the desert meets the sea on the north shore and where two days of rain a year, even in the Promised Land, is a miracle.

The 300-room complex opened a year-and-a-half ago and has grown to include the Vitalis Spa, overseen by Jeanette, a champion triathlete. With the completion later this year of Herods Forum and Convention Centre situated on a man-made lagoon and connected to the palace by a striking glass bridge, Herods Resort Complex will be the largest in Israel, with 700 rooms and extensive amenities for the business traveller. It is managed in Israel by Sheraton Moriah Hotels and Resorts.

On a palace walkabout with Igra, I inquired how Herod – the ruthless King of Judea for 33 years; husband of 10 wives, executioner of his most beloved, Mariamme; driven mad by his guilt (translation: syphilis) — could have inspired such a magnificent hotel?

“I have always been fascinated with King Herod, because he was one of the greatest builders in history and influenced the architecture of many cultures including the Turks, Romans, Jews and Arabs,” Igra explains.

“He built the Temple in Jerusalem, Masada, and of course, Herod’s tribute to the Roman Emperor Augustus, the opulent port of Caesarea, a masterpiece of engineering with its aqueducts and amphitheatre. King Herod’s fascination with water included elaborate pools for bathing — did you know that the Romans never used them for swimming?”

Ancient ruins are intrinsic to Igra’s design. Often it is difficult to decipher if interiors were actually excavated or the creative genius of a talented local artisan. So much ornamental work and stone cutting was involved in the construction of the hotel that a workshop had to be organized on site. Portions of the floor in the magnificent natural pink-and-white stone lobby resemble elaborately distressed mosaics still partially embedded in marble.

The domed ceiling in the Four Winds Lounge, with its trompe d’oeil Rousseau-inspired aqua and gold foliage, is braced atop steel girders that project through the glass overlooking the pool. They are hand-painted to resemble ancient stalks of bamboo. The hundreds of Murano glass sconces and chandeliers suspended throughout the hotel and its North African Tamarind Restaurant are not antiquities but designed with historical accuracy by Igra and commissioned when he travelled to Italy. Beneath the lobby, the Salome Piano Bar resembles a subterranean Roman grotto, its ornate caramel-coloured friezes, crumbling walls and arches leading to 21st-century elevators and telephones.

Even the spacious guest rooms, each with a spectacular view of the sea, are decorated in ancient Moroccan and Turkish motifs, although much of the jewel-toned upholstery, drapery and carpeting throughout the hotel was imported from Toronto. 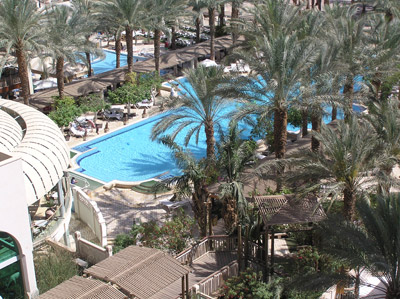 Israeli hotels are renowned for their elaborate buffet breakfasts and eating at Herods Palace is a sumptuous feast of indigenous cuisine. In the Tzaparim (Birdwatchers) main dining room we are transported into a Middle Eastern bazaar where “stalls” – decorated in intricate ceramic tiles – boast enormous glass jars of pickled vegetables layered like desert sands, urns brim with six varieties of olives, and goat cheese tortes are surrounded by platters of nutted rices and salads. Baskets of sabras (prickly pear), apricots, watermelon, dates and figs spill over wheels of cheese and sculpted butter. Another stall groans beneath 15 varieties of seeded breads and rolls. And we haven’t even started on the hot buffet.

“It’s a very nice symmetry, don’t you think?” Igra says, looking across the elevated pool into a myriad of horticultural tapestries on the distant promenade, the Red Sea an endless mirror in his design.

The exterior gardens meld into the interior, giving the illusion that barriers are obsolete, and life-size sculpted ibexes jump from water-lily- and bullrush-strewn ponds through the glass doors of the hotel.

“I’ve designed many interiors but never landscaping,” says Igra. I wanted to do the exteriors here and create a feeling of the Islamic bustan, a magic garden where plants were placed as collections brought in from exotic lands.”

The enchantment of Herods Palace truly is in the details. “What delights me,” he adds, “is that we have been able to create a curiosity in our guests about our history because we live and breathe it every day.”

– Air Canada and El Al fly to Tel Aviv from Toronto direct or with a stopover in Montreal. Check with your travel agent; flight prices vary substantially throughout the year.

– Car rentals and gas (by law, all vehicles are air-conditioned) are very expensive in Israel, about $80 per day. It is a five-hour drive from Tel Aviv to Eilat if you wish to see the beautiful Negev desert or take a side trip to the Dead Sea. Highways are excellent; the drivers are not. If you dare to drive, be prepared for speeding and excessive tailgating.