An homage to a bygone era where food, service and cutting edge design converge to create an unparalleled sensory experience. 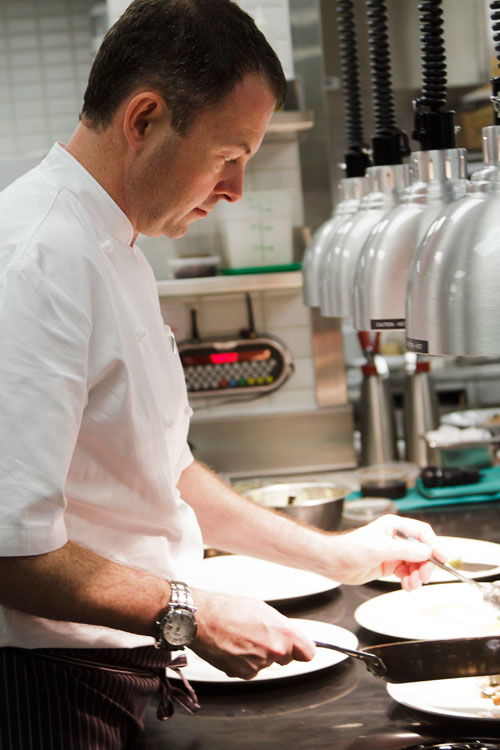 The Hotel Georgia originally opened its doors in 1927 during U.S. prohibition – the elegant little gem attracting a celebrity clientele the likes of Katherine Hepburn, John Wayne, Bob Hope, Nat King Cole, Louis Armstrong and later Elvis Presley and The Beatles. Falling into disrepair in the late 60s, The Georgia Bar & Grill space, remained empty for years – a prime location David Hawksworth, a native Vancouverite, kept simmering in the back of his mind.

Meantime, he moved to London, England where he honed his culinary expertise for 10 years working in Michelin–starred kitchens such as Le Manoir aux Quat’ Saisons, L’Escargot and The Square . “London is a much more difficult place to work – I saw pans flying on a daily basis there,” admits Chef Hawksworth. “Egos are toned down much more in this city.”

Returning to Vancouver in 2000 to head up the kitchen at West Restaurant & Bar, he garnered numerous accolades there from Vancouver Magazine’s Restaurant Awards and in 2008 Chef Hawksworth was named to Western Living Magazine’s Top 40 Under 40 and became the youngest chef inductee to the B.C. Restaurant Hall of Fame.

Still obsessed with the merits of opening in the legendary Hotel Georgia across the street from another heritage building, the neoclassical Vancouver Art Gallery, “I thought, if I could only get to speak with the owners I could convince them of the potential of Hawksworth Restaurant in their hotel.”

This is when serendipity played her trump card.

One evening friends of Chef Hawksworth were dining with another couple at West. He prepared a very elaborate fish soup he knew his friends enjoyed. Unbeknownst to him, their guest was Bruce Langereis the President of Delta Land Development who owned The Hotel Georgia.

“Three weeks later we had inked the deal and I left West!” says Chef Hawksworth. “You have to realize that this is a very harsh industry- you have to move fast if you want something- there are no soft landings here.” 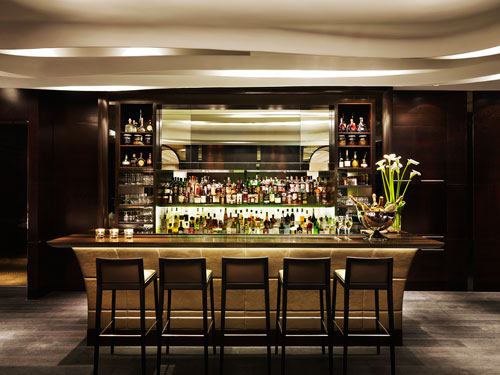 Toronto’s award-winning interior design firm, Munge Leung who created the stunning $120 million remodel of The Rosewood Hotel Georgia, developed an immediate simpatico with Chef Hawksworth: a shared vision of his restaurant that included part subliminal seduction and flawless choreography of food and art that would illicit an emotional connection with patrons of any age.

“I’m a very visual person and Alessandro (Munge) and I travelled to New York, Los Vegas and San Francisco visiting 13 restaurants, viewing all kinds of art, including the avante garde pieces using real butterflies that resemble intricate stained glass windows by British artist, Damien Hirst .”(Chef Hawksworth had met the controversial artist previously while working in London in the ‘90s.) His signed limited edition Big Love In Diamond Dust is a shimmering silkscreen featured in the Hawksworth Cocktail Bar. “We wanted understated glamour for the restaurant not pretense,” explains Chef Hawksworth.

Opening in May of 2011, after numerous construction delays, the 3,000 square foot restaurant is divided into four distinct spaces that flow languidly into each other and are designed to compliment Chef Hawksworth’s unique take on contemporary Canadian cuisine.

The Cocktail Bar, a rather sensual, intimate space with Spanish granite and
leather- wrapped bar encircled in chrome, plush corner banquettes and sculptured organic ceiling, “serves some of the best modern and classic cocktails in the country,” says Chef Hawksworth. These include some pre-Prohibition specialties with botanical infusions, house-made bitters, and unusual craft beers. He has even brought back the Plymouth Gin Cocktail: a 1945 recipe from the original Georgia Hotel bar that combines a mixture of orgeat syrop (almond flavoured with orange blossom water), fresh lemon juice and frothy egg whites. Paired with his Bar Bites like KFC- Korean fried cauliflower; market fresh oysters and spicy yellow fin tuna – they are informal pre-dinner teasers or a casual destination in themselves. 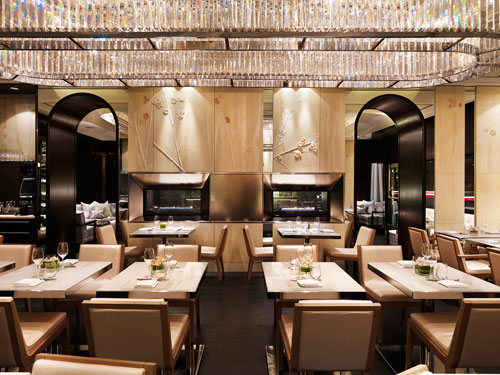 When an oversize white soup bowl is brought to the table with an abstract of red lobster, crispy pink prosciutto and crunchy green peas on only half of its surface, I gaze in anticipation at the unfinished canvas, until a ladle of vibrant green pea and nettle soup is added at the table, to the mix. Hamachi sashimi with passion fruit, puffed rice, scented lemon grass and sea asparagus so tiny that even Charles Darwin would be flummoxed, is presented with a coconut sorbet and a surprise kick of chile on the tongue.

From curated vantage points in the 40-seat Pearl Room, a, floor to ceiling glass wine cellar showcasing 4,000 plus bottles, is not only oenophile eye candy. Designed with rolling drawers specifically sized for wine bottles, there is also a practical workstation so that sommeliers can pour, taste and make notes on the spot. A 12-tap Cruvinet nitrogen wine preserving system offers a large selection of wines by the glass. With plans to increase their already platinum selection of European producers Chef Hawksworth has also cemented his relationship with award-winning Orofino Winery on the Cawston bench Similkameen Valley B.C., producers of several branded H’s-Blend wines available exclusively at Hawksworth Restaurant. 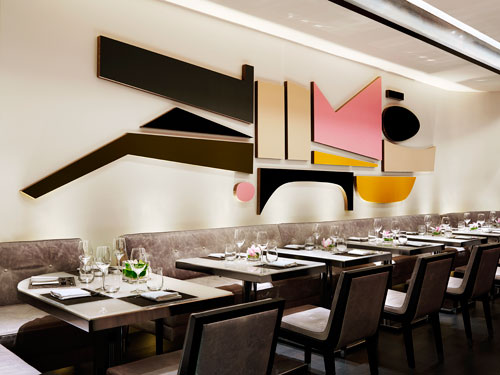 Polished mahogany open arches in The Pearl Room reveal just enough of the kinetic puzzle pieces of B.C.-born Rodney Graham’s Psychomania Variation III installation, to arouse the curiosity about the 40-seat Art Room next-door. Creating the illusion of a much larger dining space, the multi-panelled liquitex on linen abstract, (surprisingly inspired by the 70’s British zombie movie of the same name), is mounted behind soft leather banquettes and provides a completely different dining ambiance.

The most formal and intimate of the four spaces is the 1920’s inspired private York Room with its gold embossed original crown moldings, vintage crystal chandeliers and floor to ceiling stained glass windows with views of the Vancouver Art Gallery. “This room was really important to me,” explains Chef Hawksworth, “because there are endless opportunities to host private functions here with a capacity that varies from 60 to 110.”

The Hawksworth Restaurant kitchen is not exempt from the most cutting edge design and appliances just because it’s not in plain sight. The 1,200 square-foot space is dominated by a cobalt blue Garland Cooking Suite; separate stations for
meat, fish, hot and cold appetizers, garnishes and pastries; a Pacojet ice cream maker; computerized Convotherm oven and KDS touch and display screens on which all food orders appear, making for not only a paperless, environmentally friendly kitchen, but a quiet one.

“I really don’t have a signature dish, admits Chef Hawksworth “because everything is created not only seasonally but with daily sourced fresh ingredients in mind. I try to add a new dish every week but am certainly accommodating to patrons who ask for their favourites. Our award-winning team, (Kristian Eligh Chef de Cuisine, Wayne Kozinko , Pastry Chef, Wine Director, Bryant Mao, General Manager, Chad Clark and Head Bartender Cooper Tardival) meet often to discuss ideas and ensure absolutely everything is running smoothly.” 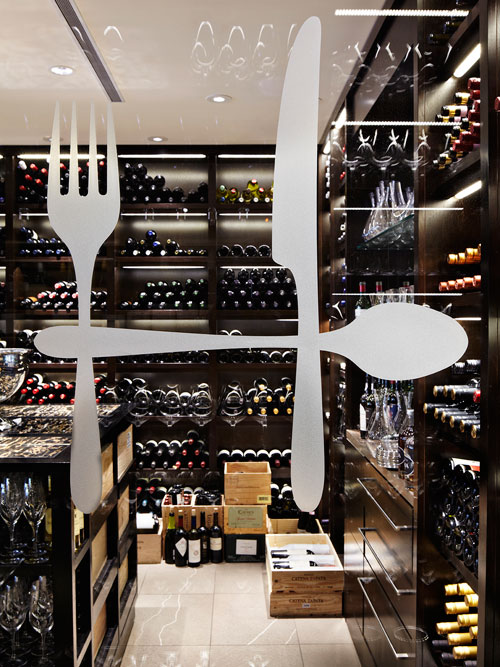 With a staff of 140 and up to 700 platings a day, that also includes Bel Café (named after his British wife, Annabel.) The hip, European-style eatery at the hotel’s south entrance, serves his signature gourmet sandwiches, pastel macarons and specialty coffees and teas.

“We’re already in year seven or eight of our business model,” beams Chef Hawksworth. “But I’m super competitive,” he confesses. “I needed to be that way in the UK and certainly with all the great restaurants in Vancouver, I have to stay two steps ahead to keep us on top.” Maclean’s Magazine recently named Hawksworth Restaurant of the Year but he doesn’t rest on his laurels, always striving to be more creative and incorporate the newest global food trends into his repertoire.
A huge fan of 85-year-old sushi master, Jiro Ono, owner of the Michelin three-star Tokyo restaurant, Sukiyabashi Jiro, Chef Hawksworth was so excited after viewing the documentary Jiro Dreams of Sushi, on Netflicks, that he and Chef Eligh flew to Japan to meet the master chef in person!

There is not the smallest detail that appears to have escaped the Munge/Hawksworth artistic collaboration, nor conversely, can anything be construed as overkill in the restaurant. From the clever “H” logo designed using simple utensils, subtly ascribed to pins worn by his staff to Vancouver artist, Brian Boulton’s graphite drawing of Executive Chef Hawksworth in his whites, (cheekily hung near the washrooms) and viewed from the back contemplating something….. His next tour de force perhaps?
-30-

SIDEBAR:
Mentoring the next generation of new Canadian culinary talent is an important way of giving back to the community for Executive Chef David Hawksworth. Ten young chefs from across Canada will have the chance to win a life-changing grand prize of $10,000, sponsored by The Chefs’ Table Society of BC, at the inaugural Hawksworth Young Chef Scholarship Competition taking place at the Pacific Institute of Culinary Arts, Vancouver on Sunday, October 27th, 2013. For details: http://www.hawksworthscholarship.com
Tickets are available for a gala fundraising dinner on that evening- Chef David Hawksworth, Chef Kristian Eligh and fellow judges Chef Mark McEwan, Chef Anthony Walsh, Chef Connie DeSousa and Chef Vikram Vij will each be creating a course for this event that showcases the best of Canadian culinary talent.
(604) 673-7000 for more info and reservations.