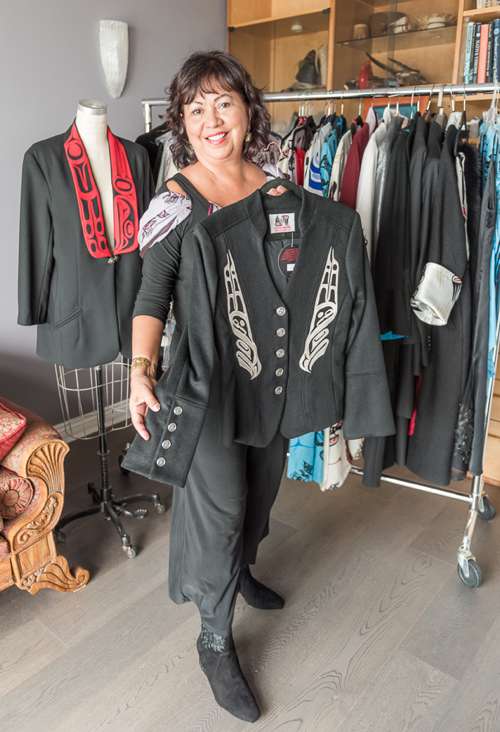 Sounds of ferry foghorns roil through the haze across the Salish Sea and over miles of beachfront, a ghostly boneyard of logs and driftwood. Fashion designer and Haida artist, Dorothy Grant is quietly contemplating the spectacular views through floor to ceiling glass across her corner penthouse condo. But her hands are rarely still.

“I hadn’t expected to find this place,” she admits, “still over the moon” about her serendipity twenty-one years ago when she saw a sign that read ‘Ysatsu Shores’ on a winding side road on the edge of an isolated forest on First Nations land in Tsawwassen. “I had just opened my store in downtown Vancouver in 1994 but had always wanted to escape the city to live,” Grant confides. She was one of the first buyers, moving in 1996 into the spectacular oceanfront condominium development by Chandler Associates Architecture that resembles a sprawling Pacific Northwest lodge. Her condo overlooks a bird sanctuary where hundreds of herons gather on intertidal pools. It was the perfect location from which to re-establish her studio and online business designing Haida inspired couture fashions, fabrics and accessories for both women and men.

“The Haida are in harmony with nature and we believe the hands are connected to the mind and heart,” explains Grant who has adopted that motif as her logo. “The palms have human faces that represent creativity and healing which the artist communicates by working with the hands. They reflect the creative spirit within.” 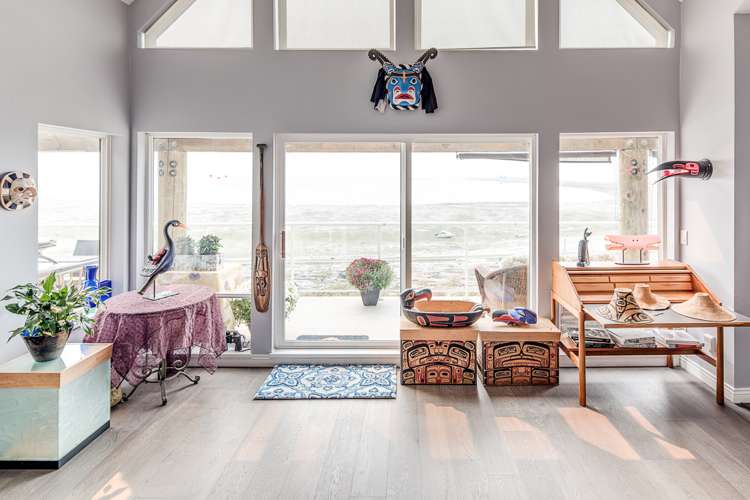 The 1,900 square-foot condo on two levels, has a master bedroom loft that overlooks the open plan main floor, with soaring 20-foot ceilings and windows that bathe Grant’s home in ever-changing light. “Sometimes I feel like it’s a sundial in my living room,” she laughs. Grant wanted a “beachy look” of hardwood floors to tie-in with the nature and shoreline outside so chose a wide-plank oak throughout. On the wrap-around terrace there is outdoor seating and a daybed, the latter perfect for sleeping on very hot nights when cool breezes off the sea bring a welcome relief.

Interiors are decorated simply with dramatic punches of red on black emanating from indigenous paintings like Alano Edzerza’s Red Raven over the fireplace; sculpture, masks and blanket boxes. They all incorporate traditional Haida symbols of ravens, salmon and eagles. Her personal collection of intricately woven baskets and headwear, some of which Grant made herself, are displayed on a tall etagere. 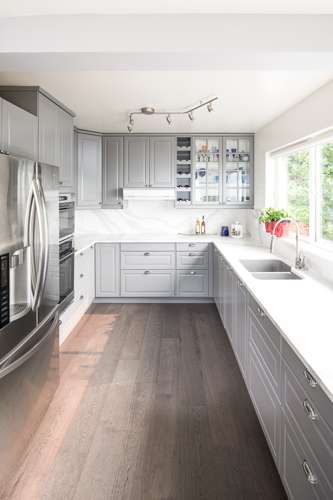 The kitchen was recently gutted and re-designed with IKEA cabinets in soothing tones of grey and white. “I love the quartz countertops and backsplash I chose because the veins remind me of meandering streams,” she explains. “I’m a very organic person and love to cook, entertain and eat healthy foods.”

One of three bedrooms has been converted into Grant’s design studio on the main floor, a comfortable atelier where clients receive fittings. Stunning cashmere wool, cotton jacquard and silk dresses and coats that reflect classic, contemporary styling with mythological Haida motifs in applique and embellishments, are all aligned on a rolling rack. They are wearable art without looking like costumes.

“In Alaska, where I was born, girls took home economics and I was completely enthralled with the sewing machine,” relates Grant. So much so that the 13-year-old made clothes for her younger sisters. Later, after Dorothy Grant was married, her Haida ‘grandmother’ through marriage, the late Florence Edenshaw Davidson, taught her the ancient art of basket weaving with spruce roots. “She saw something in me that no one else saw,” Grant reminisces. “She instilled in me a very strict discipline and work ethic and an indelible spirit that has been with me through 33 years of a very tough retail business and three recessions.” As early as the 80s, Grant realized she could create a unique niche business and at the same time, reclaim her culture that was being appropriated by non-indigenous artisans. 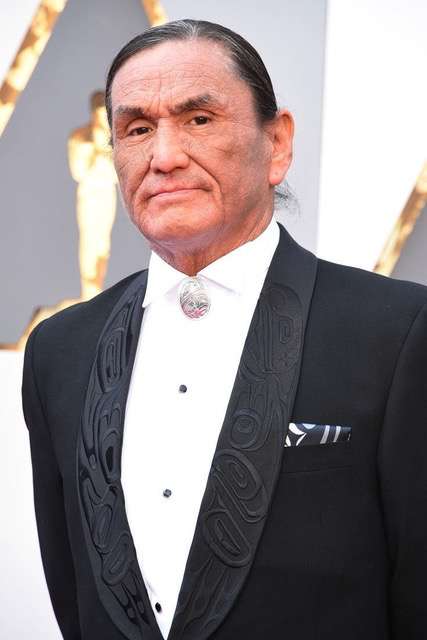 “I’ll never forget that famous 1991 Time Magazine cover with model, Naomi Campbell in the Totem Pole Dress designed by Isaac Mizrahi,” Grant relates. “It’s not that I was so angry, just disappointed. I thought, why not reach out to an indigenous artist for traditional designs and work with them to create the dress?”

The recipient of the Order of Canada in 2015, Grant’s clients are a mix of celebrities – Buffy St. Marie, actress, Tantoo Cardinal, Susan Aglukark, Mary Louise Parker, Peter Coyote, Richard Thomas and the late Robin Williams as well as professional people from many walks of life. “Strong, empowered women and men who aren’t afraid to be different are my clients,” affirms Grant. In 2016, she dressed actor, Duane E. Howard when he walked the red carpet at the Academy Awards. Howard portrayed ‘Elk Dog’ in the Oscar-nominated The Revenant, starring Leonardo DiCaprio.

“I dressed Duane in my Eagle Raven shawl collar bespoke tuxedo. We accessorized it with a fine arrow tipped pleated front tuxedo shirt and a silver carved raven pendent by Haida artist, Alvin Adkins. I also made the Eagle silk hankie as a final touch. At the third fitting in my studio, when I saw him all put together, I literally cried,” laughs Grant. 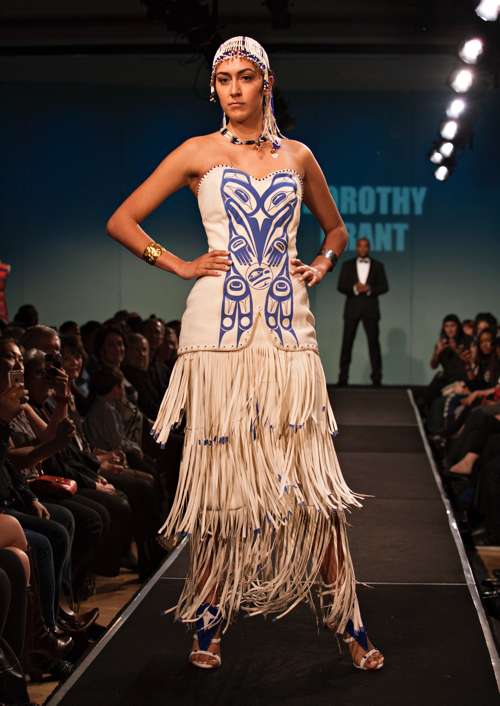 Grant’s pieces are collected and exhibited internationally including at the grand opening of The National Museum of the American Indian in Washington, D.C.; permanent collections at the Museum of Civilization, Hull, Quebec; Seattle Art Museum; National Gallery of Canada, Ottawa, Museum of Anthropology at UBC and the Audain Art Museum in Whistler.

Her current projects include writing her memoirs for a coffee-table book and the acquisition of her exquisite white deerskin Haida Wedding Dress by the Smithsonian Institution in Washington D.C., the world’s largest museum. “I’m so excited about that because the Wedding Dress came about in such a mystical way,” enthuses Grant. “Many years ago, I had a vivid dream in which my mother, who was deceased, told me I must create a wedding dress for her as she never had one. I began work immediately and years went by. At a fashion show in New York this year at which the Wedding Dress was modeled on the runway, someone from the Smithsonian was in the audience and got in touch with me! I think it was more than a coincidence,” smiles Grant.