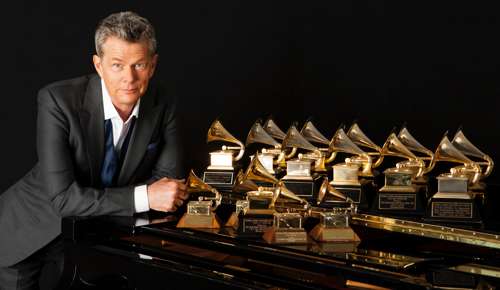 Renaissance man, musician-composer-producer, philanthropist and 16-time Grammy Award-winner, David Foster is holding court in the panoramic 6th floor D6 lobby lounge of the DOUGLAS, Parq Vancouver’s new luxury downtown hotel. Dapper and fit, (he’s claustrophobic and never uses elevators preferring the stairs wherever he stays,) the Victoria-born Foster, 67, has rallied the celebrity troops for his 30th Anniversary Miracle Gala & Concert fund-raiser. Foster’s commitment to his eponymous Foundation created in 1986, provides financial support for non-medical expenses to Canadian families with children in need of major organ transplants. The seed for the David Foster Foundation was planted years ago with a phone call from his late mother, Eleanor.

“Her call from Victoria hit me like a ton of bricks,” Foster admits. “‘There’s a sick child in LA who needs an organ transplant. You live in LA- go visit her!’” she told me. “It was a direct order from my mother and so I did. That’s when you realize the family dynamics when there’s a sick child – the stress is insane, and thank goodness I’ve been fortunate enough to have only experienced it second hand,” says the father of five daughters, several step-children and seven grandchildren.

“If we had a 100% sign-up rate of organ donor cards we’d be out of business, which would be great,” quips Foster optimistically “but nationally, it’s only at 14% so we are raising the goalpost and hoping to reach $50 million in fundraising by the end of 2018.” “I have no shame in calling in the favours from my celebrity friends when it comes to my Foundation,” he laughs.

An astute spotter of aspiring talent, Foster is credited with discovering and launching the careers of Canadian mega stars, Celine Dion and Burnaby’s Michael Bublé (the latter he met at the wedding of the daughter of former Prime Minister Brian Mulroney in 2000 when the crooner sang his rendition of Mack the Knife and Foster was a wedding guest.) He also steered classically trained artists, Josh Groban and Andrea Bocelli into cross-over pop and international stardom.

The man has got the Midas touch!

Foster is remarkably down-to-earth about creating hit songs and producing award-winning gold and platinum albums for Barbra Streisand, the late Whitney Huston, Michael Jackson and Prince; Rod Stewart, Beyoncé, Madonna and Stevie Wonder to name only a few. He is also a recipient of the Order of Canada and has a star on both the Canadian and Hollywood Walk of Fame.

Constantly juggling multiple projects including as a judge on the TV show, Asia’s Got Talent and recent brand ambassador for AirAsia, “I haven’t been in the studio since December 1st last year and it’s been so liberating for me!” Foster relates excitedly. “I love the challenge and it was the right time to walk away from that part of my life.”

Foster’s newest incarnation is composing the music for a Broadway musical based on the 1930s cartoon character, Betty Boop to open in 2018. He’s also writing his autobiographical one-man show directed by choreographer, Kelly Divine from the Tony Award-winning Canadian musical, Come From Away. Those projects also prompted a hip new address in New York.

“Broadway is a strange beast- you can’t just walk in and takeover,” Foster explains. “I really wanted to be part of the Broadway community because they don’t like outsiders. So even though I still have a home in LA, I bought a place in Tribeca. That’s such a cool neighbourhood. It’s a 3-bedroom apartment and it’s really nice.  So I’m all in for Broadway,” he smiles.

(Foster, with now ex-wife Yolanda Hadid, had also owned a spectacular penthouse at Shoal Point in Victoria which he sold for $5 million in 2014.)

“It’s been hard work and a huge collaborative effort because I’m used to being in charge,” David Foster admits. “We have the Tony Award-winning director of Kinky Boots, Jerry Mitchell – he’s amazing- and he’s made me dig deep. It struck me at just the right moment and I thought Broadway is a place I can do something good.” He adds with self- deprecating humour, “It may not be for those youngsters, Bieber, Drake and The Weekend but I still know how to write a good song and still know how to move people.”