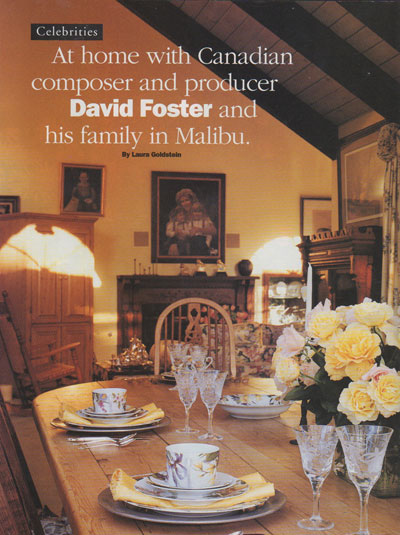 Driving past the undulating, azure waves of the Pacific, caressing a submissive coastline, it is easy to see how Canadian producer, composer, Grammy and Juno award-winner, David Foster and his wife, lyricist, Linda Thompson, were seduced by Malibu.

Winding through sequestered canyons, this secret garden, so recently threatened by encroaching fires, is an enclave for celebrities who shun the ostentatiousness of LaLa Land.

A small stencilled sign The Knest coyly announces the house, hidden by foliage and a high blue wooden gate.

“Kenny and Marianne Rogers were very good friends of ours when they bought a twelve- acre estate in Beverly Hills, up on a huge hill , which they called The Knoll,” recalls Thompson.“ I imagined that my one – acre retreat down here, was like a little nest. I thought that if they could have the K- noll , I could have the K- nest !”

Purchased thirteen years ago by Thompson, ironically not because it captured the casual, flirtatious California lifestyle but because the grounds were so reminiscent of her native Memphis, Tennessee.

“ It really has that Tennessee feeling about it – surrounded by sycamore and pine trees and a little creek that runs around fifty percent of the property. Some of it runs into the ocean and the other half up to a waterfall. We often hike up to the top.”

“Malibu’s low-key, almost small town community is as close as we can get to how we were both brought up”, confides Foster. “I had a house in Vancouver which I sold in 1985 and I still own waterfront property in Victoria, but I had to be realistic and make a permanent move closer to Los Angeles where the music business has its heart.”

The Knest is as nurturing and protective as the nick-name implies. The blue cedar chalet-like exterior with white lazy wrap-around lattice porches, exquisitely detailed French doors and windows and master bedroom with its own private terrace perched up in the tree-tops, exudes a Swiss Family Robinson charm. An ajacent recording studio and guesthouse continue the airy, country feeling.

“ We didn’t want anything to be too formal“, explains Thompson, “or any of my knickknacks to be more valuable than our childrens’ freedom to enjoy their house as their own. There are just too many homes here that are like shrines.”

Photographs of their children abound, (Linda has two sons, from a previous marriage to Olympic decathalete, Bruce Jenner and David has four daughters ages eight to twenty.) In fact , Thompson, unabashedly sentimental, delights in the childrens’ framed artwork, proudly displayed throughout their home, while Foster’s eight Grammy Awards from previous years, are modestly tucked away in an antique oak cabinet!

Fragrant with the infusion of succulent oranges, grapefruit and corpulent lemons, the grounds surrounding the house may appear serene but are just as likely to inspire a family water war game as a solitary stroll through the orchard to collect fresh eggs from a tiny hen house.

“Lavish parties aren’t our style, although we love to go to them,” laughs Foster. “In Malibu, our lives are 99% sweat clothes and 1% glamour and I think that’s just the right proportion.”

“We do casual barbecues with our friends and their kids and you can usually count on no rain,“ says Thompson. “I have a big Easter- egg hunt for fifty kids here in the garden every year, and we hide about 500 chocolate and filled eggs. We just found one the other day in the flowerbed left over from last year’s party!”

Thompson likes to describe their home as “eclectic”. She is a passionate collector of antique quilts and African-American folk art especially hand-made soft sculpture dolls and paintings. 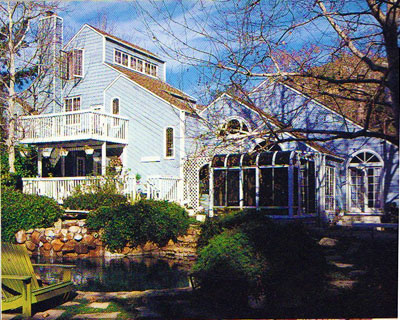 “I remember once, when Lionel Richie was visiting, he was quite surprised when he saw my collection. But you have to remember that my roots are from the south and I grew up with these beautiful hand-made things around me. Besides, Natalie Cole shares my love for African-American folk art and she gave me her blessing!”

“I also have several paintings by Charles Bragg and Lawrence Icart from Elvis’ estate that are very meaningful to me.” (Thompson lived together with Elvis Presley for five years at Graceland until just eight months before his death.)

“I’ve never really collected art before,” admits Foster, who received the Order of Canada in 1988, “but I’m getting into acquiring original music manuscripts. Linda started me off with one but I think that the ultimate would be to own a manuscript by one of the classical composers.”

Nominated for seven Grammy awards this year, he recently topped himself as Canada’s Grammy Awards champion by winning four in a single year: producer, record and album of the year for his work on The Bodyguard movie soundtrack recorded by Whitney Houston. It was the biggest selling album of 1993 and I Have Nothing, one of its hottest singles for which Thompson wrote the lyrics, was composed by Foster and nominated for an Oscar. The couple married two years ago but have been writing together since 1989.

Foster’s other Grammy was a song -arranging award for fellow Canadian, Celine Dion’s work on When I Fall In Love, from the Sleepless In Seattle soundtrack.

Foster feels that he is finally “at the top of his game right now“ having been named Senior Vice President of Atlantic Records. He recently returned from a highly successful tour of Japan with Celine Dion, performing with the Tokyo Symphony Orchestra.

“I guess it must be my Canadian upbringing, but we always seem to have to work harder than anyone else to prove ourselves,” says Foster who began his professional performing career at age 16 playing backup for the legendary Chuck Berry. 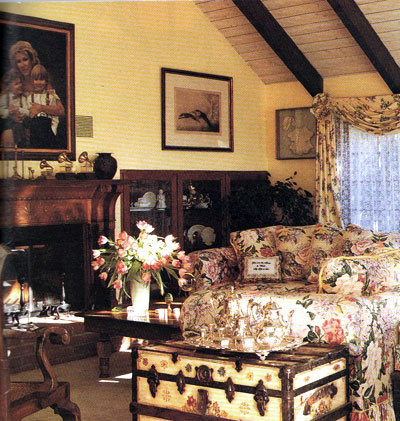 This he has done with a good-natured vengence, parlaying his solid reputation for session work with superstars John Lennon, Rod Stewart and Barbra Streisand in the ‘70s into producing and writing for many artists over the years including Hall & Oates, Boz Scaggs, Chicago, Paul McCartney and Michael Jackson.

He received his first Grammy Award for co-writing Earth, Wind and Fire’s After The Love Is Gone in 1979.

Although they collaborate on projects, Linda’s lyrics have also been recorded by many artists including Kenny Rogers, Melissa Manchester and Art Garfunkel and for the single, No Explanation from the triple-platinum Pretty Woman soundtrack.

“Although Linda and I have combined a successful living and working relationship here at home,” admits Foster, “I still find I like to go into a bigger studio in town just to catch the excitement and get the juices going. It’s amazing how competitive you can get when Prince and Richard Marx are just down the hall!”

When the successful writing team need some much coveted r & r, the entire family, aboard their 61’ Hatteras yacht Chartmaker, make their annual summer sojourn to British Columbia.

Foster, who is also a pilot and keeps his twin-engine plane in his native Victoria, loves to relate this story of how family, career and music are so intrinsicly interwoven.

“Two summers ago I got this call from a friend in Vancouver asking if an actor he knew who was very tired from acting and directing a film, could spend some time with me on our boat around Vancouver. I hemmed and hawed and said how I was there on vacation to spend time with Linda and the kids. He finally talked me into it and I asked, by the way who is it? My friend said that it was Kevin Costner. He had just completed work on Dances With Wolves.“

“He and Cindy brought their kids and we had a wonderful time. We were invited to the premiere of the movie and Kevin asked Linda and I if we would like to write some of the music for The Bodyguard, which he produced and co-starred in with Whitney Houston. The rest as they say, is history!”

The writer flew to California courtesy of Air Canada