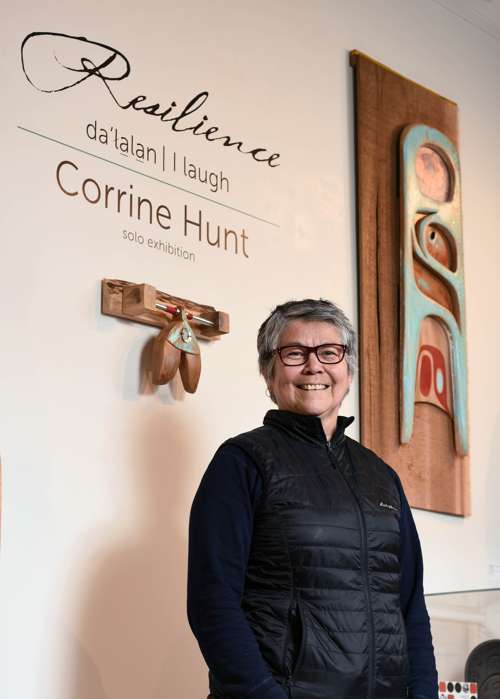 Overseeing and tweaking the mounting of her art panels in Gastown’s Coastal Peoples Fine Arts Gallery, Corrine Hunt, a Kwakwaka’wakw/Tlingit jewelry designer and mixed media artist, exudes both confidence and gentleness. She’s a survivor of some of life’s most brutal crises and doesn’t sugarcoat the anger and grief she experienced working through them. Coping with tragedy through humour has inspired her new exhibition, Resilience: Through Laughter.

“My partner passed away and very shortly after, so did my mother and then in 2006, I was diagnosed with breast cancer,” Hunt confides. “Luckily, I had a lot of support and love and watched three seasons of Arrested Developmentand it’s that laughter that got me through it all.”

Before moving to Vancouver, Hunt grew-up on the reservation and recalls her first drawings as a child, on baby diapers! A member of the Raven Gwa’waina Clan from Alert Bay, she comes from a long line of prestigious Canadian artists including carvers Henry, Tony, Richard and Stanley Hunt. She remembers as a child watching in awe, as her uncle and mentor, jewelry designer, Norman Brotchie created intricate engraved pieces. “My great -great grandmother Anisalaga, was a Tlingit noblewoman from the “Drift Ashore” house in Tongass, Alaska. A weaver, her pieces are in collections all over the world, so I’m just a small spec in that legacy,” she adds modestly. Hunt’s background majoring in Anthropology and Latin American Studies at Simon Fraser University, led to stints working in Mexico and her continued fascination with other cultures.

“I’m the kind of person who just goes out and explores things especially when I travel,” Corrine Hunt explains. And while of course I’m influenced by my own culture, I don’t rely on traditional myths as inspiration for my contemporary pieces. I can be inspired by a Kandinsky painting or the laughter at a traditional potlatch in my village. I really love organic shapes in my work that make people just want to reach out and touch them. I try to give all my pieces an ephemeral quality that challenges people to ask questions,” she says.

Corrine Hunt began working in silver and gold jewelry in the ‘80s, creating contemporary rings and layered pendants like Totem Moves, braceletsand earrings engraved with abstract indigenous symbols and inlaid gemstones. She soon discovered sculpture, carving modern totem poles and gallery installations. “I’m a gatherer and love finding my cedar and driftwood and then decide in the moment what I’m going to create. The cedar tree in our culture is known as ‘the tree of life’ and the wood is really beautiful when it comes alive, even if it’s 1:30 a.m. in the morning,” she laughs. Hunt’s addition of metal and abalone as depicted in the Exhibition’s title art, Eagle Maskand their juxtaposition with vividly painted wood, creates a rich, reflective, multi-dimensional aspect to her pieces.

White Heron, one of several 3d wall panels, is laser-cut on steel and perches on yellow cedar wood. Not only consigned to the indoors, Hunt’s art panels can be mounted in the garden or on a deck, the aromatic wood aging to a soft grey patina over time. 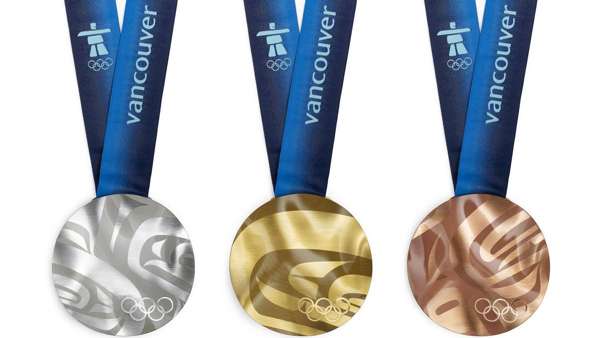 Hunt’s insatiable curiosity and global interests have contributed to her tremendous versatility when presented with challenging projects. From her logo design for the 2006 World Peace Forum in Vancouver; collaboration with Vancouver lighting designer, Omer Arbel for the 2010 Vancouver Winter Olympic and Paralympic Games medals, to fashion accessories like vibrant eyeglass frames for AYA Optical and the Corrine Hunt Collection of hand-made Mukluks for Canadian footwear brand, Manitobah.

She has had two shows in Dusseldorf and Hamburg and in 2011, Hunt travelled to Dresden, Germany with an exhibition she designed entitled The Power of Givingat the historic Staatliche Kunstsammlungen Museum. It featured 67 pieces of potlach art originally confiscated by the Canadian government in 1921 when potlach celebrations were banned.

In 2018 she collaborated with The Granted Sweater Company in B.C. and Burton Snowboards to create the motifs for knitted jackets sported by the Canadian Freestyle Snowboarding Team at the 2018 PyeongChang Winter Olympics in Korea. 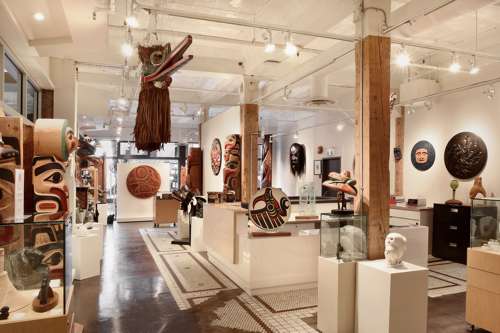 Never resting on her laurels, Resilience: Through Laughter

also premieres Hunt’s newest foray in wood: a collection of coffee tables that are so cleverly executed, they can’t help but illicit laughter. Emerging Turtle (End Table)pokes its inquisitive head out of a hollow carved within the reclaimed red cedar.

in Alert Bay last year and it’s been a joyful time in my life,” says Hunt. Our culture is a thriving one. But then, we are a very resilient people.”