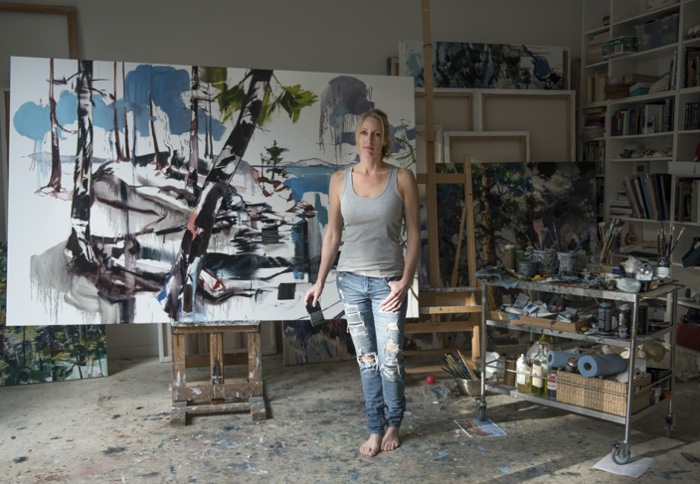 Like painter, Emily Carr’s veneration of the rugged British Columbia coastline and lush rainforests, Vancouver-based artist, Cori Creed immerses herself in the spontaneity and unpredictability of nature.

“I love to be outdoors hiking and climbing, then try to recapture on canvas that emotional place I’m experiencing by drawing the viewer into that illusion of space to tell a story,” she says from her cavernous light-filled home- studio on the North Shore.

These are not the dark, ominous forests of fairy tales. Creed’s exploration of woods, marshy ponds and tangled undergrowth in her recent Exhibition entitled Narrative at the Bau-Xi Gallery, Vancouver, are inviting, joyous and vibrantly hued.

Sylph-like at 5’11”, her sweeping reach bestows her towering paintings with a physical grandeur that befits her obvious reverence for trees: arbutus, Douglas fir and birch are cherished favourites. Her subjects are never still. Branches bow and logs collide under thick three-dimensional impasto-applied layers of oil paints. Ethereal clouds swirl and sweep across the surface affected by the weather’s unpredictability and ever- changing light. 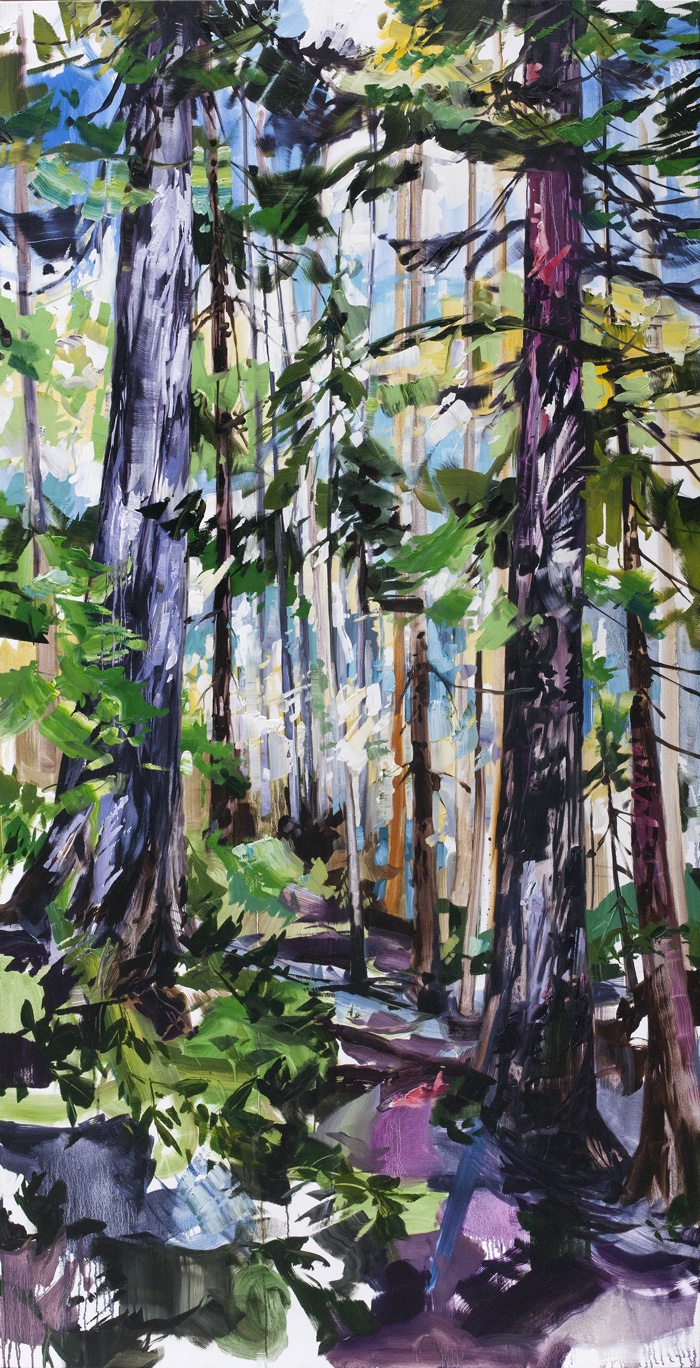 “I’m really drawn to the textured patterning of trees and bark and the graphic elements of the process,” says Creed. “If it’s an arbutus then it’s the figurative and lyrical; birch trees have so much texture and layering in their bark. I’ve always been really drawn to seeing all the drafting marks left behind in Impressionist paintings and I love playing with intentional accidents when I paint. I don’t employ careful applications that some painters do. Instead, I prefer to try to harness some spontaneity at times and also let gravity and the medium dictate some marks, splashes and drips. Then I’ll go back in and curate the marks.”

Creed doesn’t paint en plein air (outdoors) but instead takes detailed photographs while exploring the landscape, often with her three children in tow. “If I have time, I’ll do some quick sketches but I’m usually running to catch up to them,” she laughs. Then, back in her studio where the vast cement floor is strewn like confetti with drips of paint, and usually while listening to music, (or more recently, audio books,) she begins by creating an illusion of space and depth with markings on her canvas.

“Sometimes I’ll do a small piece as a study first then blow it up to the 54” X 54” or even larger canvases.” Later, thick meringue-like peaks of tactile pigment applied with knives and brushes, are juxtaposed with thinning strokes of spray paint, (“I’m a big fan of graffiti,” Creed confides,) scraped and combed so that the viewer’s perception is constantly shifting back and forth from 3D to a more flattened two-dimensional surface. “I’ve been playing with abstraction more and more over the past twenty years with something called ‘disruptive realism.’ It’s a technique that’s very challenging but I think, brings more emotion and depth to a subject,” Creed explains.

The physicality of painting is also important to Creed: while some strokes are made with speed and imperfection with wet brushes, others need a slower, dry brush approach. “It’s always the human storytelling that I’m after in the end,” she says.

Dwarfed by floor-to-ceiling stacks of vertically filed canvases in various states of completion and shelves of psychology and contemporary art tomes, a small framed photograph of Creed’s late grandfather, Aubrey, watches over her progress from the corner of the studio. Originally from South Africa, he bought an apple orchard in the Okanagan when he immigrated to Canada. “He was an artist and I still use his paint palette,” Creed smiles, proudly pointing to the well-worn tool dappled and smeared with hundreds of colourful concoctions. Born in Vancouver, she studied Fine Arts at Simon Fraser University and design at Capilano College then embarked on a career as an illustrator and art director at an advertising agency, before taking the leap-of-faith to work full-time as an artist.

Creed and her family travel every other weekend on field trips to their cottage in Kaleden near Skaha Lake where she can be fully immersed in nature. And, never lacking in imagination when it comes to capturing a mood in her paintings, she admits, “I’ve even been known to go out late at night carting along lights to create a staging in the forest!”