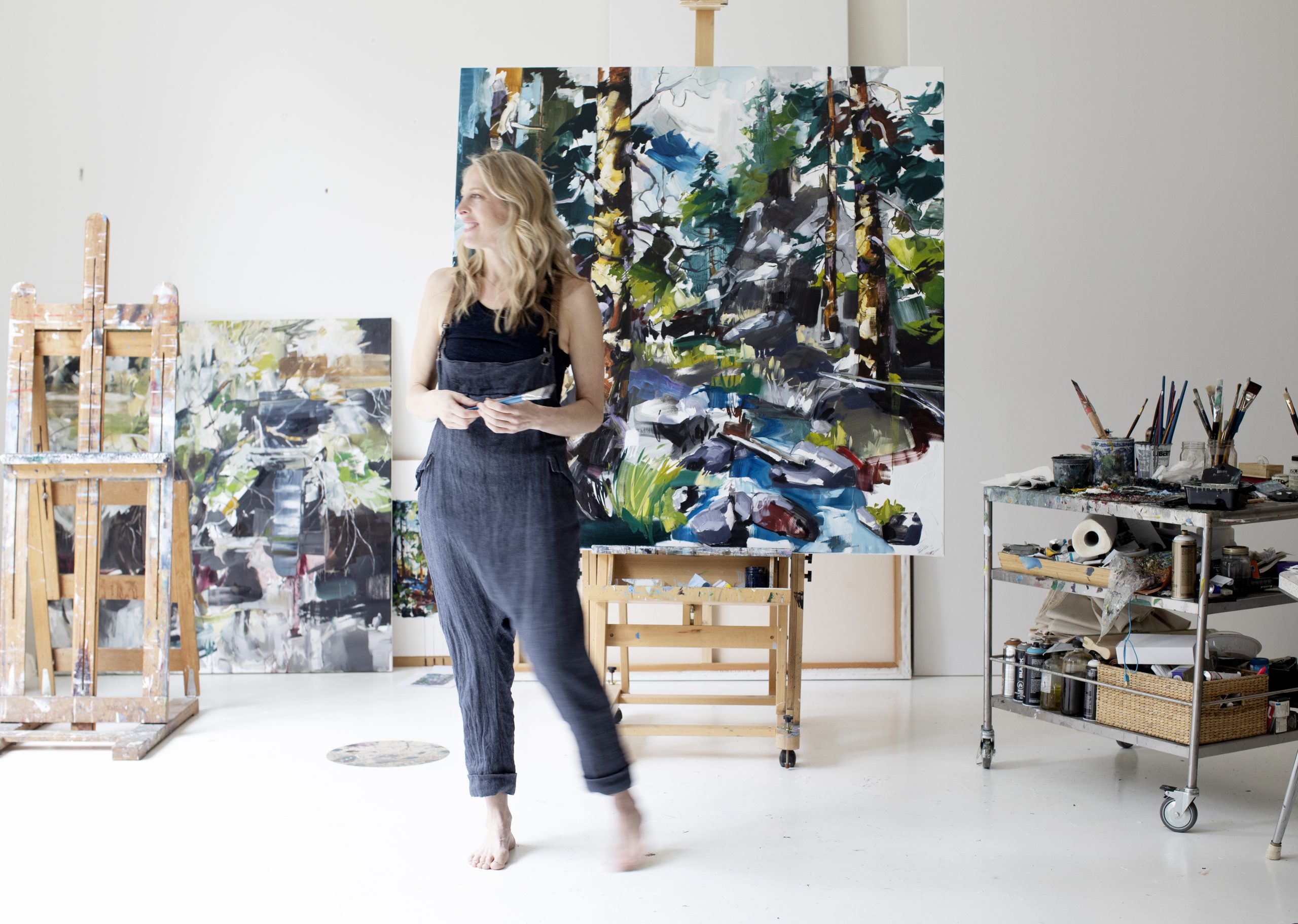 Stepping into painter, Cori Creed’s home in West Vancouver is like meandering through one of her immense abstract landscape paintings adorning the walls. Those same sensory emotions that her art evokes are rekindled in the home’s open concept interiors: light streams through floor-to-ceiling windows in the spacious living room framing the exterior property’s towering birches, cedars and arbutus trees. The air is sweetly scented from logs burning in the black soapstone stove and you’re immediately transported back to hiking through the woods on a crisp spring day. 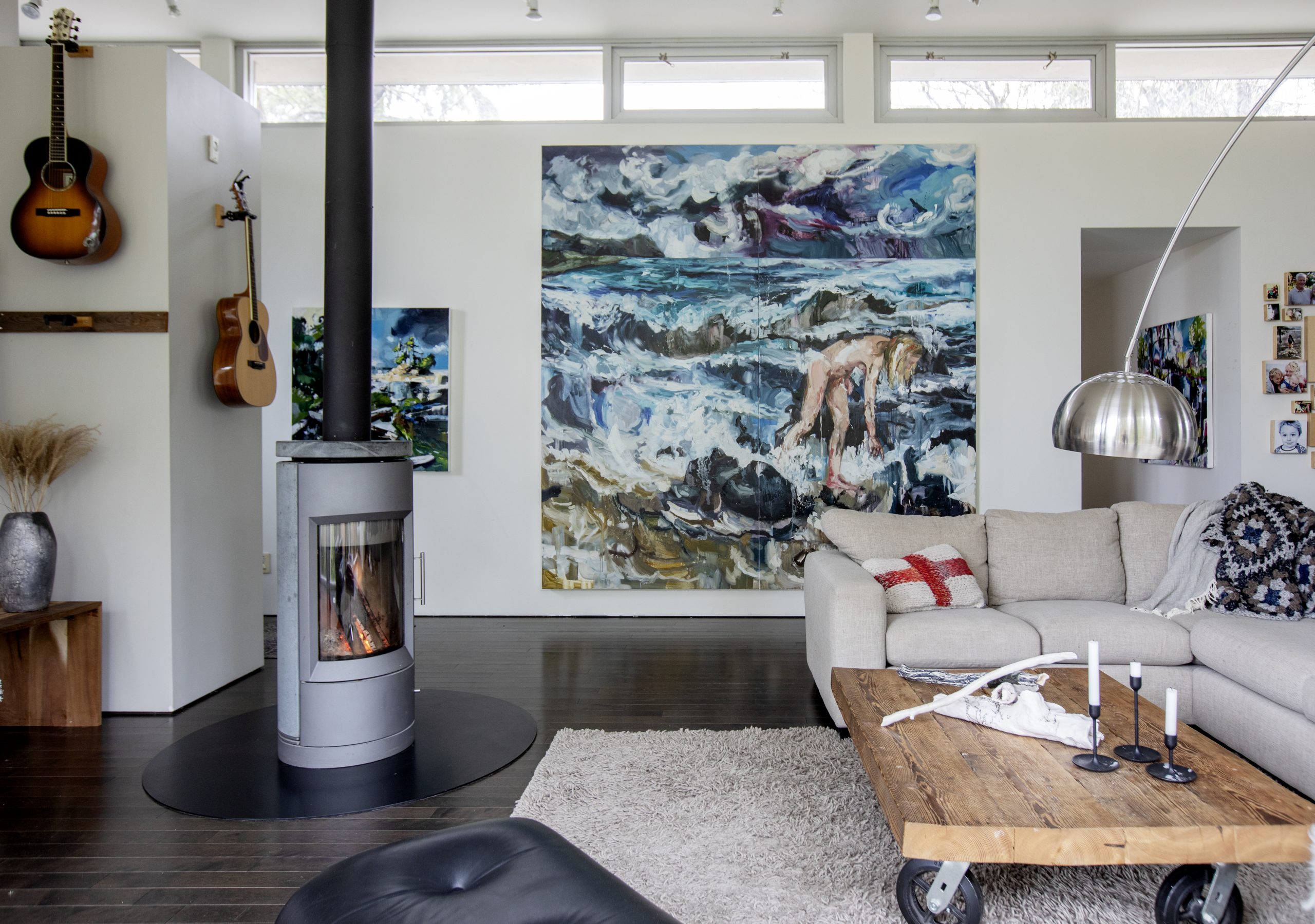 “We bought the place about fifteen years ago when my oldest son Levi, now 15, was a baby. We were originally going to reno but then decided to re-build from scratch,” says the down-to-earth artist, padding around in bare feet and casually dressed in blousy painting attire – natural cotton overalls by Vancouver fashion designer Hajnalka Mandula.

The 4,000-square-foot home built on the crest of a hill with an equally expansive outdoor property, was “designed by architect Cedric Burgers, Craig, (Cori’s partner, lawyer and City Councilman, Craig Cameron,) and his stepfather who also happens to be a contractor, did all the building,” she explains. 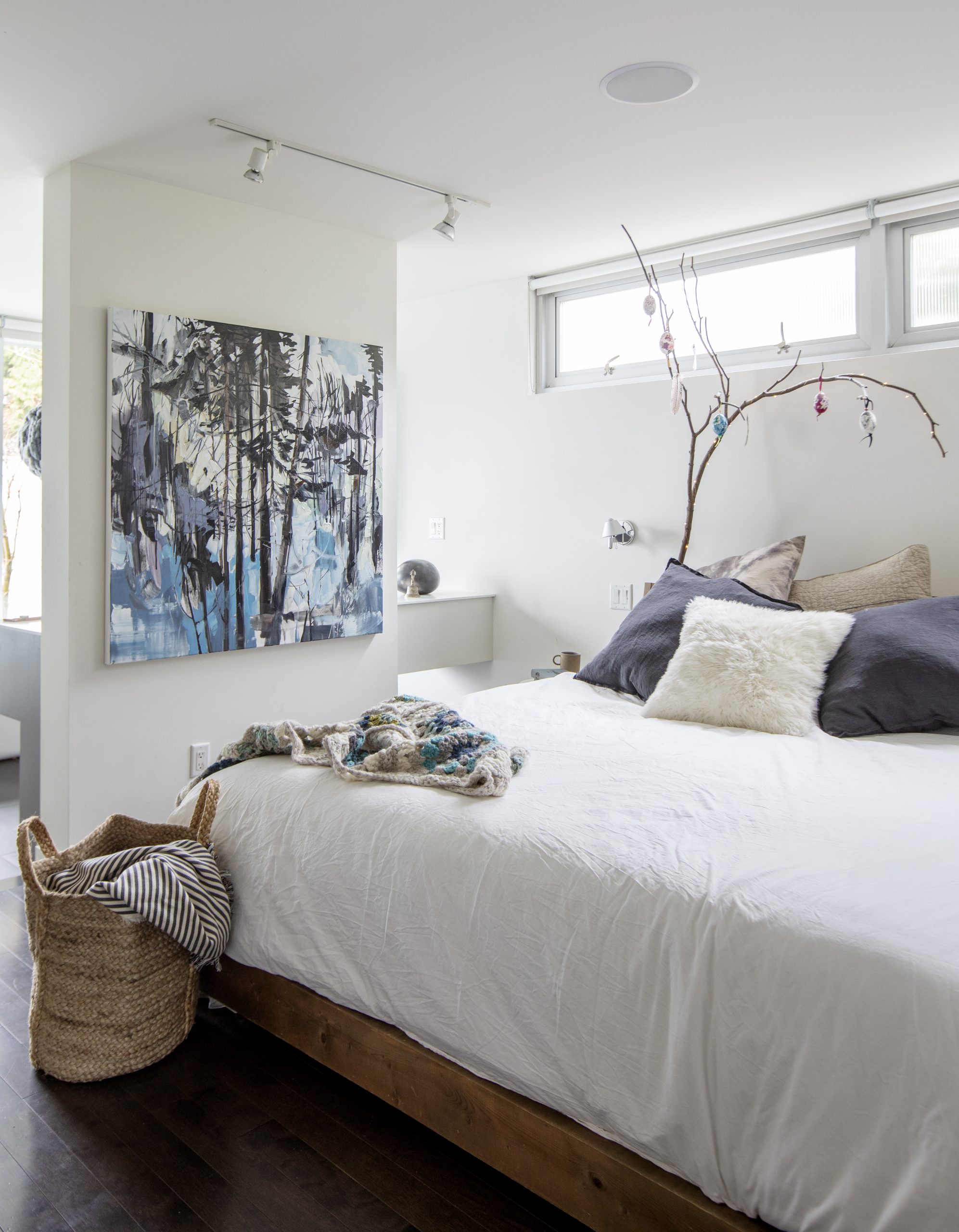 What slowly unfolds in this cozy family enclave is the symbiotic relationship between nature and creativity of not only Creed and Cameron, but her extended family, who have all contributed, each in their own way to the visually intriguing  home.

“I’m really drawn to the textured patterning of trees and bark and the graphic elements of the painting process,” says Creed. And that also extends beyond my paintings to our home,” she says. An arched chrome lighting fixture dips gracefully over the contemporary living room sectional strewn with a crocheted wool afghan and knitted nubby pillows all made by Creed. The rough-hewn reclaimed oak coffee table on wheels is her father, Dio’s handy work. “My dad used to do tree-topping when he wasn’t teaching so lucky for us he still has a good supply of wood.” With her minimalist aesthetic, Creed prefers to let her colourful landscapes hung in every room, do the talking, taking cues for a neutral colour palette of white, grey and charcoal throughout the home from the Jinny Whitehead ceramic pottery found in the kitchen and master bathroom. “I wanted dark floors throughout in contrast to the white walls and chose stained ash,” she explains. 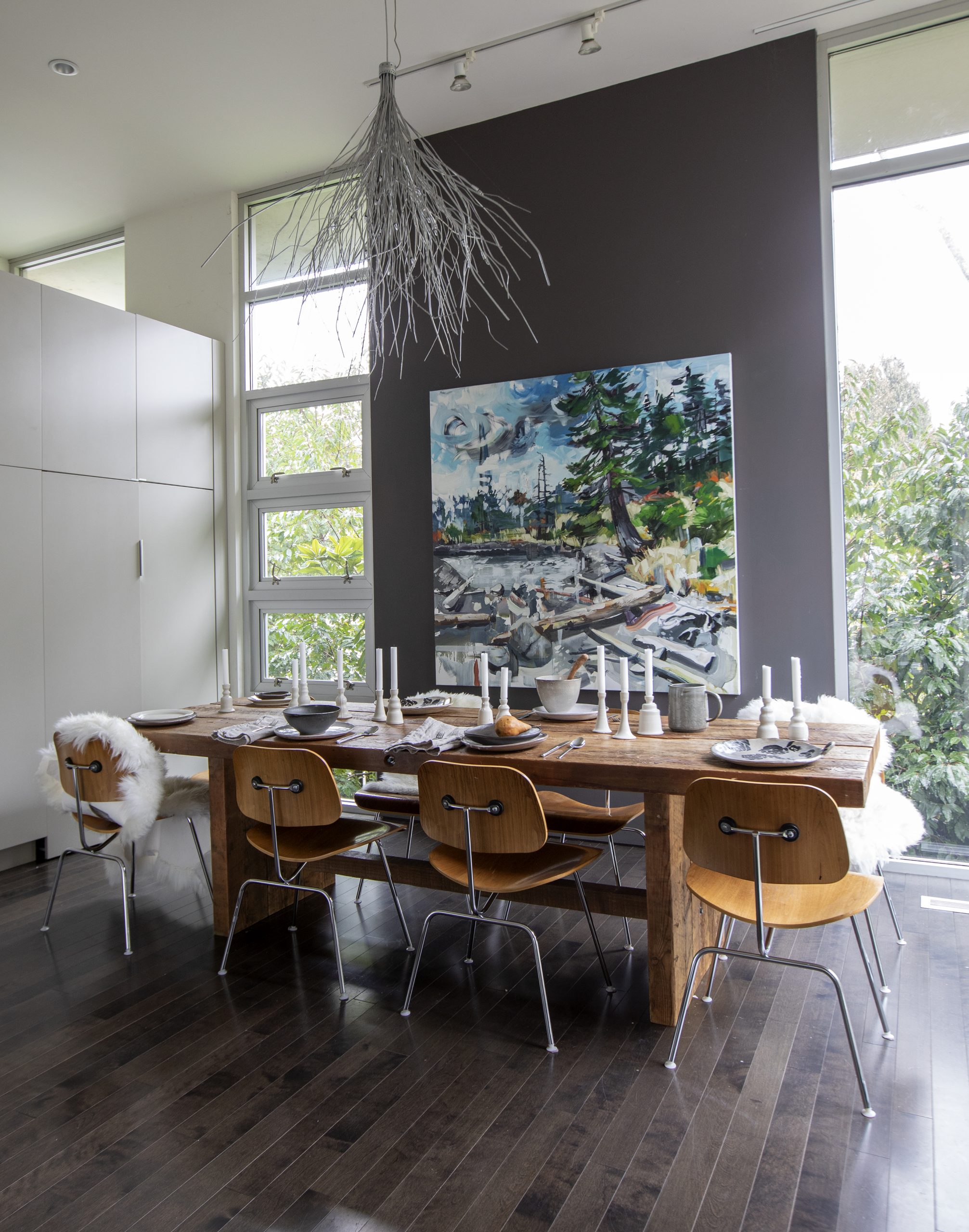 The hub of the open-concept kitchen is an oversized Corian surfaced island that is a popular spot for board game nights and group projects with her kids, daughter Jett 10 and son, Kai 13, like blowing out and dip-dye wax resisting large duck eggs for Easter decorations. It also stores a myriad of cookbooks from Indian to Vegetarian. Although it’s not surprising that Creed loves to cook and entertain, she takes it a giant step further by making many of her own ceramic table settings and vessels on her potters wheel in her painting studio. “One of the things I love about making pottery is the way the light falls on forms. It’s also very meditative for me,” she confides.

Looking through the kitchen into the dining area, one’s eyes are riveted to Creed’s vibrantly colourful painting, Narrative, also the title of her recent Exhibition at the Bau-Xi Gallery. In what could be interpreted as an imaginative extension of the painting’s treed landscape, thin branch-like appendages with tiny lights are suspended from the ceiling. “When we purchased this Italian-made lighting fixture from Luminosa Light Designs in Vancouver, it came all bunched up as the chrome pieces are moldable. Although I’ve seen them pointing up as a chandelier, I wanted them to look like tree roots hanging from the ceiling,” says Creed. The long oak table constructed by Cameron and Cori’s father is simply laid with dinnerware she made and wooden serving pieces carved by her dad. “The Eames chairs were my birthday present,” Creed adds. 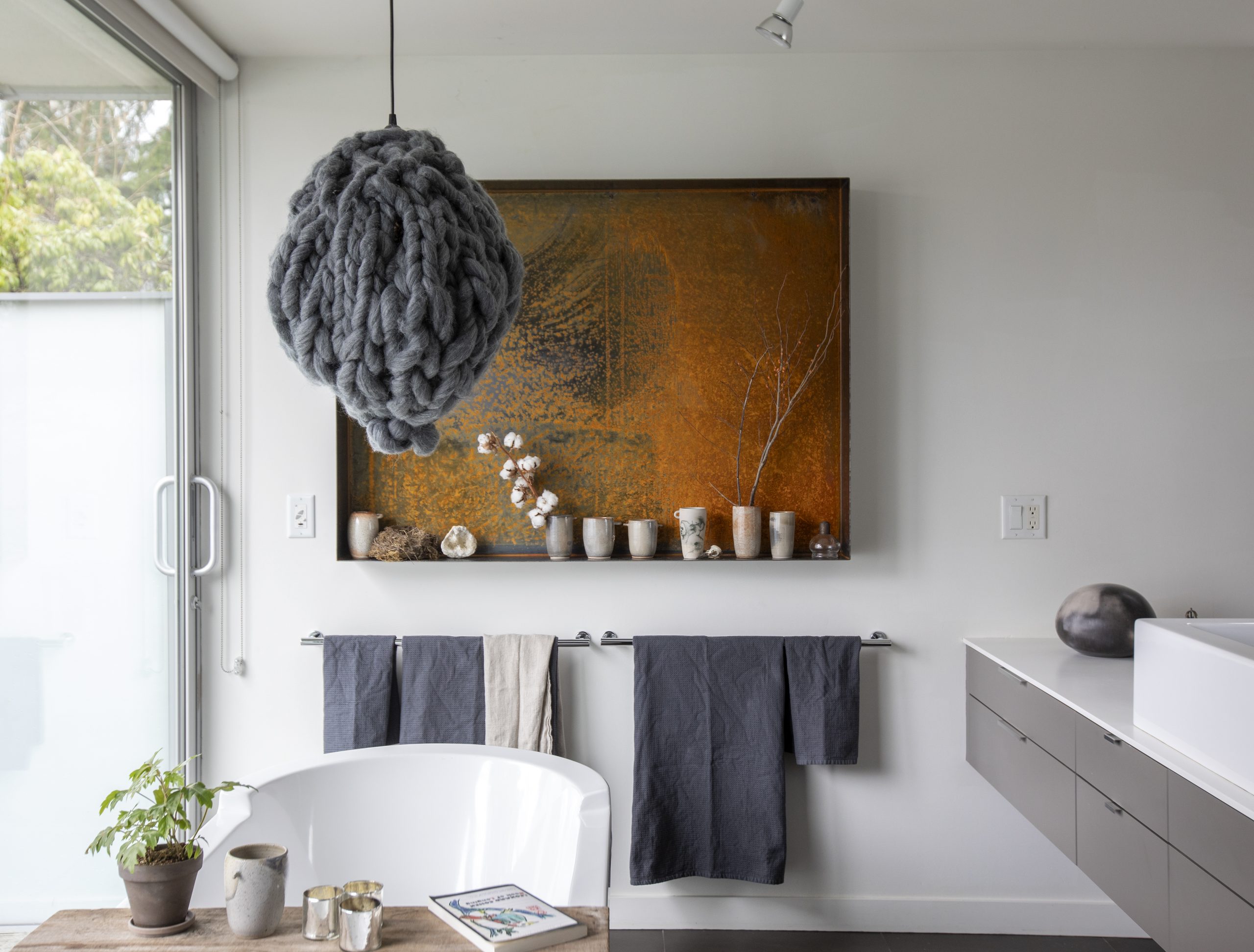 There’s an exquisite sereneness that the master bedroom and ensuite evoke. A platform oak bed frame Cameron built is topped by deliberately wrinkled organic sheets; taupe linen curtains replace closet doors and a simple partition with Creed’s (so apropos ) painting, The Time Inbetween, separates the bedroom from the bathroom area. “Craig is a perfectionist when he builds something while I like imperfection and spontaneity like the art of Japanese wabi-sabi,” she laughs.

One can easily imagine soaking in the Phillipe Starck Duravit Tub while looking out the glass doors onto the private patio’s lone Coral Bark Maple Tree and never wanting to leave! Creed made the rusted speckled metal sculpture by adding vinegar to a steel box. “We get great afternoon light in there and I love the way the box creates more space to play with shadows and light,” she enthuses. 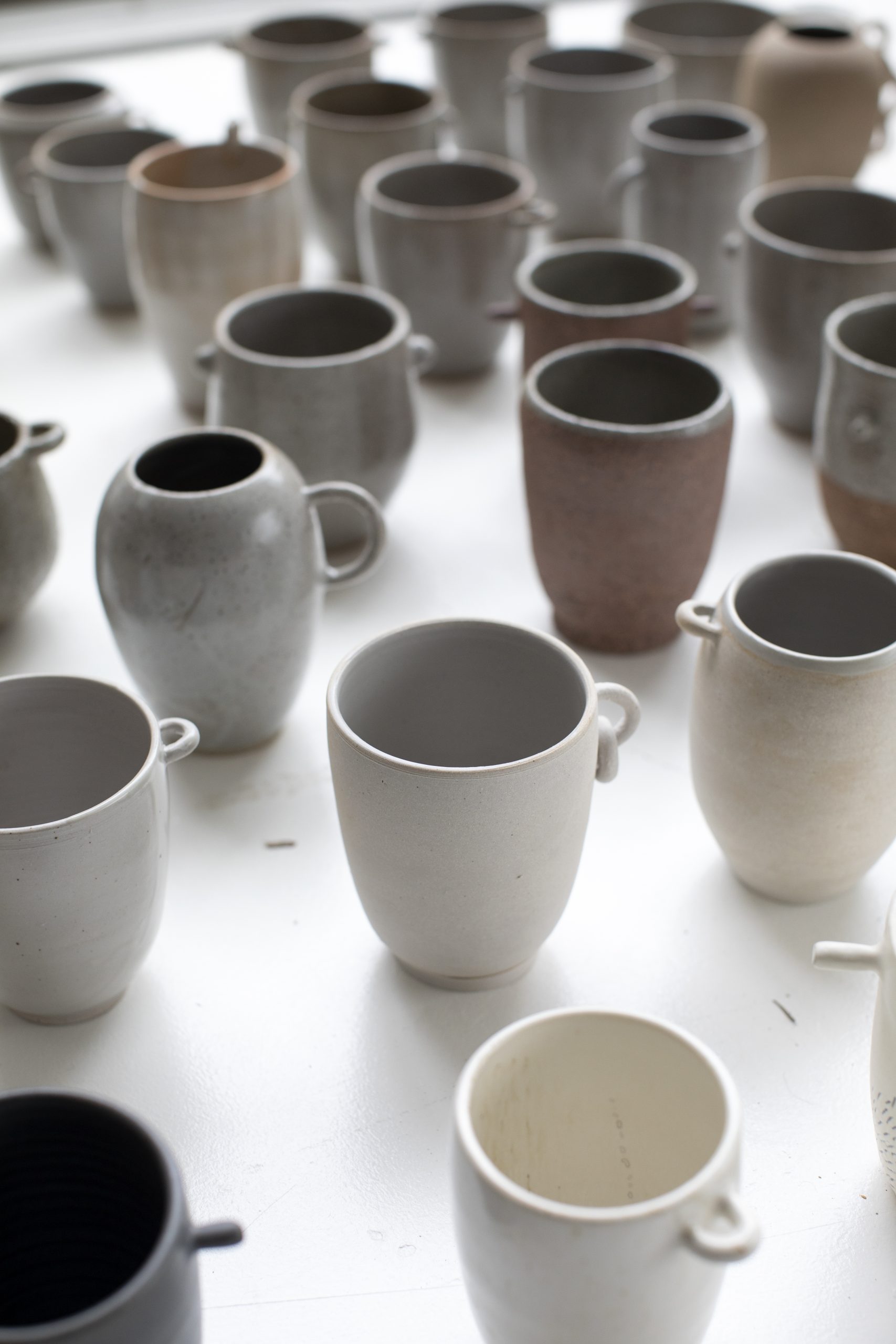 Down a flight of stairs is Creed’s cavernous studio that is almost the full length of her home and overlooks the spectacular garden through a long wall of glass. Dwarfed by floor-to-ceiling stacks of vertically filed canvases in various stages of completion and shelves of contemporary art and psychology books, a small framed photograph of Creed’s late grandfather, Aubrey, watches over her progress from the corner of the studio.

Originally from South Africa, he bought an apple orchard in the Okanagan when he immigrated to Canada. “He was an artist and I still use his easel and paint palette,” Creed smiles, proudly pointing to the well-worn tool, dappled and smeared with hundreds of colourful concoctions. In fact, 15 years ago, she transplanted tree and prune plum saplings from the farm and from other people who were demolishing property which she then planted in this garden. The result is towering greenery that proffers privacy as well as inspiration.

“I love the idea of small intimate spaces on different levels in the garden,” says Creed. “So we divided open ‘rooms’ naturally using the abundant rhododendron and scented camellia bushes, a separate area for growing vegetables, the koi pond, and on the terraced hilltop where the kids used to toboggan down from in the snow, is now a seating area where we will be installing an outdoor firepit.” 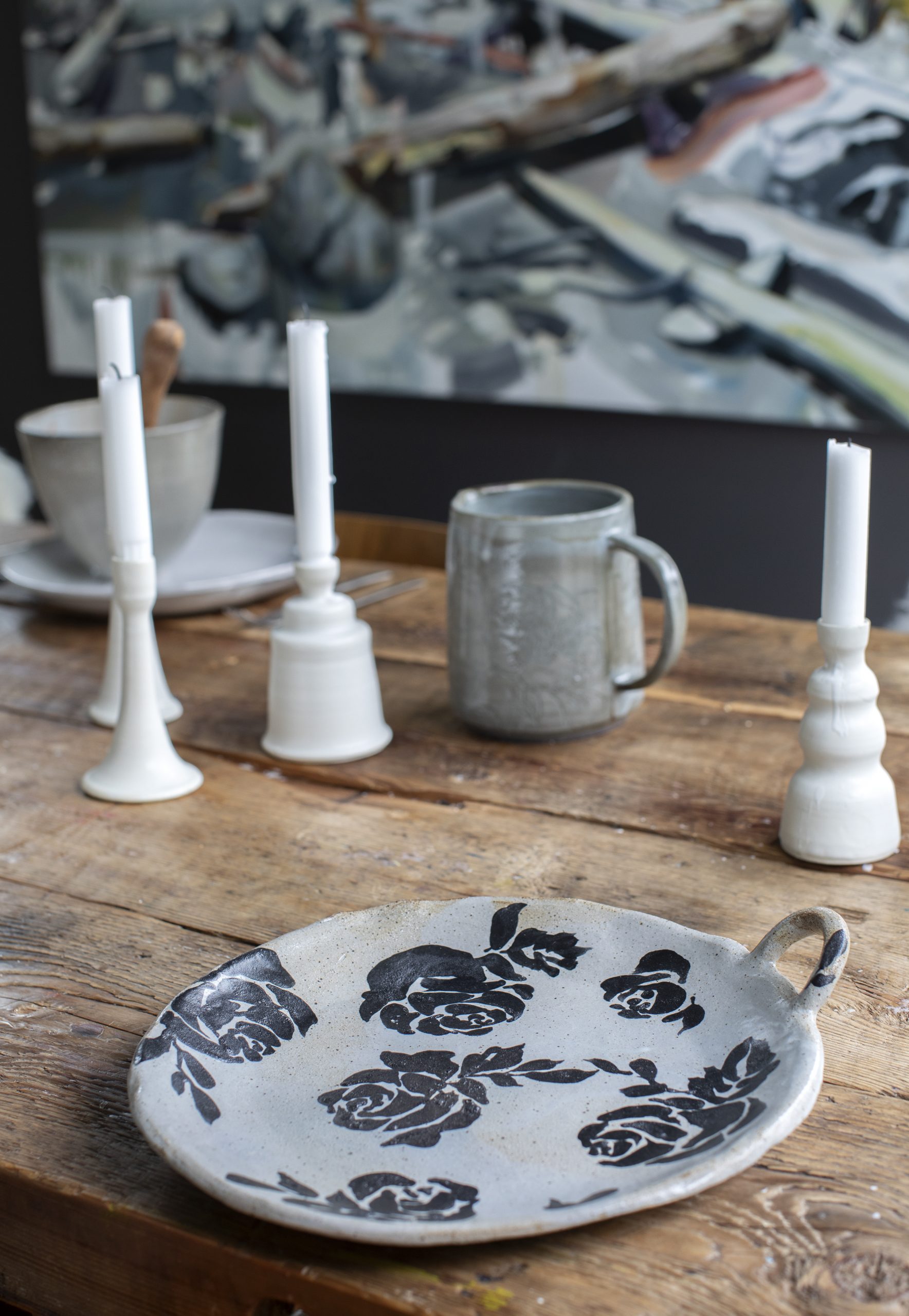 Another space harbours a grapevine-covered pergola where the family gathers for dinners. At one end of the garden is a large whimsical treehouse on stilts built by Creed’s father and Cameron and decorated with fantastical pieces of driftwood.

“Although the kids don’t use it as much as they once did, Levi made a dinner in the treehouse for his girlfriend for Valentine’s Day. I just love that spaces are fluid even if people change with time,” says Creed.