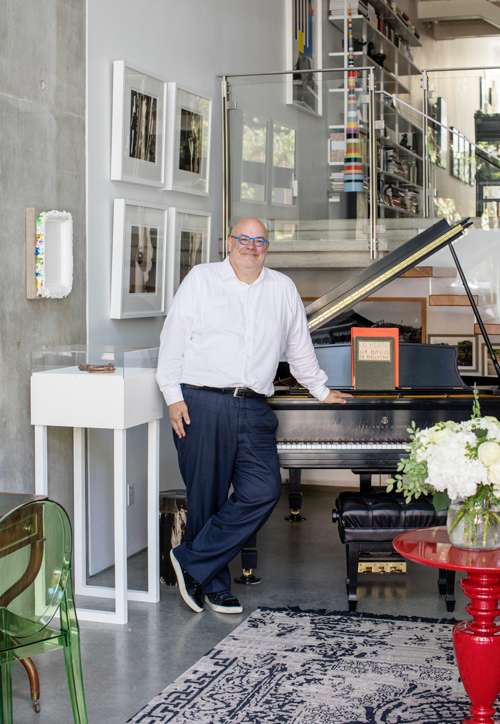 What appears to be silver Mylar helium balloons with Mandarin orange streamers left over from a celebratory party, are hanging from the soaring 30-foot ceiling in Bruce Munro Wright’s front room.

“Those are actually sculptures by Berlin-based artist, Jeppe Hein,” Wright says with a big grin. “It was a real pain getting up there to hang them too, but you know, that’s one of the things that sold me on this house. Where else could I find museum-height walls and ceilings in a private residence?”

Affable, self-deprecating with an encyclopedic memory for anecdotal details, Wright is like a big kid in a candy store – literally. Known as the Choklit townhomes designed by renowned Vancouver architect, Arthur Erickson in 2005 and sequestered behind trees reaching three storeys, the modernist glass and steel townhouse is one of three built across the street from the original Purdy’s Chocolate Company in Kitsilano. “I moved in just two years ago with very few renovations needed,” he explains. 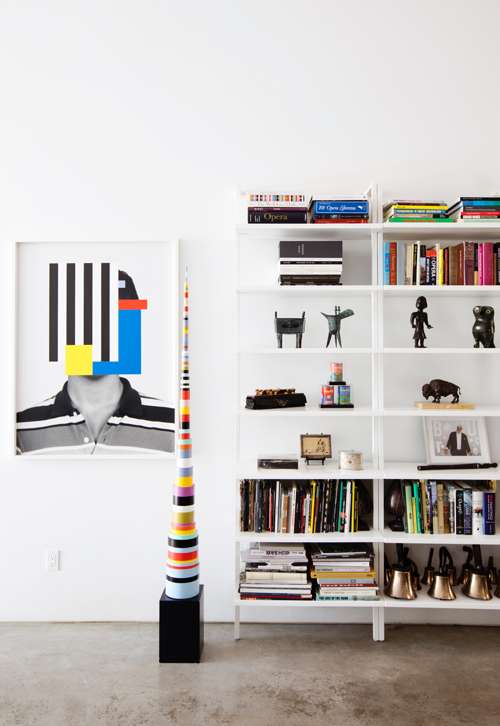 It’s the perfect, tastefully theatrical 2,793 sq.- foot stage from which to view Wright’s eclectic collection of 160 paintings, sculptures, Art Nouveau glass and fascinating ephemera. “I’m an obsessive and serial collector,” chuckles the world traveller, whose greatest joy, it seems, is to host a fund-raising event for the arts in his home each month, that includes performances by concert pianists, singers and dancers

In fact, Wright brings new meaning to the phrase ‘bringing your work home with you’! A partner with Western Canada’s law firm, MLT Aikins LLP, he’s the former Chair of the Vancouver Opera; the Vancouver Art Gallery and currently Chair of Frontier College. He sits on the boards of Ballet BC and the Nature Conservancy. “Dear to my heart is the Health Arts Society and Concerts in Care. The brainchild of David Lemon, Health Arts arranges for paid performances for elders in care facilities in BC and throughout Canada – over 13,000 concerts to date,” he explains. Wright is also Chair of the upcoming Splash Gala in support of Arts Umbrella, that takes place October 14th at the Fairmont Hotel Vancouver. 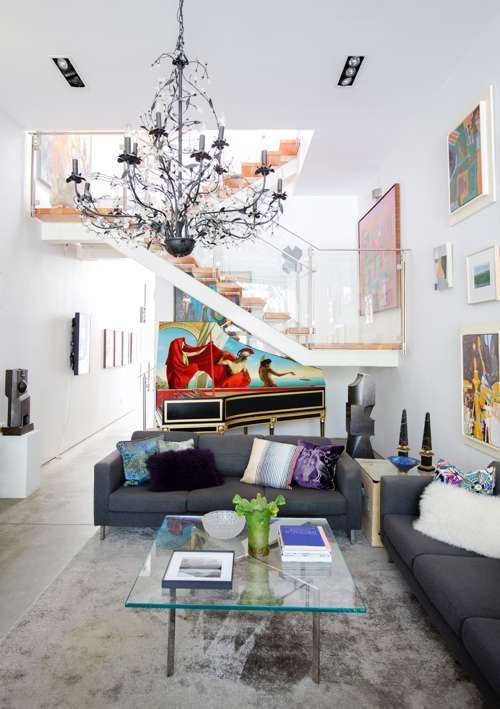 Viewing the home’s cavernous light-filled interior through heavy glass front doors is like stepping into a cathedral of art; floating staircases likened to an M.C. Escher lithograph, lead to higher echelons each with their own dizzying array of art.

Climbing up into the next level of the boxy layer cake, the living room space is dominated by a harpsichord hand-made by Vancouver’s Craig Tomlinson. It’s an exact replica of a 1792 Tasker instrument right down to the wood from the Black Forest. The astounding custom artwork painted on the lid’s inside cover by Marco Tulio, is a scene created from the Purcell opera Dido and Aeneas right before Dido sings her famous lament. “This is the first opera I ever saw when I was a teenager,” the Toronto-born Wright reminisces. 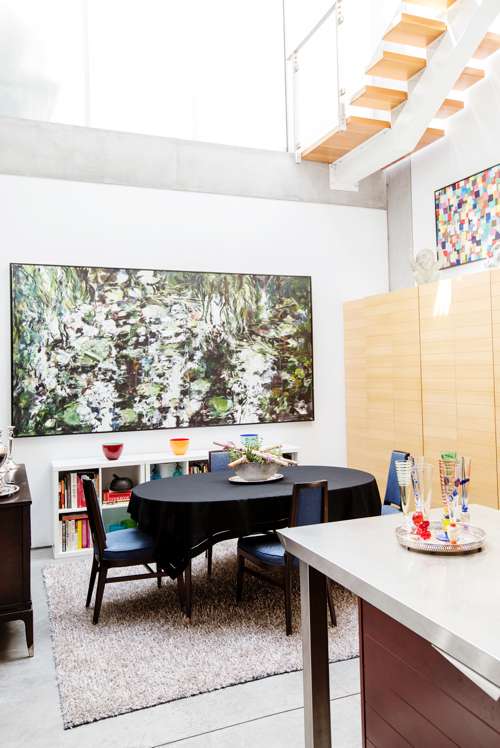 Wright enjoys cooking in the expansive kitchen where light streams through deep 15-foot skylights bathing Jack Shadbolt’s series of monoprints and Gordon Smith’s ode to Monet’s Giverny painted in 1996, in ever-changing hues. He and Smith, a long-time family friend, travelled to England for the opening of Canada House in 2015 and met HRH Queen Elizabeth II. Wright’s fond memories of his family’s farm in Ontario’s Adjala township just north of Caledon, are apparent when he points to an inherited dining table and chairs in the kitchen. A sterling silver tea urn given to Wright’s grandfather, (a director of the iconic Eaton’s department stores in Canada and head of catalogue operations,) adds additional touches of the traditional to an otherwise predominately mid-century modern aesthetic.

Even bathroom walls boast great art and have fascinating anecdotes. In the lower level’s powder room is one of Andy Warhol’s Pop-art Reigning Queens portraits, Queen Elizabeth II. “When I was Chair of the Vancouver Art Gallery, HRH Prince Edward and Sophie visited British Columbia in 2014,” Munro explains. “One of the curator’s and I took Prince Edward on a tour and I happened to mention that I had the portrait of his mother in the loo! He’s a really charming and funny guy and he just rolled his eyes,” laughs Wright. “Coincidentally, in celebration of Her Majesty’s Diamond Jubilee in 2012, the Queen had purchased Warhol’s four screenprint portraits of herself in all four colours for The Royal Collection Trust.” 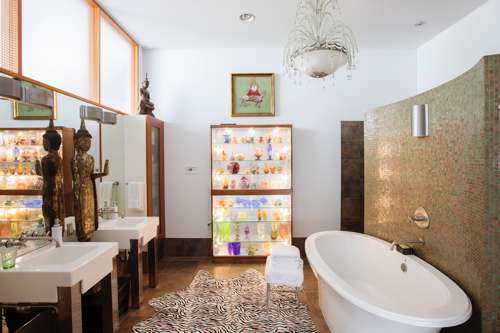 Up 30 steps from the kitchen level (it’s a great workout but Wright is considering installing an elevator,) the master bedroom is a contemplative sanctuary “where I sometimes just relax with a book and a cup of coffee.” Immense floor-to-ceiling sliding glass doors open onto towering cherry trees that are absolutely gorgeous when they bloom in the spring,” he adds.

The Zen-like atmosphere continues in the master bathroom: imagine soaking in the free-standing oval tub and being mesmerized not only by the glittering 1920s Art Deco Parisian chandelier but by Wright’s collection of colourful, antique Daum, Gallé, Tiffany, Loetz, Schneider (Verre Francaise) and Degue glass. “I buy something every time I travel to a major city that has an Art Nouveau connection,” he admits. 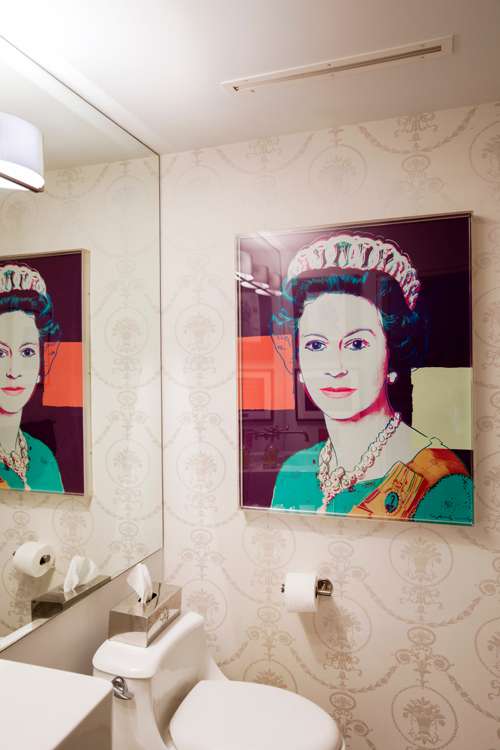 “My main renovation was in the guest room,” Wright explains. A previous owner had split it into two loft-style kids’ rooms and I had it converted into one.”

The pièce de résistance, however, is the jaw-dropping view over False Creek and the mountains from the 60-foot by 60-foot rooftop terrace. “This is the other reason I wanted this house,” says Wright emphatically. “Do you know we’ve had 120 people up here with dancers performing from Ballet BC? And that’s where Bjarke Ingels’ twisting Vancouver House is going up at the end of the Granville St. Bridge,” he points out. Divided by clusters of informal open-concept dining and lounge areas, potted fig trees and dwarf Japanese maples, masses of unruly geraniums, grasses and succulents, it’s a hidden oasis in the city. “I love gardening, usually with a neighbor of one of the other townhouses.”

Says Wright, “You know as much as I love art, I think of myself as just a temporary custodian. I don’t get attached to stuff – only to people and really, that’s how it should be.” 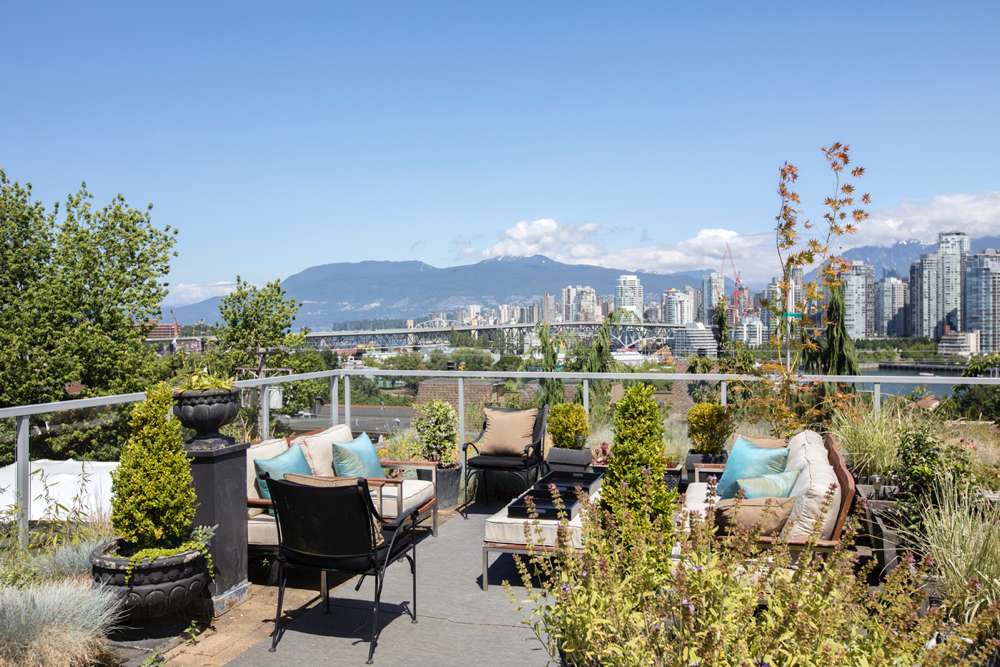